Ben comes off as a relatively optimistic person when it comes to the markets. Can he give us his most bearish or worst-case scenario for the stock market right now? I’m worried the worst is yet to come.

This is a fair assessment.

I am a glass-is-half-full kind of person by disposition.

I can’t prove this but I do think optimism or pessimism is something you’re kind of just born with. I happened to be born a more optimistic person who mostly looks on the bright side of things.1

But when it comes to investing, you also have to balance being optimistic with being realistic. For me that means being a long-term rational optimist with the understanding that things can and will get really bad in the short-term on occasion.

You could come up with something like hyperinflation or a collapse of the dollar of an alien invasion but let’s stick to the more realistic scenarios for the current market environment.

The biggest risk right now is a policy error by the Fed or other central banks. This one also has the highest probability of occurring in my estimation.

My worry here is not based on a misreading of the economic data or anything like that from Jerome Powell and company. It’s more of the human element involved in their decision-making process.

Outside factors can impact our decisions whether we are aware of them or not.

Researchers last decade studied over 1,000 parole decisions by 8 Israeli judges. When looking at the timing of the decisions, the authors of the study noticed a pattern developing in terms of when these convicted felons came before the judges.

Two-thirds of parole requests were granted if they sat before a judge first thing in the morning. But those numbers dropped off big-time right before lunch.

Then miraculously, after lunch, the number of people who were granted parole went right back to 65% or so.

But by the end of the day, almost no one was granted parole.

I’m sure there are a lot of factors at play here but they concluded the judges were more ornery right before lunch because they were hungry. Once they were fed, they were in a much better mood. And by the end of the day they were in a bad mood again after working all day and getting hungry once again for dinner.

We’re all human and so are Fed members.

They’ve been getting slammed by the financial media and economic pundits for months now about how they missed the boat on the inflationary spike and didn’t do something about it sooner.

So I think there’s a real possibility they overcorrect in the opposite direction and go too hard now to try and prove their credibility.

You don’t think we’ll send the economy into a recession to prove a point?! We’ll show you!

Plus I think we’ve learned the Fed is very good at stimulating the economy and keeping the financial system afloat when things are really bad but there is no evidence that they know what they are doing when it comes to hitting the brakes and slowing things down.

Something that goes hand and hand with a policy error would be if interest rates and inflation keep rising or inflation simply stays elevated.

The inflation print today came in stronger than expected.

Sticky high inflation would likely be a bad thing because that would mean the Fed would want to hike interest rates more aggressively.

The other risk here is something out of left field spooks investors.

During a bull market they say stocks climb a wall of worry. It’s much easier to shake things off when stocks are already going up and people aren’t panicking.

The 1990s bull market came to an end in early-2000 after tech stocks took us to nosebleed valuation levels. 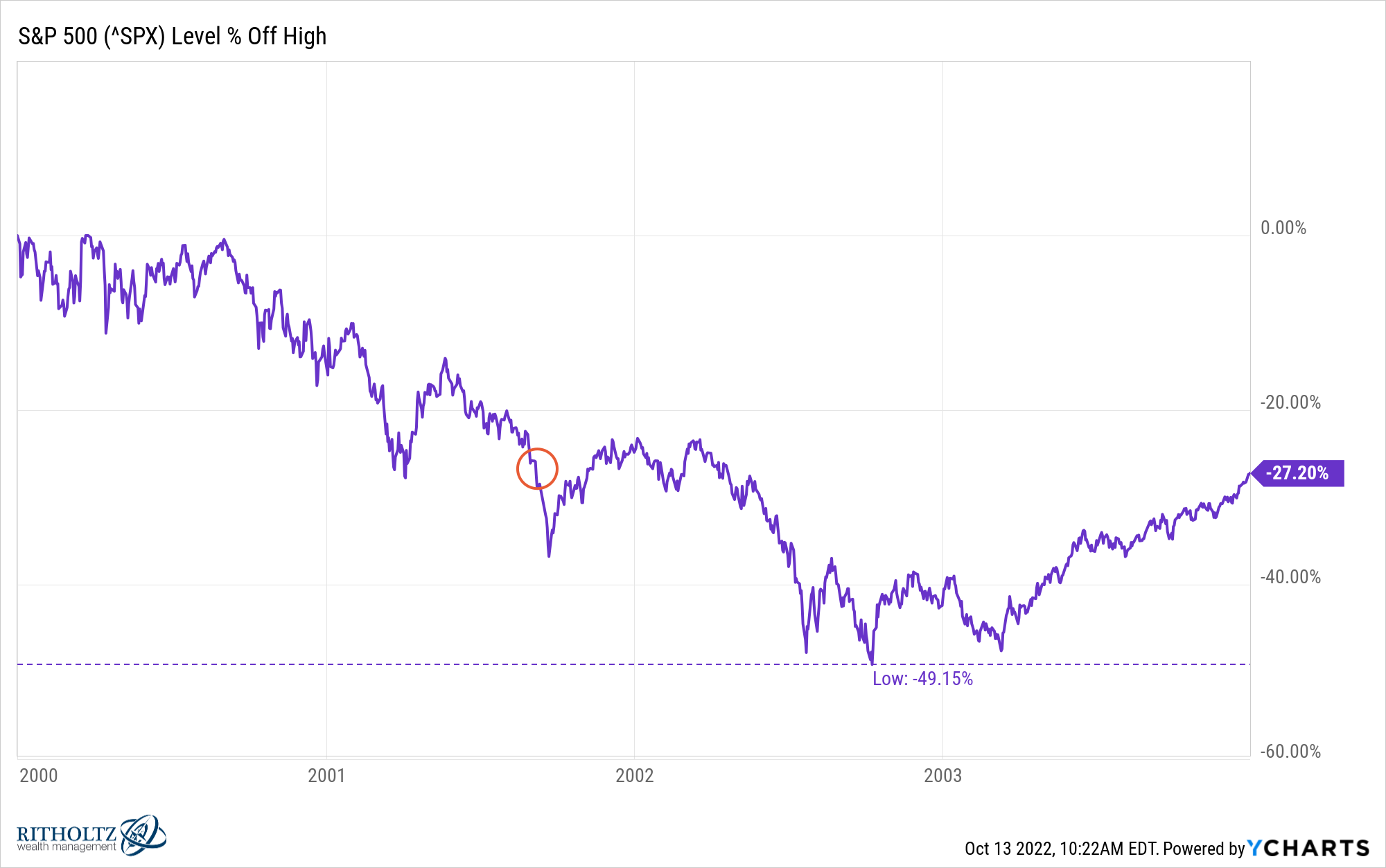 You can see stocks had a lot more downside from there, falling an additional 33% from 9/11 until the bottom in late-2002.

To be fair stocks got hammered right after 9/11 and staged a vicious bear market rally in the months that followed. But you also had the WorldCom and Enron scandals plus a minor recession in 2001.

The point is, it wasn’t just high valuations that did the market in. Stocks were in a downtrend and then came more bad news. Adding even more panic or uncertainty to an already panicky market can make things even worse.

I guess you could say the war in Ukraine was that outside event that made things worse here but anything else out of the ordinary happening from a geopolitical or financial system standpoint probably wouldn’t be great right now.

On the other hand…

…people always assume a Black Swan has to be a negative event.

What if we get some sort of positive black swan that makes things better than expected?

What if inflation falls faster than people think from current levels?

This was the inflation rate the last time the Fed was trying to throw the U.S. economy into a recession the 1980s: 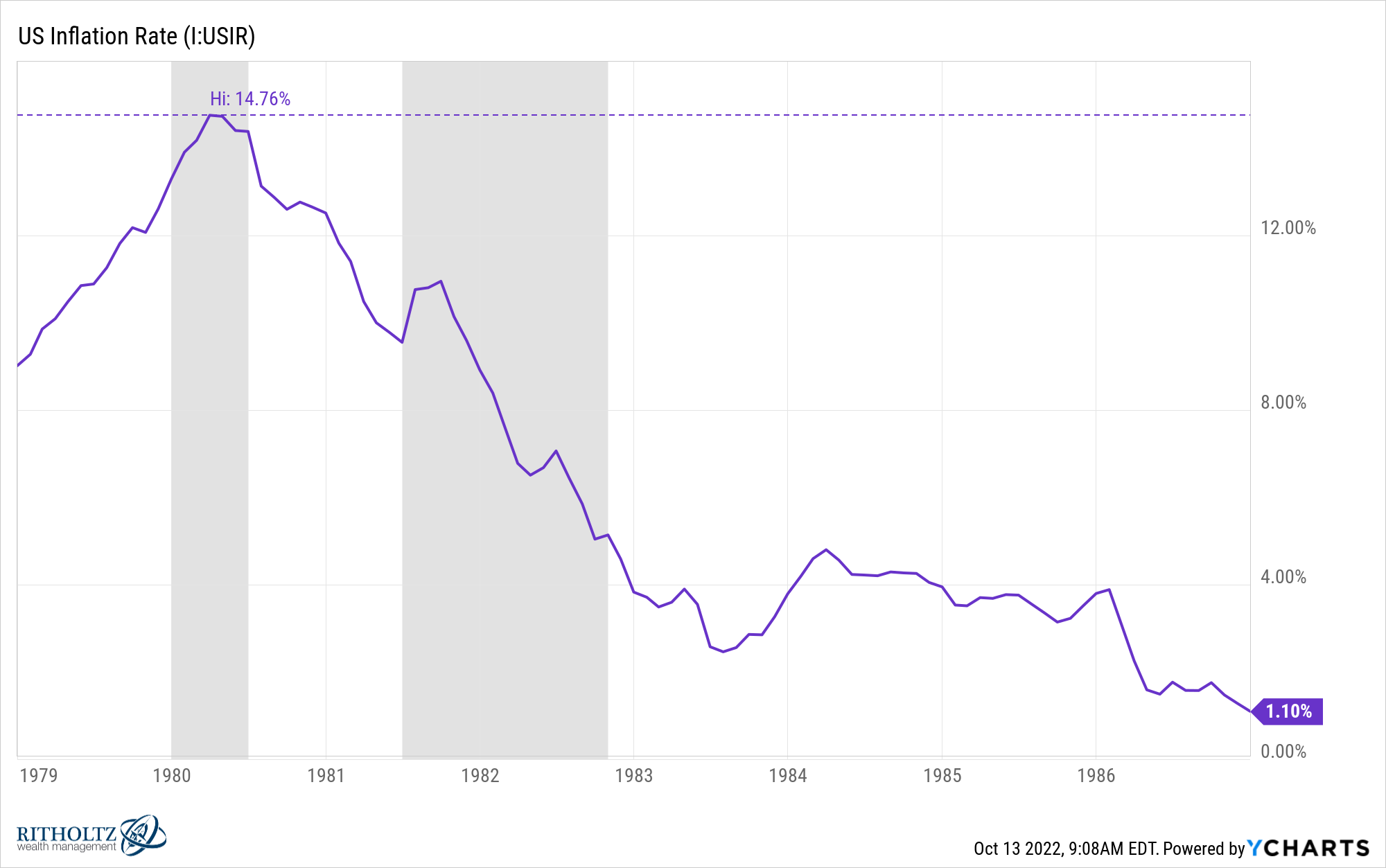 Sometimes the economy doesn’t do what you want it to do right away. It’s more like turning a battleship.

Other positive black swan events could be:

It’s not just good news that causes bear markets to come to an end but better-than-expected news that is simply less bad.

See you knew I had to bring it back around to being glass-is-half-full even when it feels like the glass is empty right now.

We talked about this question on the latest edition of Portfolio Rescue:

1I’m only permanently pessimistic about the Lions and other drivers on the road knowing how to drive correctly.