I’ve been watching The Offer on Paramount Plus recently.

It tells the story of the making of The Godfather, arguably one of the best films of all-time, and how it almost never made it to the big screen.

The show is a tad embellished but it provides an interesting look at the business of movies back in the day.

I enjoyed the Evans character (played by Matthew Goode) in the show so much that I read his autobiography, The Kid Stays in the Picture.

The movie buff in me loved the endless Hollywood stories and name-drops in the book. The finance nerd in me couldn’t help but notice talk of interest rates in the book.

Coppola, Evans and Puzo tried to recreate the magic from The Godfather with a movie called The Cotton Club in the early 1980s.1 A young Richard Gere had signed on to star and all that was left to get the ball rolling was financing.

For months, Puzo and I collaborated on Cotton Club’s written canvas. It was 1982, my f*ckin’ luck! Interest rates broke an all-time high—22 ½ percent. Financing anything was near impossible.

I honestly don’t understand how the economy continued to function with borrowing rates that high.

Of course, the reason it cost so much to borrow back then is because inflation was so high, peaking at nearly 15% in the early-1980s. High inflation caused the Fed to raise rates to nosebleed levels which in turn meant much higher yields for savers. 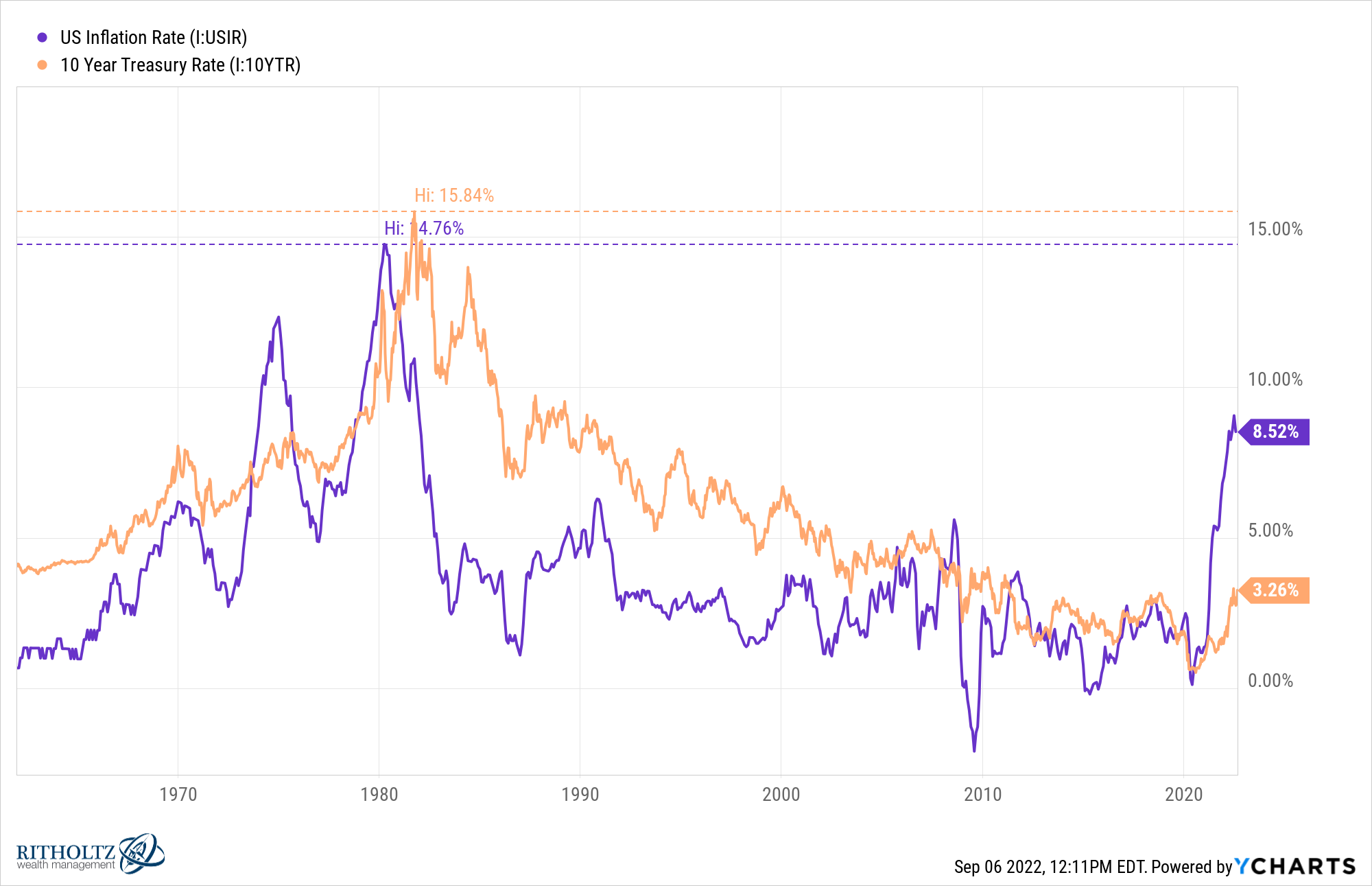 So life was nearly impossible if you were a borrower but savers were earning double-digit yields on their cash.2

Yields were driven so high in the early-1980s that it would take decades for the inflation rate to overtake government bond yields. It didn’t happen again until 2005.

Today we’re in the exact opposite situation where inflation far surpasses bond yields.

At least government bond yields have risen a bit.

For savers at banks, the situation is even worse. JP Morgan put together this chart that shows the average yields on 6-month CD rates versus various inflation measures by decade: 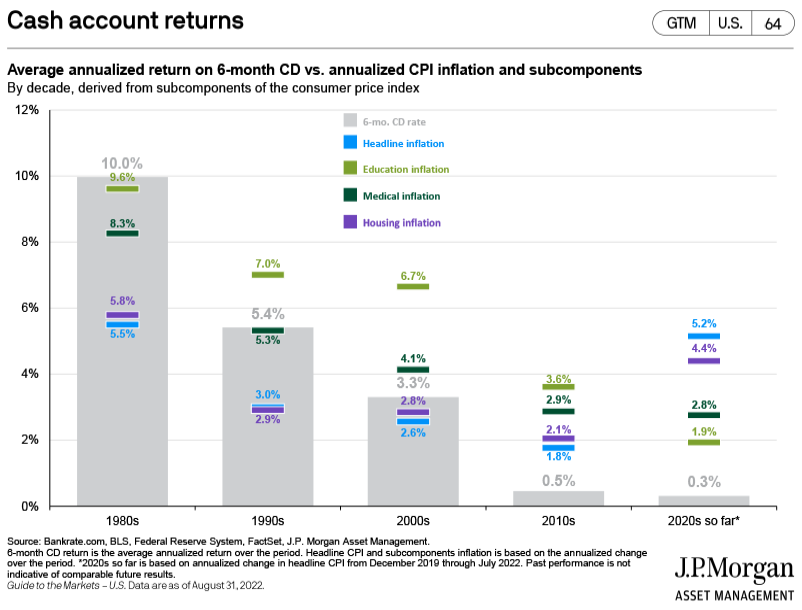 The average yields savers earned in the 1980s were higher than inflation, including education, healthcare and housing prices. Average yields remained above healing CPI numbers throughout the 1990s and 2000s.

However, the 2010s and the start of the 2020s have seen this relationship flip in a big way. Real savings yields have been pushed far into the red through a combination of low rates (2010s) and higher inflation (2020s).

Obviously, neither situation is preferable since everyone hates inflation so much.

On the one hand, it must have been nice from a psychological perspective to see double-digit returns on your cash in the 1980s, even if inflation was eating away the majority of those gains.

On the other hand, higher yields on cash also meant much higher borrowing rates for debt. Just look at how high mortgage rates got back then: 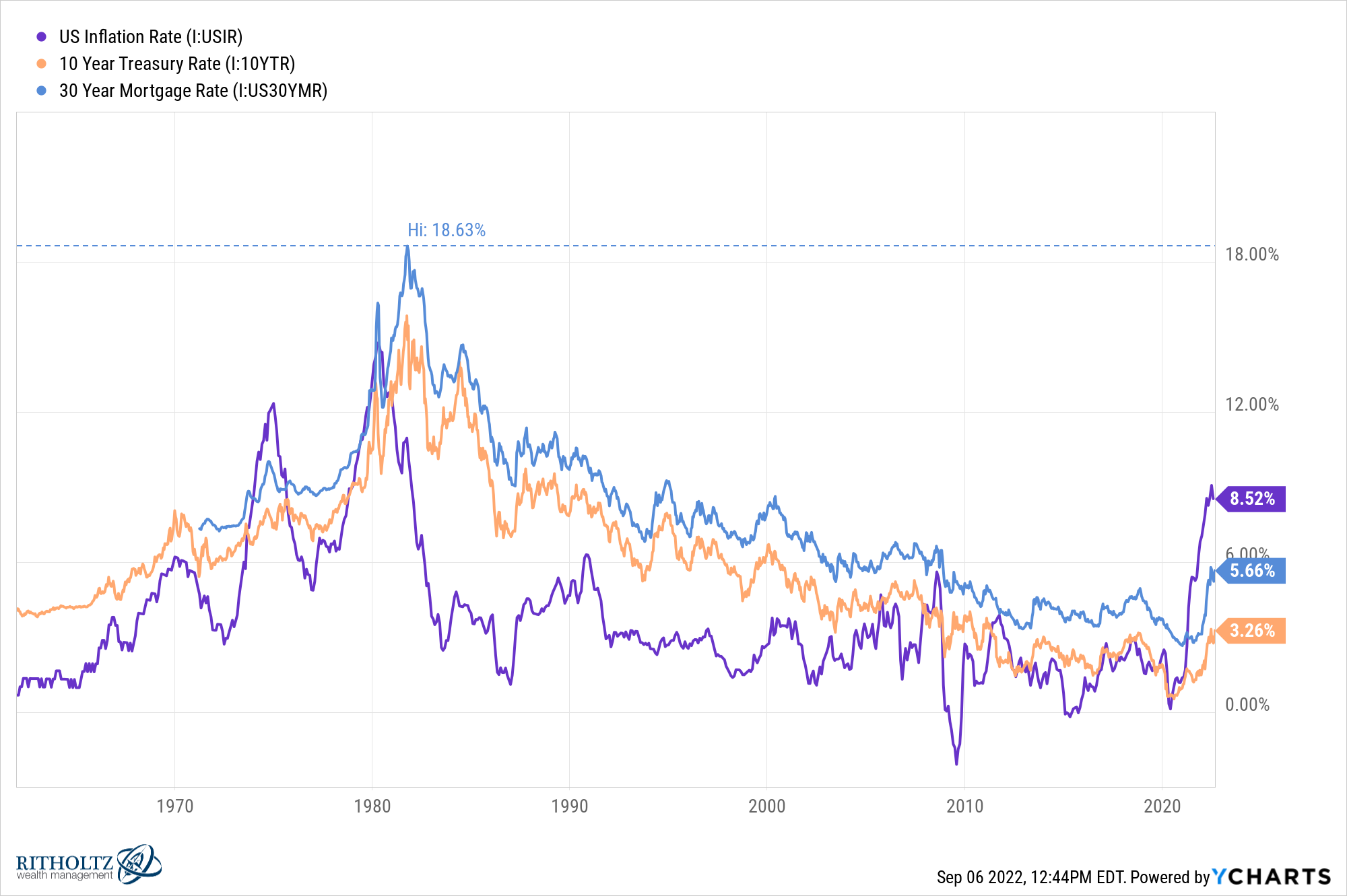 We complain about 5-6% mortgage rates today. I cannot imagine borrowing at 18% for the biggest purchase of your life, even if home prices were much lower in the 1980s.

How you feel about the current situation probably has a lot to do with your circumstances.

Right now people with their money in financial assets are getting punished.

This may come as a surprise, but the bottom 50% of households by wealth are actually faring better than the middle and upper classes in an inflationary environment. This is from Bloomberg:

The group’s [bottom 50%] collective inflation-adjusted wealth grew by 2.8% through the first six months of the year, according to the tracker, developed by three economists at the University of California, Berkeley. By contrast, those in the middle 40% were down 4.9%, while the top 1% — more heavily exposed to the bear market in stocks — lost more than 10%.

America’s working class has been buoyed by outsized wage gains in one of the tightest labor markets in decades. Incomes among the bottom 50%, adjusted for inflation, increased by 1.3% in the first half of 2022, while the middle 40%’s fell by 0.2%. Since April 2020, real income growth for the lower half of the US, at about 45%, has roughly doubled the pace nationwide.

This is a short period of time and inequality remains a problem. The top 10% of households in this country still account for 70% of the net worth while the bottom 90% accounts for 75% of the debt.

That’s not a very balanced economy.

However, possibly the one silver lining for the bottom 90% that has borrowed a lot of money is inflation eating into that debt. You’re earning nothing in your savings account but high inflation is taking a bite out of your debt.

Right now it feels like a lesser of two evils kind of economy.

The gains and losses are never evenly distributed but this cycle has led to some outcomes most people (myself included) would not have predicted.

Further Reading:
Why Housing is More Important Than the Stock Market

1I had never heard of this movie before. It bombed.

2Obviously, real yields were much lower since inflation was so high but you could lock in long-term treasuries at double-digit yields in the early-1980s.