I know a lot of finance people want to blame the Fed for everything these days but central banks aren’t the sole culprit of the inflationary environment we find ourselves in.

The pandemic seriously screwed up global supply chains and the labor market. Governments around the world spent trillions of dollars to keep the global economy afloat while we put things on ice for a while. Consumers began spending money en masse on goods because they stopped spending on experiences and had nothing else to do.

And yes, the Federal Reserve was extremely loose with monetary policy to keep the credit markets functioning and bring the unemployment rate down.

Even though it wasn’t completely their fault, it seems like the Fed is now the only one trying to clean up the inflationary mess by tightening monetary policy.

They’re doing this in two ways:

(2) Signalling to the financial markets they may have to throw the economy into a recession to slow inflation.

The Fed cannot fix supply chains but they can raise rates high enough that it cools demand.

Former New York Fed chair Bill Dudley says one way to do this is through the wealth effect:

In contrast to many other countries, the U.S. economy doesn’t respond directly to the level of short-term interest rates. Most home borrowers aren’t affected, because they have long-term, fixed-rate mortgages. And, again in contrast to many other countries, many U.S. households do hold a significant amount of their wealth in equities. As a result, they’re sensitive to financial conditions: Equity prices influence how wealthy they feel, and how willing they are to spend rather than save.

I get what he’s saying.

They don’t tell you this in the textbooks, but so much of what goes on in the economy and markets is based more on faith, trust and psychology rather than data, fundamentals and statistics.

It would make sense that households who see their net worth plummeting would start to reconsider their financial standing and spending habits.

But I think Dudley overestimates the importance of stock market wealth on American households.

For years we’ve been hearing about wealth inequality and for good reason. The top 10% of households own the majority of financial assets: 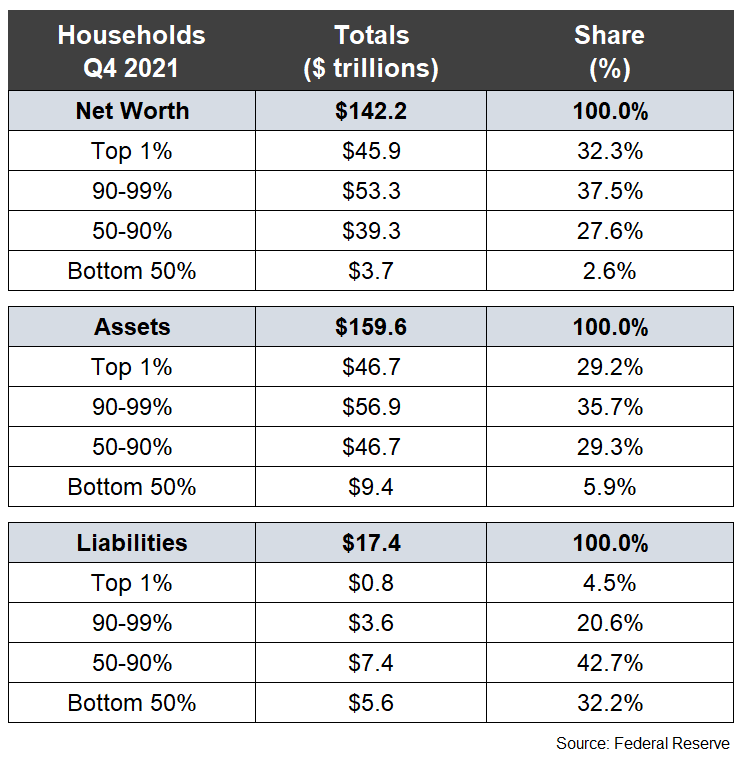 There is a reason for this disparity. The top 10% owns most of the financial assets while the bottom 90% has more of their net worth tied up in real estate.

Look at the breakdown in ownership by stocks and housing: 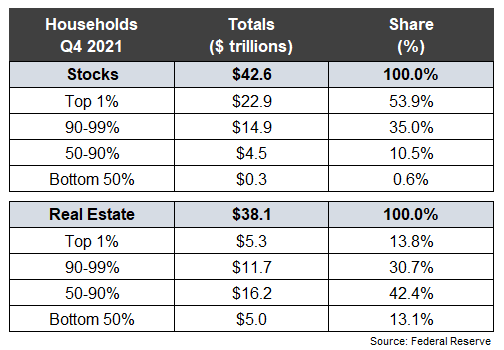 Only 50% of households in the U.S. own stocks in any form. The homeownership rate is 65%.

I would argue the housing market has a far greater wealth effect on households than the stock market does.

The top 10% can live through a bear market in stocks. In most cases, they’ll be the ones buying more shares when stocks fall.

There is a reason the bursting of the housing bubble led to such a calamitous crisis in 2008 — real estate is an essential asset to the middle class.

When people went underwater on their homes starting in 2006, people got wiped out from equal parts leverage, falling housing prices and unsustainable debt loads.

It’s also important to understand how housing wealth has evolved over the years:

At the height of the housing bubble, households had $14.2 trillion in home equity (the market value of housing less mortgage debt).

That number was down to $8.4 trillion heading into 2012. Home equity was almost $20 trillion by the end of 2019 just before the onset of the pandemic.

And one of the few silver linings of the high inflation we’re currently experiencing is that it benefits those in debt. Considering the bottom 90% holds 75% of household debt and the bottom 50% has roughly one-third of all debt, inflation is disproportionately helping the debts of the middle and lower classes.

Listen, I’m not trying to say inflation is a good thing. It’s not. And it is impacting lower income households more than those with higher incomes but it’s not all bad.

Owing banks money when inflation is high helps erase some of your debt in real terms.

CEOs may cut back on hiring or investment in a bear market and there are sure to be tech employees in Silicon Valley who were banking on $6 million in stock options that are now worthless who are going to cut back on their consumption.

It’s not like the stock market falling won’t have any ramifications from a psychological perspective.

But I would be far more worried about the economy if the housing market was crashing instead of the stock market.

The good news is there is now a fairly large margin of safety built into the housing market if we do have a slowdown in the real estate market.

Michael and I discuss the wealth effect and more on this week’s Animal Spirits:

I was on vacation this week so the only reading I did was of the fiction variety: