Every year it provides valuable insights or useful reminders about the importance of a long-term mindset in the financial markets.

These reminders are more important than ever in a society that focuses more on the day-to-day or even minute-to-minute when it comes to the markets.

Here are four reminders from some of my favorite charts in this year’s update:

1. Stocks beat bonds over the long-term. Dimson, Marsh and Staunton give an update of the real returns by country for stocks, bonds and cash going back to 1900:

In all 25 countries studied, stocks beat bonds and cash and by a considerable margin in most cases. And bonds have outperformed cash in every country but one.1

The results aren’t equal across all countries. You can see some had negative real returns, which mostly came from war or hyperinflation in the first half of the 20th century.

But over the long-term, there is a clear relationship between risk and reward. Stocks are riskier than bonds or cash in the short-run so they have higher returns in the long-run.

2. The long-term doesn’t matter if you can’t survive the short-term. Obviously, no one has an investment time horizon of 120+ years.

The distribution of returns gives you a better sense of the range of performance over various time frames: 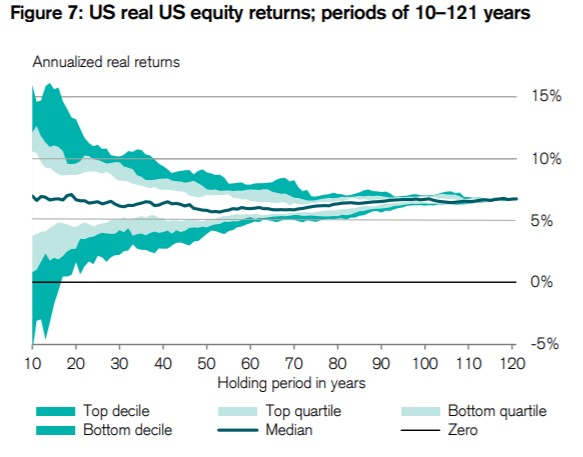 Even 10 years is relatively short-term in the grand scheme of things as you can see from the wide range of real returns over that time frame.2

This is why bonds and cash, while seemingly useless over the long-term, can be essential over the short-term.

This is true for both practical and emotional purposes.

And the emotional use of bonds and cash is having an asset that can dampen volatility, both in your portfolio and in your emotions.

Owning bonds can be a hedge against bad decisions at the worst possible time so you can make it to the long-term with your stocks.

3. Inflation plays a bigger role than you think. Look at the difference in growth between nominal and real returns in both the United States and United Kingdom over time: 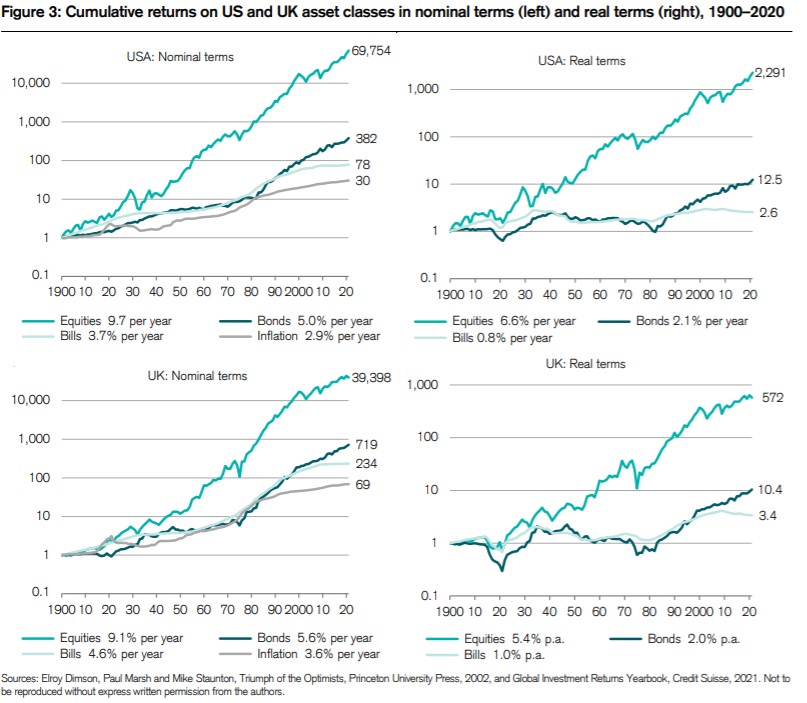 Inflation takes a huge bite out of everything.

This is both the good and the bad of compounding. Over very long periods of time returns in stocks, bonds and even cash can lead to substantial growth.

But inflation compounds against you as well. It’s like an expense ratio that changes over time.

Beyond your goals and dreams, this is the whole reason for taking risk in your portfolio in the first place. You have to if you wish to beat a rising standard of living.

4. Markets are constantly changing. I love this chart:

The United States made up just 15% of global equity markets in 1900. Now look at it — like Pac Man eating the rest of the world.

Britain’s share has shrunk by a factor of six. Germany and France have seen similar slippage. Then you have countries like Japan and China that weren’t even on the pie chart in 1900 but now have the second and third largest market share.

Now look at the sector changes: 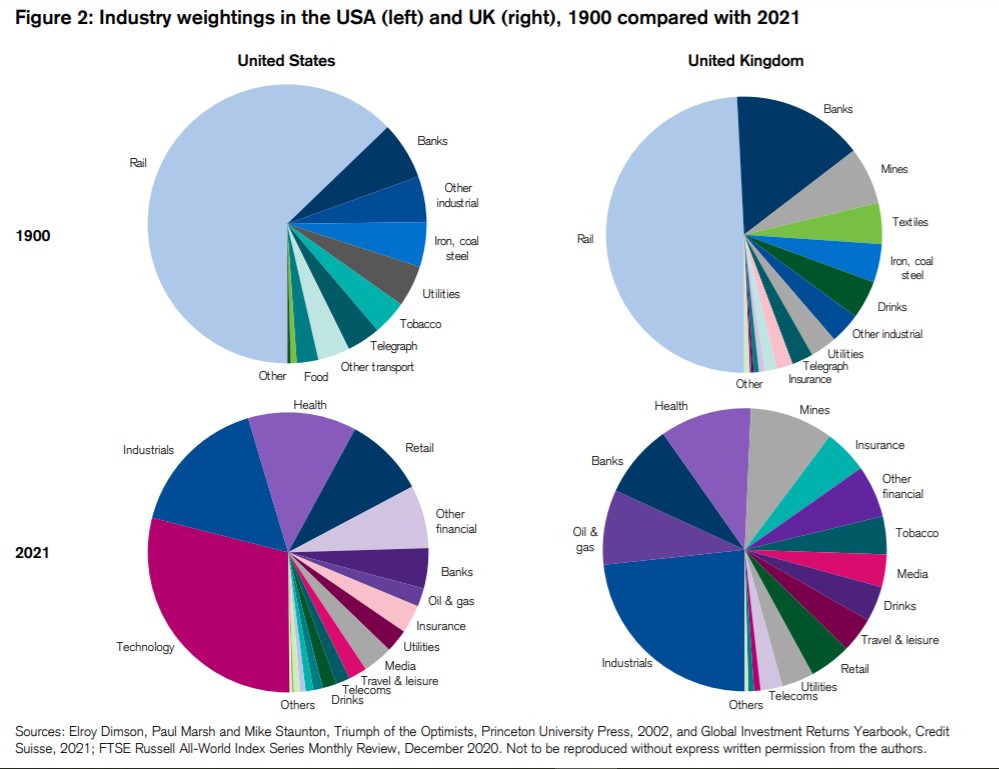 Look at the railroads!

Technology didn’t really exist as a sector in 1900. Now it dominates the market.3

So while the stock market itself remains a great bet over the next 120 years or so I would never go out on a limb to predict what the winning country or sector will be in that time.

Will the U.S. continue to dominate?

Or will emerging or frontier markets step in to take market share?

Will tech hold its place as the king of the hill?

Or will another sector grab the lead because of some huge shift we can’t even see coming at the moment?

This is what makes markets so hard. The general relationship between risk and reward is fairly straightforward over the long-term.

But picking the winners within the stock market will always be easier in the rearview mirror.

Further Reading:
12 Things I Remind Myself When Markets Get Crazy

1Portugal, for some reason.

2Also worth pointing out there were no periods of 17 years or more with negative real returns.

3Which is probably a good explanation as to the reason the stock market in the United States crushed the United Kingdom in the 20th century.