In the midst of the pandemic-induced market panic in March of 2020, I wrote a piece that explained why I was more worried about the bond market than the stock market.

These were the yields on U.S. government bonds at the time: 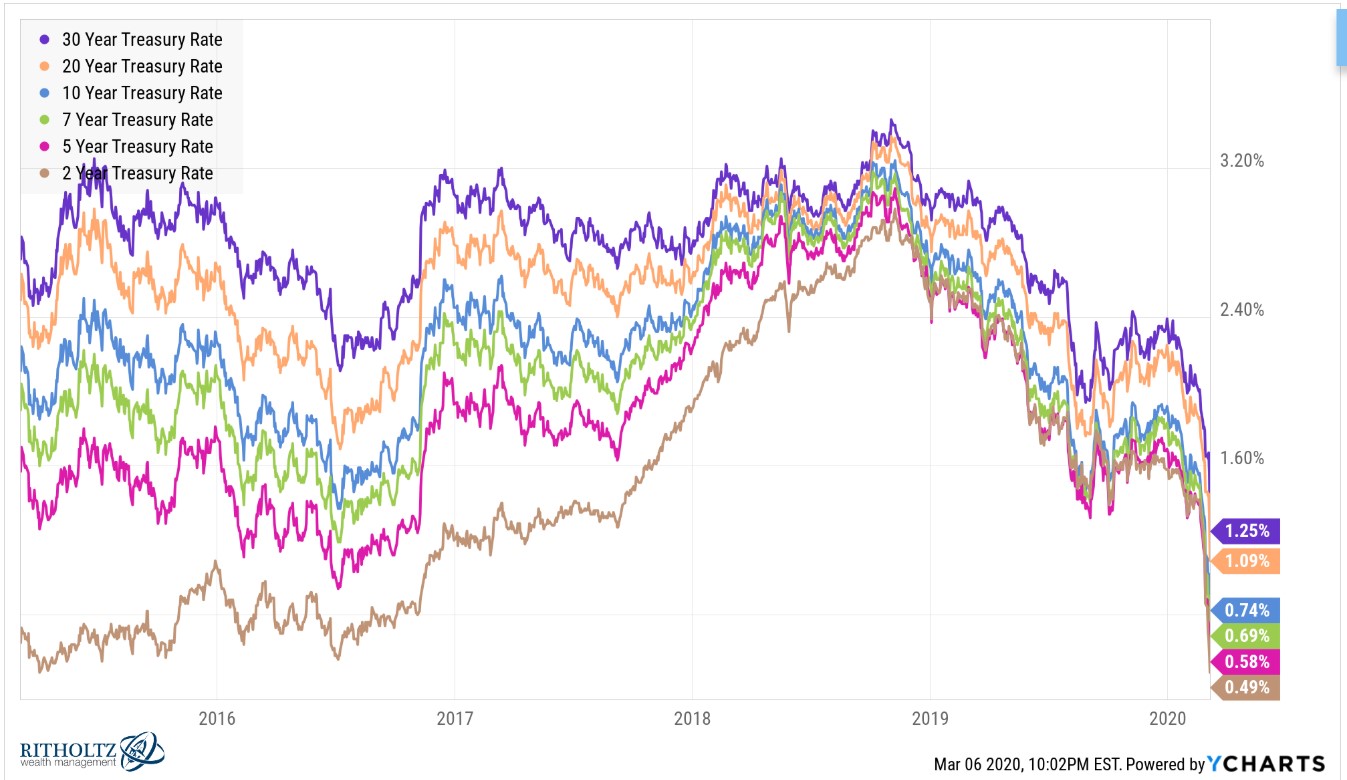 This was a waterfall all the way down moment across the entire maturity spectrum. It may have seemed bizarre to worry about the bond market when these were the trailing returns over the previous 12 months: 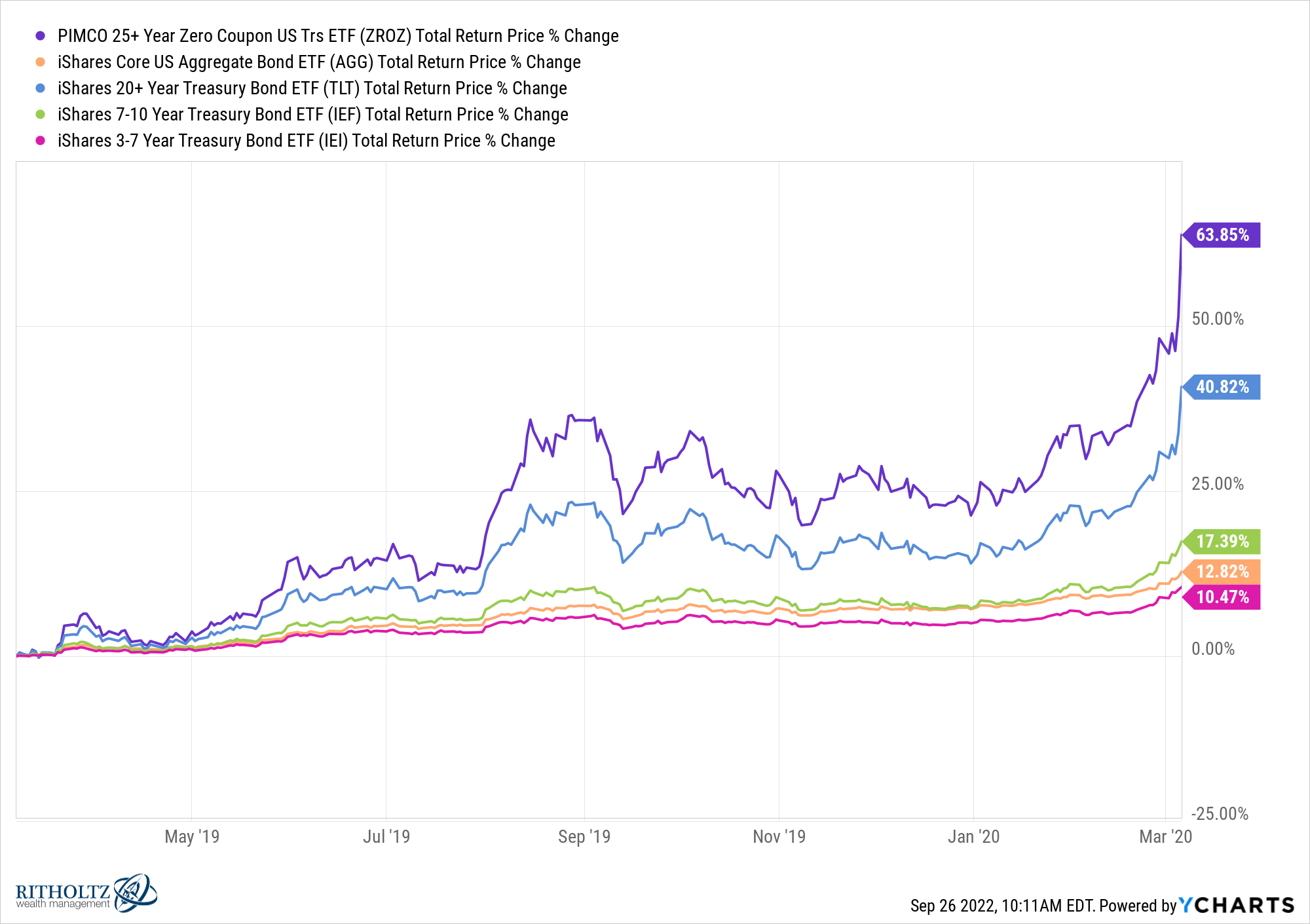 Bonds were crushing it while the stock market was in a free fall.

Here’s what I wrote explaining my worry at the time:

My biggest worry at this moment is forward long-term returns for bonds are now guaranteed to be basically nil. Even a whiff of inflation all but means negative real returns on bonds for the foreseeable future.

That means all high-quality bond investors are now looking at 1% or so nominal returns on their bonds from current levels. Real rates will almost certainly be negative over the next 5-10 years unless we see massive deflation.

The margin for safety in bonds is now razor-thin. Even a small bump up in rates could wipe out years of yield. Expected returns in bonds are as low as they’ve ever been (nominally). It won’t take much inflation to wipe out nominal gains.

Now look at the drawdowns in those same bond funds from when they peaked: 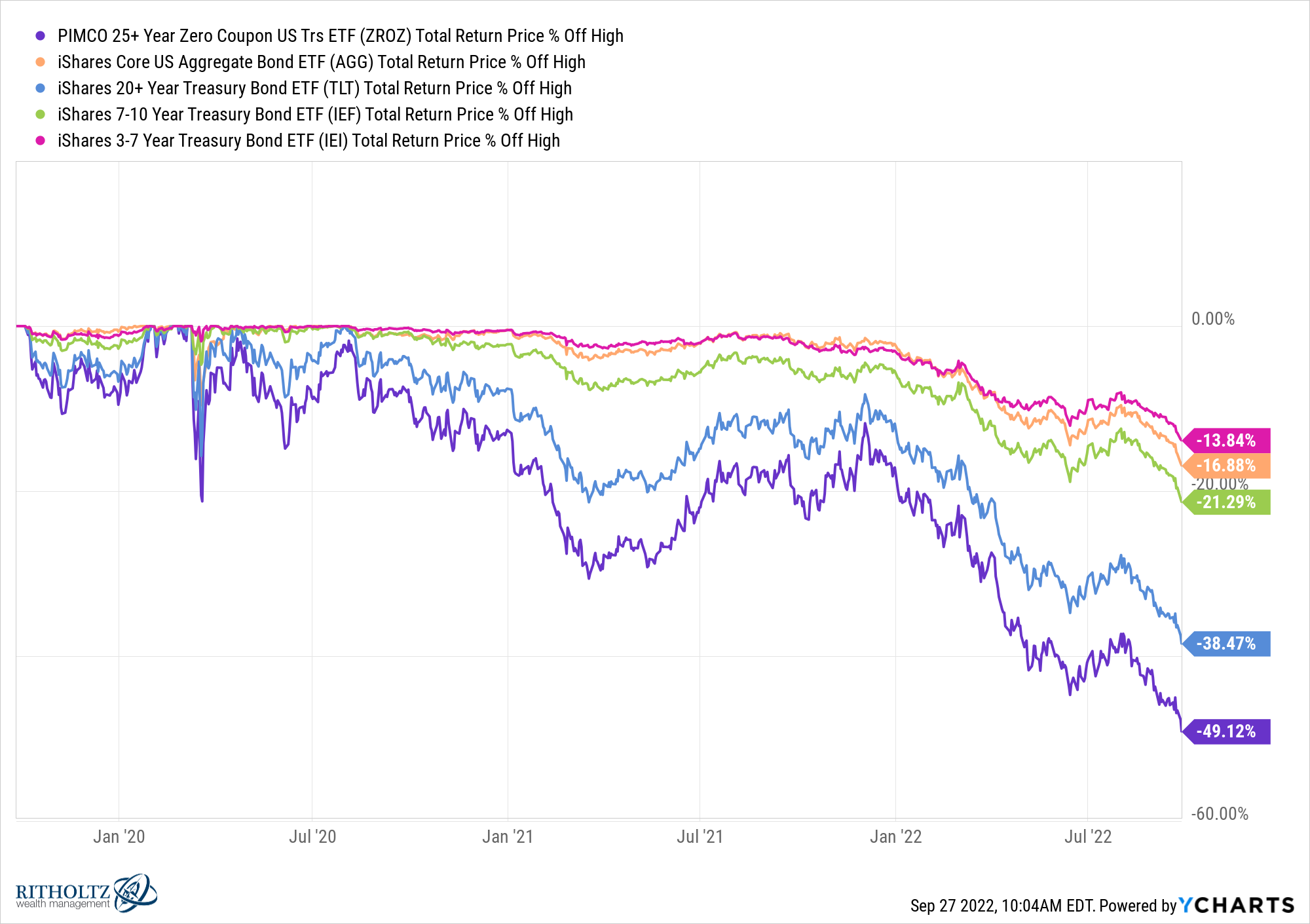 Zero coupon bonds look like a meme stock these past few years.

You could say these losses are simply payback for those impressive gains in 2020 but bond investors are not used to this kind of volatility. Bonds are supposed to be the anchor of the portfolio. They’re not supposed to whipsaw like this.

I certainly didn’t predict inflation to reach the highest levels in four decades or the rapid rise in interest rates we’ve seen this year. But it didn’t take a rocket surgeon to see the future was relatively bleak for bonds back in 2020.

Bonds look much more attractive to me at current interest rate levels: 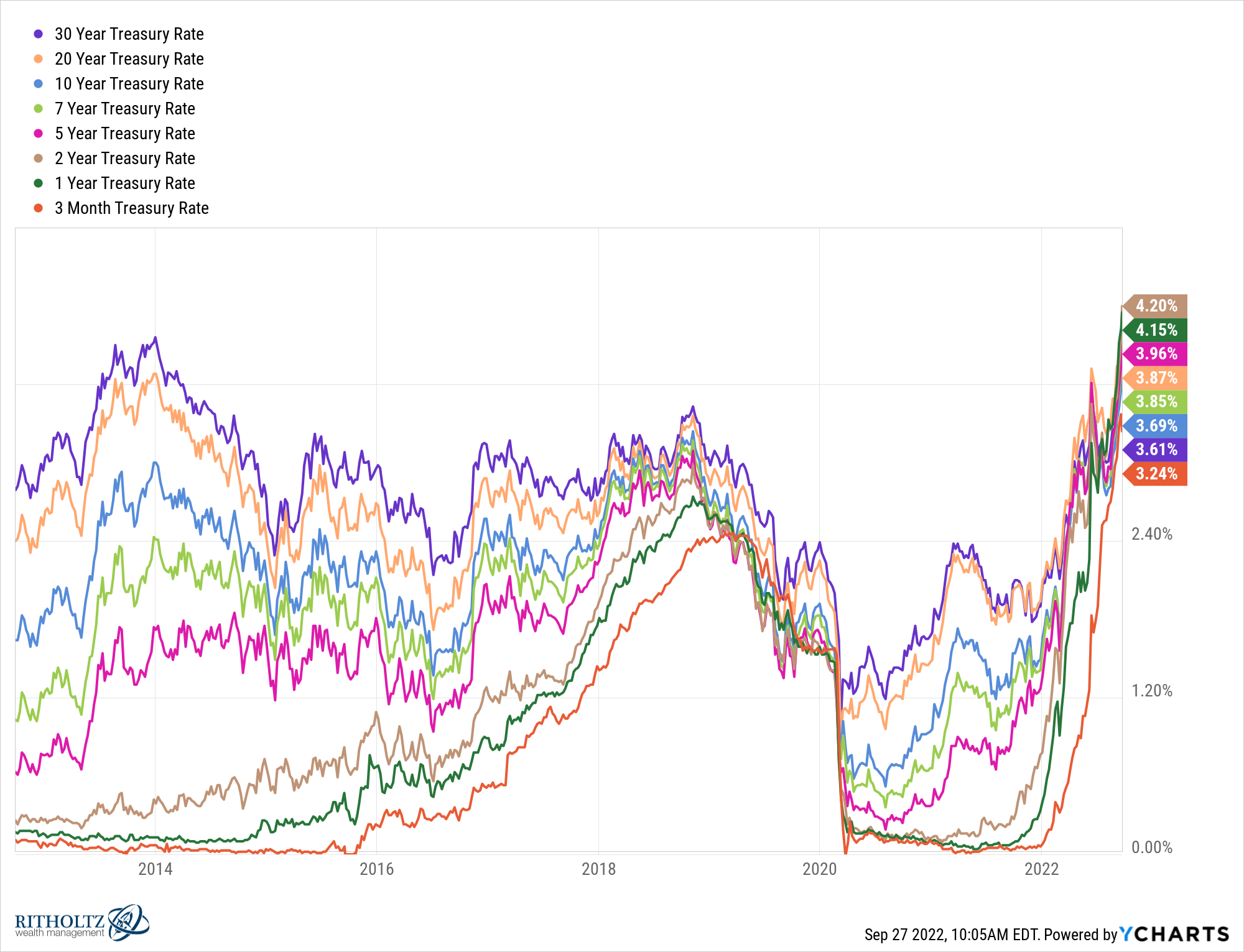 Short and intermediate-term U.S. government bond yields are at their highest levels since before the Great Financial Crisis.

To be fair, these yields are still well below the current rate of inflation but you would expect that gap to narrow as the Fed’s rate hikes begin to slow inflation.

This year will likely end up being the worst total returns for U.S. bonds in history. It’s already one of the worst on record for a 60/40 portfolio or any diversified mix of stocks and bonds for that matter. It’s not surprising many people are once again writing a eulogy for the 60/40 portfolio this year.

But those losses are sunk costs at this point. Investing is about the future, not the past.

And expected returns for bonds are much higher today than they’ve been in a long time when you consider the yield situation.

Let’s say you’ve had a healthy allocation to short-term bonds in your portfolio because you’ve been worried about the prospect of rising interest rates. Short-term bonds tend to hold up much better when rates rise because they are less sensitive to changes in interest rates and you can re-invest in bonds that mature much faster. 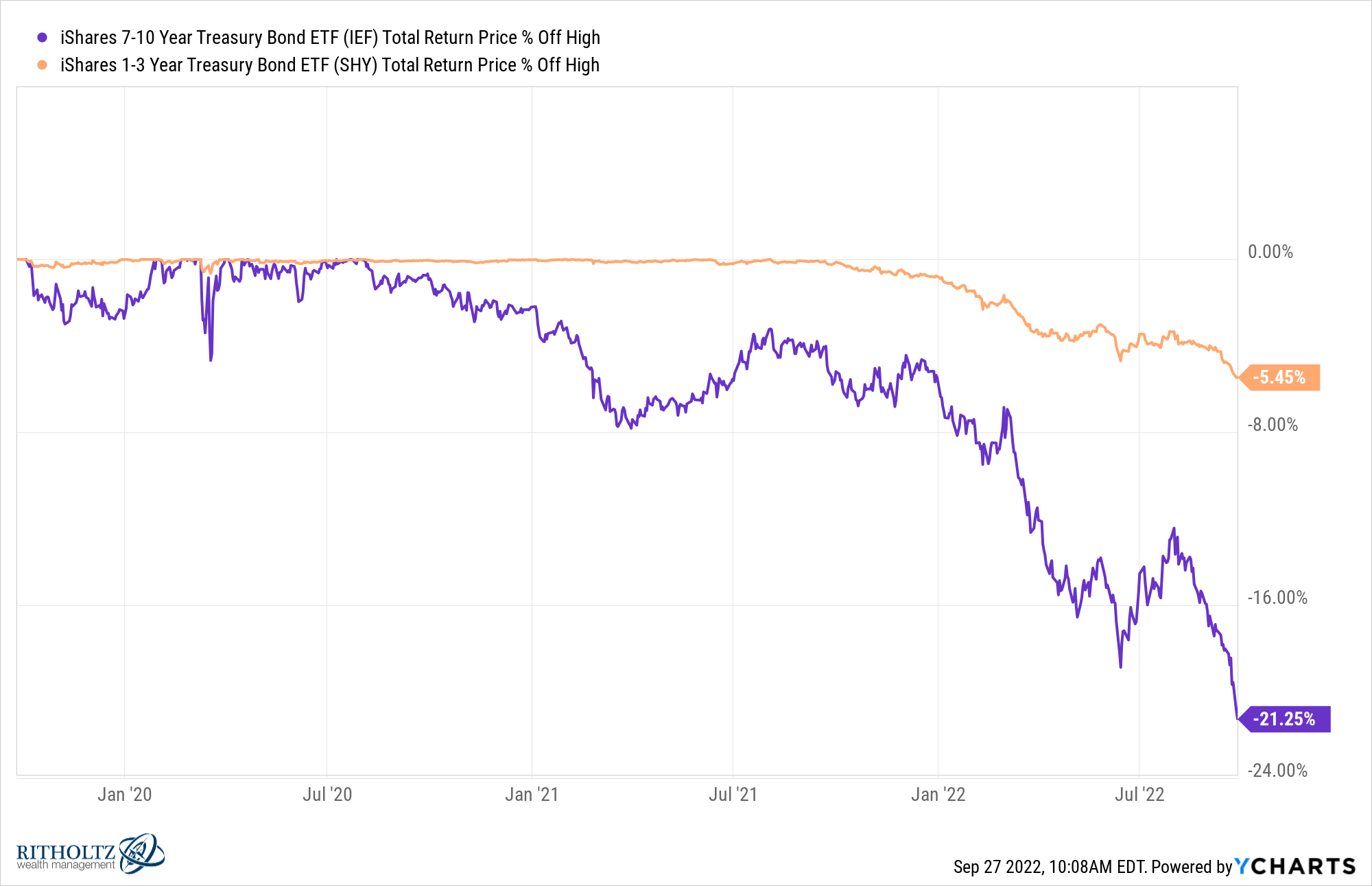 While short-term bonds gave you more protection from a downturn, it’s not like you were being paid to wait…until now that is.

A year ago 1 year treasuries were yielding just 8 basis points. That’s 0.08% for those unfamiliar with finance-speak. The 2 year was just 0.27% while the 3 year was a stone’s throw from half a percent. Not exactly the kind of yield you can live on.

But now look at these glorious yields: 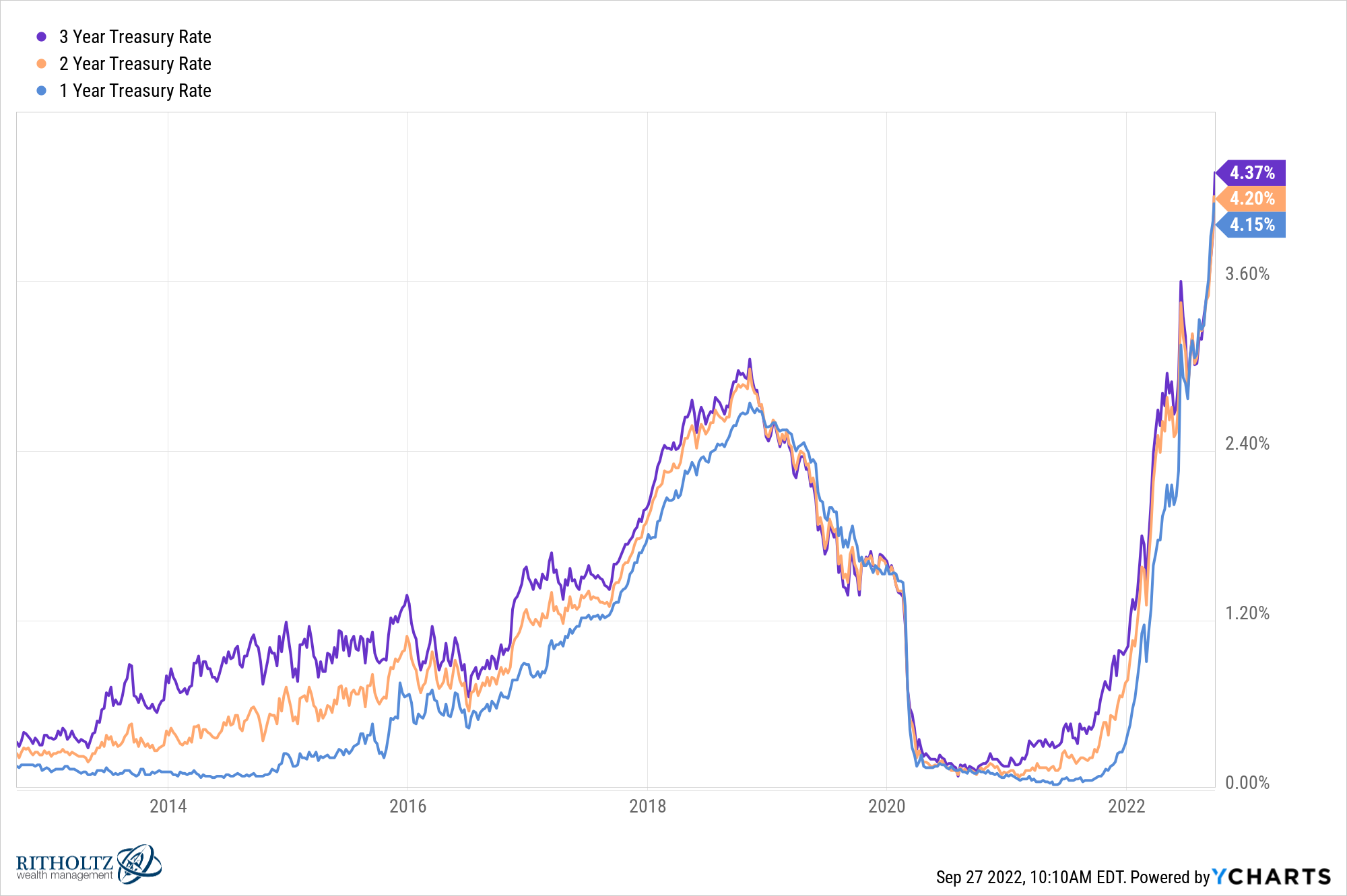 These kinds of yields seemed like they were never going to happen again just a year ago. For the first time in what feels like forever, you can earn actual yield in your portfolio in something that’s relatively safe.

The problem is our brains have a difficult time allowing us to lean into the pain when we see losses.

Back in March 2020 when interest rates were falling to the floor, money was pouring into bonds hand over fist. In fact, in the 10 years leading up to the pandemic, three-quarters of all fund inflows went to bonds while just one-quarter went into riskier assets like stocks. That’s nearly $3 trillion into bond funds in that time.

Now that investors are experiencing some losses, the opposite is occurring. Money is fleeing fixed income.

According to Bloomberg’s Eric Balchunas, we’ve now seen nearly $340 billion in outflows from bonds this year. That’s more than half of the outflows from funds this year alone, meaning more investors are selling bonds right now than stocks.

I understand why this is happening. Lots of investors drive in the rearview mirror. Some people might simply be going to cash because at least cash doesn’t lose money when rates rise.

But you would think some investors would become tempted by the higher rates bonds are now offering.

Could interest rates go a lot higher because the Fed is hell-bent on sending us into a recession? It’s certainly a risk to consider. If rates continue their ascent bonds will continue to see price declines.

But there is definitely a higher margin of safety for bonds when rates are at 4% than when they were closer to 0%.

If the Fed does throw us into a recession one would assume interest rates should actually fall but its possible inflation will remain uncomfortably high, thus keeping a floor under interest rates. Who knows?

I don’t know if there is such a thing as a “normal” yield on bonds anymore but 4% felt like it was more or less impossible just a few short months ago.

I cannot predict the direction or magnitude of interest rate moves. Heck, the Fed sets short-term interest rates and even they can’t predict how they’re going to set them 3-6 months from now.

What I do know is nominal yields for bonds have gone up substantially over the past 12-24 months.

There is finally a respectable yield to be earned on government bonds, corporate bonds, junk bonds, TIPS, I-bonds, and even savings accounts for the first time in a long time.

Expected returns for bonds are finally higher than they’ve been in over a decade.

We just had to endure some pain to get to this point.

Further Reading:
Why I’m More Worried About the Bond Market Than the Stock Market