I started my career in the investment business back in 2005.

If we’re being generous this is my fifth bear market.

I got married and took a new job in the summer of 2007 right as the housing market and financial system were teetering on the edge of collapse.

The S&P 500 would fall more than 56% over the course of 18 months. Small cap stocks fell 60%. Foreign stocks crashed by 62%. Emerging markets were decimated, losing two-thirds of their value.

It’s possible this was the worst financial crisis I’ll ever experience.

Each downturn is unique in its own way but there are themes that run across every bear market I’ve been a part of.

For instance, in every bear market, someone invariably proclaims buy and hold investing is dead.

While it would be nice if buy and hold only required you to do the holding part when stocks are going up that’s not how it works.

Buy and hold assumes you hold during both bull and bear markets.

It only dies for those who don’t have the intestinal fortitude to stick to their investments come hell or high water.

I continue to believe buy and hold is the worst form of investing besides all of the others.

In every bear market, someone makes a name for themselves.

Some pundit, newsletter writer, hedge fund manager or portfolio manager is bound to put on the perfect hedge before the top, nail the absolute bottom or predict the crash ahead of time.

These people can live off those calls for years.

There are still headlines like this more than a decade later:

One right call in a row and you’re set for life in this business.

You know what you don’t hear about on the financial media?

The person that nailed the top but stayed in cash because they became addicted to the crash mentality.

In every bear market, some asset class, strategy or investment doesn’t behave like it’s supposed to. Diversification itself often gets called into question.

In the 2008 crisis it was housing. No one really thought housing could crash on a national basis. It was quite rare but stuff that never happens seems to happen all the time when it comes to the markets.

This time around its bonds.

Bonds are supposed to be the stabilizer, the flight to safety, the anchor in the portfolio when stocks fall.

It’s not normal for both stocks and bonds to go down at the same time.

The worst year for bonds in these four years was a loss of just 5%.

Does this mean diversification is broken?

Or is it possible this is just a bizarre market environment because a pandemic sent interest rates crashing to the lowest levels in history and now they’re normalizing?

I tend to think it’s the latter.

In every bear market, FOMO (fear of missing out) turns into TGINIT (thank God I’m not in that).

Remember all of the if you would have put $10,000 into [investment with a massive return] you would be a millionaire stories from 2020 and early-2021?

Not quite as many of those FOMO tales these days.

Let’s try one just because it’s worth pointing out the other side of concentration. 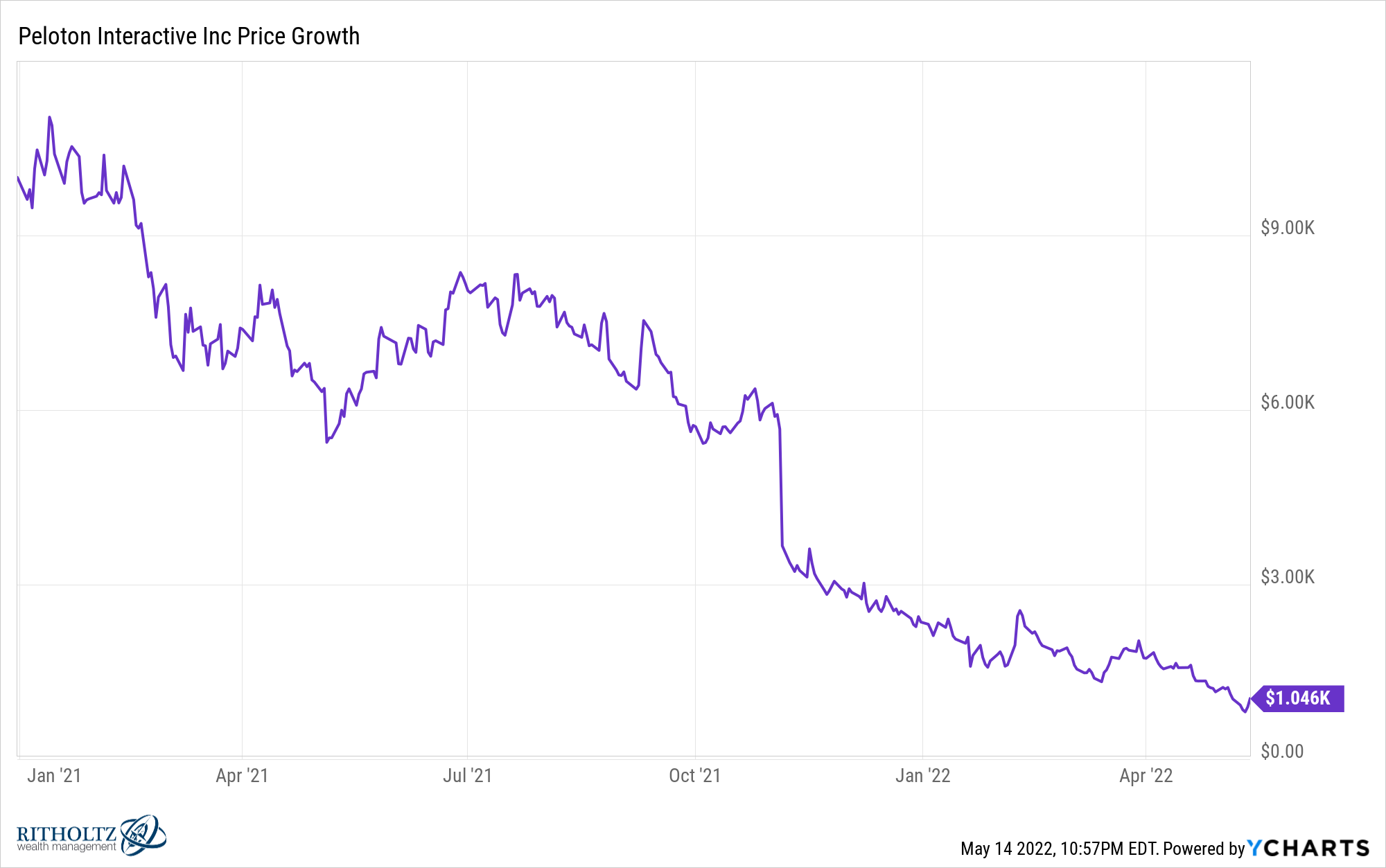 Concentration in your portfolio can certainly make you wealthier if you hit the lottery but it can also make you poor in a hurry.

In every bear market, it feels like the end of the world is near while it’s happening.

The stock market wouldn’t be falling if things were fine.

It’s always this way though.

We’re positioned defensively and plan on using this as a buying opportunity.

In every bear market, someone on financial television says they’re cautiously optimistic.

It sounds smart. It’s hard to be wrong when you’re both cautious and optimistic.

In every bear market, we get some technical analyst who makes a 1987 or 1929 analogy using an overlay chart that makes it look like we’re gonna get the mother of all crashes yet again.

As if two lines on a chart that look similar is a catalyst.

In every bear market, investors quote either Warren Buffett or Mike Tyson.

Everyone has a plan until you are greedy when everyone else is fearful.

In every bear market, investors wish they held more cash.

Just like most investors wish they were fully invested or utilizing leverage during a bull market.

This is one of the reasons I’m such a huge proponent of balance in your investment strategy — just wait long enough and most of the feelings you have about the amount of risk in your portfolio will change based on the market environment.

In every bear market, it feels like the selling will never come to an end.

Every other bear market in history is an epic buying opportunity until the next one.

Then it feels like it’s going to last forever.

4Bonds were down by a sliver in 2018, just a handful of basis point.