As of the close this past Monday the Nasdaq Composite was in bear market territory, down nearly 22%: 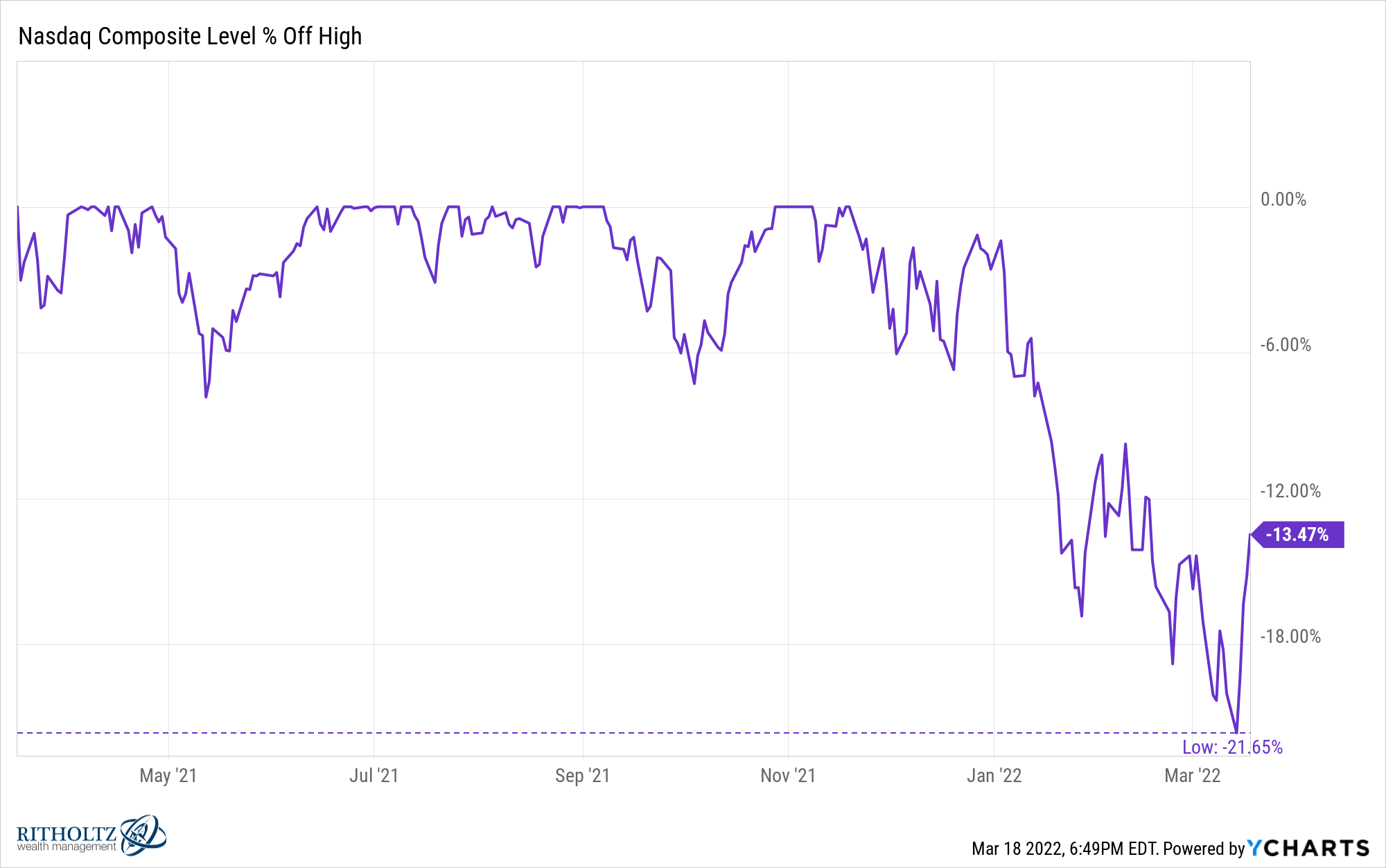 Over the next four days there was a furious rally, with the tech-heavy index up more than 10% from the lows.

That could be the bottom. Or it could be a vicious bear market rally. We’ll see.

By my count, there have been 12 bear markets1 in the Nasdaq going back to 1970 before the current downturn: 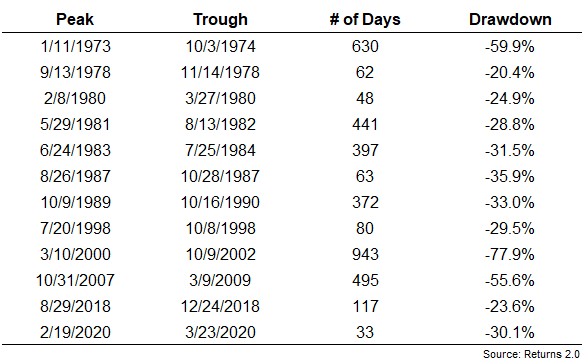 You can see some nasty crashes on this list along with some more run-of-the-mill bear markets.

That applies to the current situation as well of course.

So what if you would have bought the Nasdaq in the past every time it entered a bear market without the foresight to know if it was going to get worse or not?

Let’s say you bought the Nasdaq every time it fell 20%. What would your returns be?

Here’s a look at the forward one, three, five and ten-year returns if you would have bought the Nasdaq right after it fell into bear market territory2: 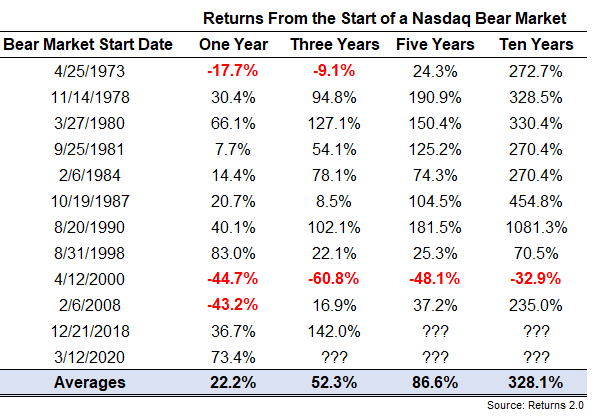 The averages are quite good especially when you consider the fact that many of these bear markets went much deeper than 20% losses. This is what happened after the initial 20% flush: 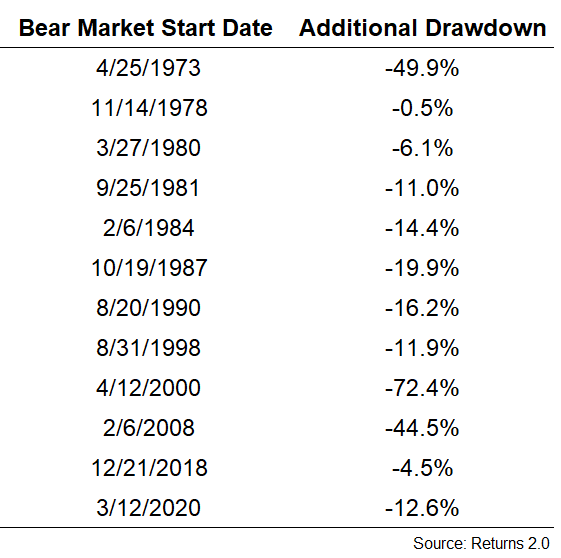 Even though returns were good in most cases there were those crashes that lasted much longer than most investors have the stomach for.

Returns were still negative one and three years out following the 1973-1974 bear. And you would have still been down one-third on your investment ten years after the dot-com blow-up. And that was after it had already fallen 20%!

Some thoughts on this data:

Buying when stocks are in a bear market is generally a good strategy. Newsflash — buying stocks when they’re on sale tends to be a winning strategy over the long run.

Even if you have to eat some further losses, buying stocks after they have already fallen 20% has led to nice returns historically.

I know every correction feels like it’s going to be the end of the world, but most of the time the world does not in fact come to an end.

Nothing works all the time. Most of the time when you buy stocks when they are down quite a bit, your forward returns are good. However, sometimes investors need to be reminded that risk can mean years of awful returns in stocks.

During this same decade, the Nasdaq was down more than 41%. That’s an entire decade where investors got annihilated.

It’s hard to know when it will happen, but extraordinary performance in the stock market is often followed by awful returns.

If there were no risks involved in buying stocks there would be no rewards.

Maybe this is like the end of the dot-com bubble but maybe not. I know a lot of people who feel the run-up in tech stocks in the 2010s was eerily similar to the 1990s blow-off top that less to the massive losses that started at the turn of the century.

Maybe the 2020s will see another prolonged bear market that leads to a lost decade.

It is worth noting the returns of other asset classes the last time we had a lost decade: 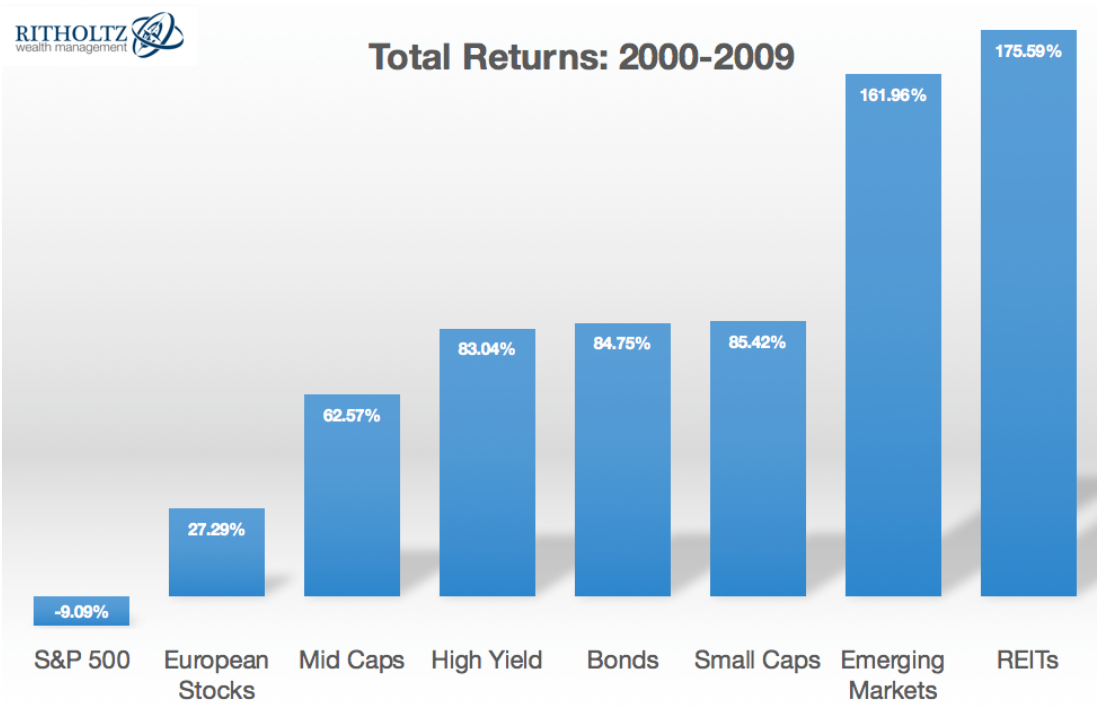 The Nasdaq may have another lost decade upcoming. Maybe the S&P 500 will too. There could be a stock market somewhere around the globe that goes nowhere for decades like Japan since the late-1980s.

It’s not the answer most investors are looking for but we simply do not know when long-term risk is going to show up in certain segments of the stock market.

The only answer I can come up with to prepare for these types of risks is diversification.

1You could quibble with my number of bear markets here. There were a number of rallies and additional drawdowns following the 1973-1974 bear market and the implosion of the dot-com bubble in 2000. In fact, the Nasdaq didn’t hit the 2000 highs again until 2015. Sometimes with these definitions we’re splitting hairs.