Just 35 years or so after the Wright Brothers took their first flight at Kitty Hawk, the United States was already using fighter planes in a big way at war.

But after World War II, the U.S. Air Force was beginning to have problems with this new game-changing technology. Planes were now so fast and complicated that pilots were having trouble controlling them.

They were crashing all over the place for inexplicable reasons.

The military first assumed it must be pilot error but further investigation into the problems led them to look at the design of the planes themselves.

You see the initial cockpit for most of these planes was designed in the 1920s. Surely, the dimensions of fighter pilots had changed since then considering how many more people there were in the Air Force following the war.

So they commissioned a study based on the measurements of more than 4,000 pilots using 140 different dimensions of size (hands, legs, arms, inseam, etc.). They assumed building a better cockpit that took these measurements into consideration would help stop so many crashes.

The lieutenant they put in charge of taking these measurements was a young guy by the name of Gilbert Daniels. Daniels took the data of the more than 4,000 pilots studied and looked at the 10 most relevant measurements for a cockpit.

The idea was to come up with the average size of an Air Force fighter pilot to help design a better plane. Yet when they compared each individual pilot to the “average” pilot from all of the measurements, Daniels discovered made a shocking discovery.

His fellow researchers assumed the majority of pilots would be well within some range of average while a number of pilots would surely hit on all 10. But when comparing the average to the actual dimensions there were exactly zero pilots that fit the bill.

Not a single fight pilot out of more than 4,000 was the average of everyone.

Some had long arms but short legs or vice versa. Others may have had a stocky upper body but skinny legs. Or maybe a thick neck bit small wrists.

In his book1 that was published based on these findings, Gilbert wrote:

The tendency to think in terms of the ‘average man’ is a pitfall into which many person’s blunder. It is virtually impossible to find an average airman not because of any unique traits in this group but because of the great variability of bodily dimensions which is characteristic of all men.

Any changes geared towards the “average” person were doomed to fail because the average person doesn’t exist. His recommendation was to make the cockpits more adjustable to the individuals, not the other way around.

So the military eventually helped design planes that were adaptable to the individual in many ways in which we now take for granted — adjustable seats, straps that could be loosened or tightened, foot pedals that could be moved higher or lower, etc.

Making adjustments was the only remedy that made sense in a world in which the average doesn’t apply to any individual.

This past week the U.S. inflation rate hit its hight level in 40 years at more than 7%: 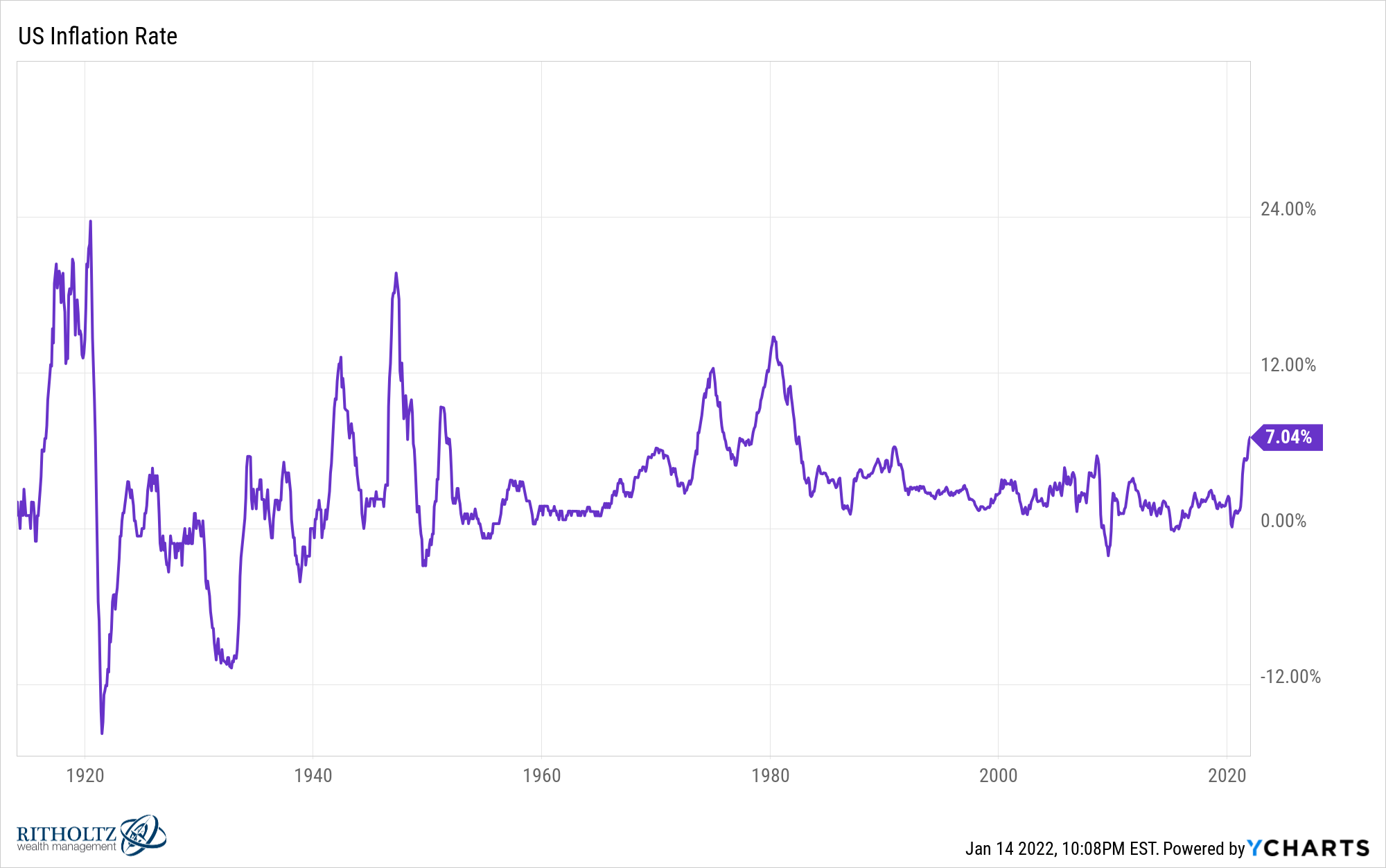 Whenever we get an economic data release for such an important gauge of the economy, we can now look under the hood to better understand the composition of the headline number.

With inflation rising over the past year or so, there has been more attention paid to the individual components to see what’s driving higher prices.

One thing is for sure when it comes to the inflation rate — no one really believes the average numbers make sense.

But much like the measurements of Air Force pilots, the average inflation rate is effectively useless for individual households.

No one actually has a personal inflation rate that truly matches the aggregate average.

And it’s not just the composition that makes people wary of this number. Inflation is the most personal of economic indicators.

Take gas prices as an example.

When I graduated college I took a job on the east side of the state while my then-girlfriend (now wife) stayed in West Michigan to further her education. Pretty much every weekend one of us was on the road driving to the other side of the state and back.

The joys of the long-distance relationship.

Since we were both putting a lot of mileage on our vehicles, the price of gas was very important to our personal inflation rates.

I still remember when the gas price shot up above $2/gallon for the first time in my life in 2005: 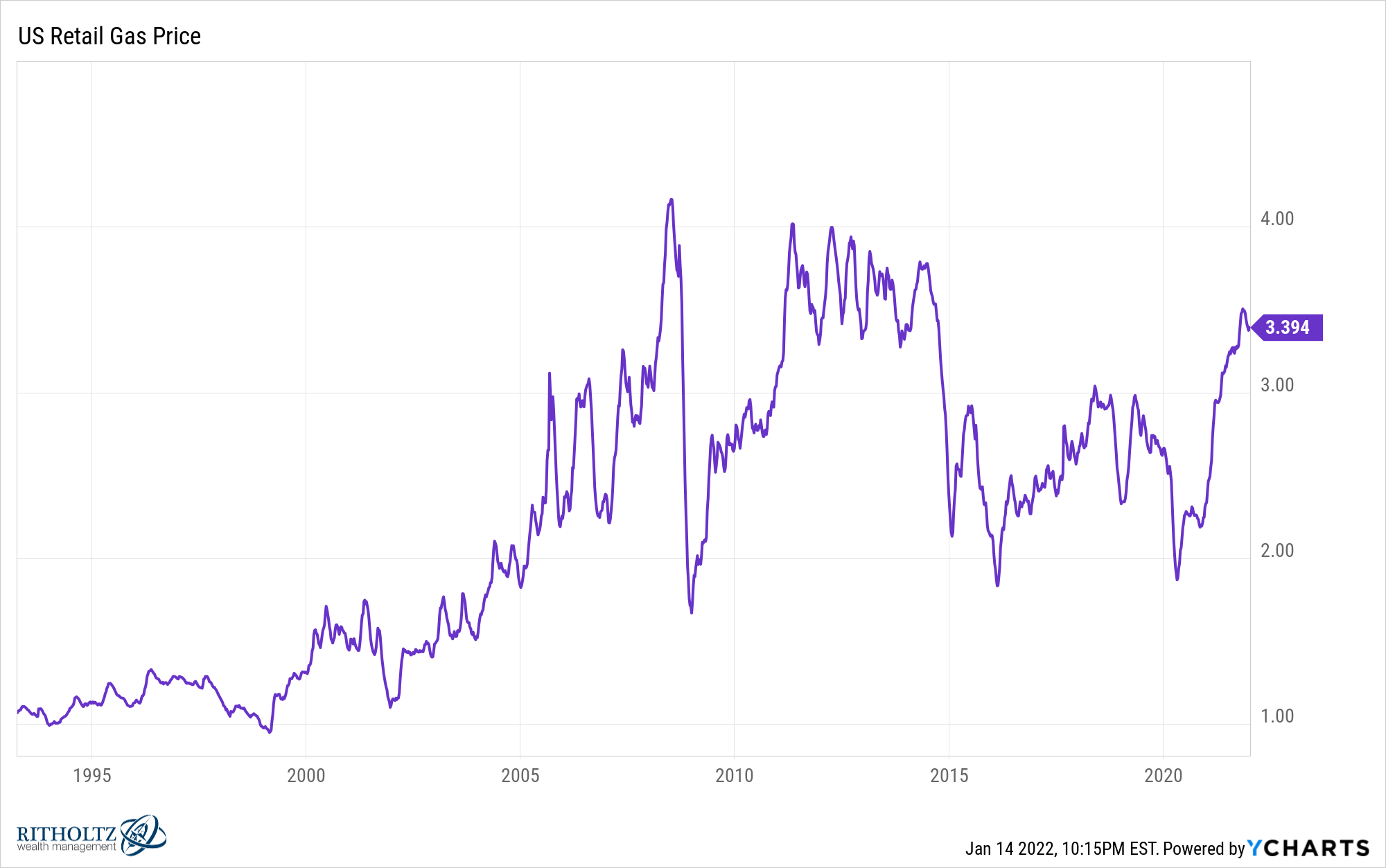 As someone just out of school who wasn’t making a lot of money, this was painful to my bottom line.

At the same time, housing prices and mortgage rates were both moving higher. Had I been in the market for a house at the time that would have been even more painful. Thankfully, I was renting and in no position to buy a home at the time so it didn’t impact me at all.

Even though gas prices are even higher now than they were back then they don’t really even register to me today because I’m not driving hundreds of miles every other weekend.

My office is 5 minutes from my house so I don’t drive a ton of miles anymore.

We bought our first house in late-2007 when prices were still crashing. When we purchased our current house in 2017 it came at higher prices but things were still reasonable compared to today’s prices.

We’ve also been able to refinance multiple times over the years because mortgage rates have come down. My first mortgage had a rate of 6.25% (or maybe 6.50%, I’m not 100% sure since I’m getting old). The pandemic allowed us to refinance under 3%.

My current home is probably worth 3x as much as the price we paid for the first house we bought but the monthly payment (excluding taxes) really isn’t that much higher after accounting for the equity we built in the first place and the much lower mortgage rates.

Len Kiefer, an economist from Freddie Mac, recently shared some stats about how much savings refinancing has given households these past two years: 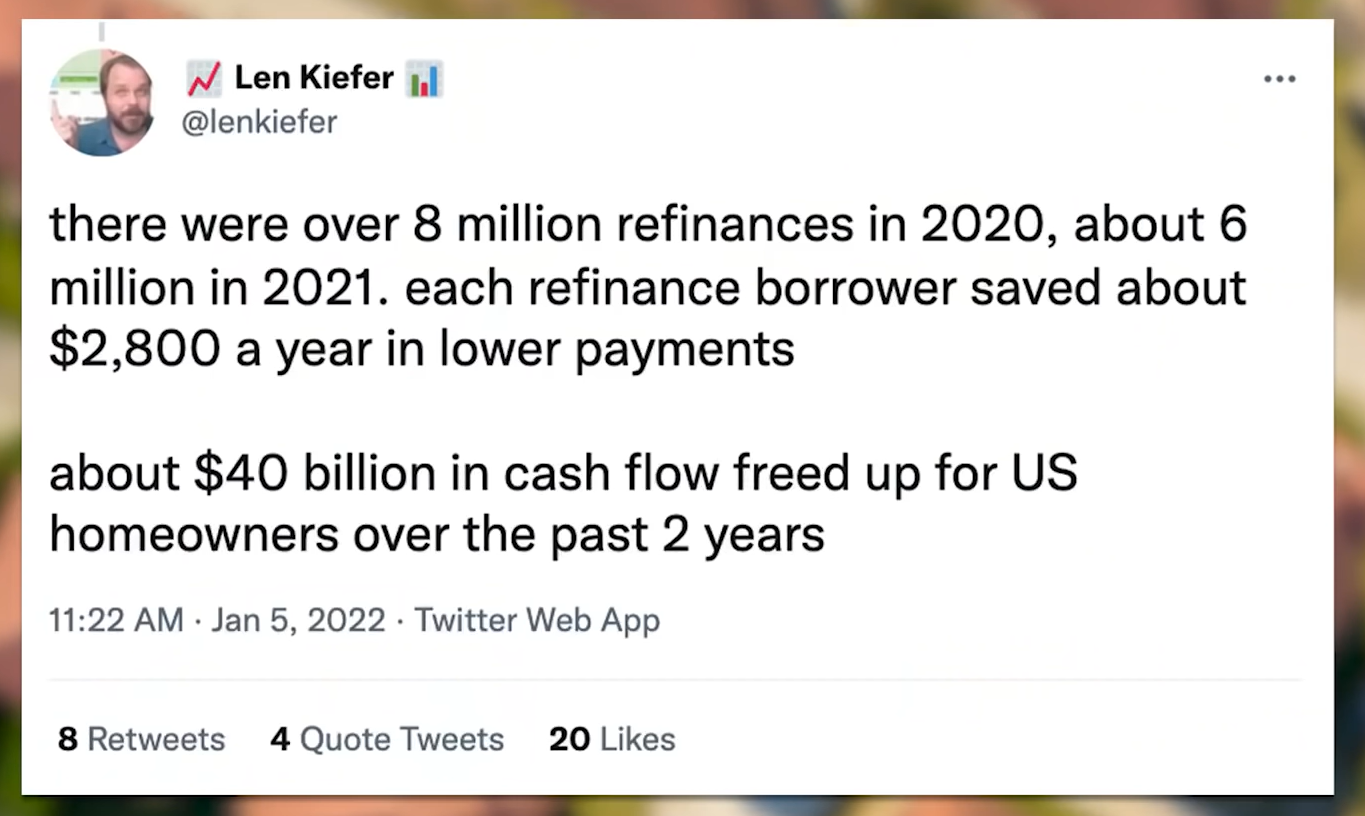 This is amazing if you’re a homeowner because you’ve been blessed with both lower mortgage rates and housing prices that are 20% or so higher over the past year.

And it’s not like refinancing is a one-time deal. You save that money every single month for as long as you’re in the house and paying off the mortgage. It’s like compounded savings.

But what if you’re someone who is in the market for your first house?

If you’re renting and re-upped your lease in the past 6-12 months there’s a good chance your rent has gone higher. And trying to buy with the low supply in the number of houses for sale and the much higher prices mean your monthly payments are going to be much higher than they would have been just a few short years ago, even after accounting for lower rates.

Homeowners have experienced deflation through a combination of higher housing prices and lower rates while those looking to buy or renting are experiencing an uncomfortably high level of inflation.

I feel for those people who are being punished by the current environment through no fault of their own.

I know we would all like to believe intelligence or hard work determines financial success or failure but unfortunately, your personal inflation rate is often determined by timing and luck more than anything.

My wife and I didn’t buy a house in 2007 because we thought it was a good time to buy from an investment perspective. We bought because we happened to be at that stage in our lives and housing prices just so happened to be coming down at that time.

We got lucky (even though the housing market didn’t bottom for a few years).

On the other hand, we didn’t make a poor decision to send our twins to preschool this year at a time when it’s difficult to find teachers because of a labor shortage, which caused a 10% spike in prices year-over-year.

To quote Kirsten from Station Eleven, “This isn’t your fault. This is just what happened.”

I know it can feel cathartic to complain that the government is manipulating the official inflation statistics but the truth is whatever the stated average inflation rate is it will always feel useless to the vast majority of households.

When it comes to inflation, no one is average.

Your personal circumstances will determine your true inflation rate more than anything else.

This week Michael and I joined Derek Thompson again on his excellent podcast Plain English to talk all about inflation:

Further Reading:
Some Thoughts on the Highest Inflation in 30 Years

1I’m also borrowing from The End of Average by Todd Rose here which is very good.