I recall an investment conference I attended in 2010 or 2011, back when people were still concerned about the possibility of a double-dip recession.

One of the presenters on stage was a quant so there were lots of numbers in his presentation.

He showed the valuations for a 60/40 U.S. stock/bond portfolio. His contention was rates were so low and valuations on stocks were so high (using the Shiller CAPE ratio) that the expected returns for a 60/40 portfolio were in the 95th percentile of poor expected outcomes.

People in the audience were still so scarred from the Great Financial Crisis that no one even put up a fight. Everyone just kind of grimaced, shook their heads and went looking for the nearest hedge fund manager at the next break between speakers.

It really felt like we were doomed for a low return environment for years to come in the “new normal.” 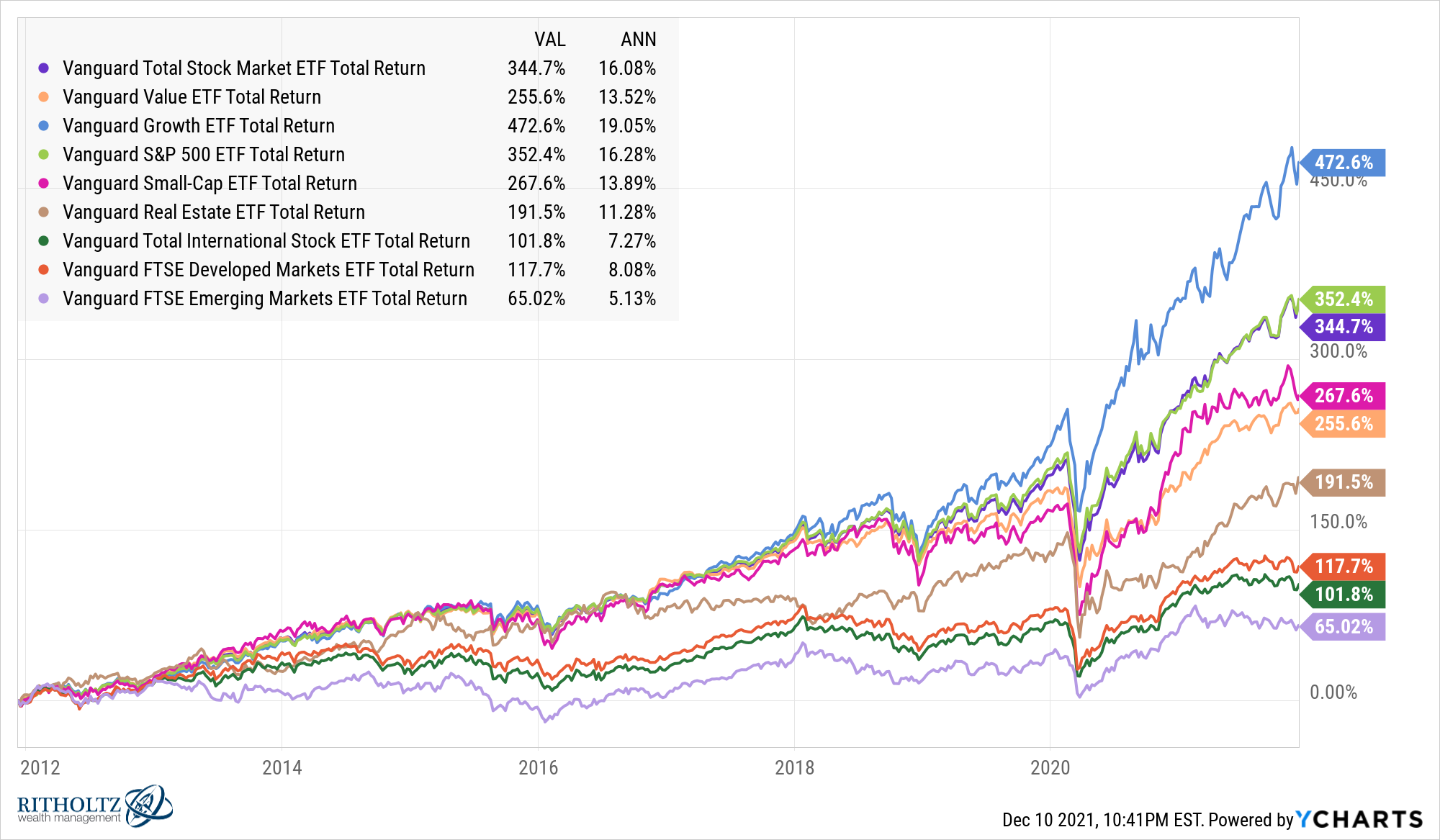 Look at those annual returns over the past 10 years.

U.S. growth is up almost 20% per year. The S&P 500 is up more than 16% per year. Small caps are up almost 14% per year. REITs rose more than 11% annually. Everyone has been dancing on the grave of value stocks for years now, yet they’re up nearly 14% per year over the last decade.

Of course, there have been some laggards.

Emerging markets have had a rough go at it on a relative basis, up just 5% per year. International stocks are up 7-8% over the past 10 years which is not bad until you compare them to U.S. stocks.

Still, few investors, professional or otherwise, expected returns to be this good coming out of the financial crisis.

In short, markets are hard to predict.

While this is always the case, you still have to set expectations for the future based on some combination of the present situation, historical market data and some guesstimates about the future.

No one is good enough to reliably and accurately align the past, present and future of the markets but this exercise can be helpful from a financial planning perspective.

Everyone should consider a range of outcomes when it comes to their portfolio. 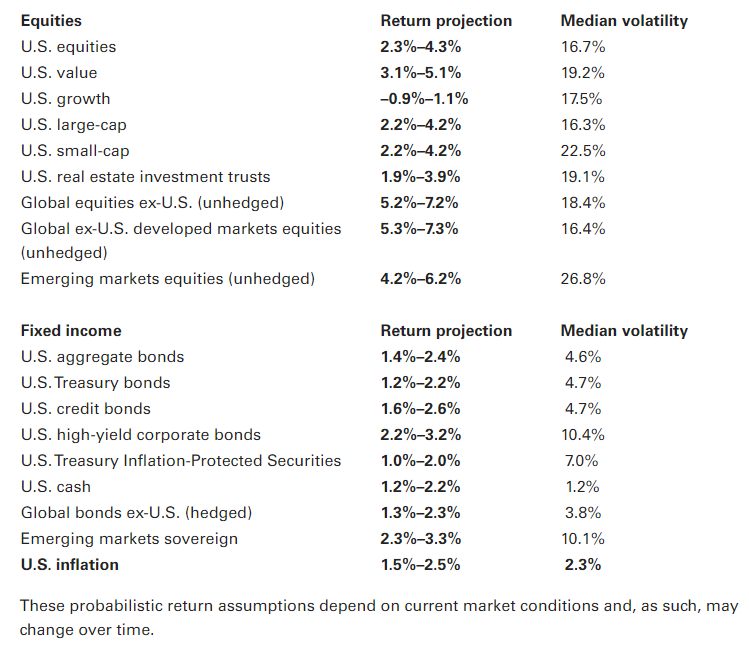 With a projected inflation rate of around 2% per year, the real return estimate for U.S. stocks is somewhere in the range of 0-2% real. They have growth stocks going negative after inflation over the next decade.

International stocks look more appealing based on these expectations, which makes sense when you consider how much the U.S. has outperformed.

Vanguard can’t predict the future but it’s not like they’ve been bearish on expected returns for the past decade like some other fund providers. They’ve been pretty constructive on return expectations throughout this bull market.

That last piece of the puzzle, mean reversion, is an interesting one to consider.

Take growth stocks. They’re up 19% per year for 10 years running. Let’s say Vanguard is right and U.S. growth does 0% nominally for the next decade.

That would turn a 19% annual gain over 10 years into annual returns of 9% over 20 years. Now Vanguard’s return expectations make sense considering that’s roughly the long-term average of the stock market over time.

What makes this effort so difficult is we have no idea what the future holds for the markets or the world at large.

Mean reversion is much easier to bank on if you can expect the future to look like the past. The world doesn’t work like that.

It’s not like anyone in 2018 or 2019 was predicting a global pandemic would cause governments around the globe to spend trillions of dollars that would result in much higher economic growth and inflation.

It would be silly to think the U.S stock market can match the 16% per year returns over the next 10 years. It’s not out of the realm of possibilities (that’s basically what happened in the 1990s following strong returns in the 1980s) but that shouldn’t be your baseline.

I don’t know what returns are going to be from current levels. But I am fairly certain stocks will be volatile. They will have corrections. And they remain your best bet for beating the inflation rate over the long run.

I was in New York City this past week and we discussed Vanguard’s return expectations and more on The Compound & Friends: