CNBC reported last night that the biggest banks in the United States would be stopping their buybacks to shore up their balance sheets because of the crisis:

The group — which includes JPMorgan Chase, Bank of America, Citigroup, Morgan Stanley, Wells Fargo, Goldman Sachs and two other banks — said in a statement that the pandemic was an “unprecedented challenge.”

“The COVID-19 pandemic is an unprecedented challenge for the world and the global economy and the largest U.S. banks have an unquestioned ability and commitment to supporting our customers, clients and the nation,” the forum said.

Buybacks are one way for companies to return capital to their shareholders and can help boost the price of stocks. In the fourth quarter of 2019, JPMorgan alone did more than $6 billion in net repurchases, which accounts for extra shares issued to employees.

The kneejerk reaction to this news from investors can be summed up thusly: this just shows that corporate leaders are buy high, sell low investors just like retail traders who allow their emotions to dictate their actions.

I get the sentiment. This is the point you want to be buying back more shares rather than cutting back because prices are so much lower.

But I understand why the banks are doing this. We’re facing an unprecedented economic crisis at the moment. Who cares about the prices you pay for your buybacks if your company doesn’t have enough capital on hand to survive?

And right or wrong, buybacks are almost always pro-cyclical in nature, as you can see from their historical pattern (chart via Ed Yardeni): 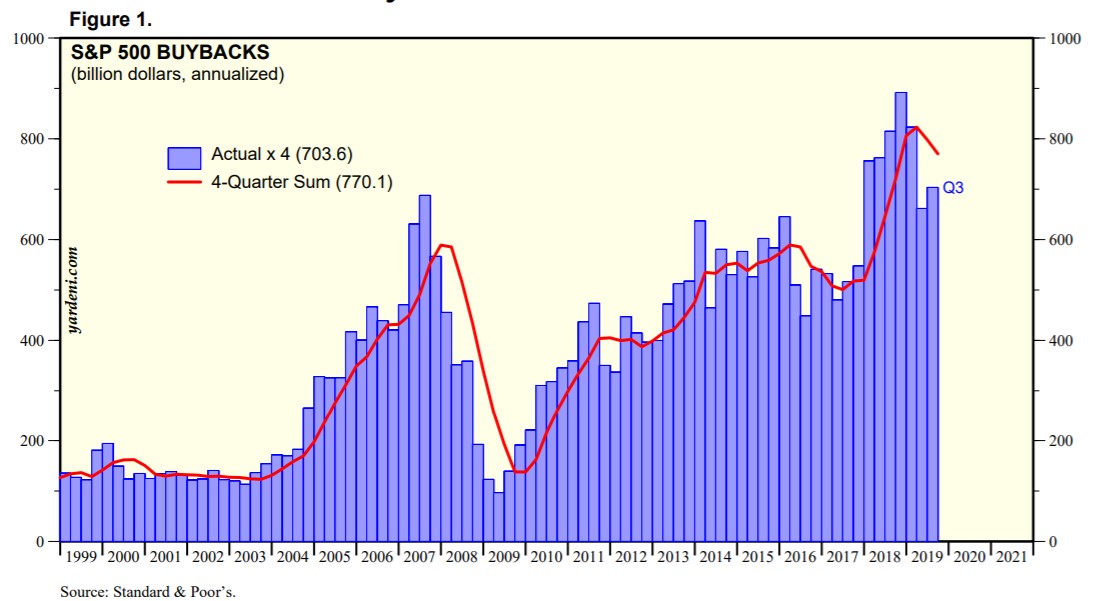 Corporate executives tend to buyback more shares when things are good and they have ample capital at hand while cutting back during downturns to preserve capital when things get tough.

Dividends are much more sticky than buybacks: 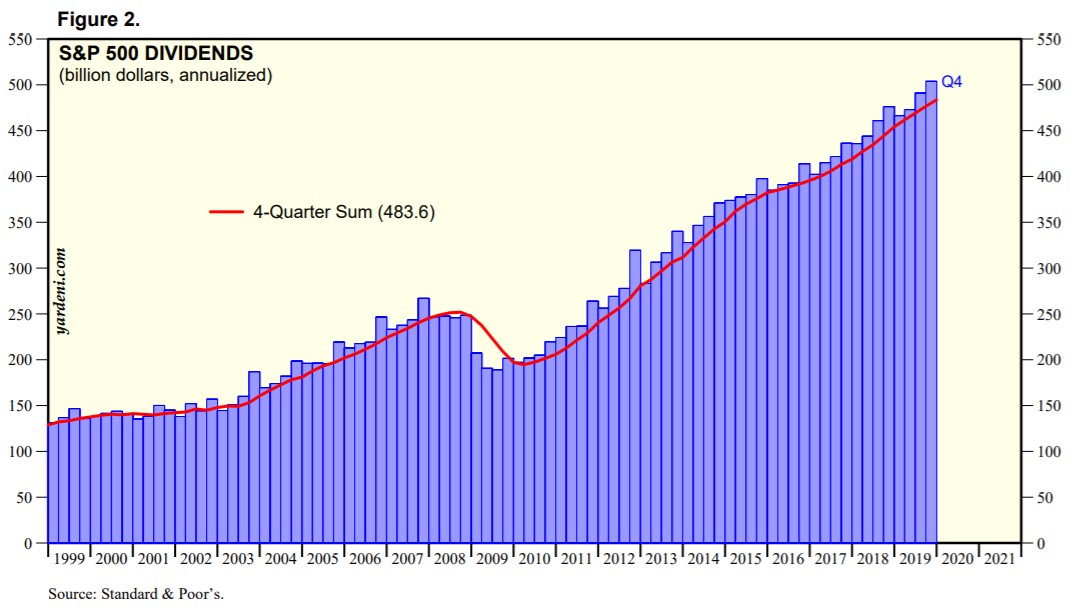 I don’t blame these corporate executives for making this type of decision but it also shows the difficulty involved in “swinging at a fat pitch” when the markets are caught up in a crisis.

Let’s assume you’ve been preparing for a market crash. You’ve been stockpiling cash for a number of years in hopes of buying when there’s blood in the streets. Cash has been a painful position to hold but now it offers optionality and the ability to take advantage of massively lower prices.

But we are also facing an economic crisis unlike we have ever seen. Economic activity is coming to a halt almost instantaneously. Businesses large and small alike are going to experience an unprecedented slowdown.

Many businesses will likely go under if the government doesn’t step in to provide a backstop. Many people will lose their jobs. Lives are being severely disrupted.

Even if you hold a bunch of cash at the moment it may not seem prudent to invest in the stock market, even if the expected gains from current levels are much more attractive than they’ve been in some time. If you’re going through a personal financial crisis it doesn’t matter how attractive prices look.

Market crashes can be paralyzing on a number of fronts. Falling prices can cause people to make poor decisions in the face of market and emotional volatility. But sometimes even prudent investment decisions can feel like the wrong ones to make from a financial perspective.

You may have cash on the sidelines ready to take advantage of lower prices but it’s possible that money would be better served as a backstop to any potential career or personal disruptions from the coming economic crisis.

I’m not suggesting those sitting on cash should hoard their funds at the moment. But this shows why financial planning often trumps investment planning when it comes to putting money to work during a crash.

If you don’t have your personal finances shored up your dry powder may not be very useful when it comes to being greedy when others are fearful.

Further Reading:
The Psychology of Sitting in Cash