There is something alluring about looking at houses and prices on Zillow.

I’m not sure how much stock we can put into pop culture indicators anymore since we’ve never had more access to information but Zillow’s share price screamed higher by almost 30% over the next week.1

From there the stock has gotten crushed, falling close to 50%: 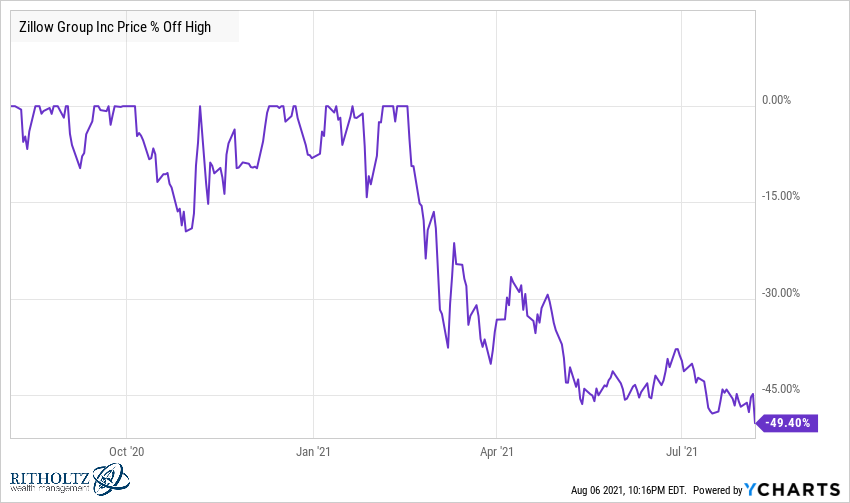 I posed this question on Twitter this past week:

Can someone who is smarter at stocks than me explain this one? pic.twitter.com/xjVYVQyA9Z

I received a lot of answers on this one. Most were certain they knew the exact reason.

Some people claimed this was the markets acting as a forward-looking indicator showing the housing market is going to crash.

This one doesn’t pass the smell test. Other housing-related stocks are crushing it this year: 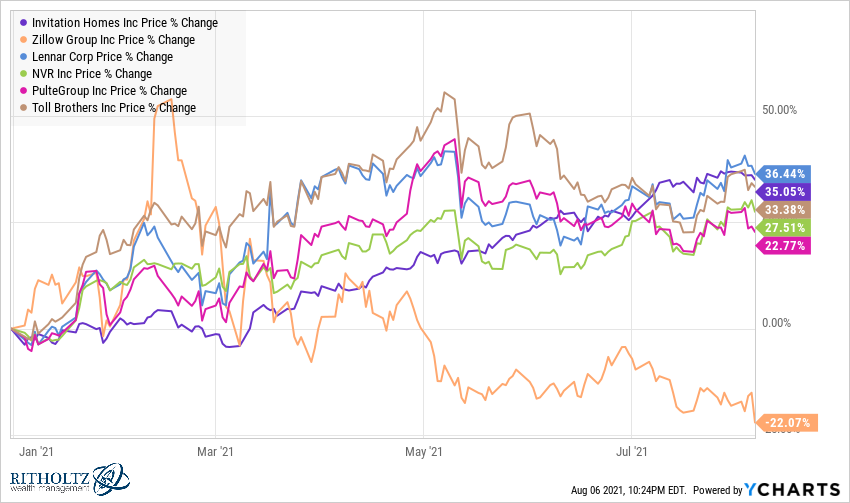 Another theory was that this is a housing boom in price only. This makes sense considering how low inventory levels are: 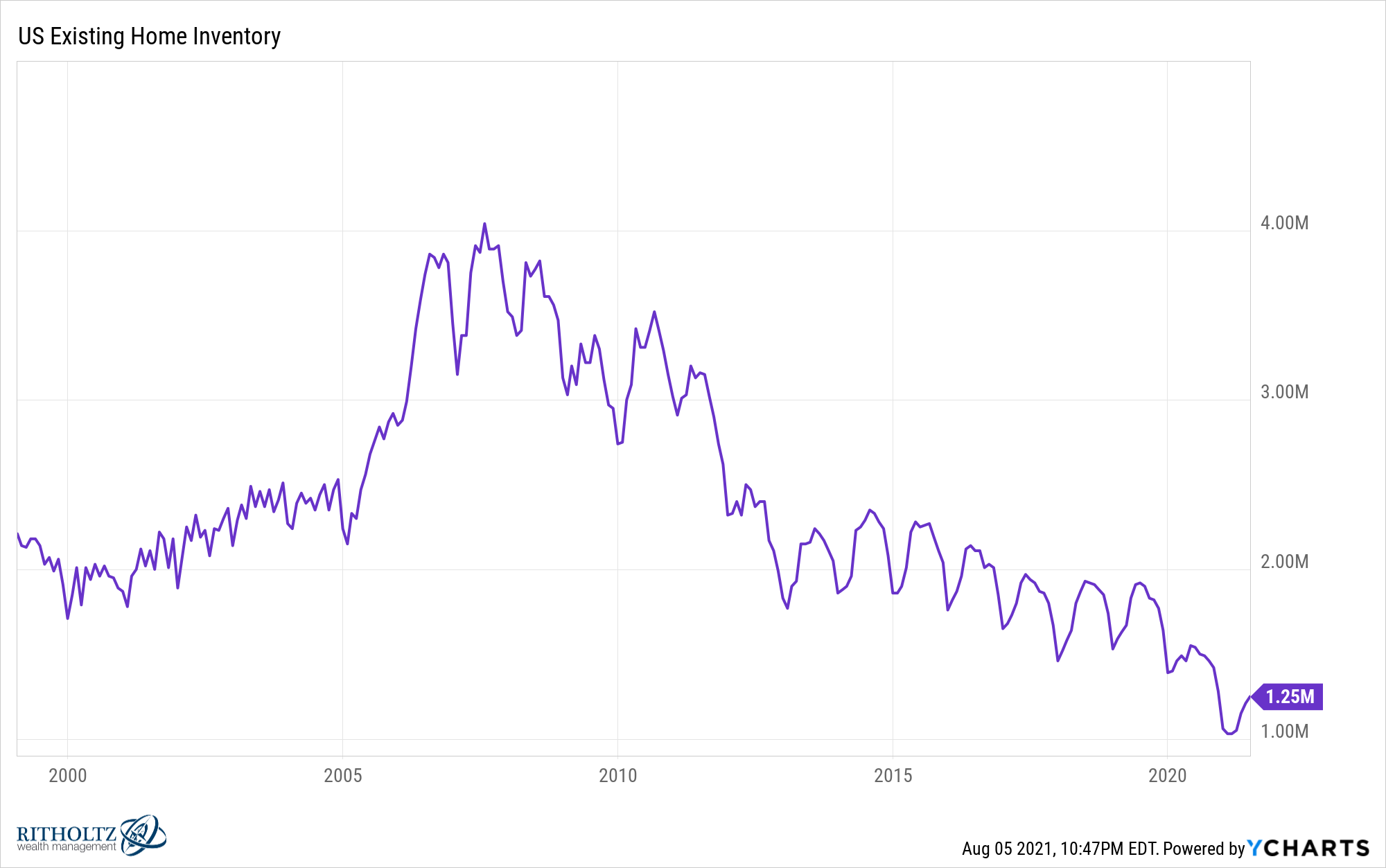 On the other hand, part of the reason for this is houses are flying off the shelves. Existing home sales are higher than they’ve been in a long time: 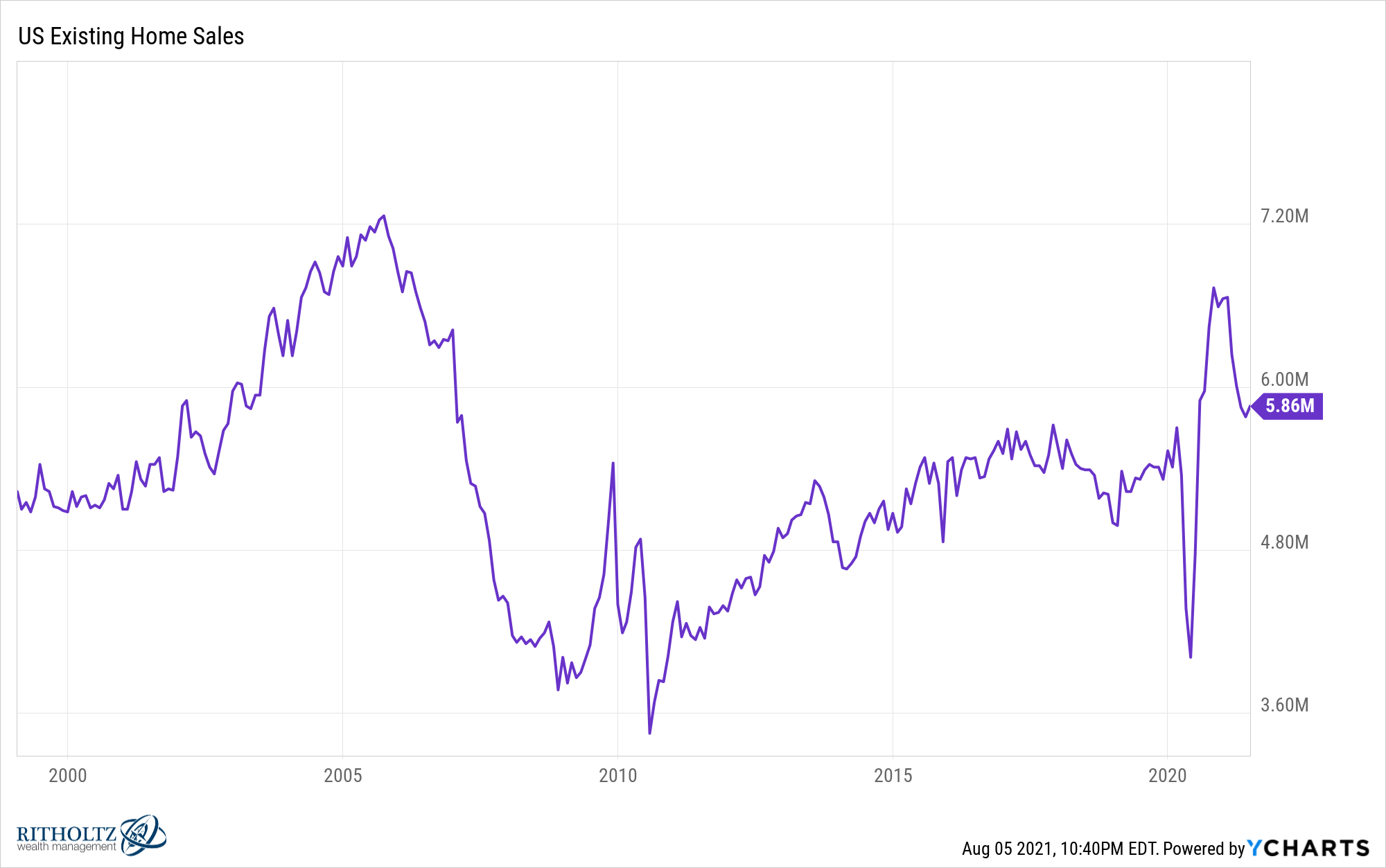 We’re not quite back to early-2000s era bubble territory but it’s close enough.

This one also sounds good in theory but Zillow just reported results this week and it doesn’t appear they are slowing down in the slightest: 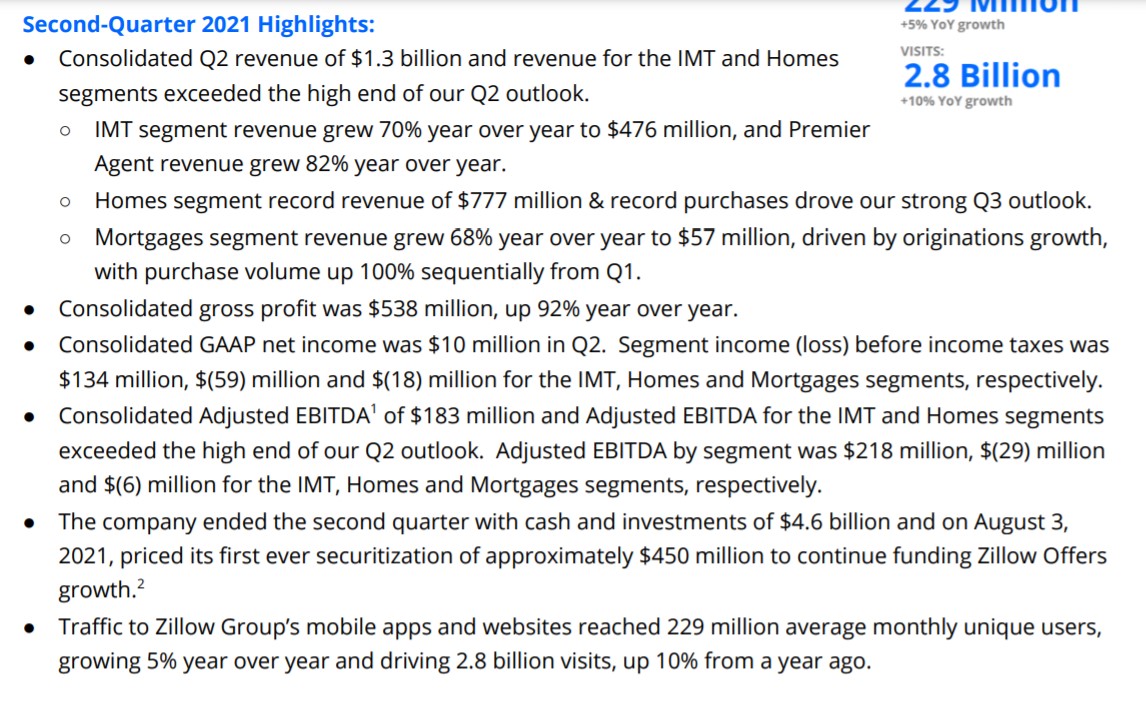 The company is still growing at a healthy clip.

If it’s not the industry and it’s not a company that’s falling out of favor the next logical guess would be valuation. This is an argument that seems to hold water: 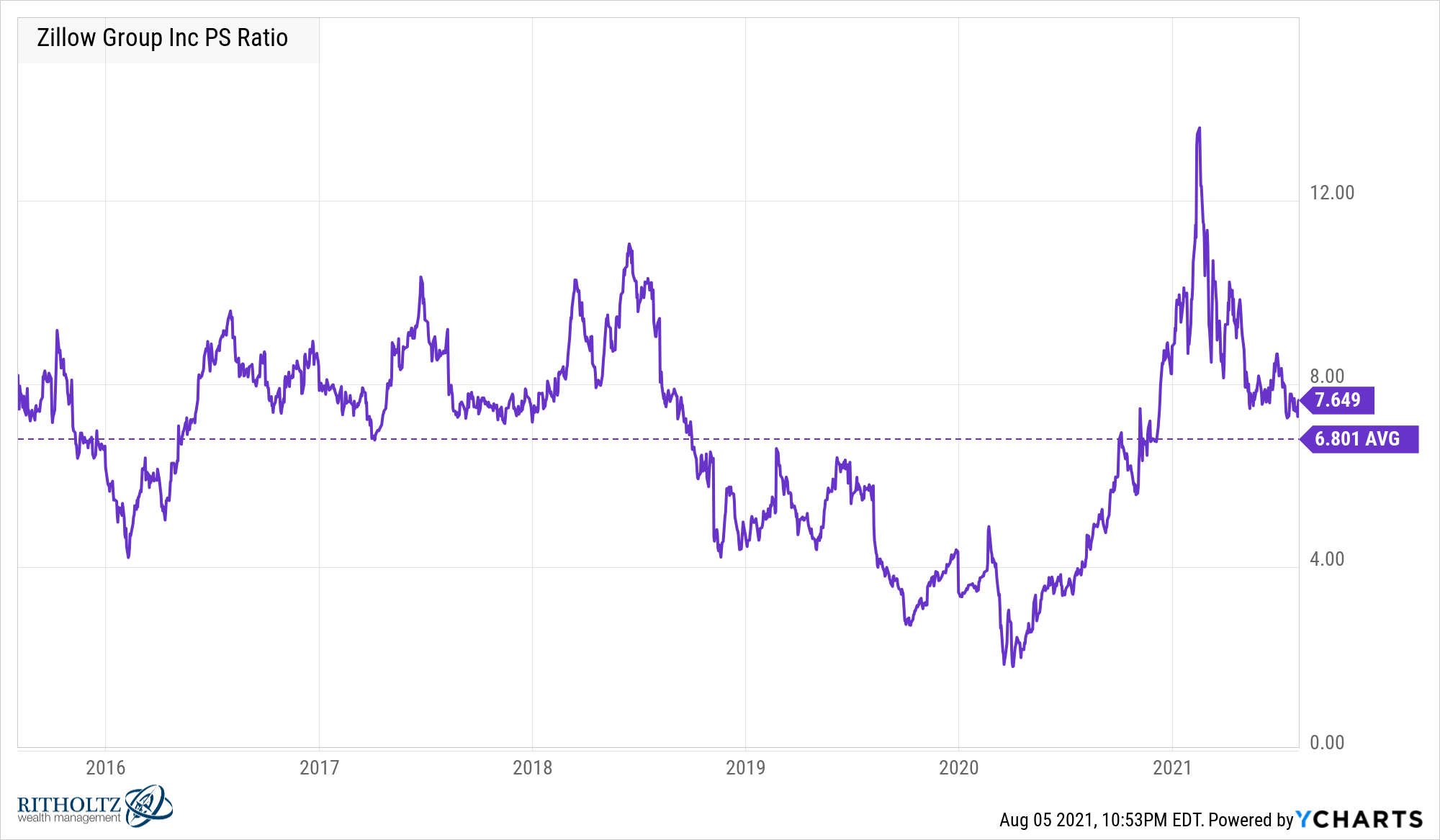 The price to sales ratio was well over 13x in the February blow-off top, twice the average over the past 5 years.

For comparison purposes, the S&P 500 trades at around 3x sales at the moment. Yes, Zillow is a growth stock, but 13x is a tad on the ludicrous side.

Another way of saying valuations were out of whack with reality is the stock price just got ahead of itself. Look at the huge gains from the lows in March of 2020: 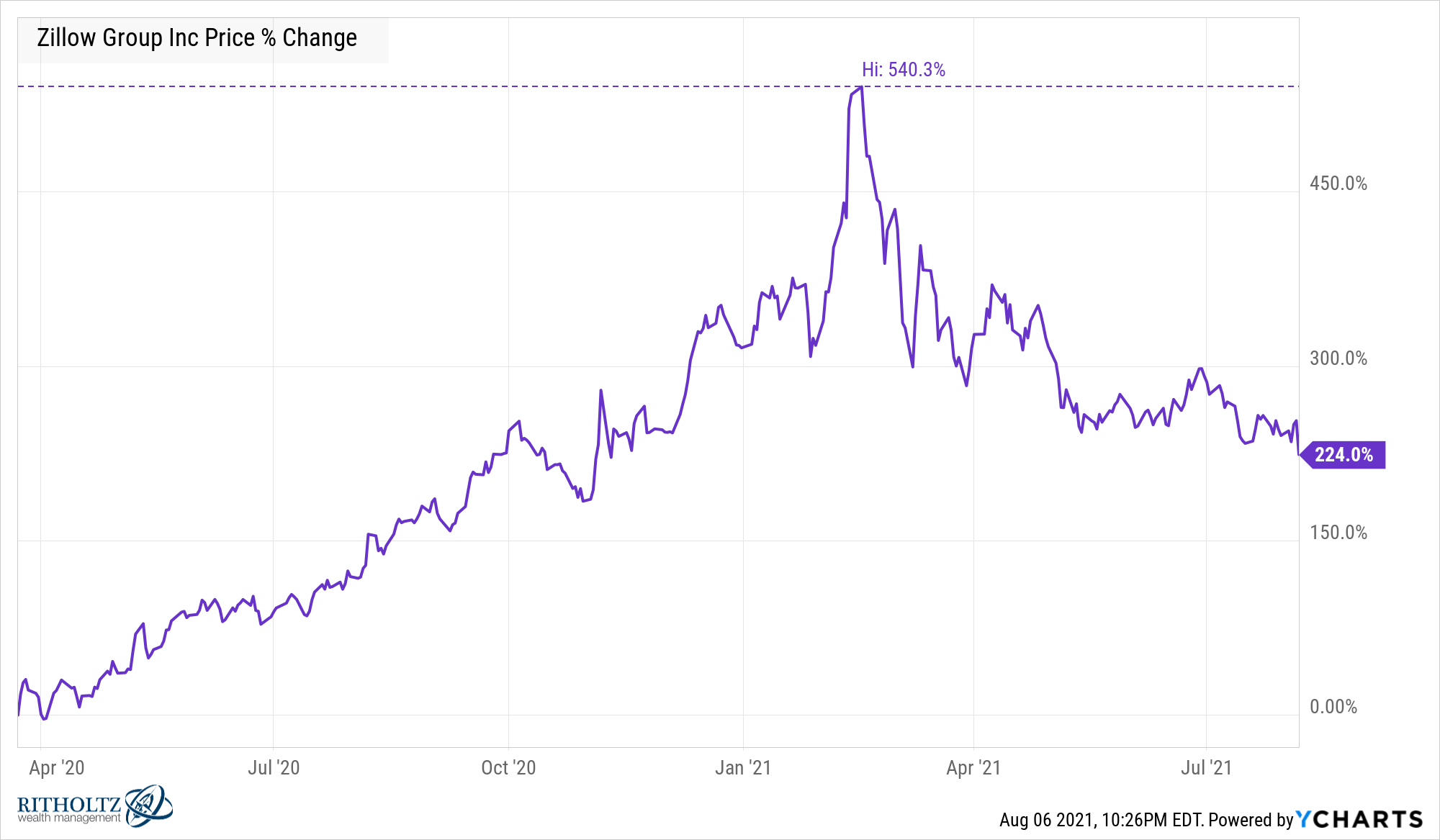 Maybe this was a case where investors got overly excited and ran the price well beyond the zone of rationality.

There are a number of stocks with similar return profiles. Stocks that are still up a lot from the lows of the Corona crash: 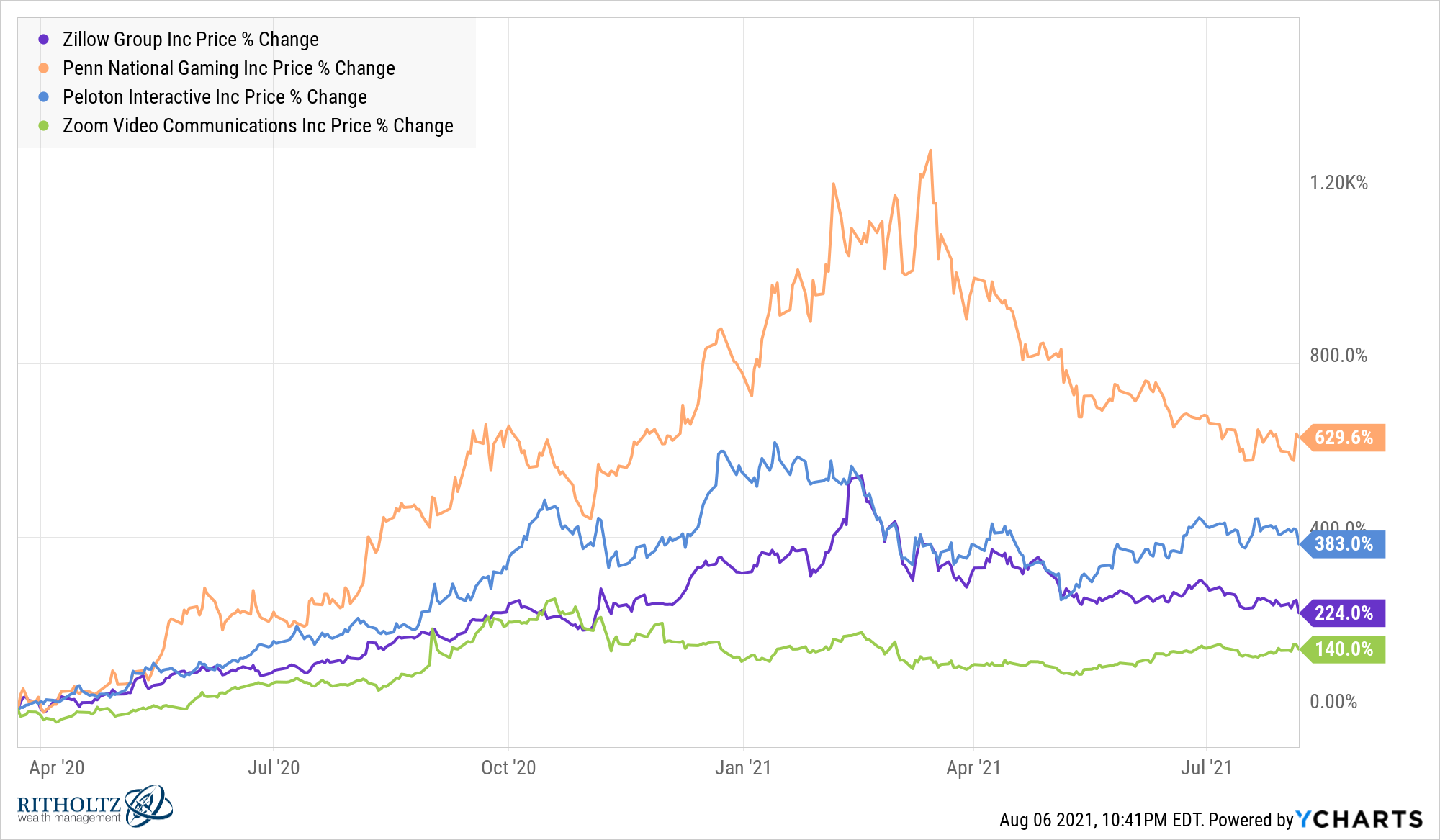 Despite being down a lot from their highs: 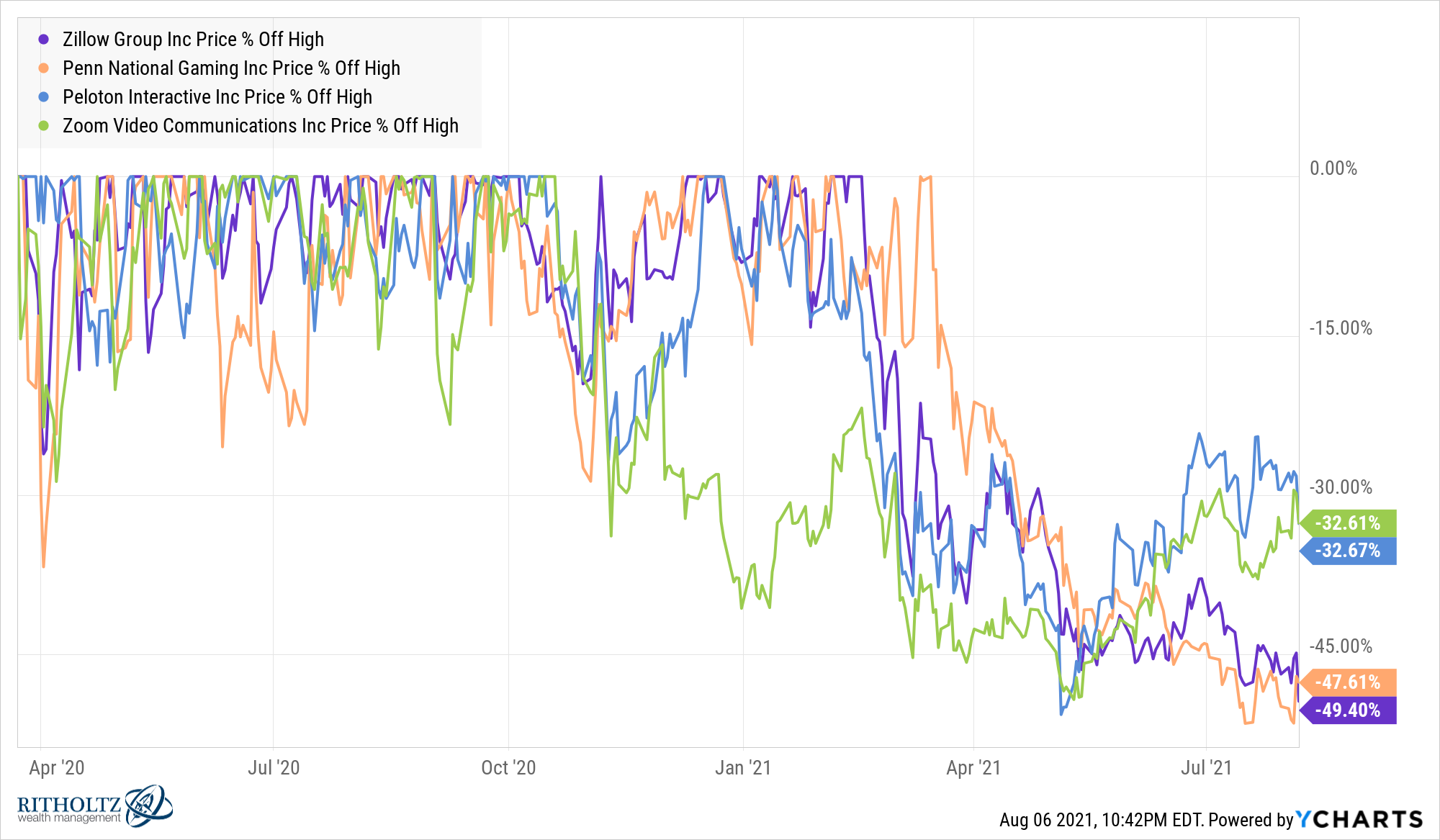 If you click on my tweet from above you’ll notice the answers are all over the place. Many people were certain they had the one true reason for Zillow’s stock price crash.

The truth is there isn’t just one factor that drives stock prices over the short-term. Markets are made through the difference of opinion. For every seller, there has to be a buyer.

And after a stock move happens it’s always obvious but how many people were saying these things at the time?

Hindsight Capital LLC remains undefeated but giving answers about what’s already happened isn’t nearly as impressive as predicting it ahead of time.

Unfortunately, this is easier said than done.

The other hard part about handicapping individual stocks like this is we never truly know if a 50% decline in price is the natural course for a wonderful growth stock or a signal the company is on its way to obsolescence.

Michael recently shared the following chart on Amazon’s drawdowns over the years: 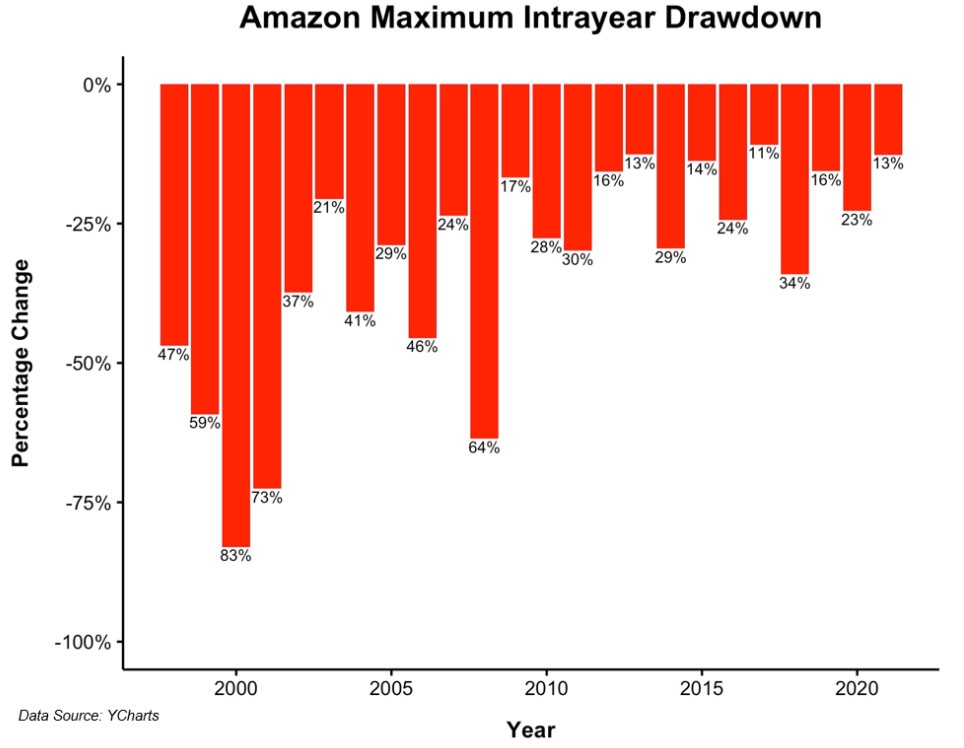 Looking back now it’s obvious each one of these drawdowns was a wonderful buying opportunity.

But what were people saying at the time?

Amazon is wildly overpriced! Just look at the valuations! The stock has gotten too far ahead of fundamentals and was due for a crash!

For every Amazon there are hundreds of other stocks no one ever hears about anymore because they don’t go on to become trillion-dollar companies. They crash and simply don’t come back.

Sometimes there is a good reason stocks get cut in half.

Sometimes there is a good reason stocks rise 500% in a matter of months.

But most of the time these price moves are random, an amalgamation of emotions, differing opinions, expectations and momentum.

This is part of what makes owning individual stocks equal parts infuriating and intoxicating.

We would all like for there to be a simple explanation for complex topics like the movements of stocks in the short run. Sometimes there is.

But most of the time there are far too many reasons to count and those reasons are only known with the benefit of hindsight.

1Some people have speculated this blow-off top was part of the Archegos ordeal. That would make a little more sense.