Certain prognosticators have been calling this cycle tech bubble for some time now. There have been more than a handful of 1999 comparisons. This analogy falls flat for a number of reasons. The dot-com bubble was otherworldly in terms of investor euphoria but this time around most of the insanity has been happening behind the scenes in the private markets.

The public markets have been far more skeptical this time around (and for good reason). This is a piece I wrote for Fortune about where the IPO market is different this time in terms of performance but also similar in terms of historical first-day returns.

The IPO market is having a rough go at it in 2019. WeWork just shelved plans to go public after public markets basically revolted following the release of their S-1. Shares of Peloton fell double-digits when it IPO’d last week. Other former private-turned-public tech darlings such as Uber, Lyft, and Slack have had less than stellar performance after going public this year.

If we break down the returns for some of the most high profile tech IPOs of this decade, it shows the performance is all over the map: 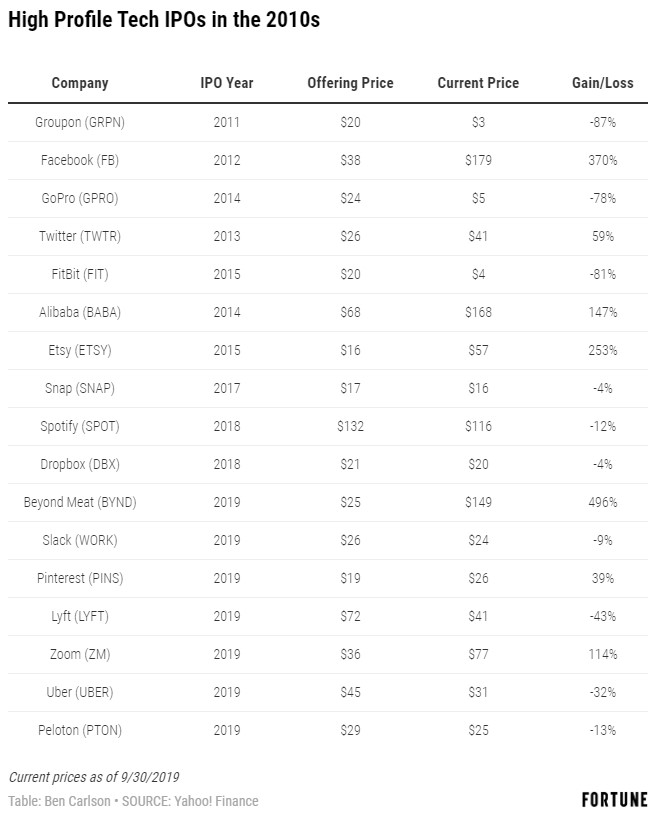 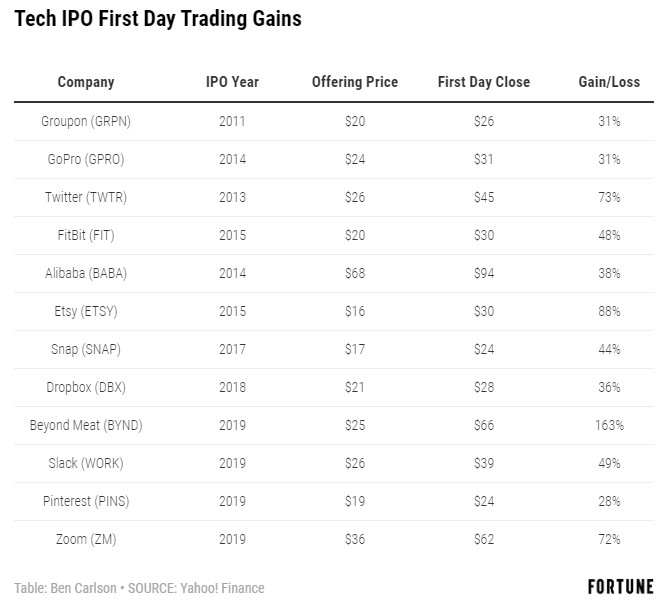 However, these gains didn’t last for most of these companies and if we exclude those initial first-day gains, things look much worse from a performance perspective: 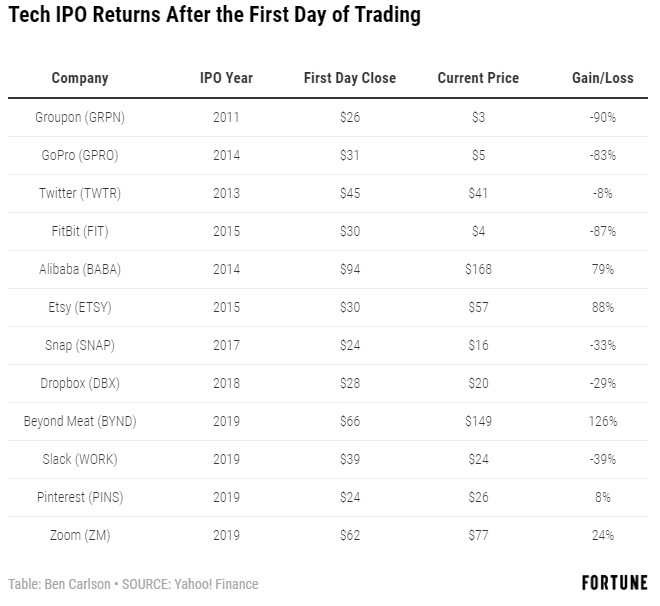 The gains in companies such as Alibaba, Etsy, and Beyond Meat are still pretty good, all things considered. But a majority of the total gains from the IPO price came on the very first day of trading. Almost half of Alibaba’s gain came from the first-day pop. More than two-thirds of Etsy’s total returns came on IPO day. And nearly three-quarters of the return in Beyond Meat shares came the day it went public.

The reason this is a problem for investors is because it can be difficult to get a fill on the first day of trading when a stock goes public. You often need a relationship with the right broker or brokerage firm to get an allocation to a hot IPO. And there is a reason many IPOs end up oversubscribed by investors who want in on the action. The average first-day pop in share price is a real phenomenon.

Jay Ritter, an IPO expert from the University of Florida, has been publishing work on initial public offerings for years now. His work shows IPOs tend to experience a big gain on their first day of trading, but then subsequently go on to underperform the market.

From 1980-2017 there were more than 8,300 stocks that went public. The average return on the first day of trading was a gain of almost 18%. But over the ensuing 3 years, IPOs underperformed the market by nearly 18% in total. So getting in on the ground floor becomes very important for many companies that go public if you wish to see decent-sized gains in your holdings.

It’s also instructive to break down these averages because it’s not like every stock that IPOs goes on to have an enormous first-day price surge. From 1983-2018 there were more than 7,600 IPOs. Roughly 500 of these stocks, or around 7% of the total, saw gains in excess of 60% on day one. More than 36% of the companies experienced first-day gains in the range of 10%-60% with the remaining 55% or so of IPOs seeing gains of 10% or less.

So it’s basically a coin flip between stellar gains and middling returns on day one. It can be difficult to use that first day as a precursor for what’s to come when you look at individual examples. Facebook came public to a lukewarm reception. In fact, after that first day of trading, shares fell even further, bottoming out below $20. Returns in the stock have been spectacular ever since. Twitter, on the other hand, was up more than 70% right out of the gate. Shares then fell 75% and are just now slowly but surely working their way back up to the closing price on the day of the IPO.

It’s still way too early to say what the long-term results will be for the IPO class of 2019. But the public markets have shown in recent years they are much less forgiving than private market investors when it comes to valuing these companies.