Some stuff I’m thinking about with the markets this week:

Some investors are preparing for wild swings in financial markets, worried that inflation, and the Federal Reserve’s pledge to let it rise, will lead to a more volatile world.

The reason: The economic policies aiming to create inflation now are the opposite of the ones that kept markets relatively stable for decades.

Intuitively it would make sense market volatility would be higher when inflation is higher but the data doesn’t line up with this idea.

I looked at the S&P 500 versus the CPI going back to 1926 to gauge both market returns and volatility when inflation is either above or below average:

Not surprisingly, returns have been much lower in a highly inflationary environment. Stocks are more similar to bonds than most investors would think so this relationship makes sense.

But surprisingly, those lower returns didn’t come with higher volatility. Of course, returns were roughly half as much with three-quarters of the volatility in the above average inflation scenario but I figured the volatility would have been higher too.

The past is not prologue and all of that but I was surprised by this data. Sky-high valuations may act as a countervailing force here but it would be interesting if higher inflation actually made the markets less volatile if it sticks around for a while.

Have we really seen this movie before? Here’s a look at AMC’s market cap change through the close yesterday: 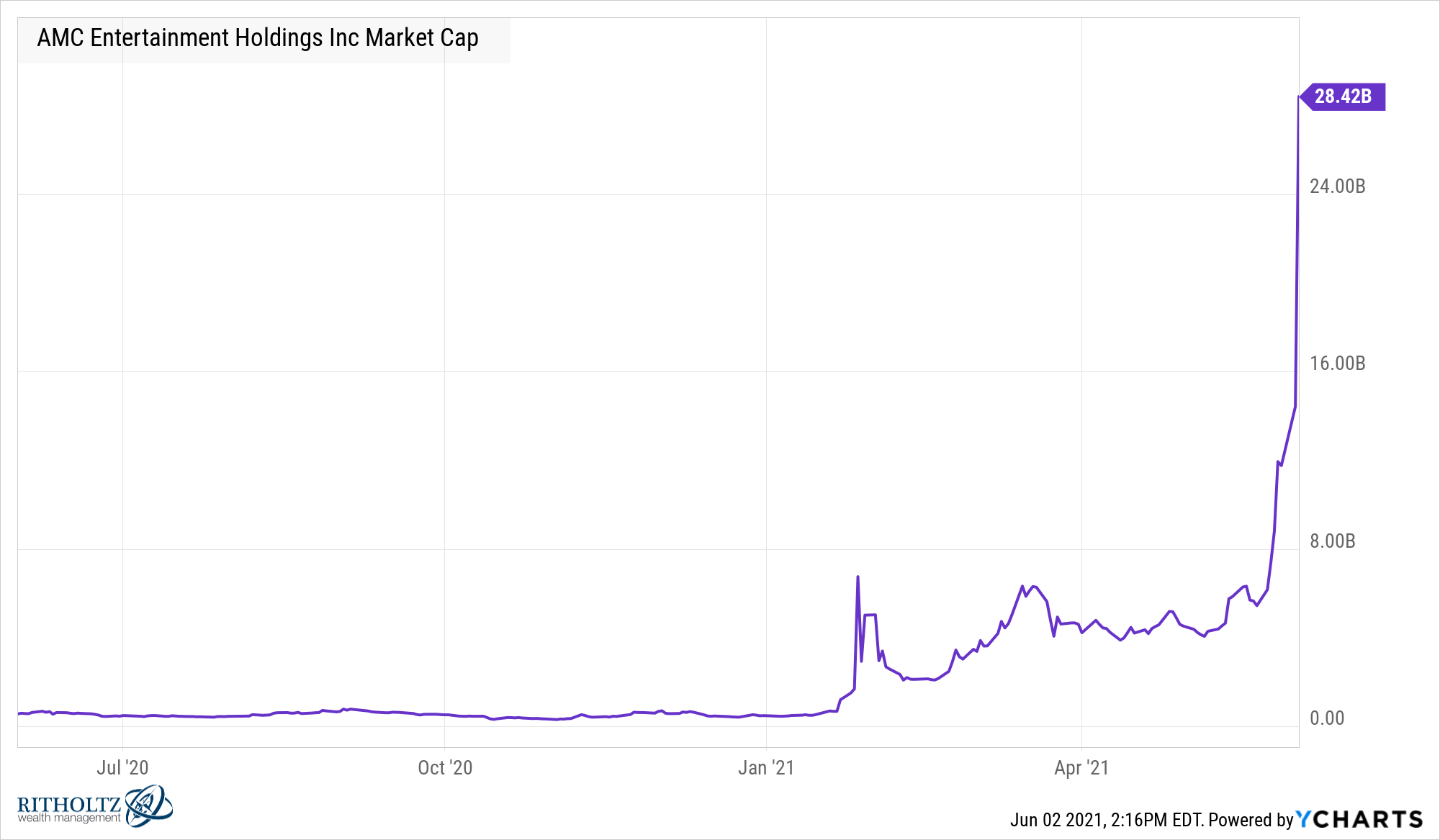 It’s perfectly normal for a movie theater chain that was teetering on the edge of bankruptcy last year to go from a $475 million company at the beginning of the year to nearly $30 billion 5 months later, right?

The strange thing about this meme stock saga is we have and have not seen this movie before.

Yes, speculation is as old as the hills and that part of the markets will never go away.

But this is also very different from past excess. This isn’t some hot new innovation people are bidding up in hopes it becomes the next big thing. This is a company people know is not worth its current value. No one is even pretending that’s true.

This is the internet bleeding into the markets in a big way. It’s a coordinated viral meme working its way through the stock market.

This doesn’t really impact the long-term nature of markets but this stuff is not going away. Young people who grew up on the internet are now having a large impact on certain companies. Their tolerance for risk seems to be much higher than previous generations.

The markets have ALWAYS been rigged, broken and manipulated but this increased appetite for speculation and gamification in the social media era is an added twist.

We know how this ends but we’ve never really seen a movie like this before.1

What’s the biggest difference between small caps and large caps? AMC and Gamestop have by far to biggest returns year to date for the Russell 2000 Index of small capitalization corporations, each up well over 1000% this year through yesterday.

Despite these enormous gains the overall Russell 2000 Index is up “just” over 16%. Why is this the case?

First of all, there are a number of small stocks down a lot this year too. I counted 34 names down 50% or worse.

But it’s also because this index is far less top heavy than the S&P 500.

In contrast, the top 10 of the Russell 2000, which now includes both AMC and Gamestop, makes up just 4% of the small cap index. Apple and Microsoft each make up more than 5% of the S&P 500. 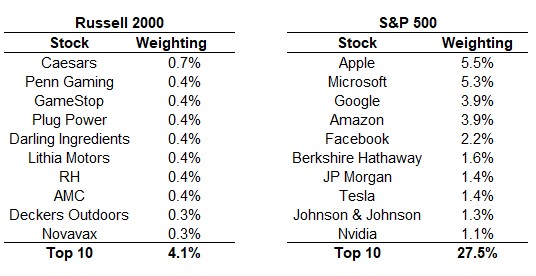 For better or worse, the Russell 2000 is more diversified and spread out than the S&P 500. If that index is going to rocket higher (or lower) it needs participation from a much larger number of stocks.

So even when you get these massive winners from companies like AMC and GameStop, they don’t have an outsized impact on the overall market. The same applies when these meme stocks inevitably crash.

These gains and losses will mostly be contained to the retail and hedge fund investors who are long and short the shares.

Godspeed to anyone playing the meme stock game.

Further Reading:
The Guy Fieri Theory of Investing in the Internet Age?

1AMC is crashing today to the surprise of no one but that’s what makes this so different. No one actually believed AMC should be worth $30 billion. It’s all a game.