Last week I looked at the impact of high inflation on the stock market. In summary, it’s typically not a great thing. In this follow-up piece I go over some of the reasons why this is the case.

Historical data show that stocks tend to post strong performances during periods of rising interest rates but only below-average results when inflation is rising or above average.

This counterintuitive dynamic was explained by Warren Buffett in 1977 in “Why Inflation Swindles the Equity Investor,” which he wrote as the U.S. was experiencing some of the worst price increases in its history. Buffett showed that inflation can wreak havoc on bond investors because it causes their periodic income payments to depreciate over time. But he said stocks are more like bonds than most investors realize:

The main reason, I believe, is that stocks, in economic substance, are really very similar to bonds.

I know that this belief will seem eccentric to many investors. They will immediately observe that the return on a bond (the coupon) is fixed, while the return on an equity investment (the company’s earnings) can vary substantially from one year to another. True enough. But anyone who examines the aggregate returns that have been earned by companies during the postwar years will discover something extraordinary: the returns on equity have in fact not varied much at all.

He also demonstrated that the return on equity, or book value, has been relatively stable over time across a number of different economic regimes. ROE measures how much profit a corporation generates for every $1 of shareholder equity. So if the returns on that shareholder equity don’t change much over time, inflation would gradually eat into those returns, causing a lower payout to investors in the form of profits. 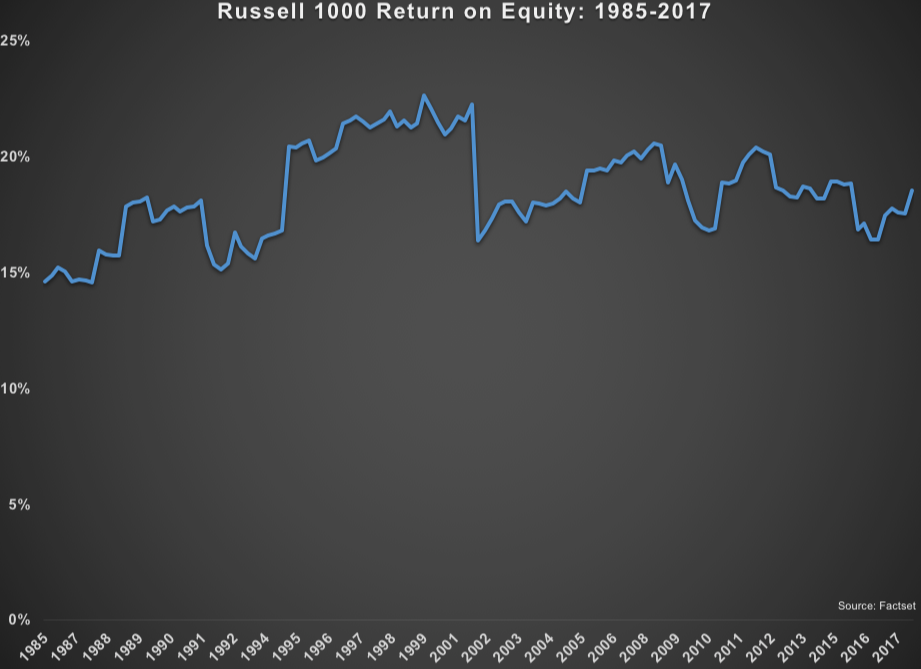 The performance has been fairly stable in this time frame. In fact, the standard deviation of these returns was just 4 percent, much lower than the returns on stock market assets in general, which were more than three times as volatile at 14 percent. If you look at the ROE like an “equity coupon,” as Buffett calls it, it makes more sense why inflation would be harmful to the returns of stock investors.

Rising interest rates and their impact on stock market performance should also be considered from an asset-allocation perspective. Investor capital has to go somewhere — stocks, bonds, cash, real estate or alternative investments — and those allocation decisions are often driven more by relative value than absolute value.

When interest rates rise, stocks see more competition from fixed-income assets, but at the same time, bonds lose principal value. So it’s quite possible that investors will stay in stocks when bonds are falling, or sell from their bond holdings to buy stocks. Investors typically look to bonds to diversify poor performance in their stock holdings, but historically stocks diversify poor performance in the bond market as well.

The following table shows each calendar year that 10-year Treasuries suffered a calendar-year loss going back to the late 1920s along with the corresponding returns on the S&P 500 in same those years: 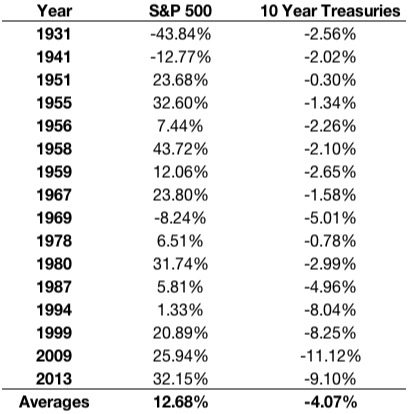 The table demonstrates that stocks have done an admirable job diversifying negative returns in bonds over time, showing losses only in three out of the 16 different times that bonds had down years. The spread between the two averaged more than 16 percent. It should also be comforting to those who practice diversification that even when both have fallen in the same year, bonds typically don’t get crushed like stocks do and instead tend to only show minor losses.1

When stocks fall, U.S. government bonds have historically performed well because there is said to be a flight to quality, where investors view Treasuries as a safe haven asset. When those roles are reversed and bonds are falling, it appears that investors view stocks as a better alternative.

This may not always be the case, as stocks and bonds could fall together in the future because of rising rates. But it’s more likely that higher inflation will be the culprit that would make it painful for both stocks and bonds at the same time.

1This is true of intermediate-term bonds but may not be the case with longer-maturity bonds or those with lower credit ratings.