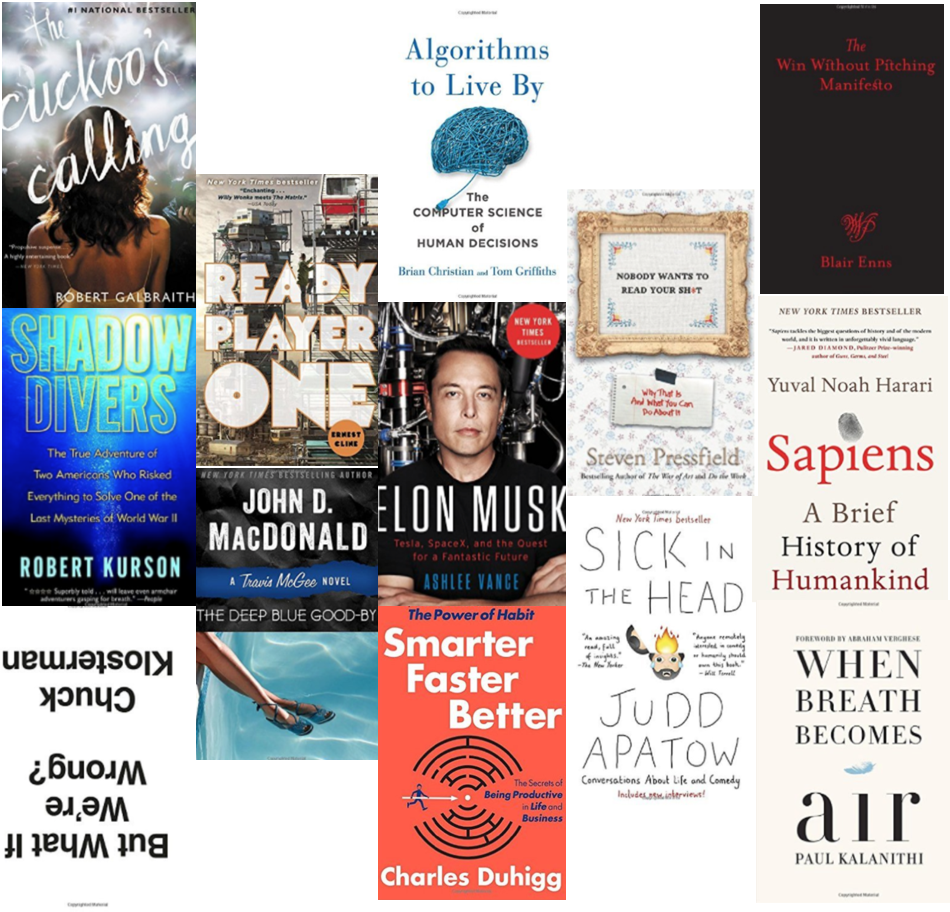 These were my favorite books I read in 2016:

Smarter, Faster, Better: The Secrets of Being Productive in Life and Business
Duhigg discusses the science behind motivation and the systems that can actually help people change their behavior which goes far beyond the typical lifehacks and shortcuts. He shows why motivation is a skill that can be learned and honed.

Good quote:  “Scientists have found that people can get better at self-motivation if they practice the right way. The trick, researchers say, is realizing that a prerequisite to motivation is believing we have authority over our actions and surroundings.”

Sapiens: A Brief History of Humankind
This book covered so much ground it’s almost impossible to explain exactly what it’s about — history, evolution, human psychology, economics, science, philosophy, sociology, technology, happiness, where things are heading in the future and much more. This was by far my most highlighted book of the year.

Good quote: “Just try to imagine how difficult it would have been to create states, or churches, or legal systems if we could speak only about things that really exist, such as rivers, trees and lions.”

Algorithms to Live By: The Computer Science of Human Decisions
Algorithms are going to continue to be a bigger part of our lives from here on out so it makes sense to gain a better understanding of their strengths and weaknesses. This book does a great job of explaining how they work, where they help and where they hurt when making decisions. This was one of the more original books I’ve read in a while. It gets wonky at times, but it’s worth it.

Good quote: “An algorithm is just a finite sequence of steps used to solve a problem, and algorithms are much broader—and older by far—than the computer. Long before algorithms were ever used by machines, they were used by people.”

Elon Musk: Tesla, SpaceX and the Quest for a Fantastic Future
Musk is a polarizing figure as well as something of a celebrity CEO. He’s revered in the technology world while many people in finance think the guy’s a fraud. He’s either this generation’s Thomas Edison or PT Barnum. No matter where you fall on this spectrum, the story of his life, business successes and failures is worth reading to gain a better understanding of Musk as both a person and a businessman.

Good quote: “Where Mark Zuckerberg wants to help you share baby photos, Musk wants to . . . well . . . save the human race from self-imposed or accidental annihilation.”

Sick in the Head: Conversations About Life and Comedy
Judd Apatow performs a series of interviews with well-known comedians and gets them to open up on life, stand-up, jokes and misery (something many comedians have in common). I absolutely love stand-up comedy (check out my new favorite here) and actually saw Apatow perform a set earlier this year. I find the process that comedians go throw to create and perfect their acts to be really interesting.

Good quote: “We will lose the war to China because of Twitter.”

But What If We’re Wrong: Thinking About the Present as if it Were the Past
This is a book that will make your head hurt (in a good way) from all the deep thoughts and ideas. See my ode to Klosterman and this book here.

Good quote: “We now have immediate access to all possible facts. Which is almost the same as having none at all.”

Shadow Divers: The True Adventure of Two Americans Who Risked Everything to Solve One of the Last Mysteries of WWII
Very few non-fiction books keep you on the edge of your seat. Most are boring. This one reads like a thriller. It’s an amazing story about a topic — deep sea diving — I went in knowing nothing about, but came out of it with a much deeper appreciation.

Good quote: “An excellent diver boards the boat with a plan. For days, maybe weeks before the trip, he contemplates the wreck, studies its deck plans, memorizes its contours, decides on a work area, sets reasonable goals, then constructs a strategy to accomplish those goals.”

When Breath Becomes Air
If you read this book and don’t get a little misty-eyed by the end, it’s possible you’re actually one of the host robots on Westworld. This one may have hit me so hard because I have a young daughter, but it’s one of the best books I’ve read in a long time that truly puts life into perspective.

Good quote: “Science may provide the most useful way to organize empirical, reproducible data, but its power to do so is predicated on its inability to grasp the most central aspects of human life: hope, fear, love, hate, beauty, envy, honor, weakness, striving, suffering, virtue.”

The Win Without Pitching Manifesto
This one is a short read but it’s packed full of great ideas and best practices for how to do business, sales, presentations, communication and writing. Anyone who sells a product, service, works with clients or works in sales can benefit from this book. It changed my perspective on a number of standard business ideas.

Good quote: “Trying to inspire someone who does not recognize that he has a problem is a recipe for defensiveness and resentment. Inspiration is something we must save for the interested.”

Nobody Wants to Read Your Sh*t
Pressfield explains the writing process better than anyone I’ve ever read (The War of Art is also excellent). This one is also applicable to anyone who wants to better understand story-telling, movies, novels, advertising or sales. He not only shows the reader how to tell stories the right way but he shares some great ones of his own, as well.

Good quote: “When your novel or screenplay is disintegrating before your eyes, it is not a bad idea to fall back on thinking like an ad man. Ask not, “What is the solution?” Ask, “What is the problem?””

Ready Player One
My science fiction diet is usually of the visual variety in the form of movies (the formula: Tom Cruise+the future+improved technology = I’m in),  so I don’t typically read much in this genre. But this book was a fascinating look into the potential for virtual reality in the future. There was plenty of technology and ideas in this book that felt like they could really happen some day. And if you’re not a huge sci-fi reader, it sounds like Stephen Spielberg has signed on to make the movie version. It should make for a good one.

John D. MacDonald Travis McGee Series
I love a good mystery series with a wise-cracking detective or private eye. Some of my all-time favorite mystery novel protagonists include Spenser, Lucas Davenport, John Corey, Joe Pickett and Jack Reacher. I was told that Travis McGee was the original mold for all of these characters that came after him so I started this one from the beginning this summer. MacDonald began writing the McGee series in the mid-1960s, but they hold up extremely well (I’m three or four into it right now). This one makes for a great vacation read.

The Cormoran Strike Trilogy
Speaking of a good mystery series, this one by J.K Rowling (under the pseudonym Robert Galbraith) was good enough to read over the course of a few months. The main character isn’t your typical alpha-male private eye, but that’s a good thing. The books are a tad longer than I’m used to for fiction, but it allows for some very deep character development. The last one ends with a cliff-hanger so I’m hopeful we’ll see another one soon.