Every year the entire global financial system avoids complete and utter collapse the chorus of anger grows louder from a subset of people who claim markets are some combination of broken, rigged and manipulated.

Markets are untethered from fundamentals and nothing more than a casino.

Central bank intervention, massive stock buyback programs, the rise of passive investors, high-frequency trading and interest rate manipulation have made it impossible for investors to correctly handicap the markets.

I can sympathize with some of the people in this camp. It often comes from a place of career risk since we’ve seen such enormous shifts in the asset management business over the past few decades.

Markets are constantly evolving so it’s impossible to gauge the exact impact these variables have had on prices. There are no counterfactuals. But people who assume this time is somehow distinctly different than the past need to read a history book or two.

When were the markets ever not somehow broken, rigged, manipulated or untethered from fundamentals? When was the glorious period where markets were completely free and devoid of intervention from the forces of either governments, central banks or investors who overstepped the bounds of fair play?

When the first equity markets were being formed during the 1600 and 1700s, there was basically a mania every cycle that contained some combination of greed, excitement, innovation and bad actors who took advantage by running pump and dump schemes to become fabulously wealthy on the back of inflated share prices sold to an unsuspecting public.

Brokers, or stockjobbers as they were called, in the early days of the London Stock Exchange routinely pushed around the prices of smaller companies for personal profit.

The same thing happened during the numerous railway bubbles of the 1800s. Regular investors would get swindled as markets alternated between boom and bust. Memories were short so the next generation would fall for the same tricks all over again the next time around.

It was common for speculators to corner certain segments of the market to drive prices to their liking during this time. Jay Gould did this with the gold market in the 1800s, using the government as an unwitting ally in his scheme.

During the Civil War Congress pumped $150 million of cash into the system (a lot of money at that time), hoping to juice the economy and increase inflation.

Without an infusion of cash and confidence from John Pierpont Morgan, the entire banking system may have gone under during the panic of 1907. This was literally one man keeping the financial system afloat, which came at a time when there was no Federal Reserve (the Fed was created in the aftermath of this crisis).

In the early-1900s many investors and traders operated out of bucketshops. These shops were set up so people could gamble on the markets using margin.

Buffett noted in his shareholder letter this weekend how it wasn’t until a book was published in 1924 that people realized stocks should make for better long-term investments than bonds.

Discounted cash flow analysis didn’t really even exist until John Burr Williams proposed the idea of using the present value of future net cash flows as a way to value businesses in the 1930s.

The stock market was more or less a barren wasteland following the Great Depression until the 1950s because an entire generation of investors was scarred from that massive crash.

Wall Street wasn’t really a desirable place to work until a new generation came in during the 1960s.

In the 1970s, the hedge fund Wild West was dominated by Michael Steinhardt, who has one of the most impressive track records of all-time. Steinhardt was an innovative trader, whip-smart and notoriously hard-working. But his firm also pushed the bounds of what was legal.

One of the ways in which he made money was through buying large blocks of stocks from brokers who were still adapting to a more institutionalized investment world. They would sell to him at a discount and he would turn around and sell those same shares at market price for an immediate profit.

His firm also traded in the highly unregulated third markets where transactions weren’t even reported to the SEC. Regulators have since cleaned up these practices but they ended up being huge profit centers for Steinhardt in the 1970s.

In the late-1970s and early-1980s, the Federal Reserve pushed short-term interest rates to upwards of 20%.

Once Alan Greenspan took over the Fed, interest rates were basically cut at every whiff of trouble in the markets.

Since the dawn of the markets, governments have played a role, right or wrong, in how they function. And there have always been investors who are willing to push the limits of fair play in order to make money.

And if markets did ever trade exclusively on fundamentals, any investor could simply type in a stock ticker on Yahoo! Finance, compare the various price ratios across companies and industries to pick the best stocks.

Under this scenario, there would be no need for 6 billion shares to trade hands on the New York Stock Exchange every day because people would simply hold the best investments and occasionally sell the bad ones.

Every buyer and seller must assume fundamentals are detached from reality with every trade they make in the markets. Otherwise, why would anyone ever transact?

And if you study what the Federal Reserve actually does when they “print money” (essentially an asset swap between bonds and bank reserves) it likely wouldn’t have the impact most market participants believe. It’s mostly psychological.

But that’s the point. Markets are psychological! Economic prosperity is a state of mind. It’s all just a big jumble of competing opinions, goals, time horizons, resources, data, analysis, emotions and personalities.

Having said all of this — markets are some parts broken, rigged, manipulated and often unfair — they still mostly get things right over the long haul.

The market is not like a casino. At a casino the odds of every game are known in advance. Those odds show that the house has at least a slight edge over the player in those games. The longer you stay at a casino the worse your odds of winning. The opposite is true of the stock market: 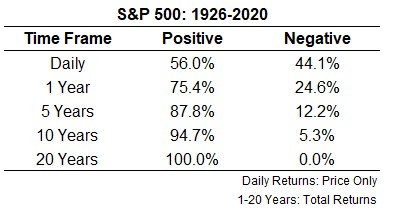 These aren’t odds like you see in a casino and this isn’t guaranteed going forward but your probability of winning generally goes up the longer you stay invested in the stock market.

Fundamentals only truly matter over the very long-term. The rest of the time, markets are driven by sentiment, trends, extrapolations, misplaced expectations, investor emotions, and wild guesses about the future.

Markets also help corporations raise capital to grow and innovate. They allow investors of all shapes and sizes to invest in public companies around the world and earn a piece of corporate profits.

Edwin Lefevre published the following all the way back in 1923:

Nowhere does history indulge in repetitions so often or so uniformly as in Wall Street. When you read contemporary accounts of booms or panics, the one thing that strikes you most forcibly is how little either stock speculation or stock speculators today differ from yesterday. The game does not change and neither does human nature.

Sure, the market structure has changed since then. Central banks are more involved and things have become far more institutionalized over time.

But the human element is the constant. And anytime humans are involved the markets are bound to be somewhat broken because we’re not perfect.

Markets have always been rigged but so too have our emotions about how we deal with them.

Complaining about the Fed and market fundamentals may be cathartic but it does nothing for your bottom line (unless, of course, you’re selling newsletters).

We have to invest in the markets as they are, not as we wish them to be. That means becoming comfortable with the fact that markets will always feel like they’re rigged, manipulated and broken.

Every market environment is different in numerous ways. But some things never change meaning there will always be people who are unhappy about how things are playing out.