It’s hard to find many investment books since the turn of the century that don’t include the research paper from Roger Ibbotson and Paul Kaplan called Does Asset Allocation Explain 40, 90, or 100 Percent of Performance?1

The study was meant to decipher whether it was asset allocation or market timing and security selection that drove portfolio performance. The conclusion showed that more than 90%of a portfolio’s long-term variation in return was explained by its asset allocation, leaving only a small amount that can be explained by an investor’s ability to time the market or successfully choose individual securities.

Of course, research papers don’t perfectly describe the real world. There’s no way to know for sure how accurate this figure is. But the data is fairly clear at this point that successful market timing and active security selection are two things the majority of investors aren’t very good at. So by default, asset allocation will almost always be the huge driver of your returns.

Most investors think of asset allocation in terms of the traditional asset classes — stocks, bonds, cash, and other investments. That “other investments” category has become a huge player in the institutional investment landscape in recent decades with the enormous growth in alternatives.

I saw firsthand a number of endowments, foundations, and pensions who overreacted to the massive spike in volatility from the financial crisis by investing heavily in alts, many to their own detriment as markets bottomed in late-2008 and early-2009. Not only were these funds fighting the last war, but they overreacted to a situation we should come to expect every couple of decades or so in the markets.

The Omaha World-Herald recently published an expose on the Omaha Public Schools’ (OPS) pension fund which provides a perfect example on how a change in investment strategy at the wrong time can be a killer, not only to investment performance but also to the real lives of the people who are dependent on that money.

Here’s how to wreck a pension fund in just 3 easy steps: 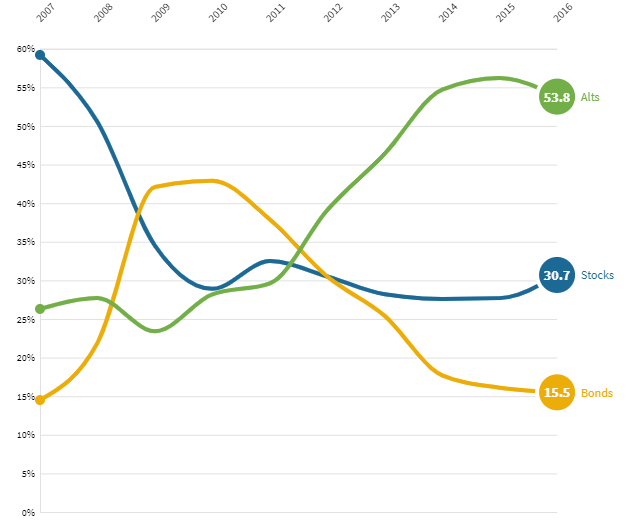 The former top executive of the fund claimed the main reason for these changes were that he was looking for, “something more stable than stocks,” but also returns in the “teens.” At the end of 2009, the investment committee actually projected higher returns in alternatives than stocks but with lower volatility.

These expectations were a tad unrealistic.

Step 2. Invest heavily in things you don’t understand. The OPS actually helped themselves going into the financial crisis by lightening up on stocks beginning in 2007. The problem is they continued to bail even as stocks rebounded. And the alternatives they replaced stocks with were eclectic, to say the least:

They bailed heavily on the stock market. Then they put most of the pension fund’s assets into a growing list of nontraditional, often speculative, investment alternatives — among them real estate in Mumbai, India; international shipping; Ukrainian agriculture; oil companies in Kazakhstan and Brazil; timberlands in Tennessee; distressed housing in Florida, New Jersey and Nevada, and more.

The board members making these investment decisions were former teachers, school board members, school superintendents, and local business leaders. There’s no way they had the expertise required to sign off on these types of investments.

Investing in alternatives is hard enough as it is when you consider their illiquidity, high fees, and lack of publicly available information. But if you aren’t an expert in these areas the hurdle rate becomes nearly insurmountable.

Step 3. A faulty investment process. Not only were the board members of the pension ill-suited to make investment decisions in specific funds or managers, but they didn’t have a formal investment process in place. The former chief executive of the fund would pitch a single alternative investment and in almost all cases there wouldn’t be a single negative vote against it.

They said they hired consultants to help with the process but the documentation doesn’t back that up:

As OSERS chose a dozen new alternatives between 2009 and 2013, meetings minutes and records make no mention of consultants being hired to conduct due diligence or of presenting such reports. When asked to produce due diligence reports for five specific investments, OSERS officials said they had none.

Not only was due diligence lacking, but there were also conflicts of interest in the investments they chose:

Records aside, the best evidence of the lack of due diligence can be found in simply looking at which firms got the business. By all appearances, Smith merely picked investments offered up by firms OSERS was already doing business with.

Of the 16 new alternatives, 12 were with firms OSERS invested in already. Another was affiliated with First National Bank of Omaha, the employer of one of the OSERS trustees.

The majority of the funds they invested with not only underperformed the stock market but their own benchmarks, as well. Many of the funds also lost money on an absolute basis.

Add it all up and here’s what happened:

The unfunded pension liability ballooned from $138 million in 2007 to over $770 million now. OPS was forced to slash its budget by $30 million, $19 million of which was directly tied to payments required to add to the pension fund. The school system terminated 180 jobs. Teachers were forced to cut back on school supplies.

The only solution to shore up the pension for the future will be more budget cuts, higher taxes, and lower benefits for the teachers who hope to draw from the plan in the future.

Institutional investors control trillions of dollars, so the financial services industry gives this space a lot of attention. When thinking about all of the interesting things you can do from a portfolio perspective, it’s easy to forget the actual beneficiaries (read: people) who are impacted by these decisions.

This OPS story is extreme and although many of their wounds were self-inflicted, there was also an element of bad luck involved. But making huge changes to a portfolio heightens the element of luck in your investment outcomes. Making bad decisions during bad markets can be a killer to your portfolio.

Investing is never an easy proposition because no one knows what the future holds and there are far more variables outside of your control than most realize.

But every organization can control the following variables, which can put you on the right track:

These items are all fairly simple, but they’re not very sexy so they’re easy to ignore.

1Hand up on this one. I definitely used it in my book.