One of the strange subplots of the past decade or so in the markets is bad behavior has been rewarded.

You’re not supposed to chase yield but chasing yield has worked as interest rates continued to fall year after year.

You’re not supposed to day trade or speculate on stocks in the short-term but day-trading and speculation led to enormous gains for even the most inexperienced of investors in 2020.

You’re not supposed to concentrate in a single region because of home country bias but the United States has crushed the rest of the world since the end of the 2008 crisis.

You’re not supposed to concentrate in a single sector but tech stocks have dominated every other segment of the market for years now.

The market can stay solvent longer than you can quote Warren Buffett or something to that effect.

These themes seemed to go into overdrive last spring when the pandemic hit our shores. Tech stocks outperformed during the crash AND the ensuing rally. It didn’t seem fair to anyone who owned anything outside of these companies.

Then something funny happened around September.

Everything else began to outperform tech: 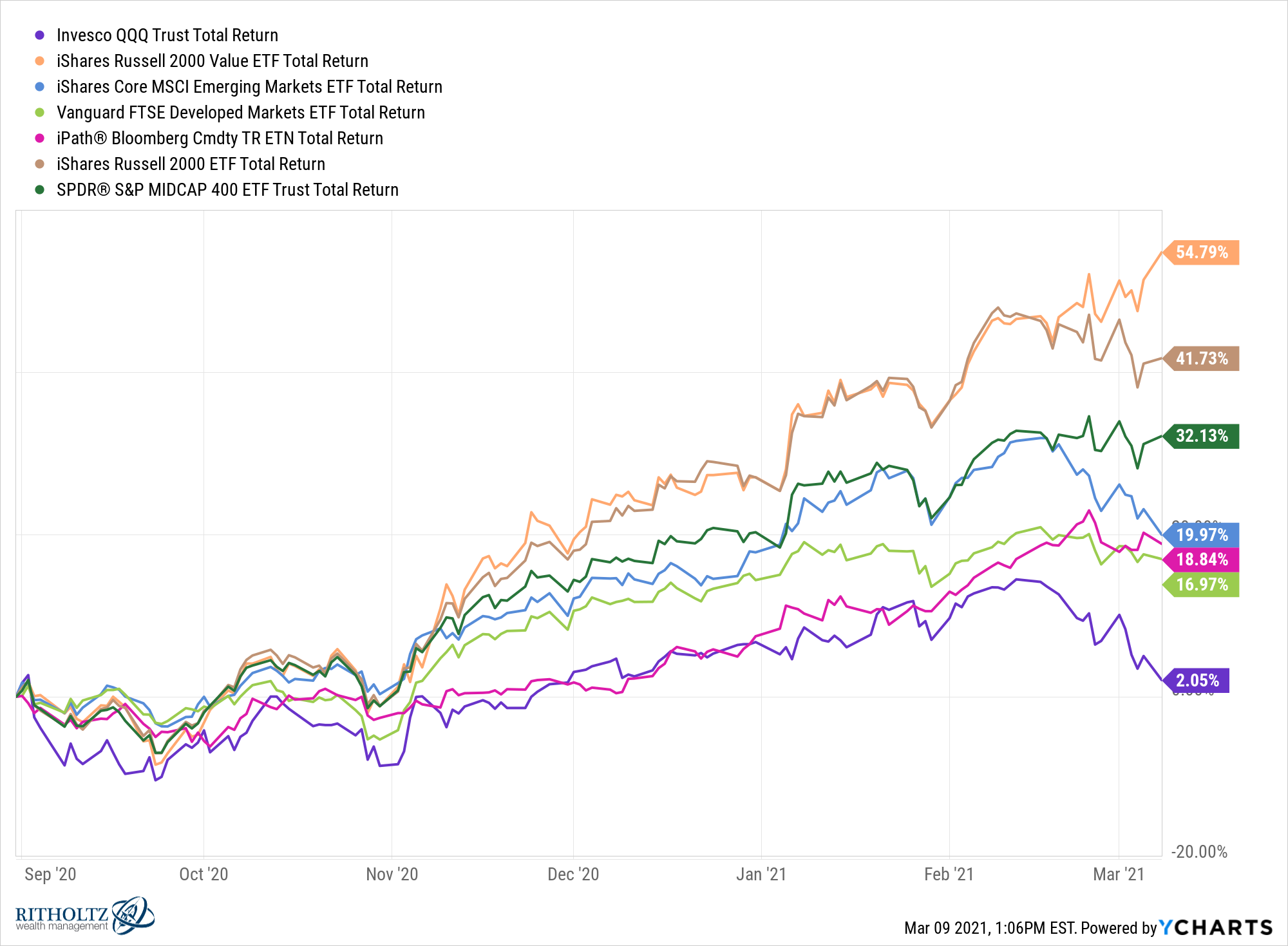 Even the former pariahs, energy and financials, have outperformed tech by a wide margin: 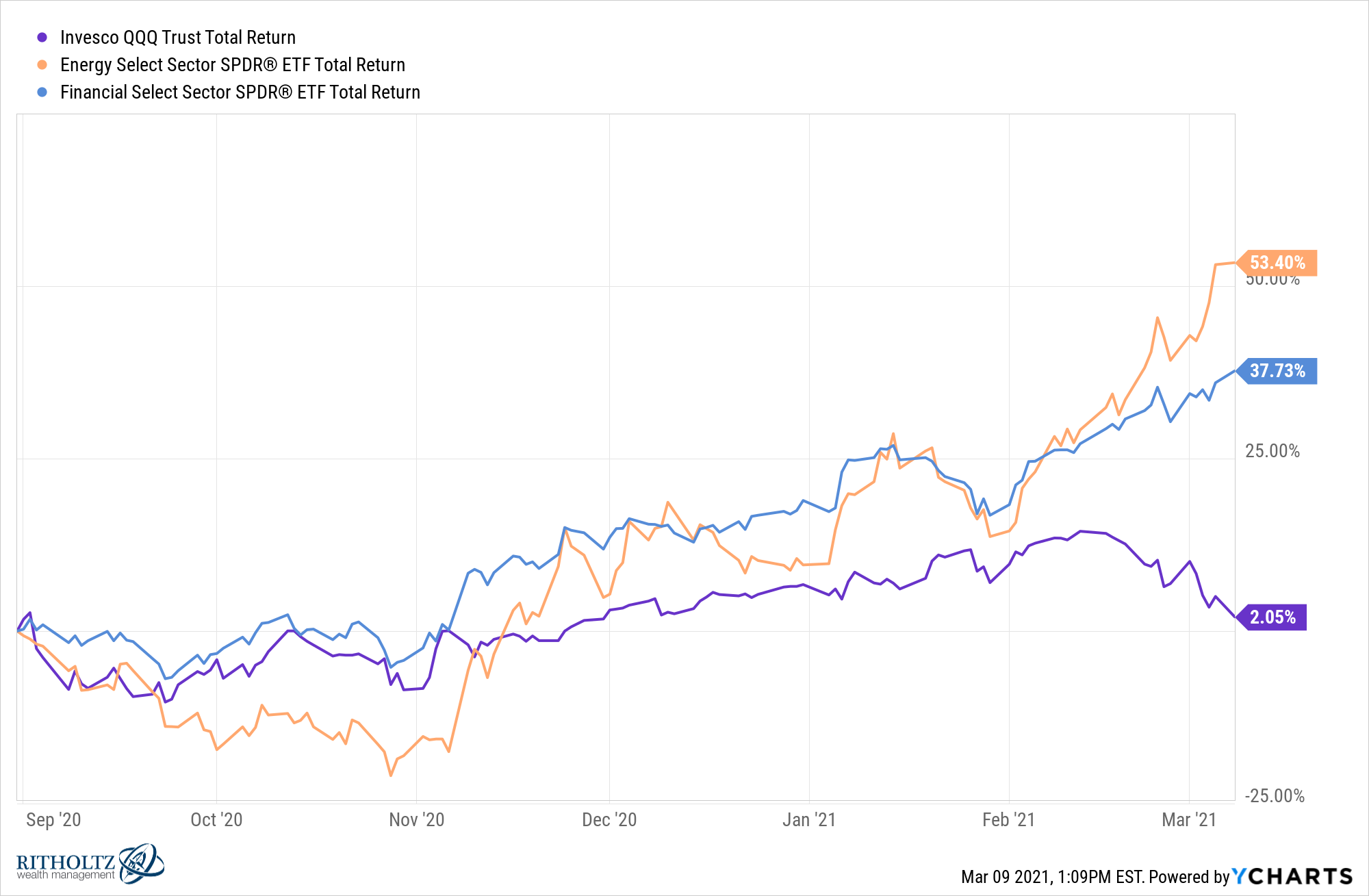 To be fair, this is a 6+ month period. Zoom out over 3, 5 or 10 years and tech stocks have still annihilated everything. It’s hard to figure out trends like these from short-term moves.

Is this regime change or a one-time head fake?

Will the dollar rollover so emerging markets and foreign stocks finally outperform?

Will small caps take the baton from large caps and keep this thing going for another couple of years?

Are we on the precipice of mean reversion or is this the meanest reversion that simply goes back to the trend of old?

The hard part is there are no all-clear signals when investing. There was no catalyst for value to start outperforming and tech to start underperforming. That’s typically how this works.

My only answer here is diversification.

Yes, diversification means always having to say you’re sorry about something in your portfolio. But spreading your bets among different parts of the stock market takes away the extremes. And while those extremes can include amazing gains, as we’ve seen in tech stocks for the past 10+ years, they can also include amazing losses.

Now the current tech run wasn’t exactly the same as the dot-com bubble. There are a number of differences between now and then.

Are we going to see similar losses this time around? I don’t know. It’s possible. It’s also possible mean reversion could see tech stocks underperform on a relative basis to even things out.

Or maybe we really are in a new paradigm where tech stocks outperform all the time.2

The point is no one really knows and anyone that says they do hasn’t spent enough time studying market history or human nature.

Spreading your money across a wide range of investments, asset classes, and geographies is the ultimate form of saying, “I have no idea what’s going to happen in the future.”

For those of us who cannot predict the future, we diversify.

Further Reading:
Nothing Fails Quite Like Success on Wall Street

1And the peak-to-trough drawdown in the Nasdaq was more like 80%.

2I don’t actually believe this.