Ben Carlson · What If Interest Rates Don’t Matter As Much As We Think?

Following the Great Depression, Wall Street was a barren wasteland.

No one wanted to work in finance. The stock market was dead money for years. Volume had all but dried up on the exchange. This was not a place up-and-comers wanted to work.

That all changed after the WWII boom that carried over into the 1950s.

By the time the 1960s rolled around an entire crop of new investors who weren’t around for the carnage of 1929-1932 descended on Wall Street and the Go-Go Years were born.

Growth stocks were en vogue again, led by the spectacular performance by the likes of Fidelity’s Jerry Tsai. Then a brutal bear market from 1968-1970 saw the S&P 500 fall by 36%. Growth stocks were down even more.

The end of the Go-Go Years led investors into the loving arms of the one-decision, Nifty Fifty blue-chip stocks in the early-1970s. So many investors rushed into names like McDonald’s, Disney, Xerox and Polaroid that PE ratios on these stocks went to astronomical levels, 60x-80x earnings in some cases.

Investors went from speculative growth stocks to over-priced blue-chips in a matter of years.

Like most periods of raging speculation, both the Go-Go Years and the era of Nifty Fifty stocks began innocently enough as good ideas that simply got taken too far. 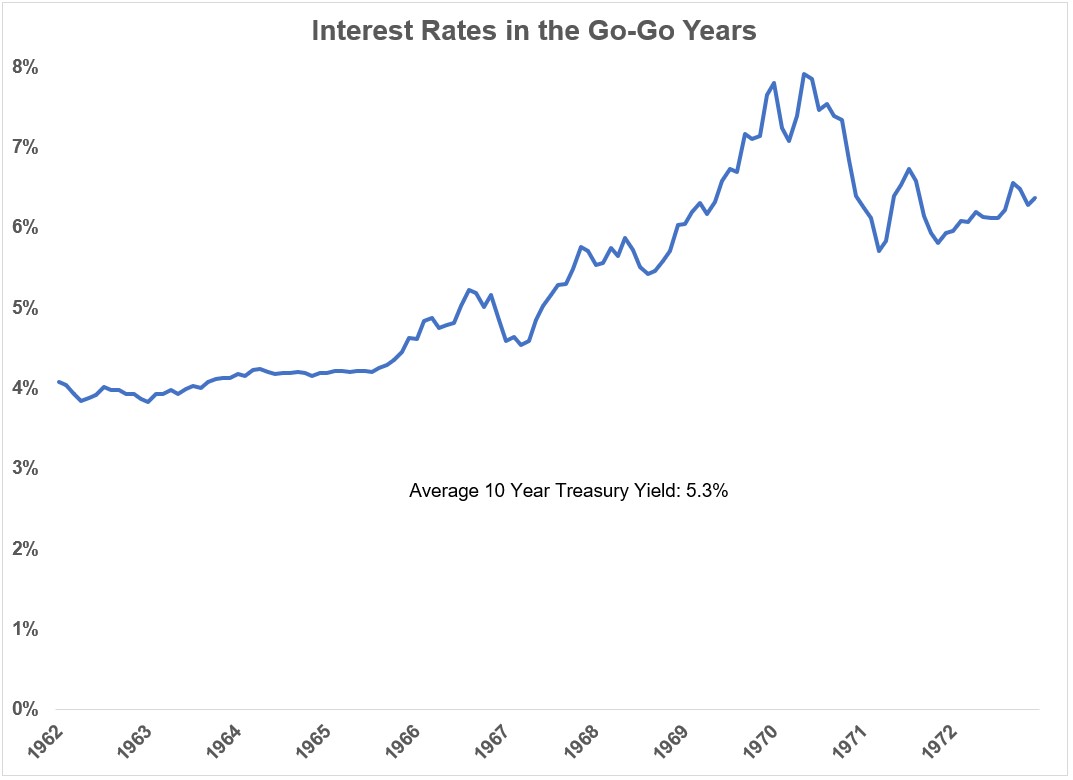 The 10-year yield was moving higher for much of the Go-Go Years in the 1960s and averaged more than 5% from 1962-1972. And it’s worth noting, inflation was moving ever-higher during this period as well.

Interest rates were even higher during the dot-com bubble of the mid-to-late 1990s: 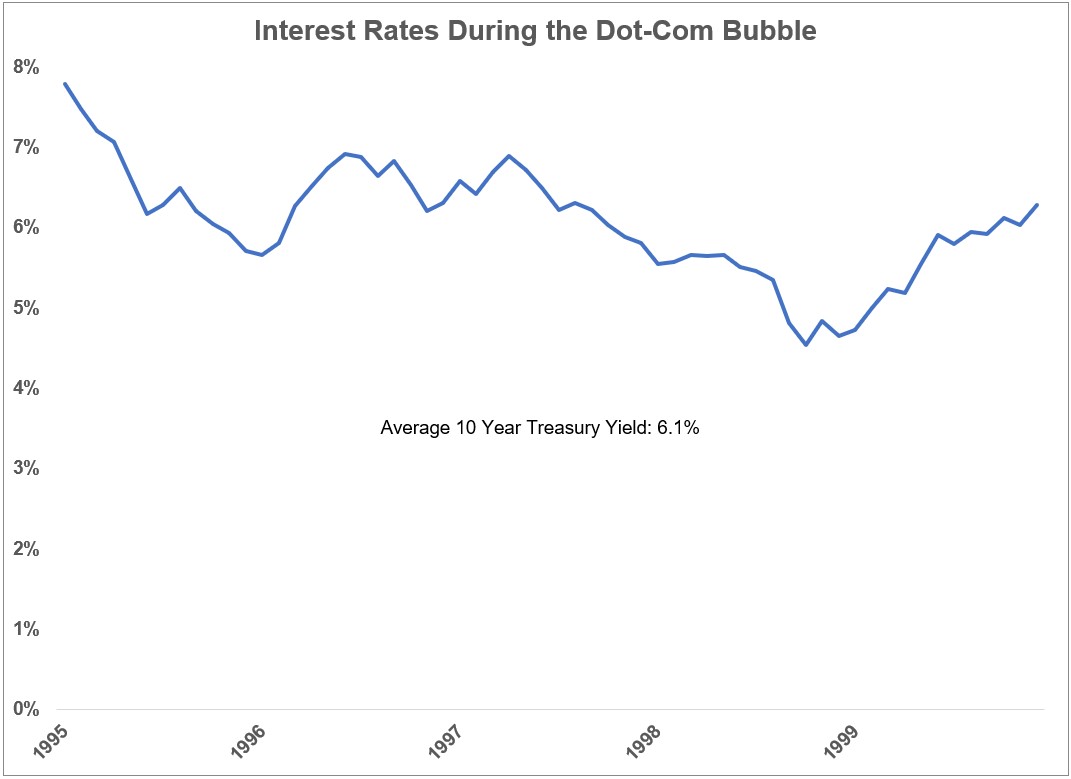 From 1995, when stocks began to take off like a rocketship, through 1999 when it was just about to end, the 10 year treasury yielded more than 6% on average.

Many investors and pundits these days assume the only reason stocks have been up so much over the past decade or so must be because interest rates have been so low.

It’s obvious the Fed is propping up risk assets, right?

Well investors in the 1960s, 1970s and 1990s were more than happy to take speculation to another level with rates much much higher than they’ve been since 2008.

The same is true of the housing market.

You can see the housing bubble really took off in the early-2000s and leveled out around 2006 before the crash began in 2007: 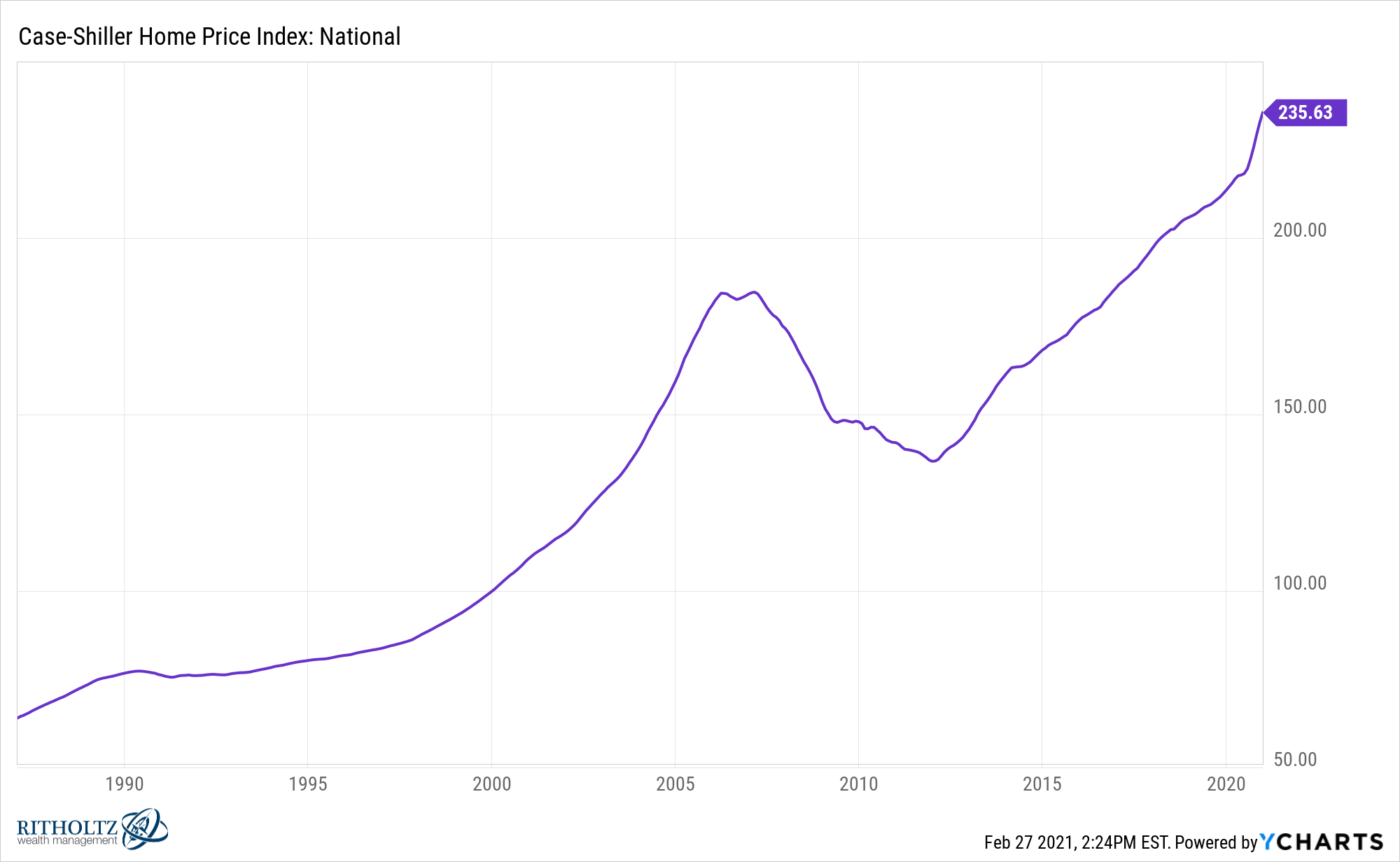 Now look at mortgage rates in that time: 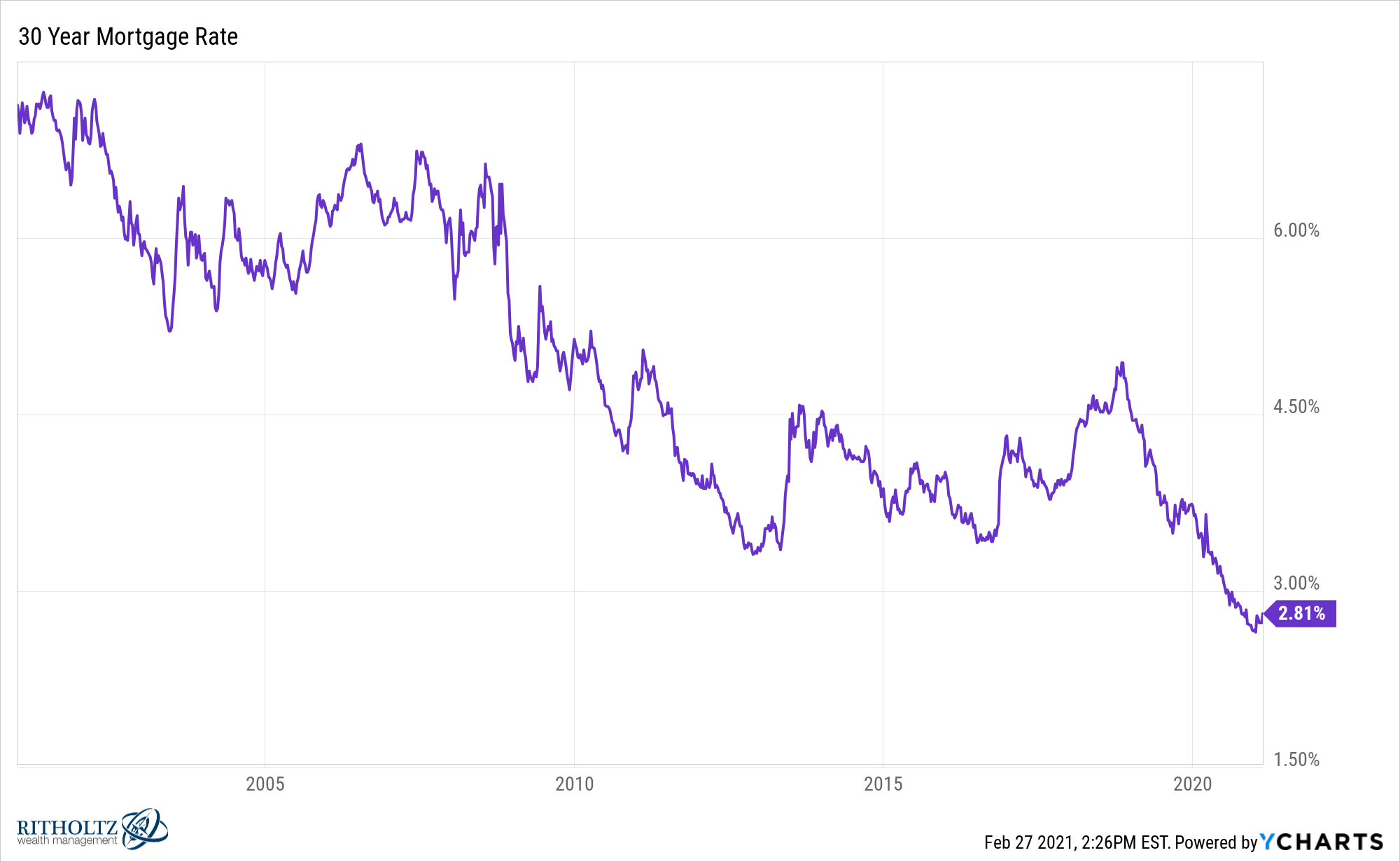 The greatest housing bubble of all-time didn’t need sub-3% mortgage rates for a trip to crazytown, just lax credit standards and a country in search of another bubble to take part in.

Or how about the late-1970s and early-1980s when mortgage rates were even higher: 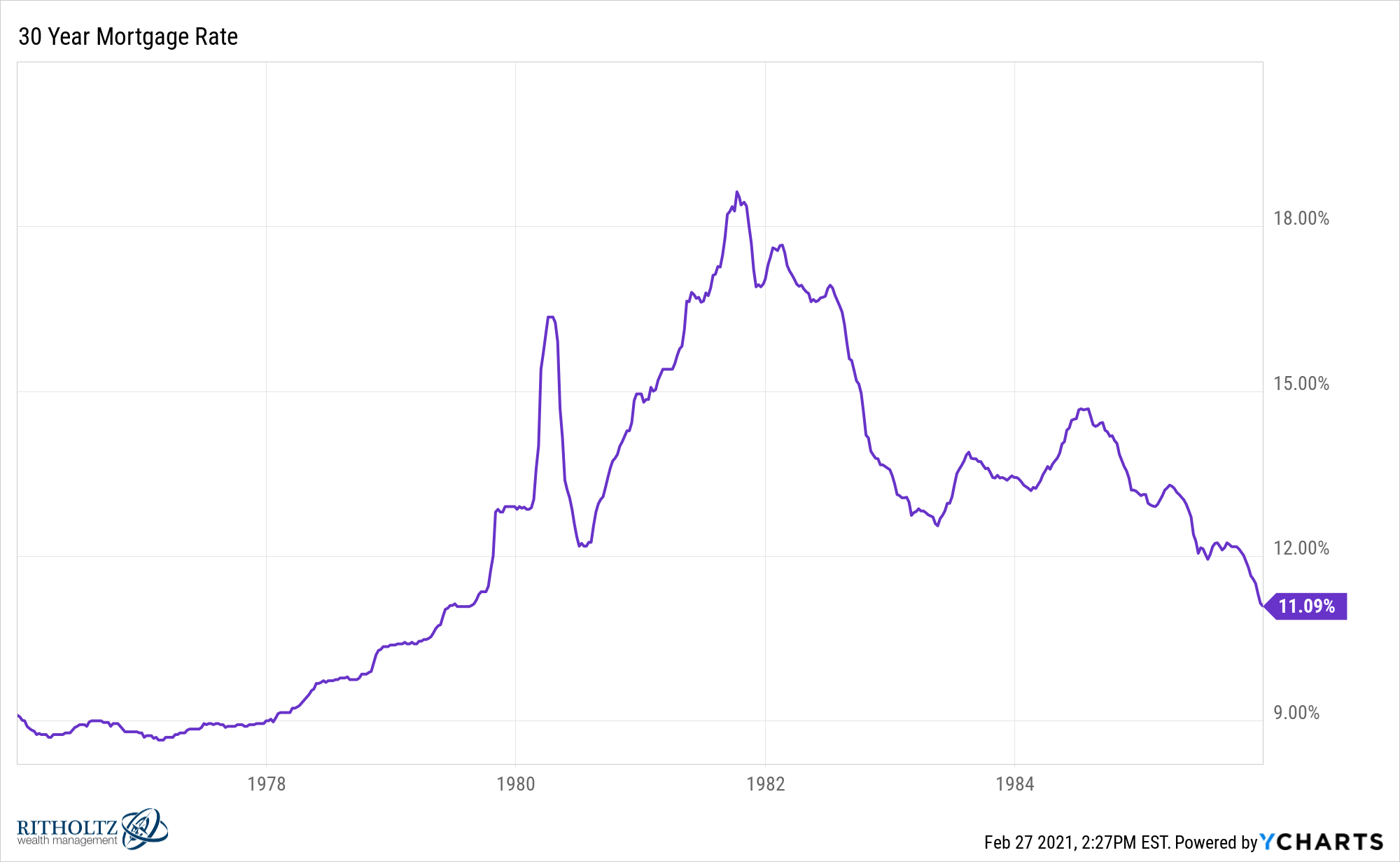 Housing prices must have crashed, right?

Interest rates do matter. They provide a hurdle rate, discount rate, benchmark, alternative to risk assets, however you want to look at it.

But they aren’t the be-all, end-all to the markets some would have you believe.

There are so many other factors at play that determine why investors do what they do with their money — demographics, demand, risk appetite, past experiences and a whole host of psychological and market-related dynamics.

They don’t force investors into lottery-ticket traders looking to get rich overnight.

Humans are just fine doing that on their own, regardless of interest rate levels.

Could there be a psychological impact if rates rise from here or fall from here or go nowhere for years on end?

Sure, it’s certainly possible investors could freak out because interest rates have been so low for so long.

Just because stocks have done fine when rates have risen in the past doesn’t mean it will happen in the future.

But interest rate levels, in and of themselves, aren’t the sole cause of every market movement.

They are just one factor among many that impact how people allocate their assets.

And maybe, just maybe, they don’t matter as much as we all think.

Further Reading:
The End of the Go-Go Years

1To be fair this was the nominal return. Inflation was sky-high in this period. But even on a real basis after accounting for inflation, housing prices were up 11% in this time from a rush of baby boomers looking to plant their roots.