One of my favorite Curb Your Enthusiasm episodes of all-time is the Anonymous Donor:

It entails Larry’s ongoing feud with Ted Danson. And in true Curb fashion, hijinx ensues after he switches the wing from ‘Donated by Larry David’ to ‘Donated by Anonymous.’

It shouldn’t be this way, but there can be an internal tug-of-war between making your charitable giving public or keeping it anonymous.

On the one hand, it can seem self-serving to some when people discuss their charitable works in public.

On the other hand, it can potentially inspire others to give back when they see someone else giving back.

I’ve always struggled with this and certainly haven’t spent enough time talking or writing about the subject. Maybe I was worried it would come off as holier-than-thou to discuss giving money to charity. But this year has driven home the point that it doesn’t really matter.

I feel guilty in many ways about how the last year or so has transpired.

Millions of people have lost their jobs or businesses while the stock market has taken off to new heights. Housing prices are up while many people can’t afford to buy a house or pay their rent. This crisis has only made the rich richer and exacerbated wealth inequality.

People have been punished through no fault of their own by a terrible situation.

To be fair, the people who own financial assets didn’t ask for this either. But if your biggest worry over the past 12 months has been your portfolio, a lack of vacations and more time spent at home with loved ones, you’re better off than the vast majority of the population.

This chart from the Credit Suisse Global Wealth Report shows the number of adults segmented by wealth at the end of 2019: 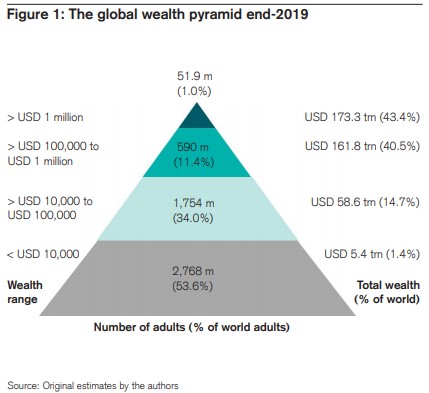 But it’s helpful to put these numbers in perspective to understand just how many people out there could use a helping hand.

When I was getting my MBA I took a class on sustainability that got me interested in some charities that help people in developing countries. I have been giving some money to these organizations ever since.

There are also organizations I give to each year around the holidays because those times are always reminders that it’s important to give back. And when there are natural disasters or some other crisis in the news it’s always easy to discover charities that can help people recover from those situations, so I give to those places sporadically as well.

But the past year has made me realize I didn’t have a great plan in place for giving back on a regular basis. I like to preach the benefits of automating your savings and investing but my charitable giving was always more of a haphazard approach.

People don’t just need help around the holidays or when a crisis hits. There are always people in need.

So I’ve taken a more proactive role in setting up monthly donations to help feed those in need both in my community and abroad. My city is booming over the past decade or so but we still have a homeless population in need. There are people in Detroit who have trouble affording their water bills.1

I’m sure some people prefer to keep their donations or charitable works anonymous and I get that. But sometimes we need some perspective about how trivial some of our everyday problems are when compared with the stuff other people are dealing with.

Giving back can not only help others but also provides the biggest bang for your buck in terms of the relationship between spending and happiness.

Researchers have found donating money to charity has a comparable effect to doubling household income on levels of happiness. And people who donate to charity feel wealthier even if they aren’t according to standard definitions.

There are many ways to lead a rich life.

Michael and I discussed the idea of giving back in respect to the craziness in the markets of late on this week’s Animal Spirits:

1Please feel free to email me any organizations or causes that are near and dear to your heart and I will add them to my list.