These are the two scenarios you’re going to hear about in the financial media in the coming days and weeks now that the Democrats have control of the White House, House and Senate:

Scenario #1. The democrats are going to crash the markets with higher taxes. Buckle up.

Scenario #2. The democrats are going to crank up the dial on fiscal policy in the coming years. That’s going to juice economic growth and inflation. Buckle up.

Taking the politics out of the equation, these scenarios are probably more important to markets and the economy in the coming years:

I tend to agree with the pseudonymous Jesse Livermore that scenario #2 is probably more likely:

This fragile 50/50 majority is shaping up to be fiscal goldilocks.

(1) Enough to get fiscal stimulus through.

(2) Not enough to pass a corporate tax increase.

The Fed has kept interest rates on the floor for years in part because the government never stepped up following the Great Financial Crisis by implementing enough fiscal policy. So we the recovery was tepid, job growth was slow and many households had a difficult time following the biggest economic crash since the Great Depression.

The pandemic has likely changed all that. We’ve already seen an immense amount of government spending in 2020 and it looks like that will continue into 2021 and beyond. Now that voters have seen what the government can do I don’t see how you can put the genie back in the bottle.

Because of a Dem-controlled government and the sheer amount of money spent in 2020, this scenario is now a higher probability than it’s been in years:

I don’t know for sure if this will happen but the prospects are much higher than they were coming out of the last crisis.

Here’s the problem for those who think the current cornucopia of easy monetary and easy fiscal policy can last forever — they can’t coexist in perpetuity. Something has to give.

Let’s say we’re in a situation where we get a huge fiscal stimulus package that sees us through the end of the pandemic. And let’s further assume after the pandemic American consumers consume their faces off on things they’ve been putting off — trips to Disney, dining out, traveling, Taylor Swift concerts, movies, live shows, etc.

Assuming the pandemic opened the door to increased government spending and we see a situation with more stimulus checks, maybe an infrastructure bill, some aid to states and municipalities that amounts to trillions of dollars of spending, we could be looking at a situation in 2021 or 2022 where things get weird economically speaking.

Things will get weird because higher economic growth from increased government spending should logically lead to higher inflation and thus, higher interest rates (at least beyond the short-term rate set by the Fed).

Don’t get me wrong — I think this is a good thing. Millions of people still need help. Interest rates are still low. We have the fiscal capacity for this. But there are sure to be consequences involved when it comes to the markets if things play out like this.

Some questions that come to mind if this transpires:

The last question is the big mystery because it’s been so long since we’ve had rising prices on a sustained basis.

The stock market may care about rising inflation more than the level of inflation itself. I shared this one a couple of months ago:

Historically, the stock market prefers disinflation to rising inflation. And that could play out this time around as well but caveats abound.

We’ve never had interest rates this low before. Government spending is contained not just by inflation but more broadly by political will. Nothing says the new administration will be able to follow through with all of their spending plans.

And the stock market could always completely ignore an increase in the inflation rate for the time being if it’s happening because of an improvement in the economy.

Regardless of the inflation question, the stock market appears to be pricing in more government spending based on the returns from recent months.

Everyone was predicting higher volatility going into the election because of the contentious nature of politics these days. And there has been volatility — it’s just been to the upside.

These are the returns since the day after the election when it became obvious Biden had won: 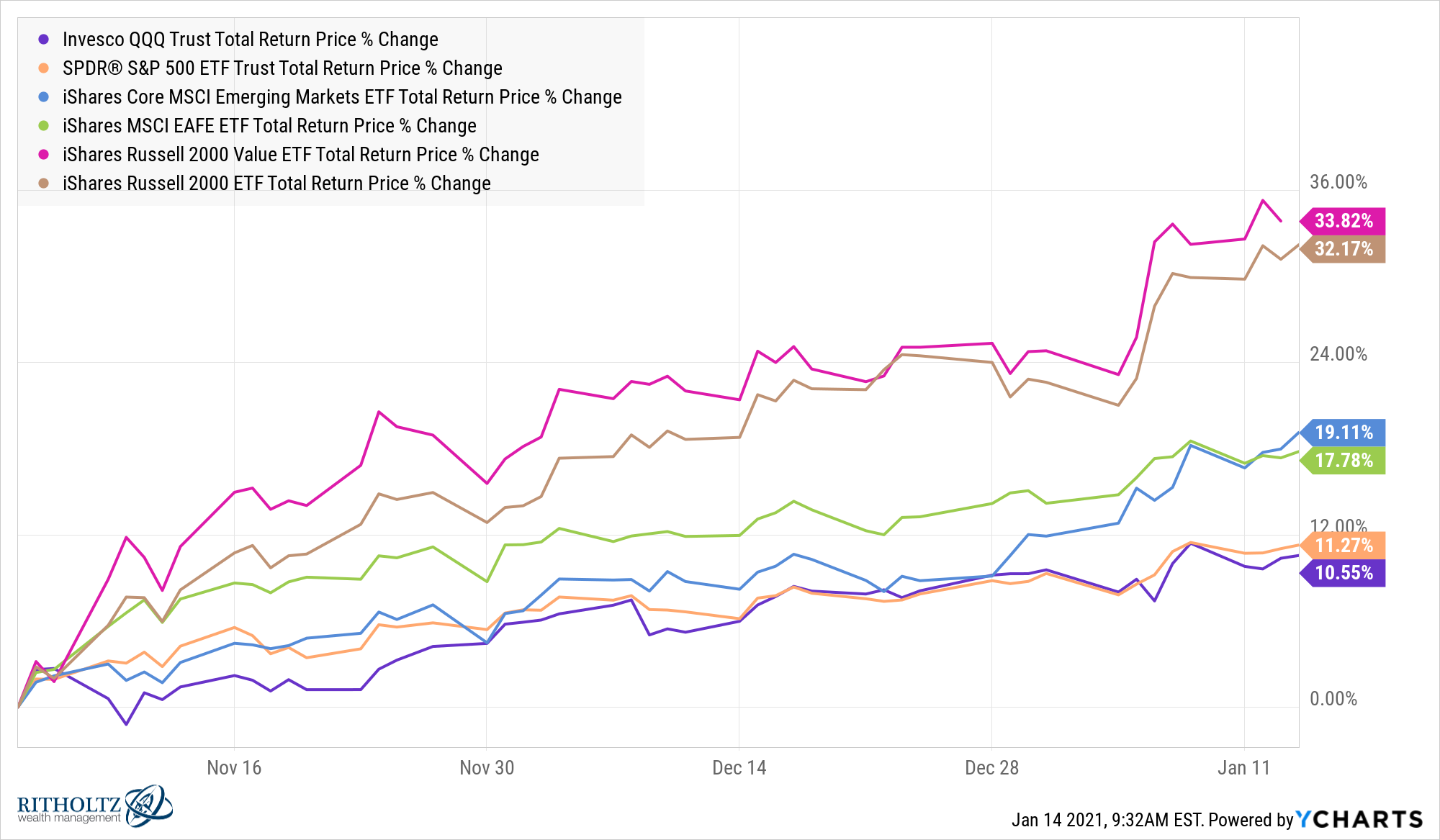 Everything has performed well since the election but small, value, and international are finally outperforming large and tech.

As much as I like to understand the potential reasons for the relative moves within markets and assets classes, most of the time you can simply look at mean reversion. This is probably one of the most underreported reasons for value stocks underperforming growth stocks over the past decade or so.

Maybe the simplest explanation for the underperformance of value stocks this cycle is the fact that they outperformed during the prior cycle. And look at the returns this century — they’re basically identical.

Could a Biden presidency and a Dem majority be the key to a new market cycle and new leadership from small caps, foreign companies and value stocks?

The probability of that move is probably higher now than it’s been in a number of years.

Will these moves continue?

Just because something has a higher probability of occurring doesn’t mean it will necessarily take place.

But investors do not have experience investing under a regime of loose fiscal policy.

That could make the years ahead very interesting and potentially kind of weird.

The past 12 years investors have been well served by “Don’t fight the Fed.”

The next year or two could boil down to “Don’t fight the government.”1

Further Reading:
How Would Investors React If We Finally Get Some Inflation?

1Don’t fight the fiscal? Still workshopping this one.