In World War I and World War II there were a number of ways in which you could show your patriotism to support the United States. Some people volunteered to put their life on the line for their fellow citizens. Others stayed back to ensure there were enough supplies for the war effort by working in factories.

The government also played up the patriotic angle through financial means by issuing war bonds to pay for it.

In World War I, $2 billion in Liberty Bonds were sold to the investing public. This is Charlie Chaplin promoting these bonds to a New York City crowd in 1918: 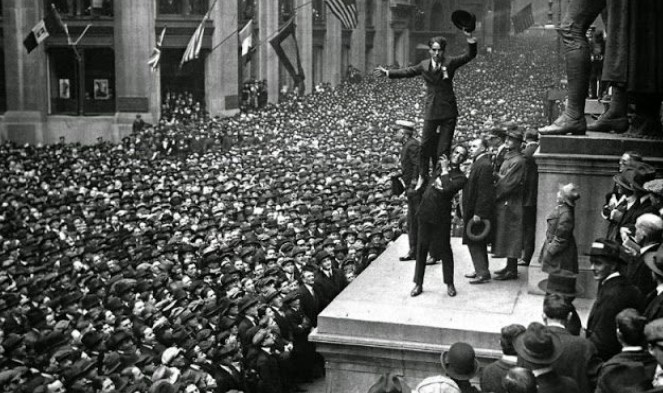 In World War II, those numbers shot up dramatically, as 85 million Americans snatched up more than $185 billion in bonds to finance the war.

The current situation is not exactly a war but we have similar financial needs. Instead of asking for the public to do their civic duty by buying bonds, the government is sending people money and the Fed is the one buying all the bonds.

Jeremy Siegel discussed these differences with Barry Ritholtz on a recent Masters in Business in terms of what it might mean for the economy:

With this liquidity in the economy, as we say, I expect moderate inflation, not — I’m not talking about hyperinflation. And so, I’m nowhere near that. I expect inflation to move up in the next year to 2, 3, 4 percent, 5 percent and maybe run again in 2022 the same way.

So, cumulatively, I expect inflation may be to go up — the price level, consumer price level go up 10, 12 percent over the next few years, maybe 15. Now, don’t forget, we had almost 15 percent inflation in one year back in the terrible years, of the late ’70s.

So, again, this is what I call moderate inflation. I expect bond yields to rise from the current half percent to one, one and a half, two, two and a half, three. They’re still great hedge, short-term hedge. Three, three and a half on treasuries, maybe four.

If we have 15 percent inflation, you wipe out $3 trillion.

So, basically, that’s how you paid for it. Inflation is another way to tax people. It’s a tax on the bondholders.

Siegel lays out an interesting scenario here for the next few years. So much money has been sent out to households (with potentially more to come) we could actually see a spending boom when the virus subsides. That spending boom could lead to a big jump in the inflation rate which would effectively wipe out a substantial portion of the debt we’ve taken on this year.

Siegel estimates inflation running at 15% would basically wipe out $3 trillion of debt, which would mean bondholders who have accepted such low yields would be the ones subsidizing this debt. Ipso facto, the Fed is going to pay for it.

He’s also not calling for hyperinflation but a path back to normalcy after an initial step-up in the price level.

Getting back to our war example, this situation does have precedent. 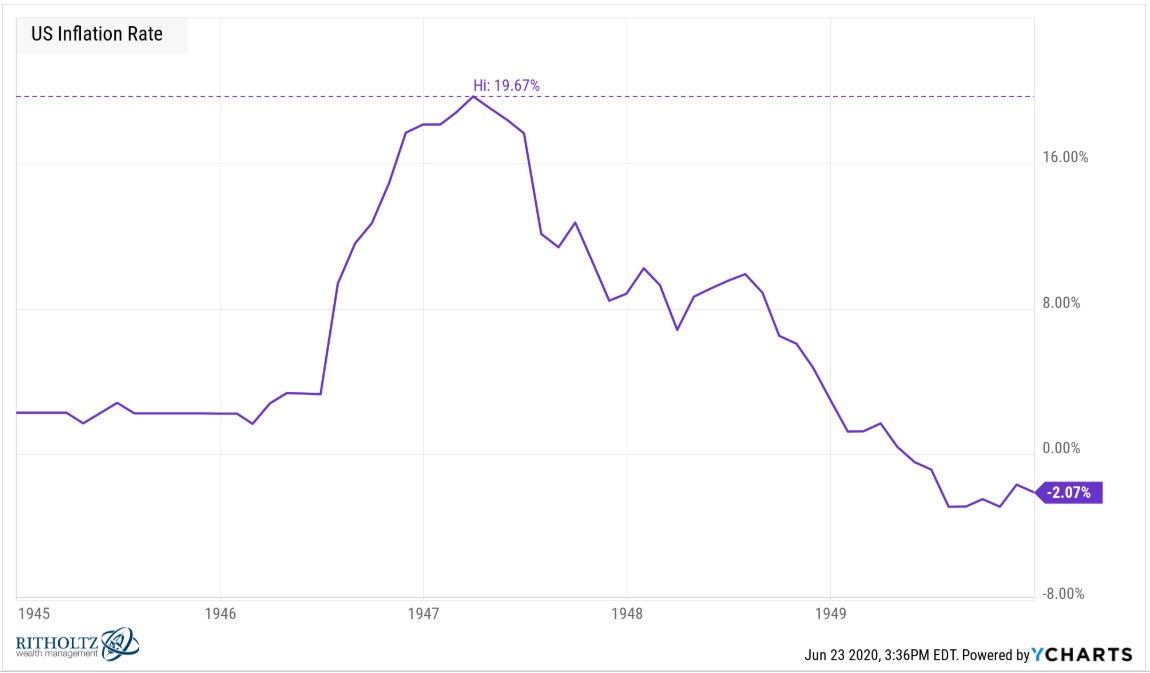 Isn’t this the best-case scenario for the U.S. economy in the coming years?

It would signal a boom in the post-Covid economy. The giant debt load we’ve taken on would be cleared up a bit from an inflationary shock. And getting inflation under control after the initial burst would bring things back to normal (if such a thing exists).

The post-WWII playbook is almost too good to be true and it’s hard to have such a rosy baseline at the moment.

And even if the next few years did play out like this it’s hard to imagine investors keeping their cool if inflation were to see such a spike. Inflation is just not something we’re used to in this day and age.

Here is the inflation rate back to 1914: 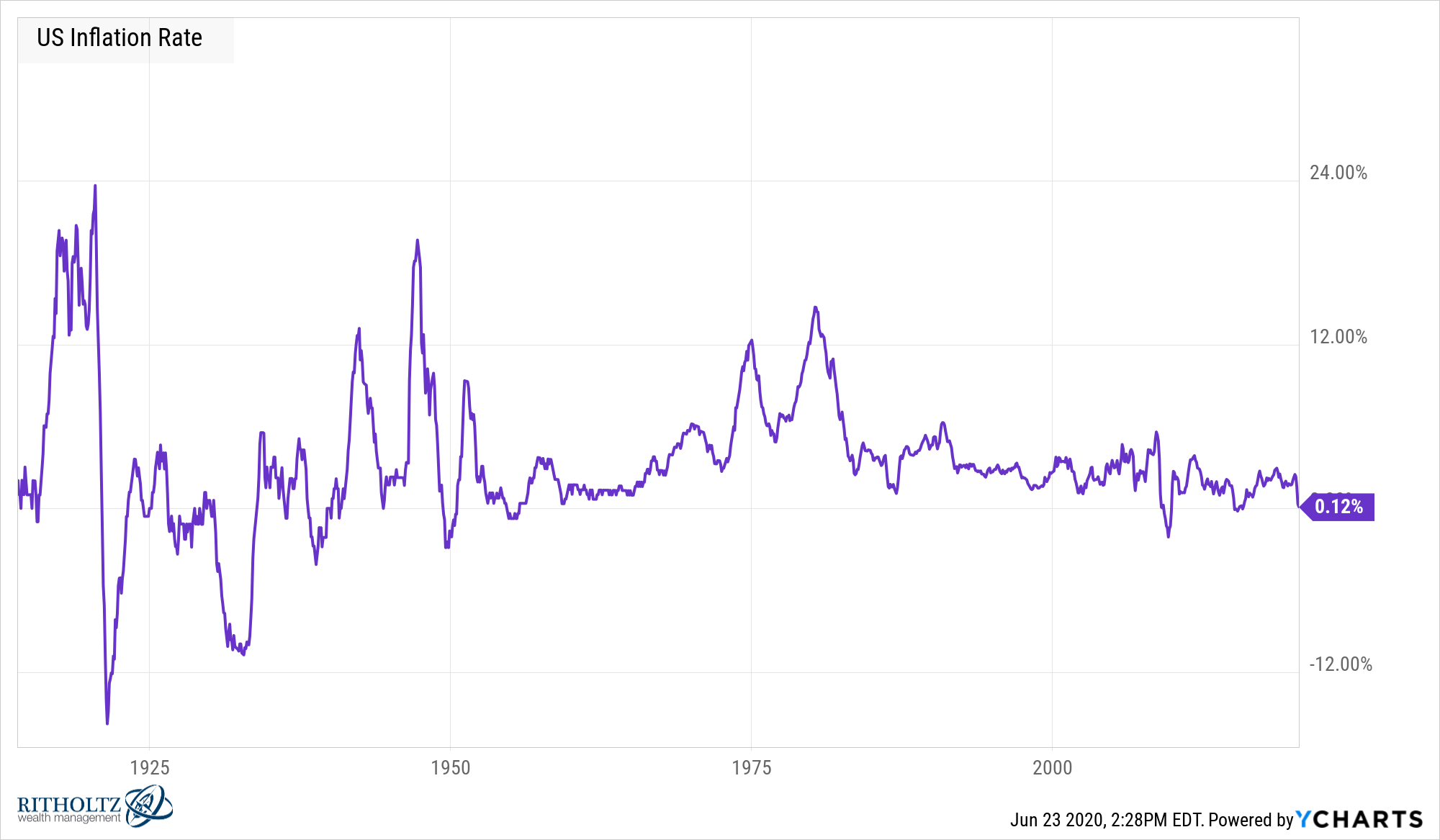 This shows inflation on a trailing 12-month basis. In this time, inflation has been running at greater than 5% more than 22% of the time. It was over 4% nearly 30% of the time.

This century, higher than average inflation is basically non-existent. Since 2000, it’s been running at 5% or higher less than 1% of the time. And it’s only been 4% or more 6% of the time.

Investors who navigated in the 1980s and 1990s were inundated with stories from those who lived through the 1970s about what it was like to have debilitating inflation (it averaged more than 7% for the entire decade).

It’s been nearly 40 years since inflation was relevant. Very few investors remember what that was like. So if we do see an inflationary spike, even if it’s only a brief one, we could see some massive overreactions from investors who have no idea what that feels like.

I don’t pretend to know what those overreactions would look like but it’s not something you can rule out.

It seems silly to worry about Siegel’s inflationary scenario when the latest reading was just 0.12%.

While many investors would likely panic if that were to happen, it would be one of the best-case economic scenarios going forward.

Further Reading:
Inflation Is a Bigger Risk to Stocks Than Rising Rates