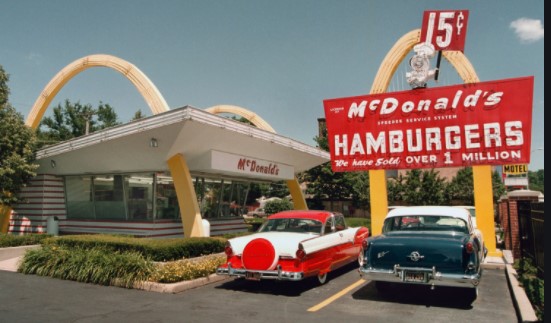 Brothers Dick and Mac McDonald opened a small drive-in restaurant in San Bernadino, CA in 1940 which became a surprise hit for the locals. It turned a profit immediately because it was fast and cheap, making it a destination for teenagers and young families.

Following World War II the brothers foresaw a number of changes occurring in the country, which made them want to focus more of their time building up their customer base of families.

There was a burgeoning middle-class intent on making the American Dream come true. People were buying homes in the suburbs at a rapid clip and families were growing from a post-war baby boom. This meant people had less time to cook because commutes into the city were now longer and people were tending to their growing families.

People were quickly learning what it was like to be busy.

The McDonald brothers got the message loud and clear so they did a deep dive into their operation to discover where they could find efficiency gains in the kitchen to speed up the process. The original menu including hot dogs, BBQ and a variety of sandwiches but the receipts showed 80% of sales were for hamburgers.1

So they simplified their offerings to rely exclusively on hamburgers, fries and shakes. Burgers were less labor-intensive so this allowed them to turn food prep into an assembly line. Dick McDonald later said, “Our whole concept was based on speed, lower prices, and volume.” After closing down for a kitchen overhaul, the new and improved McDonald’s opened for business in 1948.

By the mid-1950s, business was booming and the brothers were sharing $100,000 a year in profits, a tidy sum at that time, especially when you consider the burgers cost just 15 cents a piece.

McDonald’s was doing so well it was only a matter of time before franchise opportunities presented themselves. The problem is, the McDonald brothers had no aspirations to build a fast food empire. David Halberstam explains why in his book The Fifties:

In truth they were already content with their lives and saw no reason to expand—they were making more money than they had dreamed of, they had lovely houses with tennis courts, new Cadillacs every year. Neither had children and therefore there were no thoughts of leaving a financial empire to their heirs. They thought of McDonald’s as a one-shot operation, and they had little interest in a great national network of hamburger stands bearing their name.

But their milkshake2 salesman, a gentleman by the name of Ray Kroc, did have aspirations to build an empire. After witnessingtheir operation firsthand, Kroc immediately saw the potential for expansion to take the McDonald’s assembly line nationwide. Kroc was a high school dropout with a chip on his shoulder who was always looking for an idea or invention that would make him a fortune.

Kroc understood the brothers wanted no part of the constant travel, sales pitches and operational headaches involved in the expansion process so he convinced them to let him take over as their franchising agent.

At age 52, Kroc finally had an opportunity to make a fortune and a name for himself. McDonald’s was a wonderful idea at the perfect time. He wanted to bring that idea to every suburb in the country. By the 1960s, Ray Kroc was rolling out 100 new restaurants a year.

By 1961, Kroc’s name was more synonymous with McDonald’s than the brothers whose name was on the sign.

Eventually, they all butted heads because each had different aspirations and Kroc decided to buy them out. The brothers asked $1 million each after taxes.

Kroc had to go into debt to do it but the pricetag turned out to be a steal. They let him keep the name and Kroc went on to turn McDonald’s into one of the biggest brands on the planet. Before he died in 1984, his net worth was estimated at well over half a billion dollars.

Kroc’s story is more revered in American hustle culture these days but I’m more impressed with the actions of the McDonald brothers in this story. They figured out how much was enough for them and didn’t worry about the opportunity cost of their decision to sell.

They were in a good place financially but even those who have a lot of money have a difficult time being content with what they have.

Walt Disney’s granddaughter, Abigail Disney, discussed the problem with using money as a primary measure of value in life in an interview last year:

They did a study at the Chronicle of Philanthropy years ago where they asked people who inherited money, “What amount of money would you need to feel totally secure?” And every single one of them, no matter what they had, named a number that was roughly twice what they inherited. So that’s what you need to know about money, right? If that is your primary measure of success or value in life, then good luck with that, because it will never feel good.

When confronted with the question of how much is enough money for you, the answer is likely to be “more” no matter how much you have.

The McDonald brothers obviously left a bunch of money on the table. Kroc likely would have pushed them out anyway but they certainly could have held out for a higher price. Imagine how much they would have been worth had they received shares in the equity of the company?

But how much money does any one person need?

A million dollars was real money in the 1960s. The McDonald brothers already had the life they desired and weren’t looking to work as hard as Kroc to turn McDonald’s into the behemoth we know and love today.

Years later Dick McDonald was asked if he had any regrets about selling out for far less than he could have made had he just held onto his ownership stake. No regrets, he said, “I would have wound up in some skyscraper somewhere with about four ulcers and eight tax attorneys trying to figure out how to pay all my income tax.”

Entrepreneurs and business books will always prefer someone like Kroc who sees the world as limitless.

I tend to side with Dick and Mac McDonald who knew their limits and figured out what their personal level of “enough” was.

Further Listening:
A Random Watch Down Wall Street: The Founder

Further Reading:
The Liberation of Limiting Yourself

2Isn’t it ironic McDonald’s became what it is today because of their milkshake salesman yet every time you enter a McDonald’s the milkshake machine is broken?