In February the U.S. economy was humming along nicely with an unemployment rate well under 4%.

Then the pandemic hit our shores.

And the economy was quarantined.

So the unemployment rate spiked to nearly 15%.

Now it’s back down closer to 10% and will probably be under double-digits by this time next month: 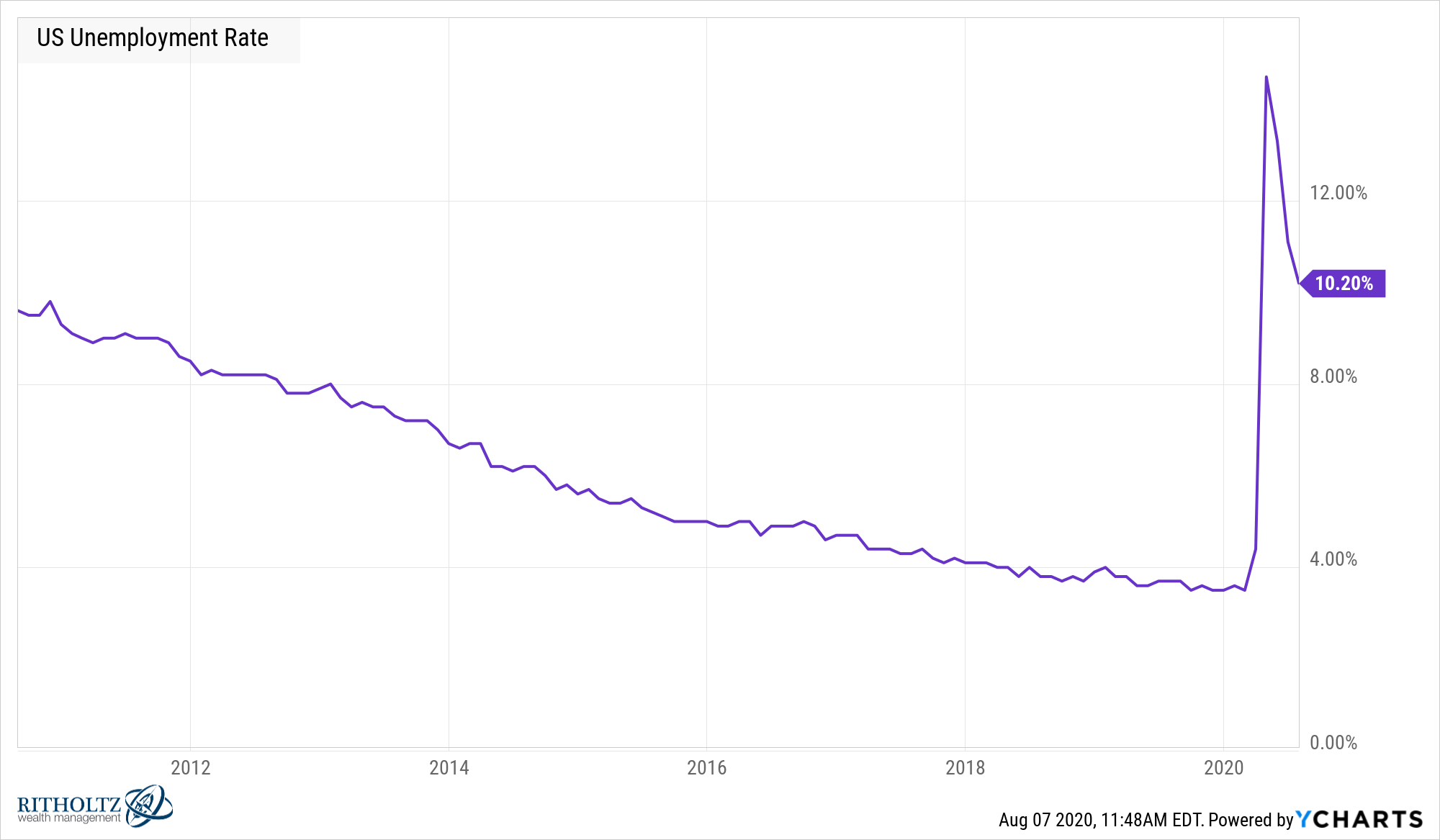 When you stop to think about everything we’ve thrown at the economy in 2020, it’s amazing that it’s been able to continue functioning as well as it has.

This whole year has basically been an economic experiment and so many of the outcomes have been counterintuitive to what most people expect from an economic downturn that borders on a depression.

This week the New York Fed released their quarterly data on household debt. The second quarter of the year actually saw household debt fall, which is the first time that’s happened since 2014. 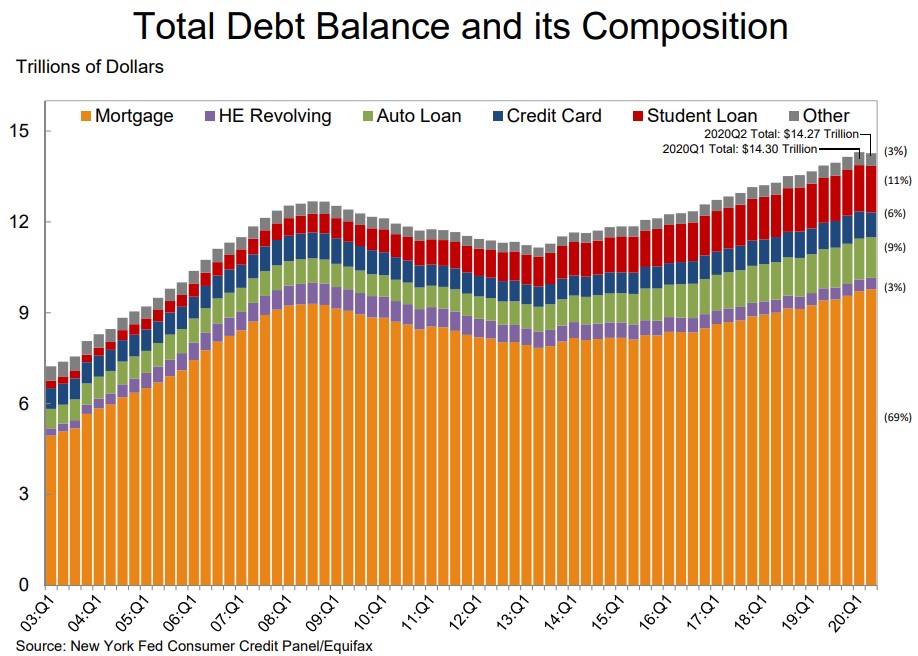 Granted, that’s still a lot of debt but the fact that consumers were able to repair their balance sheets in the midst of double-digit unemployment rates and the worst quarterly GDP print since the Great Depression would have been unfathomable in prior recessions.

Now look at the delinquency status of household debt: 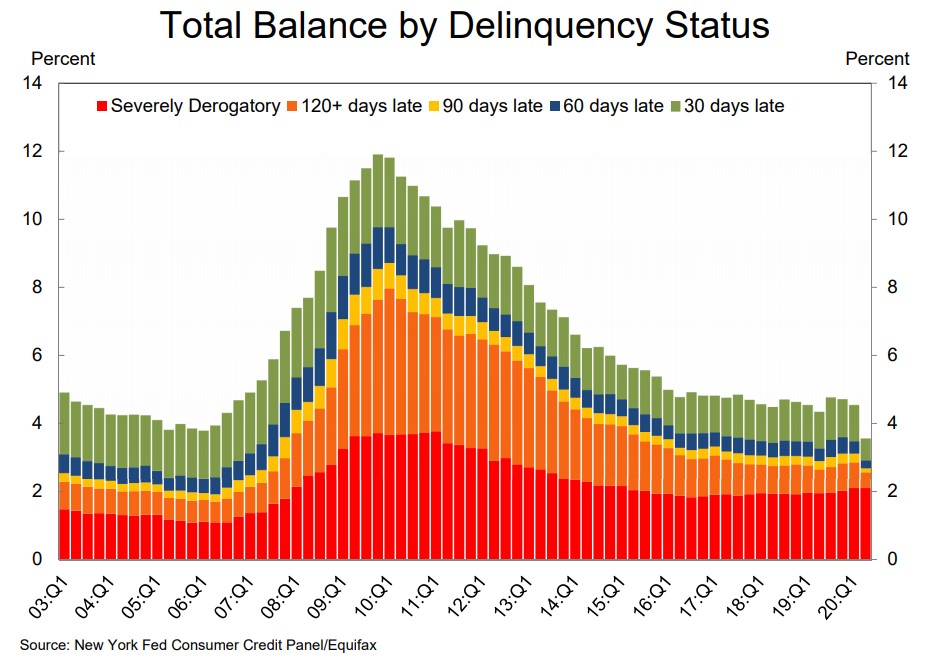 Now check out what’s been happening to credit card debt (via the WSJ): 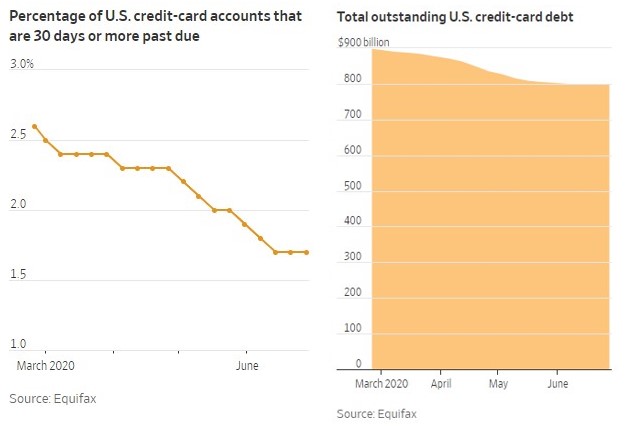 Outstanding credit card debt fell from March to June as did the percentage of credit card bills that were past due. No one could have predicted this would happen during one of the worst economic contractions ever.

Or how about the personal savings rate which briefly shot up to well over 30% and remains exceedingly high: 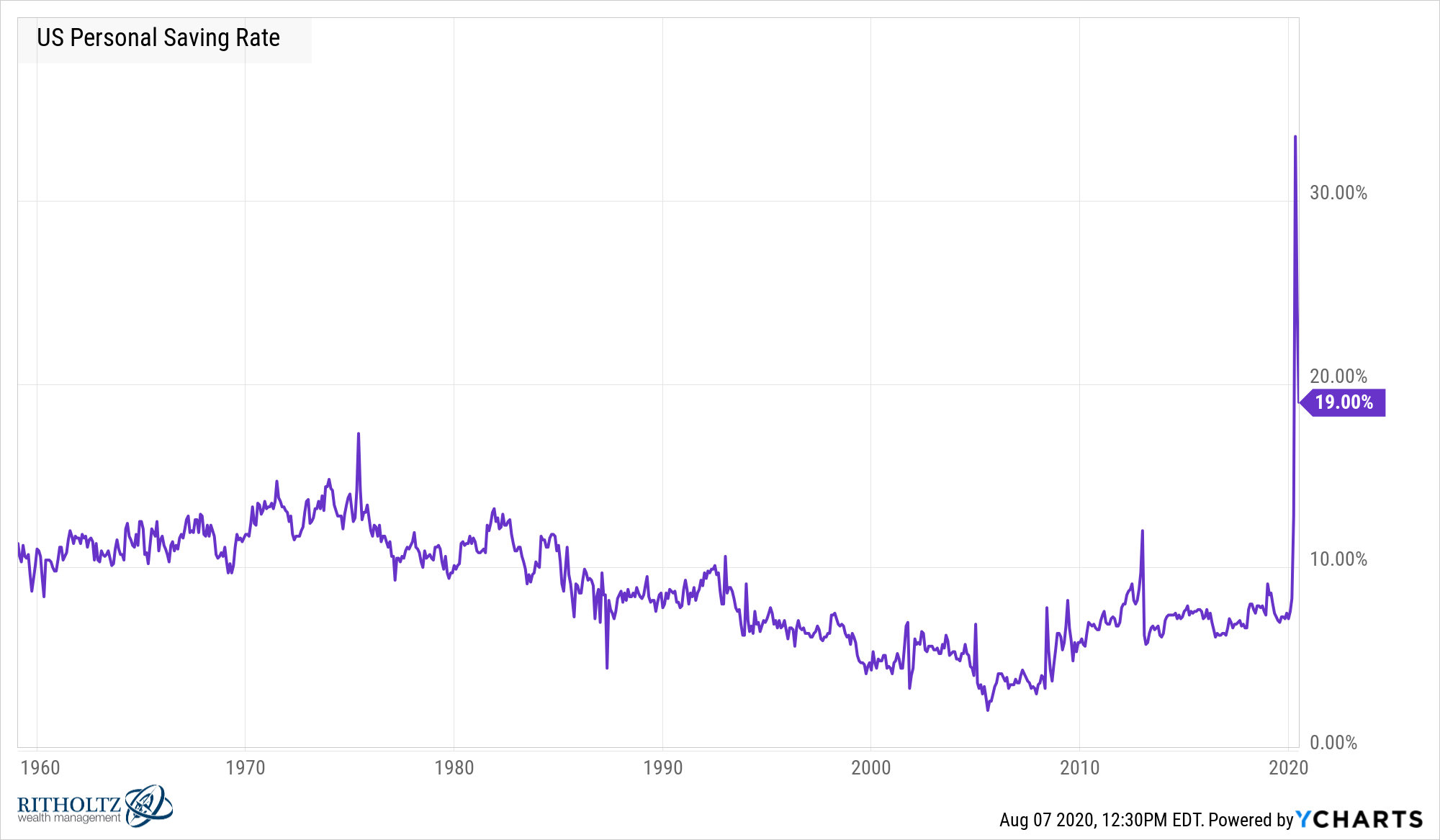 The real estate market has been red hot after an initial slowdown during quarantine: 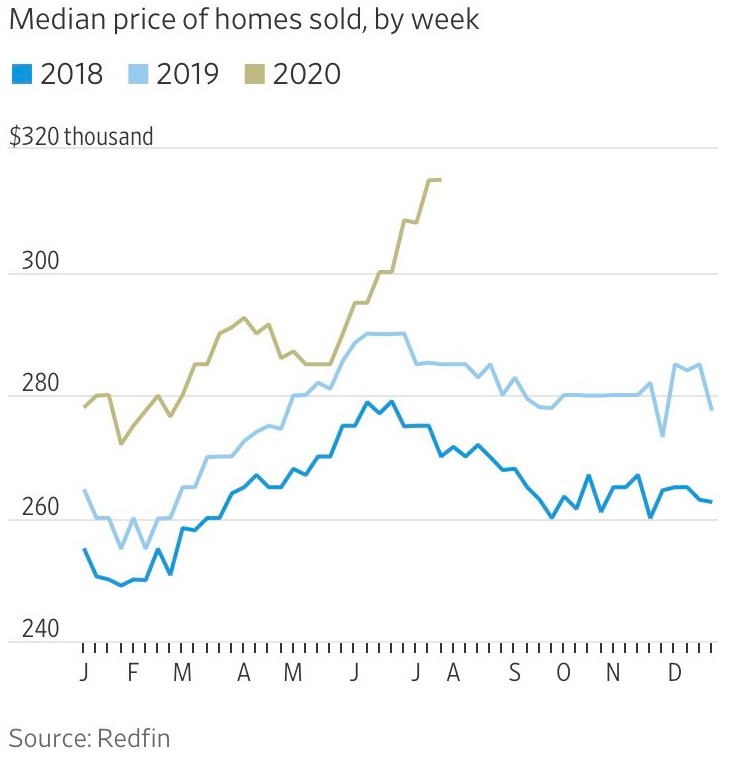 I’ve spilled plenty of ink on the increase in speculation in the stock market over the past few months but it’s another completely unexpected reaction to a pandemic-induced recession. Here’s a quick summary from CNBC:

TD Ameritrade said Tuesday it added a record 661,000 new funded retail accounts in the second quarter, surpassing the 608,000 new accounts during the first quarter. The broker, which is set to be acquired by Charles Schwab, also reported a record 3.4 million daily average revenue trades — more than four times last year’s levels and 62% more than the prior quarter.

The major online brokers — Charles Schwab, TD Ameritrade, E-Trade, Interactive Brokers and Robinhood — have seen new accounts and trading activity surge this year during the coronavirus recession. The brokerage industry experienced a flood of new, small investors who saw the market rout and subsequent rebound as a buying opportunity.

The stock market is also just 1% from all-time highs: 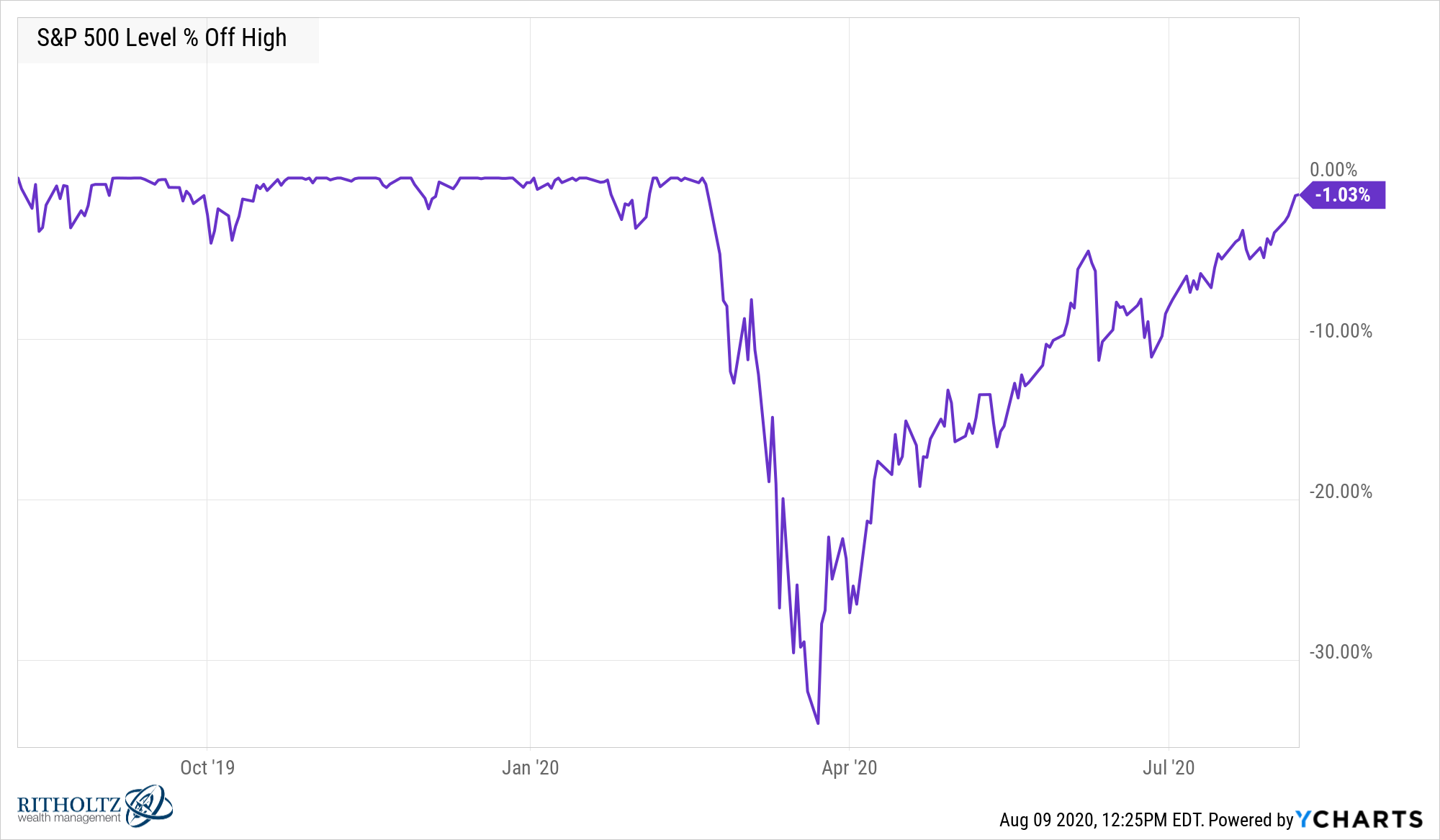 Everyone now knows why these things have happened.

The government flooded the system with money and people either spent it, saved it or invested it in the stock market. You can see the massive personal income spike in April the likes of which we’ve never seen before: 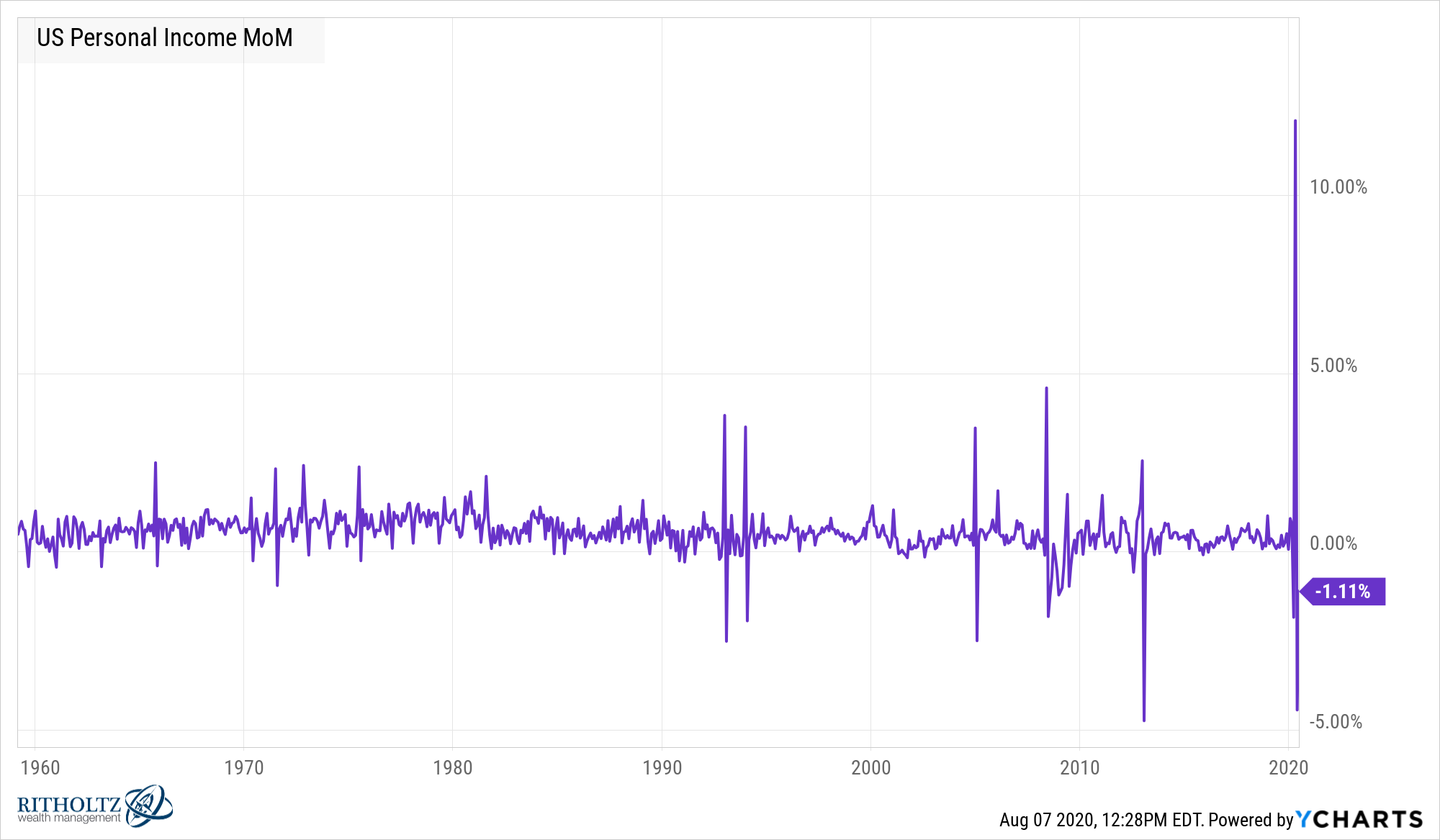 Now look at the enormous jump in wages from the increased unemployment benefits: 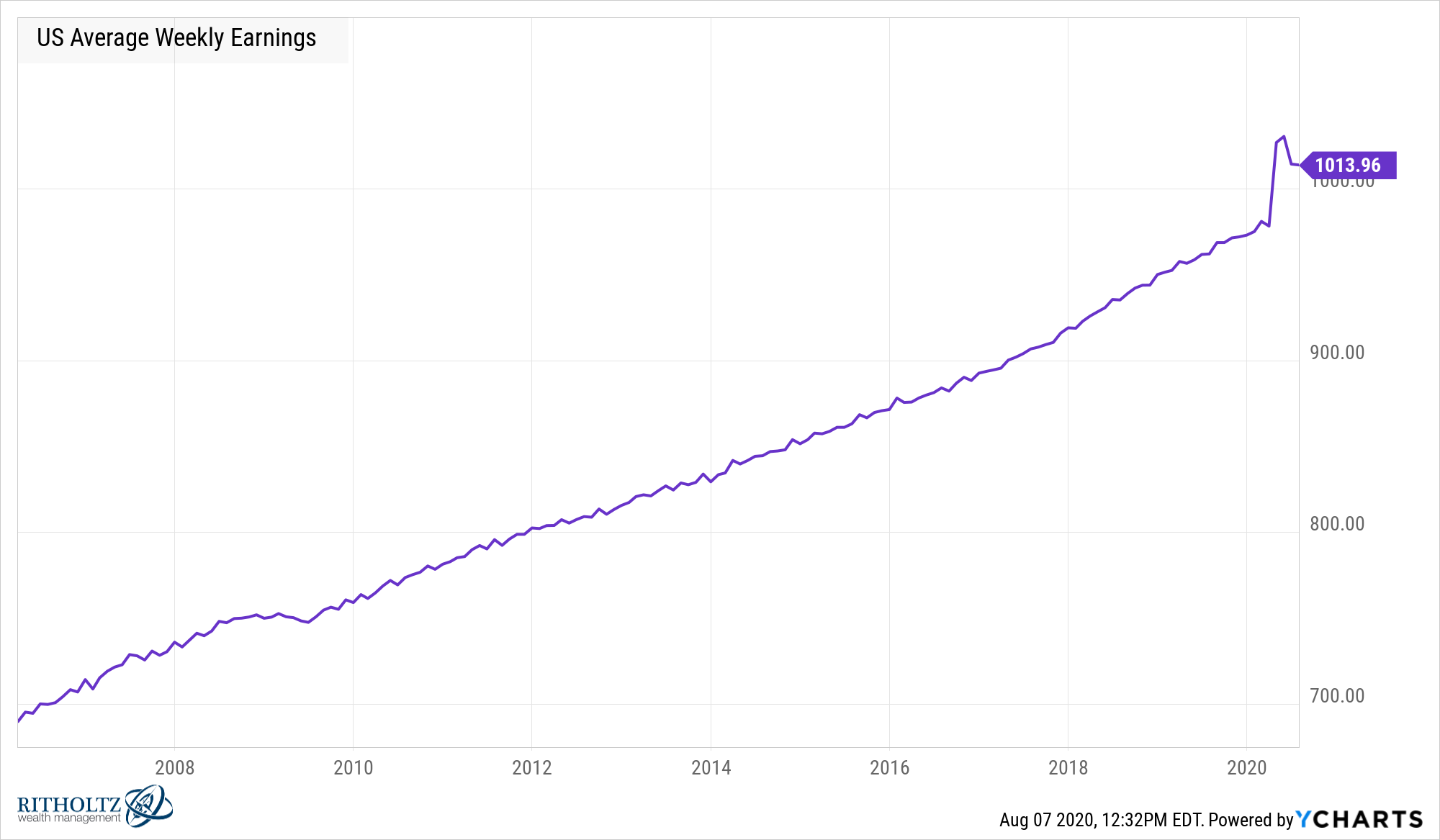 With the benefit of hindsight, it’s easy to point out why all of these things are happening. Fiscal and monetary stimulus the likes of which we’ve never seen were unleashed in record time.

But no one was predicting how well these programs would work in terms of their impact on the consumer or the fuse they lit for speculators in the stock market.

There were far more people predicting a repeat of 1929 back in March than 1999 but here we are.

And while the government response hasn’t been perfect1, the fact that the economy in many places is doing much better than anyone could have imagined 4-5 months ago could have far-reaching implications for policy going forward.

It’s possible all of this government spending is a one-off because of the nature of this downturn. This was the first recession in history where everyone knew the exact moment it began. The telegraphed nature and shutdowns forced government officials into action.

But it’s hard to believe voters won’t push for politicians to enact further fiscal rescue packages in the future. If the government can stop a depression in its tracks, why wouldn’t they do so during future recessions?2

No one knows the unintended consequences of these types of policies moving forward but it sure feels like 2020 is going to mark a turning point in the way we look at the response to economic crises in the future.

And regardless of the policy implications, this will go down as the strangest recession ever.

1Perfect was the enemy of good at the time. Speed was more important.

2Obviously, things are still messed up in many segments of the economy and we’re nowhere near out of the woods just yet. There are still millions of people who are unemployed and uncertain about their future. I’m merely marveling at the fact that this is unlike ay recession we’ve ever seen and things could be much, much worse than they are.