A number of years ago I was packing up my bags on a Sunday morning to fly out to an investment conference when my wife told me we had a plumbing situation.

Water was coming up out of the drain in the shower. And the kitchen sink was backed up.

She was scheduling a plumber to come to the house as I walked out the door to hop on my flight.

As my flight touched down I called to see what the verdict was. The news was weirder than I expected.

So what’s the damage? I asked.

Well it’s not great she told me. When the plumber put his snake video device into the pipe that runs from the kitchen sink to our master bathroom he discovered it was full of eggshells.

What?! There’s something living in the pipe?!

No, Ben — eggshells from your morning breakfast.

You see I’m a creature of habit. Every morning for breakfast I have scrambled eggs. And when I first started making eggs I would discard the shells into the garbage disposal. I probably did this hundreds of times.

The problem was the grade of the pipe was off just a smidge so those eggs weren’t finding their way out of the house but instead sat on the bottom of the pipe and built up over the course of a couple of years.

After flushing the pipe with many blasts of water to clear things up the plumber gave us some advice: Never put any food down your garbage disposal. Garbage disposals are what keeps me employed.

He said the garbage disposal gives people a false sense of security that they can just put anything down their sink and it will magically disappear. Much to my surprise, garbage disposals are not as trustworthy as I thought.

There are plenty of examples like this where safety measures can offer a false sense of security, thus introducing additional risks to the equation.

A study in Norway found new cars, despite having better safety measures and more advanced technology, get into more crashes than old cars. And this takes into account the fact that there are more new cars on the road. The probability of damage and injury is higher when driving a new car because people feel safer driving them and also use them more often.

Safety measures in the world of finance are sure to have unintended consequences as well.

The financial models many banks used gave them a false sense of security leading up to the Great Financial Crisis. Garbage-in, garbage out is the same for financial models as it is for your sink.

The measures enacted during the current crisis, as necessary as they may have been, are sure to change the way investors view risk in the years ahead.

I keep coming back to this chart of corporate bond performance this year: 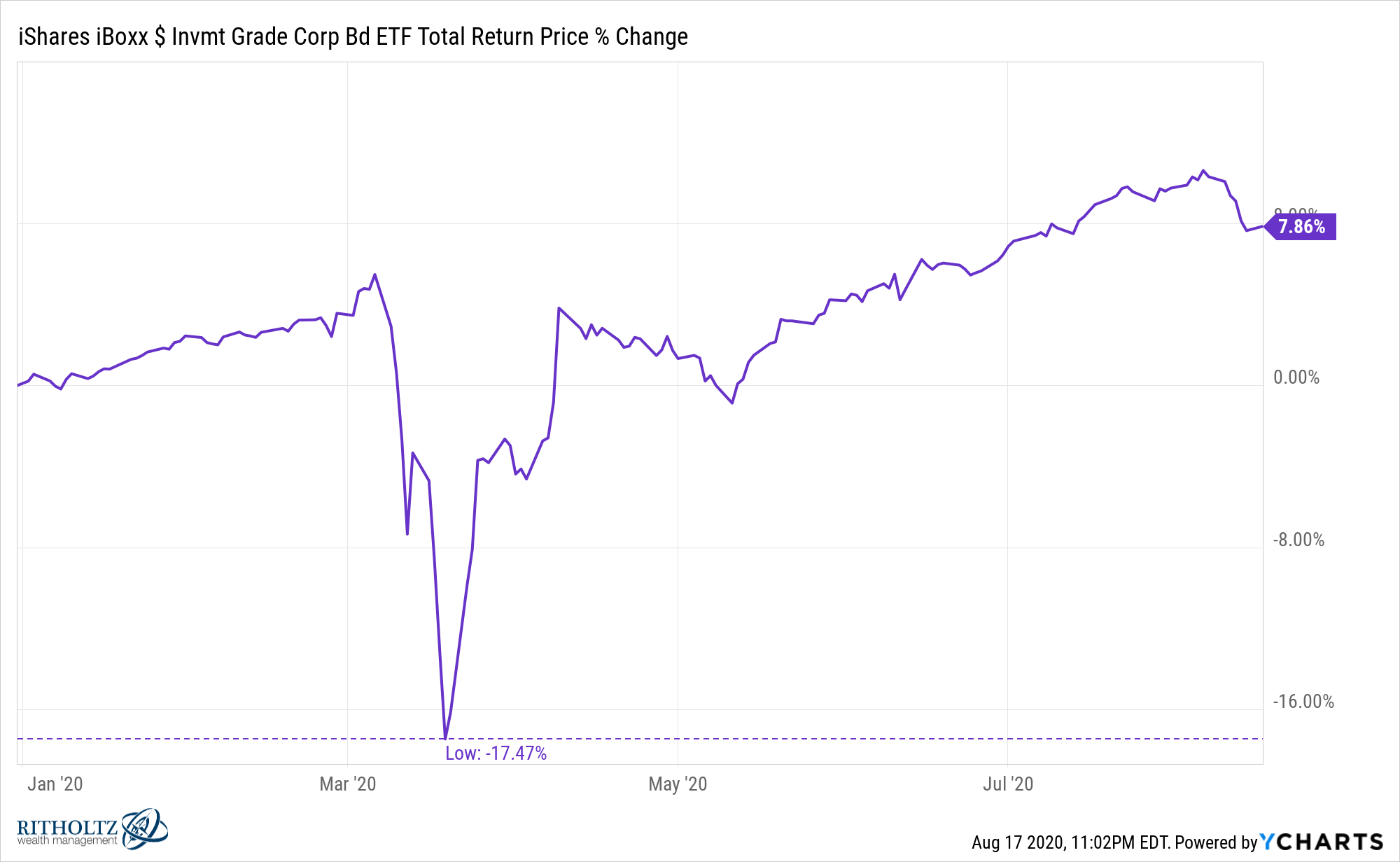 From peak-to-trough, the corporate bond ETF (LQD) fell nearly 22% in March alone. Even during the Great Recession, which was much more of a credit shock, it only fell 17%.

This year has been an event-driven crisis. We all know why these bonds sold off. And if you’ve been following along, you know why they have come back so strongly — the Fed.

The Fed back-stopped the credit markets both financially and psychologically to keep the system functioning and I have to imagine it’s gone better than they possibly could have imagined. The markets are doing much better than the economy through this crisis and the Fed is a huge reason why.

Many people are angry at the Fed for doing this. Others feel it was absolutely necessary considering this isn’t something anyone could have planned for.

I’m not here to pass judgment. The Fed is part of the markets and you have to invest accordingly, no matter how you feel about their actions.

These market-saving measures are sure to have unintended consequences going forward. I don’t know exactly what those consequences will be but I can pose some questions to think through potential ramifications:

The great thing about risk management is it can help protect you from the worst-case outcomes. But that reduction in risk often comes with a cost by enhancing other risks. For some investors, risk reduction in one area can actually lead to more risk-taking elsewhere.

Risk is like a game of whack-a-mole — hit one risk and another pops up somewhere else.