It’s time to start seriously preparing for the possibility of a recession for the first time in over a decade.

The coronavirus is slowing down businesses, wreaking havoc on the travel industry, shutting down large events, quarantining large groups of people, closing down schools, testing our healthcare capabilities, and leading to a level of fear we haven’t seen in some time. The global economy is taking hits from all sides at the moment.

I may be getting ahead of myself here but it’s worth preparing for an economic slowdown because it looks like the coronavirus is going to be with us for a number of months at a minimum.

Stock market corrections can happen for any number of reasons but recessionary periods typically produce some of the worst market crashes in history. The Great Depression, the 1937 recession, 1973-75 recession and the Great Recession all caused the markets to be cut in half or worse.

But not every recession leads to a complete disaster in the stock market. There have been a number of times throughout history where the United States went into a recession but not a debilitating market crash.

After looking through the numbers there are basically 3 tiers of market downturns that correspond to a recession. The first tier are those recessions with the worst corresponding market crashes over the past 100 years or so:

These are the most well-known crashes other than the 1987 crash (which somehow didn’t have anything to do with an economic slowdown). The average plunge in these 5 instances was -59% (which is skewed heavily by the Great Depression). The only one that really had nothing to do with a severe economic downturn was the early-2000s. That was more about an unwind of speculation due to the dot-com bubble.

The next recessionary market correction is the more run-of-the-mill bear markets:

The average retreat in the stock market during these periods was a loss of 27%. None of these recessions or corrections were all that memorable in terms of market history although the 1969-1970 crash that led to the end of the go-go years is worse than many realize. Finally, here are the corrections that correspond with a recession that never even made it to the technical -20% definition of a bear market:

The average decline in these 4 periods was just 16%. The 1990 recession was worse than people remember while the 1945 post-WWII downturn had more to do with a huge jump in inflation from wartime spending. 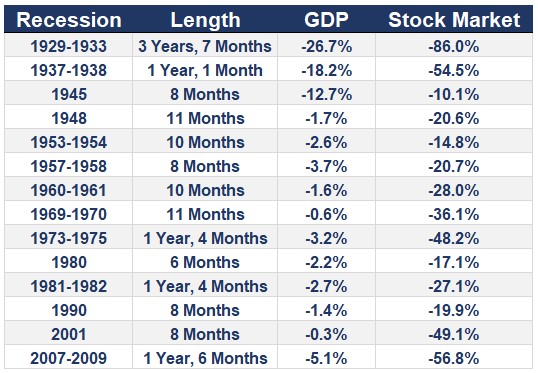 Recessions aren’t great for the stock market which is an obvious statement but they don’t always signal the end of the world either.

It doesn’t matter if we hit the NBER definition of a recession in the coming months because stocks are already pricing in that scenario.

Right now I’m sure the only thing most investors care about is how much worse things could get from here. That’s an impossible question to answer because not only do we have no clue about how the upcoming months will shake out, no one can possibly guess how investors and the public at large will react to the pandemic as we learn more.

The time horizon given in all of the charts here is for the lengths of the recessions only, not the stock market downturns. The stock market declines don’t match up perfectly with the timing of the economic contractions because things are never that easy.

So tomorrow I’ll look at the length of time it took for bear markets of the past to bottom along with the number of months it took to breakeven from the bottom. It doesn’t feel like it now but there will be a light at the end of the tunnel…I just don’t know when that will be.

Further Reading:
Everything You Need to Know About Recessions