Recessionary periods are a necessary evil in a financial system such as ours to wring out the excesses in the economy. Recessions can be devastating for certain people through job loss and the failure of businesses. But even an economic downturn can have some positive implications. Here is my latest for Fortune looking at recessions from a glass is half full perspective.

Unless the GDP suddenly falls off a cliff, next month will mark the longest economic expansion U.S. history, surpassing the period from March 1991 to March 2001.

Expansions don’t die of old age but eventually excesses will build in the system which will inevitably cause another economic contraction. No one knows when exactly that will be, but economies are nothing if not cyclical.

Everyone already knows the bad stuff that can come out of a recession—the unemployment rate spikes as people lose their jobs and companies cut back, asset prices go down, people stop spending as much, and the general mood of the country goes into a funk.

These periods are never fun to live through but there is a bright side to the downside if you go into the next recession prepared, both financially and psychologically.

Of the 12 recessions since WWII, the average corresponding drawdown in the S&P 500 was close to -29%. 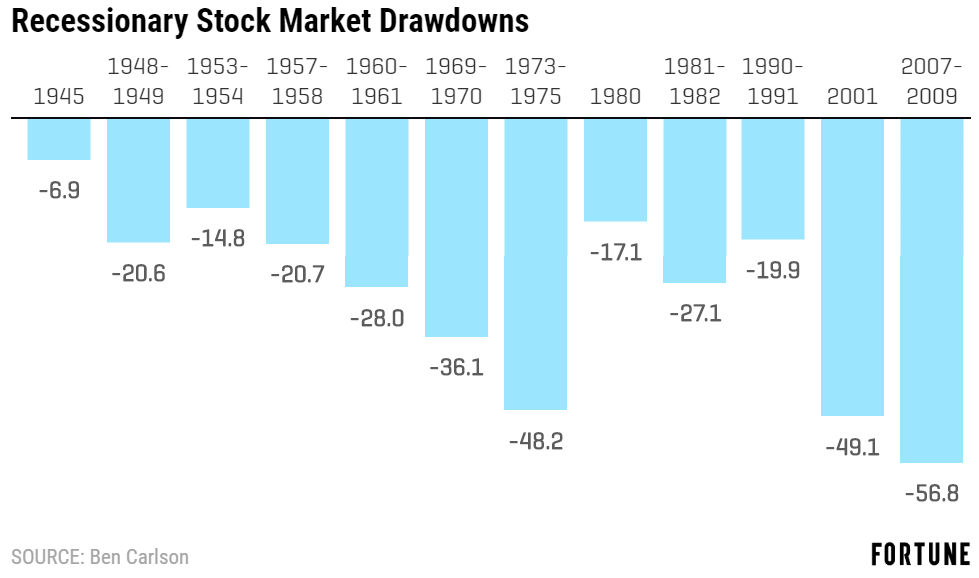 These sell-offs don’t perfectly align with the start and end dates of these recessions because things are never that clean in the markets. But when there is a recession there is a good chance stock prices will fall.

The only recession that didn’t see at least a double-digit downturn was in the short recessionary period following the end of WWII. Two-thirds of the time, stocks have been dinged 20% or worse.

This may not feel great for those who already have large portfolios. But for those who are still in the accumulation phase of their investor lifecycle, recessions and bear markets provide a lower entry point, at higher dividend yields. For example, when the market peaked in late-2007, the S&P 500 dividend yield was roughly 1.7%. That shot up to 4% by the time the selling subsided in early-2009, offering investors not only a half-off sale on the price of the market but a more than doubling of the dividend yield.. This is especially true for young people, who should get down on their knees and pray for bear markets while they slowly deploy capital into the markets.

While dividend yields on stocks tend to rise during an economic contraction, interest rates tend to fall as economic growth slows, the Fed lowers short-term rates, and bond prices rise. 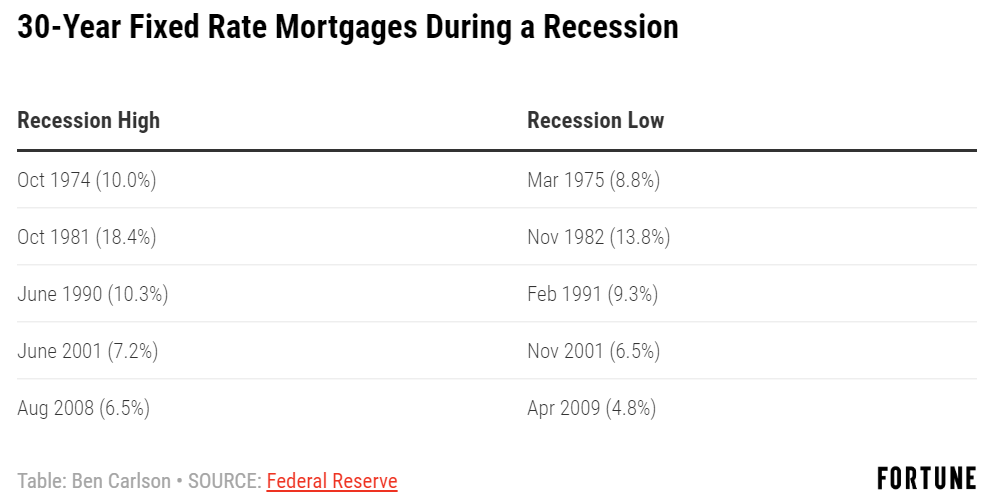 Over the past five recessions, mortgage rates have fallen an average of 1.8 percentage points from the peak seen during the recession to the trough. And in many cases, they continued to fall after the fact as it takes some time to turn things around even when the recession is technically over.

Mortgage rates don’t have nearly as far to fall as they did in the past since the starting point is so much lower today. But even a little weakness in economic activity can send rates plunging.

After hitting 5% or so in November 2018, the 30 year fixed rate mortgage has fallen to around 3.8% with a minor softening of the economy.

For those who can take advantage, a recession could be a nice time to buy through a combination of lower housing prices and lower borrowing costs.

Recessions are also a reminder that hardship can provide new opportunities.

IBM was founded following a brutal three-plus year panic in the late-1800s. UPS was founded in the same year JP Morgan single-handedly saved the banking system during the panic of 1907. General Motors came just a year later. Walt Disney opened up shop for his movie company during a recession in the 1920s. Fortune Magazine was created just 90 days after the market crash of 1929.

The first Charles Schwab branch opened just after the nasty recession of 1973-1974, the very same year a guy by the name of Bill Gates started a little company called Microsoft. Airbnb was started at the depths of the crisis in 2008.

Entrepreneurs and business leaders often need to get creative when euphoria turns into fear and this can create some wonderful business ideas.

This too, shall pass

Since World War II, the average recession has lasted just 11 months, with the longest downturn being the Great Recession which was 18 months in duration. 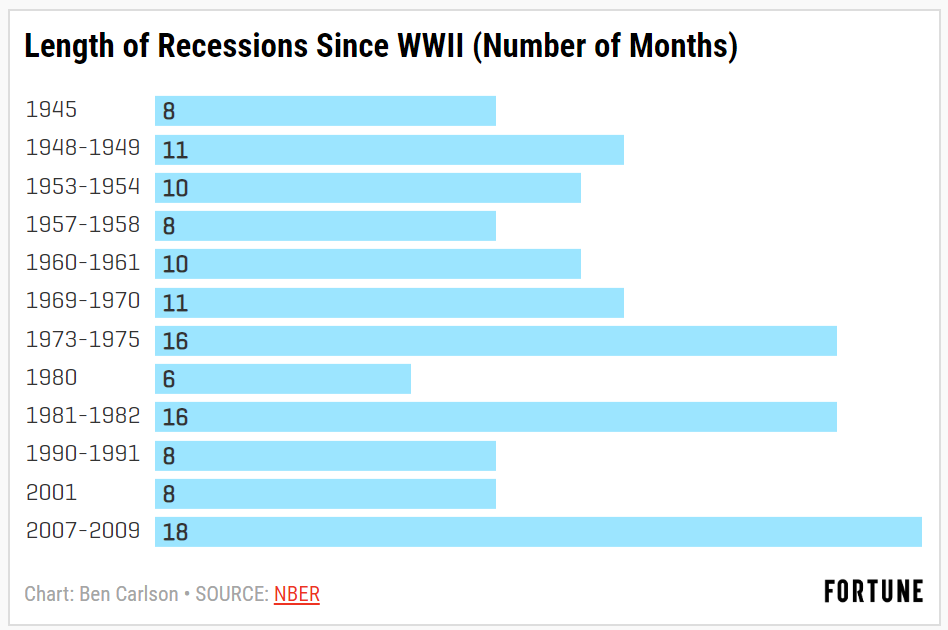 The effects of a recession can linger long after they’re over, but the expansions far outweigh the contractions in terms of both magnitude and length.

The caveat in all of this is you must be prepared for a recession before it actually happens. It’s impossible to take advantage of lower asset prices, declining mortgage rates, and entrepreneurial opportunities if you don’t have your finances in order ahead of time.

That means ensuring you have a rainy-day fund set aside to see you through tough times. You need a portfolio that’s diversified enough to allow you to hang on when the stock market is getting annihilated and gives you enough dry powder to rebalance into the pain.

Your credit score must be good enough to give you access to borrowed funds when rates are falling. And your savings rate needs to be high enough to give yourself a margin of safety to put funds to use when everyone else is struggling.

Whenever the next recession hits, just remember, this too, shall pass.