1. Is it becoming a contrarian position to be optimistic about the future? I’m getting a little sick of the “  2018 is the worst year ever.” Our society is far from perfect and things could always be better but if you honestly think humanity has reached a low point do yourself a favor and read a history book. Things have always been mostly terrible, it’s just now people have way more time on their hands to complain about things on social media.

2. Do people sell because stocks are falling or do stocks fall because people are selling? Wealth Management has a neat slideshow of the 20 ETFs with the biggest outflows this year. Check out the homebuilders: 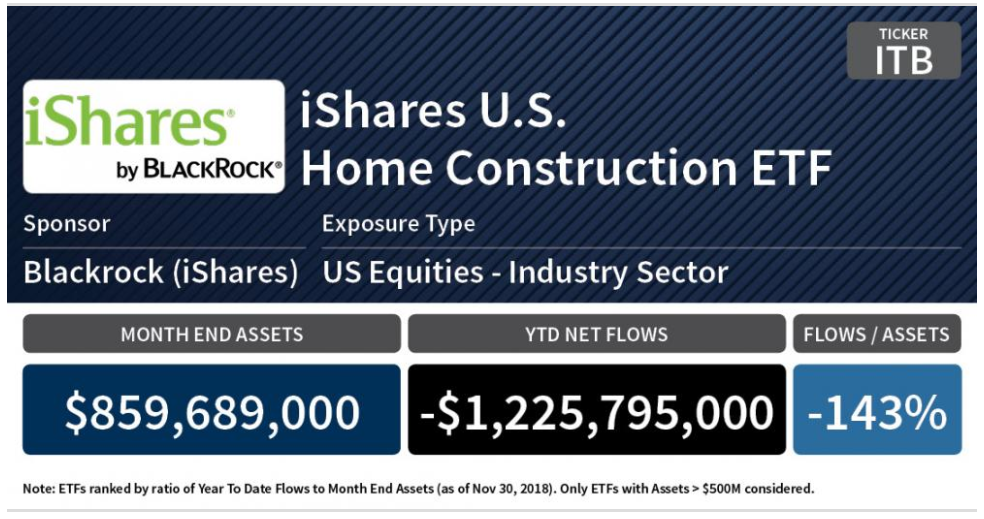 Here’s another way to look at this from my friends at YCharts: 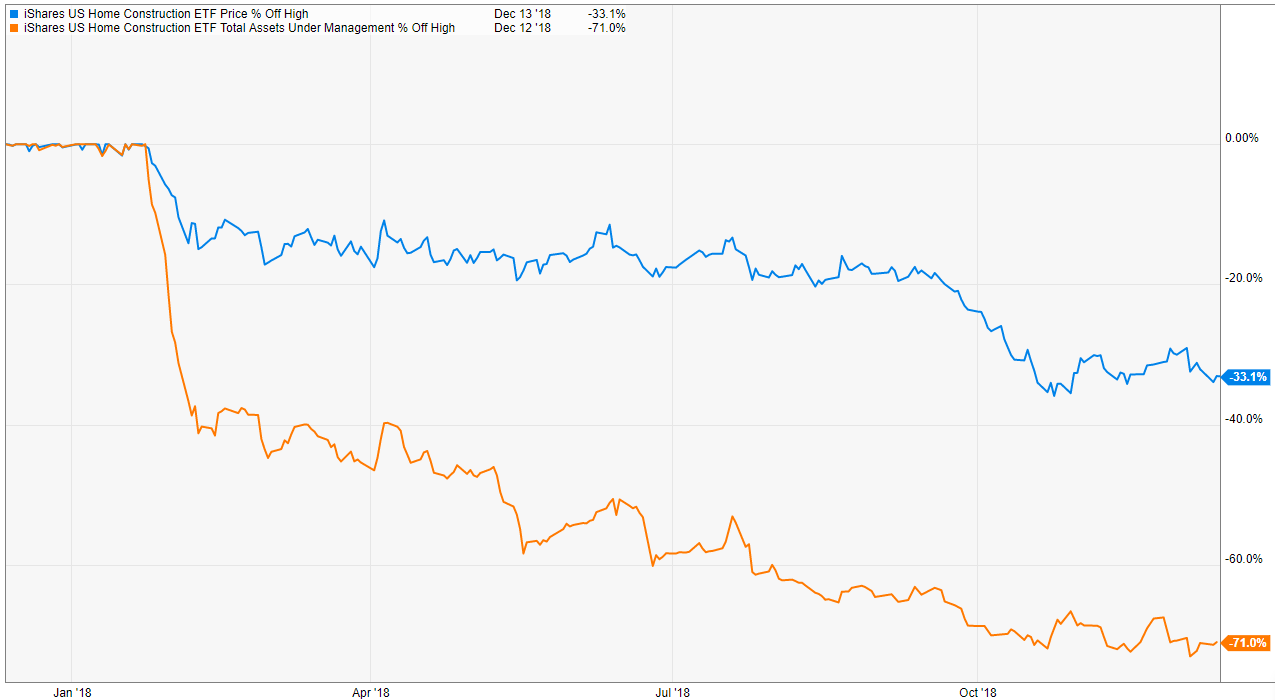 It’s amazing how quickly assets went out the door when the losses began towards the start of the year. Some of the decline in AUM can be explained by the drop in market value but look at how much bigger the losses are in assets versus the ETF itself. Investors have exited stage left in a big way.

This may be semantics but some people assume investors sell because stocks are falling but really stocks fall because investors are already selling. Eventually selling begets more selling and the losses begin to pile up but this is a perfect example of investors themselves having a huge impact on a certain segment of the market through their actions.

3. How great was the latest Jack Reacher book? By my count, Lee Child has now written 23 Reacher books. I’ve read them all. I was starting to get worried he had lost his touch a little since the last two were sort of meh. But Child came back strong with Past Tense, maybe the best fiction book I’ve read this year (it would also make for a great movie). 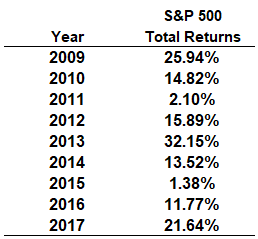 As of yesterday, it’s up roughly 1% on the year. If 2018 finishes the year in the black, that would be 10 years in a row of gains going back to 2009 (and 15 out of the last 16 going back to 2003), topping the longest streak ever from 1991 to 1999. In that time we’ve also had 5 double-digit corrections. I know professional investors like to judge themselves by the calendar but it shouldn’t really matter if this year finishes up or down.2

5. Is crypto dead or is this merely a flesh wound? I don’t have the slightest idea but this chart of rolling 12-month returns in Bitcoin is bananas: 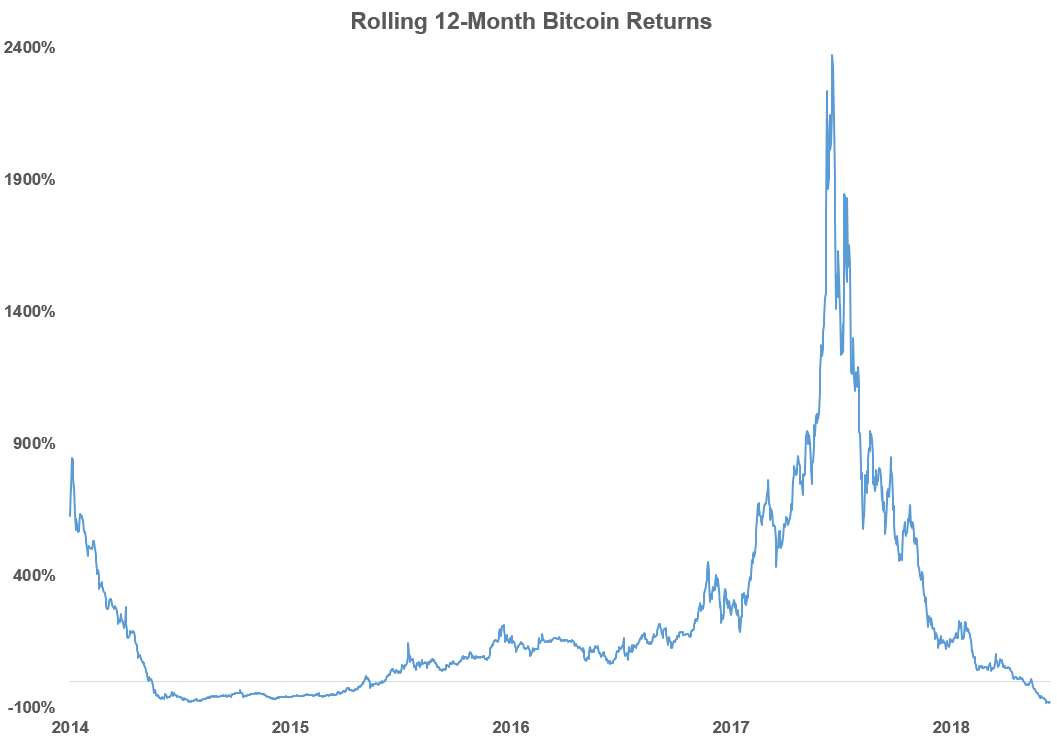 6. Is Bodyguard (Netflix) the best show of 2018? Here’s what this British show has going for it:

7. Is Robinhood going to be the bank for millennials? The “free” investing platform announced today they’re going to offer checking & savings accounts that pay 3% interest with no fees, debit cards, and access to 75k ATMs. You can get similar rates at credit unions but the tech interface seems like it would be the trump card for young people. I entered my email to gain early access to check it out and it said I was the 175,000th or so person to do so.

I still don’t know if this is a viable long-term business model but I am intrigued by what Robinhood is trying to do for young people, many of whom are anti-brand name banks.

8. How many people are trapped by debt like this couple? I read this story a few weeks ago about an anonymous married couple who are massively in debt with seemingly no way to dig out from under it. Some of the excerpts are mindblowing:

Kate: We have an insurmountable amount of debt. I’m not even exactly sure how much it is anymore. We have $60,000 in credit cards, $18,000 in a loan, and then there’s our mortgage and the second mortgage we took out, which is about $360,000 all together. And that’s not even counting our student loans. How much are those, Tom? Are you at home? Can you look it up?

Tom: Yeah, I’m at home, but I have no idea how to even look it up. The only time I go on the site is to ask them to push back when we have to start paying it. I know that’s irresponsible and horrible, but that’s really, truly what I do. I think it started at about $90,000.

Kate: Now, with interest, the law school debt is at a hundred and something. It’s either around $120,000 or $140,000, somewhere in there. We’ve almost never paid my law school loans — every year we ask them to put us in a financial hardship status so we don’t have to pay. But the interest keeps building.

Then there was this:

Kate: Frankly, what I imagine is one of us will die from stress, and the life insurance will pay things off.

Kate: Right. [Laughter.] Things have gotten really hard, but I don’t think we could even afford to get a divorce. We certainly can’t afford to live apart. I mean, it’s cheaper for us to stay married. We don’t have a divorce option. The only time I have actually considered divorce, I’ve thought, Tom is not going to let me file for bankruptcy, and I can’t live like this. So we may need to get a divorce so I can help myself. [Crying.] That’s why I left the house before this phone call, because I did not want to be at home with the kids and with him, because I just didn’t know if I could keep it together. The kids don’t know anything about this stuff.

These people made some boneheaded money decisions but it’s hard to not feel a touch of sympathy for their plight. Life is hard enough for most people as it is but I can’t imagine living with a financial disaster of Titanic proportions hanging over my head at all times.

1Yes, I’m including dividends in this calculation which made 2011 a positive year even though the price index was technically down. I’m a total returns guy.

2I guess if it was up to me I wouldn’t mind seeing a slightly down year just to get it out of the way.