As a long term investor in my late 20’s, the general advice seems to be that I should buy in this environment, because it’s cheap and in the long term will return the most. However, at the same time, we consistently talk about the fact that the majority of stocks won’t return to their highs. It seems possible then, that I could buy the wrong stocks and completely negate the returns I’m supposed to see over the long term because the stocks will never return to previous levels?

This is a wonderful question and the right one to be asking right now.

It feels like I’m beating a dead horse here but picking stocks is hard.

I am fairly confident in the assertion that a broadly diversified index fund of U.S. corporations will come back at some point. I don’t know how much further stocks have to fall or how long it will take to make your money back but some combination of innovation, profits and the human desire for improvement make it difficult to bet against corporations over the long haul.

I can’t say this with 100% certainty but I am far more certain about index fund mean reversion than I am about that of a handful of stocks chosen by individual investors.

You have better odds of picking a loser right now than a winner.

The Russell 3000, a representative index of the entire U.S. stock market has more than 2,700 companies in it. Nearly 800 of those companies or around one-tenth of the total, are down 90% or worse from their all-time highs right now. One in five stocks are down 80% or worse from record highs.

And many of those record highs didn’t come in 2021 or even 2020. Plenty of stocks topped out years ago and it’s not just little companies you’ve never heard of. 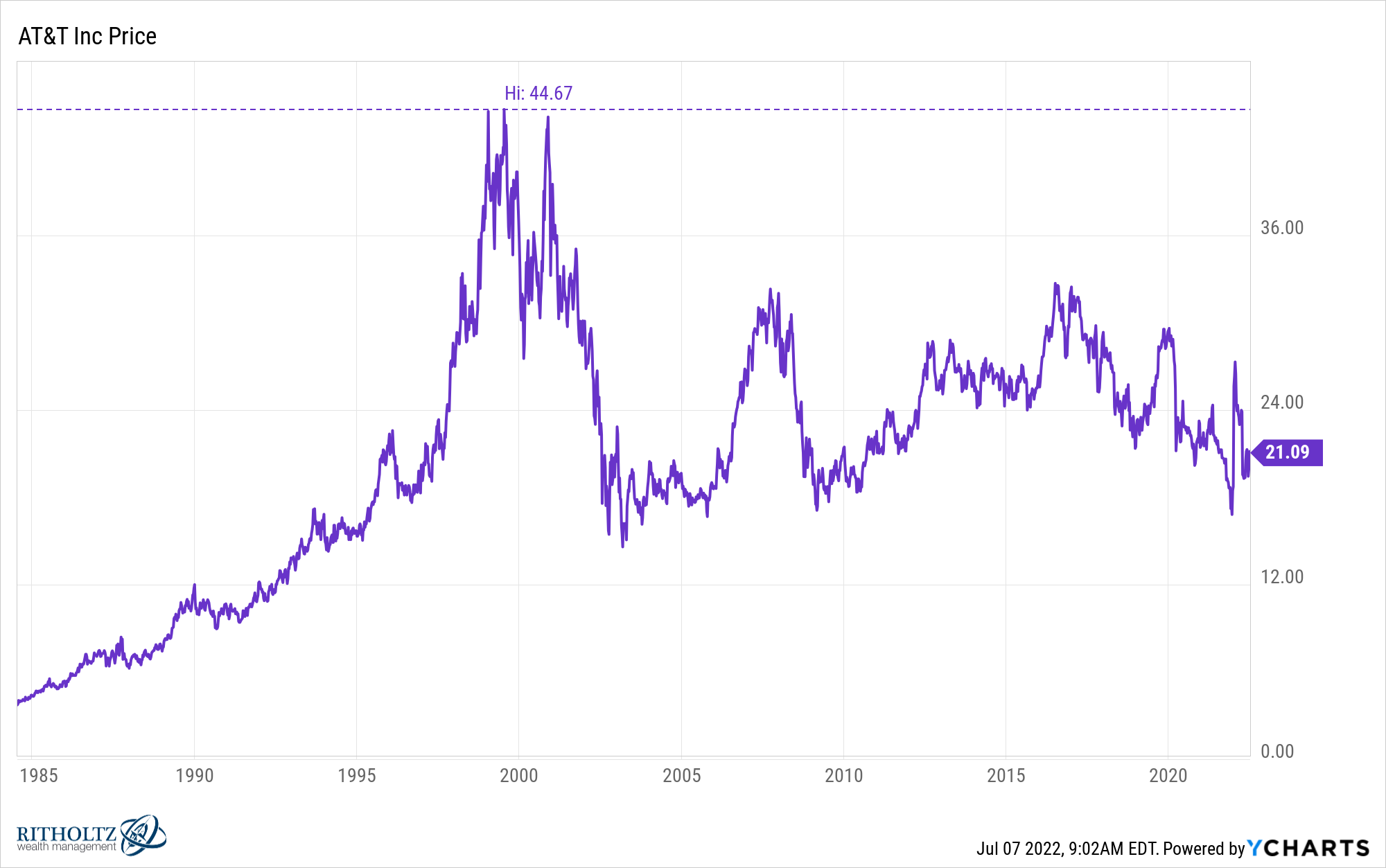 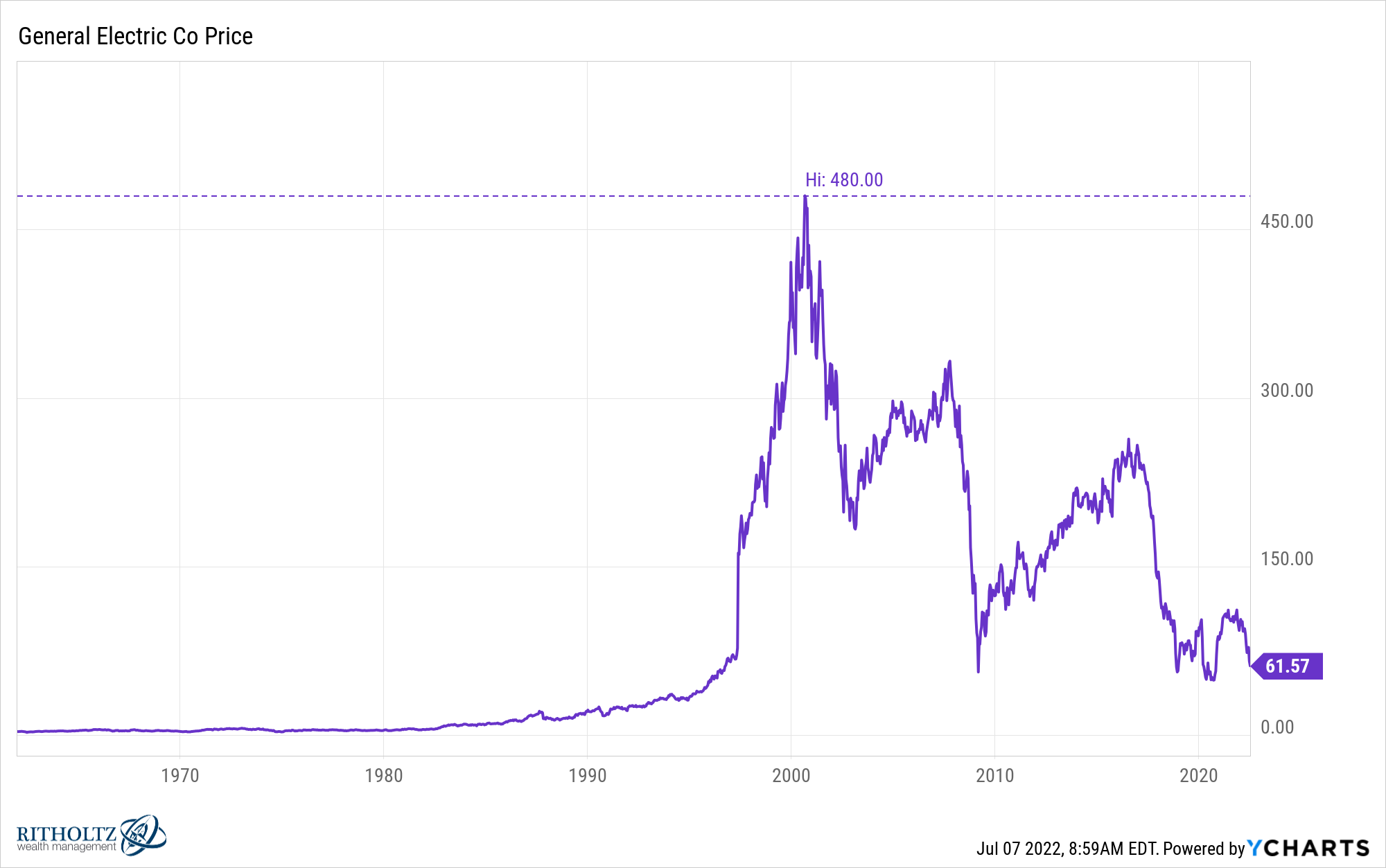 For a brief period in the late-1990s, Cisco Systems was the biggest company in the entire stock market by market capitalization. The stock price is still roughly 50% lower than those lofty dot-com bubble highs: 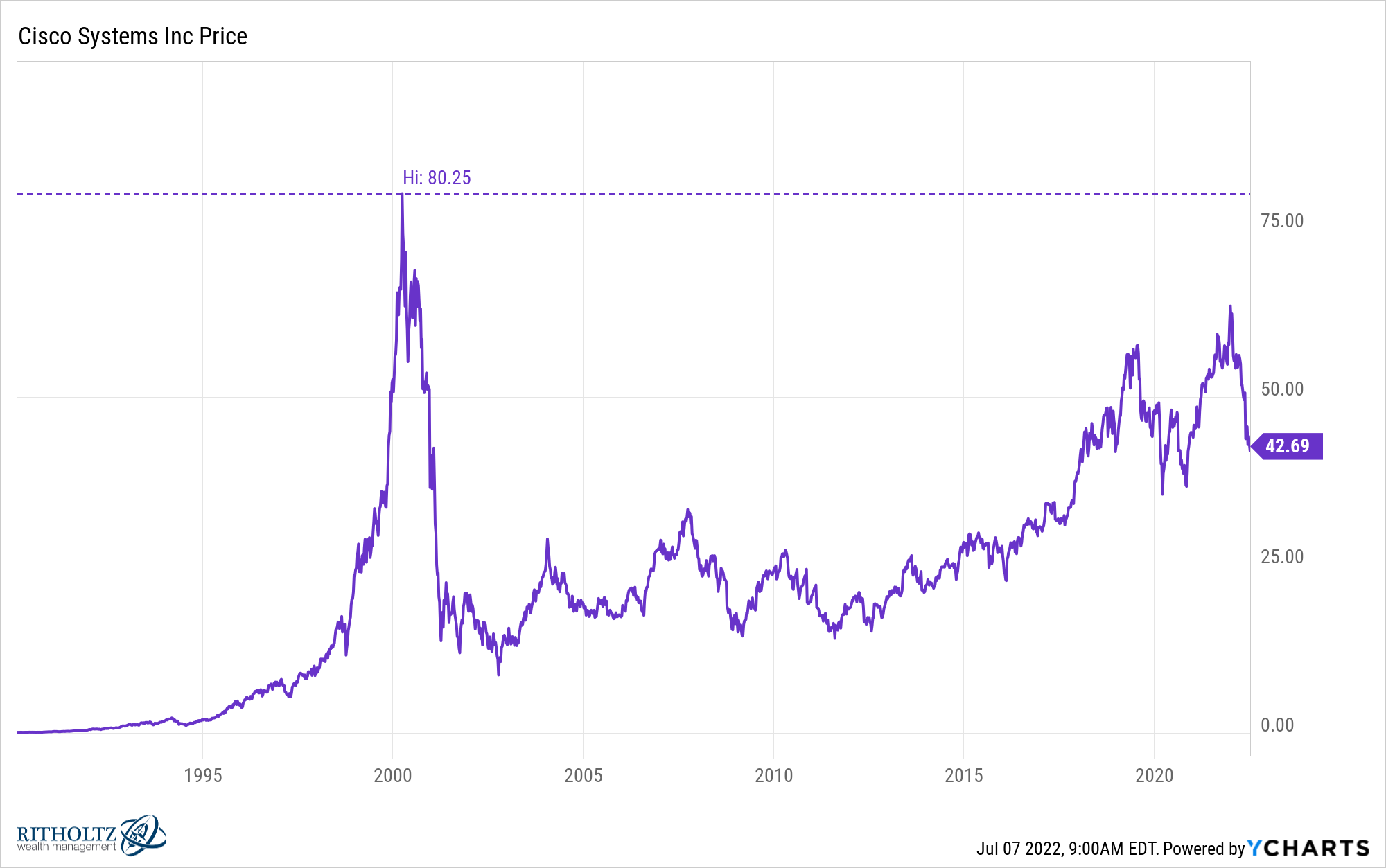 Bank of America has yet to eclipse its 2006 all-time highs: 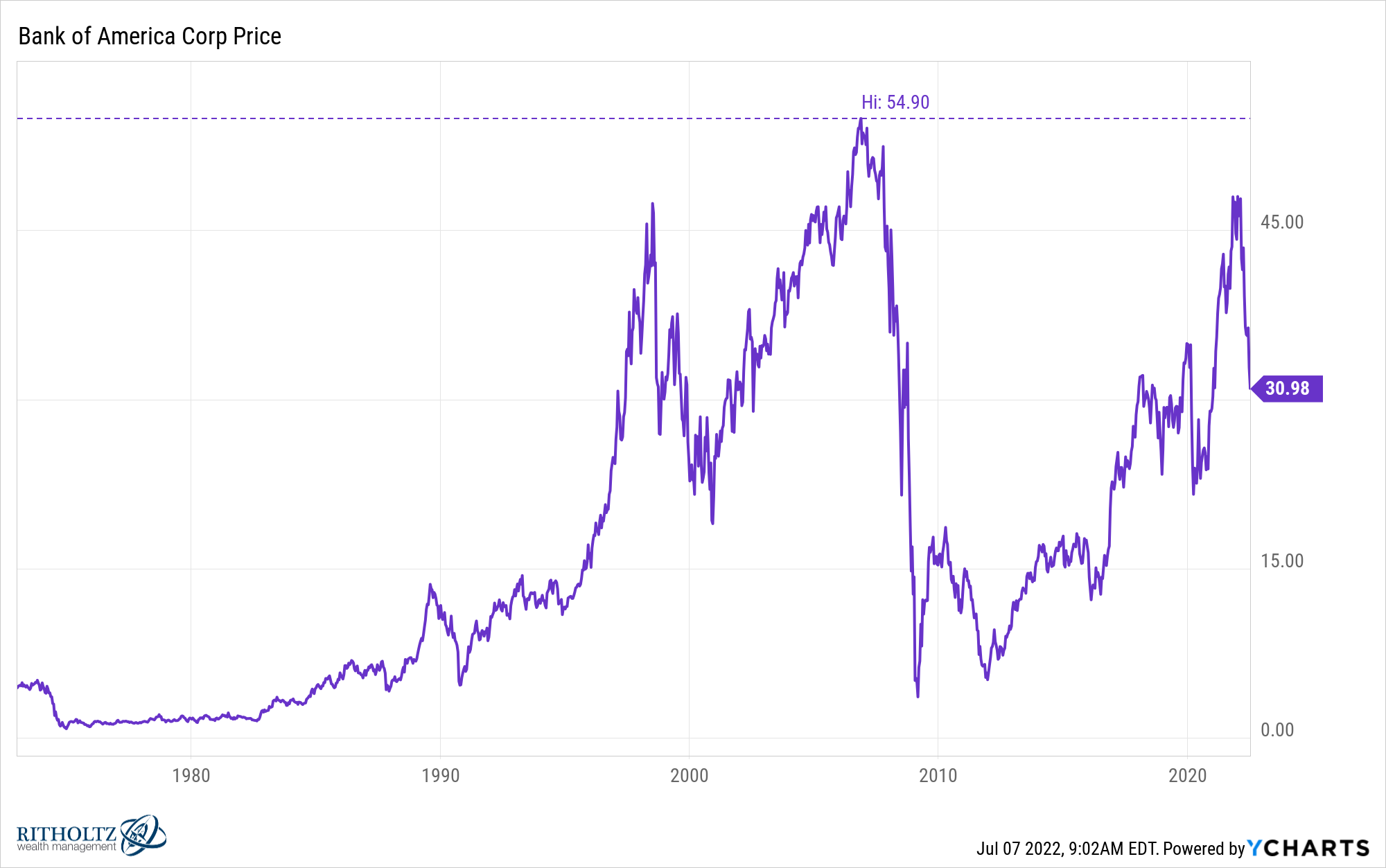 Citigroup isn’t even in the same solar system anymore: 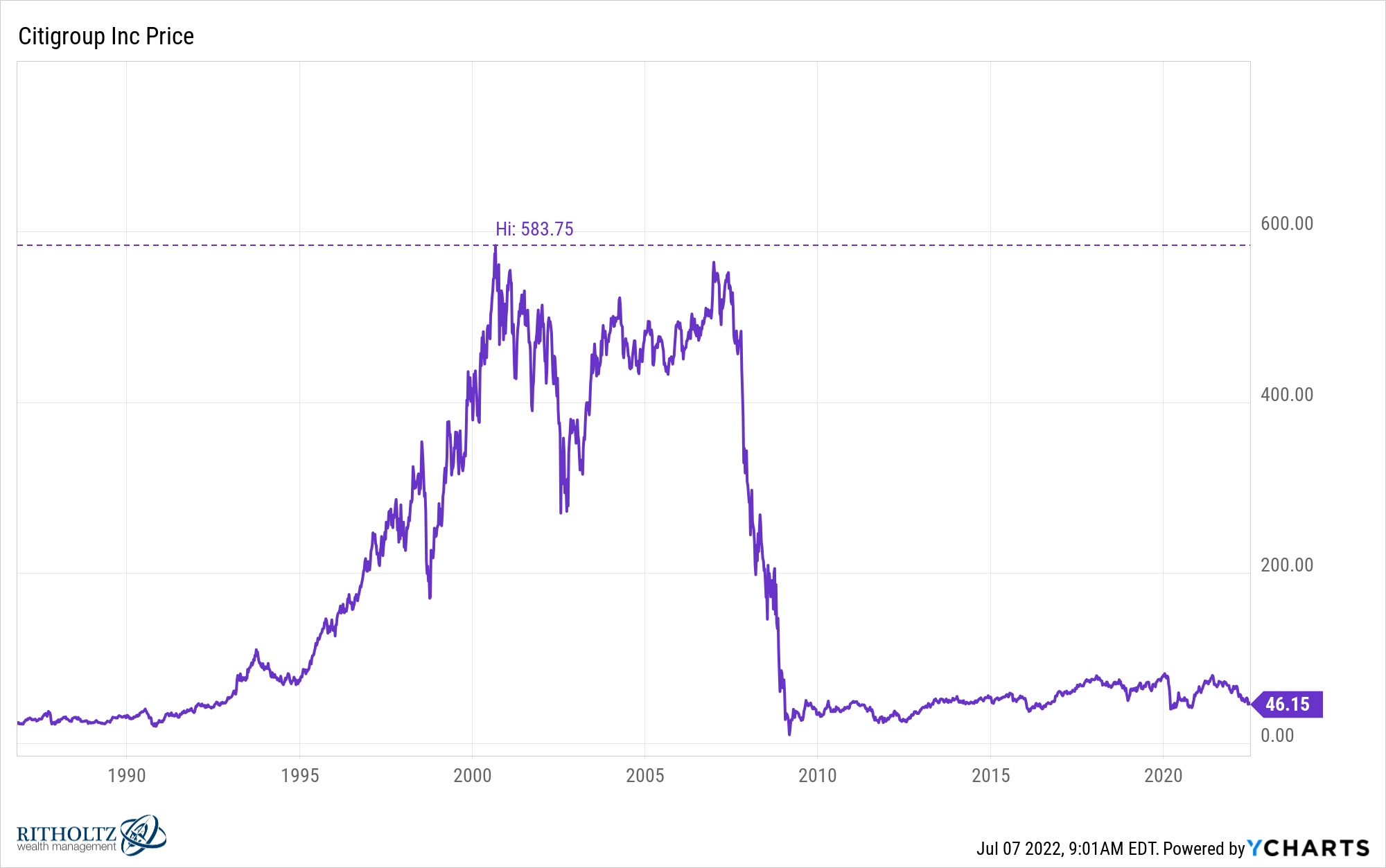 Or how about Bed, Bath and Beyond?

The stock peaked in 2013 and is now down almost 95% from those levels: 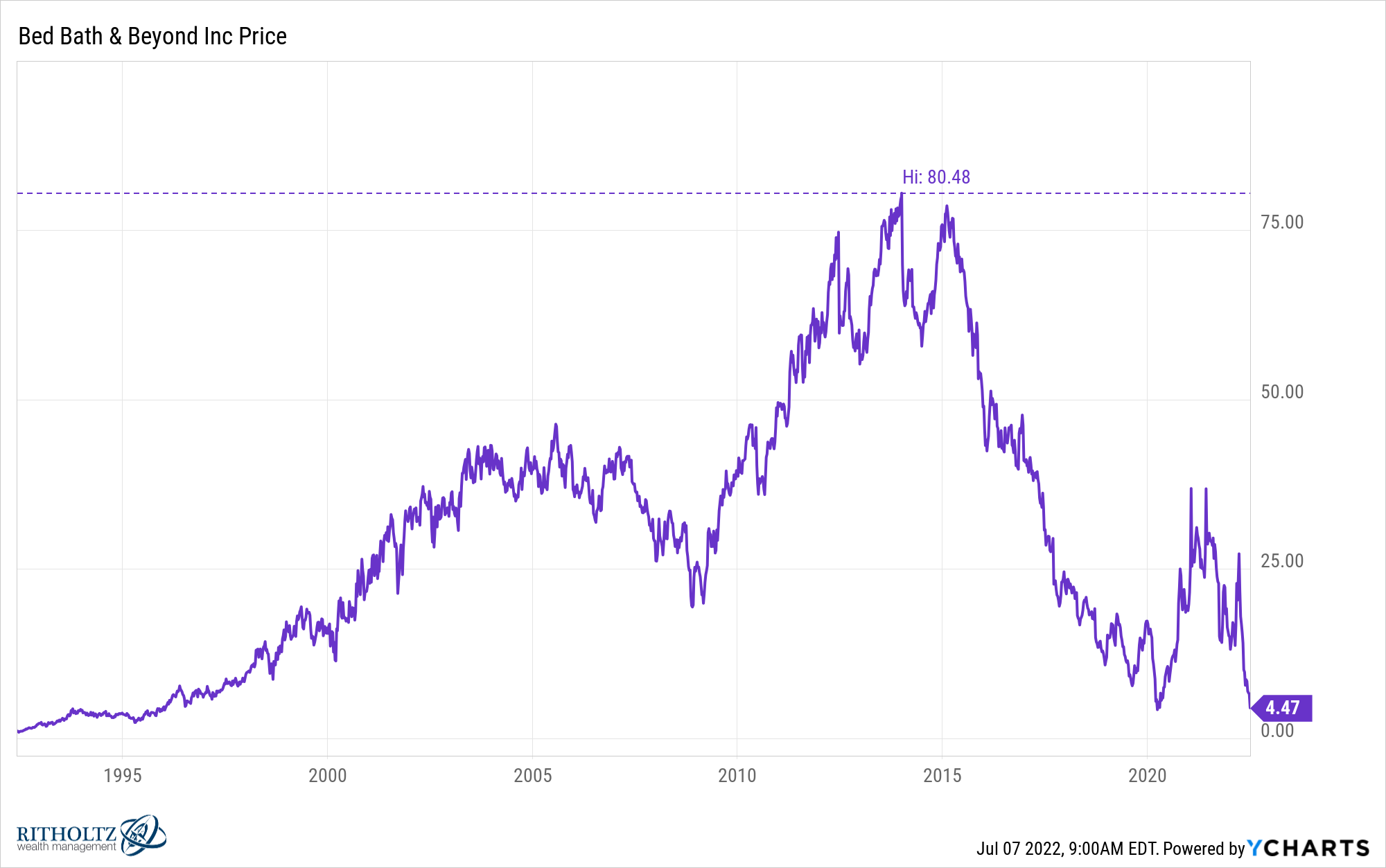 These companies are not outliers either. This is the norm over the long run.

Geoffrey West goes over this phenomenon in his book Scale:

For example, he found that in 1958 a company could expect to stay on the S&P 500 for about sixty-one years, whereas today it’s more like eighteen. Of the Fortune 500 companies in 1955, only sixty-one were still on the list in 2014. That’s only a 12 percent survival rate, the other 88 percent having gone bankrupt, merged, or fallen from the list because of underperformance. More poignant, perhaps, is that most of those on the list in 1955 are unrecognizable and completely forgotten today; how many remember Armstrong Rubber or Pacific Vegetable Oil?

And you don’t have to go all the way back to the 1950s to see massive turnover in the stock market.

Sam Ro discovered there have been 728 companies added to the S&P 500 since January 1995. In that same time, 724 names have been removed from the index.

Simply surviving in the U.S. stock market is an accomplishment over the long-term, let alone outperforming the market.

There is a counterargument here. The U.S. stock market is down around 20% from all-time highs right now.

There are many individual companies down anywhere from 40-90%. Some of those stocks are high-quality businesses. Some of them are going to look like massive buying opportunities with the benefit of hindsight.

I’ve used this one before but it bears repeating — Hendrik Bessembinder performed a study on every stock on the NYSE and Nasdaq exchanges going back to 1926.

If this doesn’t prove to you the value of broad diversification I don’t know what will.

You will never hit the cover off the ball with a diversified strategy but you will always end up on the winning team. Owning the market, by definition, means you will own the winners, even if you don’t know what they will be in advance.

But there is no guarantee of mean reversion in any one stock or even a handful of stocks.

Stocks can and will go out of business.

Index funds do not.

Bill Sweet joined me as well to chop it up about 401k loans, dealing with big losses in your portfolio, Roth conversions, targetdate funds and more.

Further Reading:
Picking the Losers is Easier Than Picking the Winners