We had Zac Prince from BlockFi on our podcast to discuss investing in bitcoin over Thanksgiving weekend.

At the time the price of bitcoin was hovering around $17,000.

It was up nearly 80% in the 2-3 months proceeding this and things were beginning to feel a tad frothy so a number of people joked our show would surely mark the top of this cycle as an indicator.

Six weeks later and the price has more than doubled, hitting $41,000 this week. 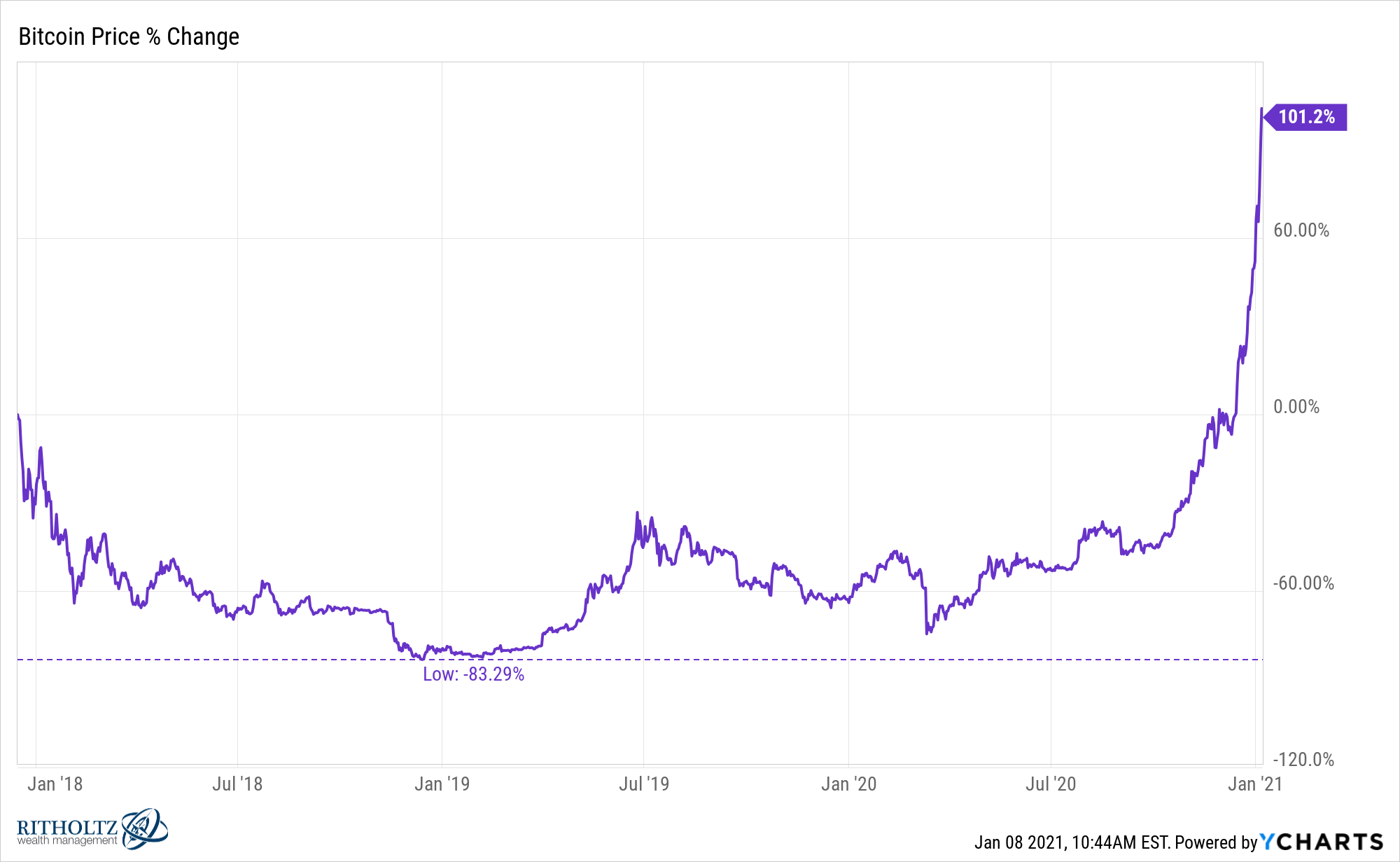 If bitcoin were to experience a similar crash as it had following the 2017 run-up in prices, it would only fall back to levels last seen in May.

Good luck guessing where this one ends.

I laugh when I hear people talk about the “fundamentals” of bitcoin. Fundamentals?

There are no fundamentals. Trust, faith, hope, technology and human nature are the only true fundamentals of cryptocurrencies.

And this is what makes it such a fun asset to track.

It’s some combination of technological innovation, narratives, potential and religion.

Bloomberg’s Joe Weisenthal laid out the best case I’ve seen for bitcoin as the first true religion of the 21st century in his newsletter:

* It has a prophet. Satoshi, who not only has never been identified but who has apparently departed the world.

* Not only is there a prophet, Satoshi was apparently in it for the benefit of all mankind. There’s no evidence that Satoshi ever sold a single coin.

* Bitcoin has a sacred text: The White Paper. A short nine-page document that still gets passed around in printed form like Gideon’s Bible.

* Bitcoin has original saints and apostles. Early figures like Hal Finney, who spoke with Satoshi, are revered in the community for their forward vision and their role in establishing the faith. Finney was the recipient of the first Bitcoin transaction.

* Bitcoin has its own Talmud-like texts. The early Bitcointalk.org message boards are still studied today, where the first users discussed the endeavor, and analyzed today in order to help guide the community.

* Holidays. Every May 22, Bitcoiners remember a famous transaction, where someone spent 10,000 Bitcoin on two pizzas. Meanwhile, every four years, Bitcoiners celebrate the halving, when the pace of new Bitcoin issuance gets cut in half. There’s other holidays too… yesterday as Proof Of Keys day, for example.

* Dietary customs. Many of the most orthodox Bitcoiners adhere to a diet of strictly eating meat.

* Schisms. Just like with any religion, there have been breakaway attempts, with disciples branching out onto their own, dividing the community, a la the creation of Bitcoin Cash in 2017.

* Disputed claims to the crown. Some people have claimed to be Satoshi Nakamoto, engendering huge controversy and anger in the community.

* Fury at apostasy. While Bitcoiners are resentful of people who aren’t part of the faith (Nocoiners) they hold in particular contempt apostates who abandon ship as part of a ragequit.

* Sayings and incantations. Just check out some Bitcoiners on Twitter, and it’s basically a stream of repetitive phrases, meant to hammer home key ideas to the flock.

But it’s unpredictable in the sense that no one ever knows how long each of these human traits will last or how far we can take them.

Bitcoin is also odd in that it becomes more enticing from a use-case perspective the higher the price goes.

Michael and I discussed bitcoin in the context of inflation on this week’s Animal Spirits video:

Subscribe to The Compound to see these videos every week.