I was having drinks last week with a group who were all in a similar situation as me — working in the wealth management field with young children at home.

The topic of saving for college came up since many of us have multiple little ones to plan for continuing education some day.

We all agreed planning for this eventuality was made exceedingly difficult by the fact that (a) the cost of college continues to skyrocket with seemingly no end in sight and (b) well I guess there is no (b) because (a) pretty much covers it.

There’s good news and bad news when it comes to saving for college.

The bad news is… 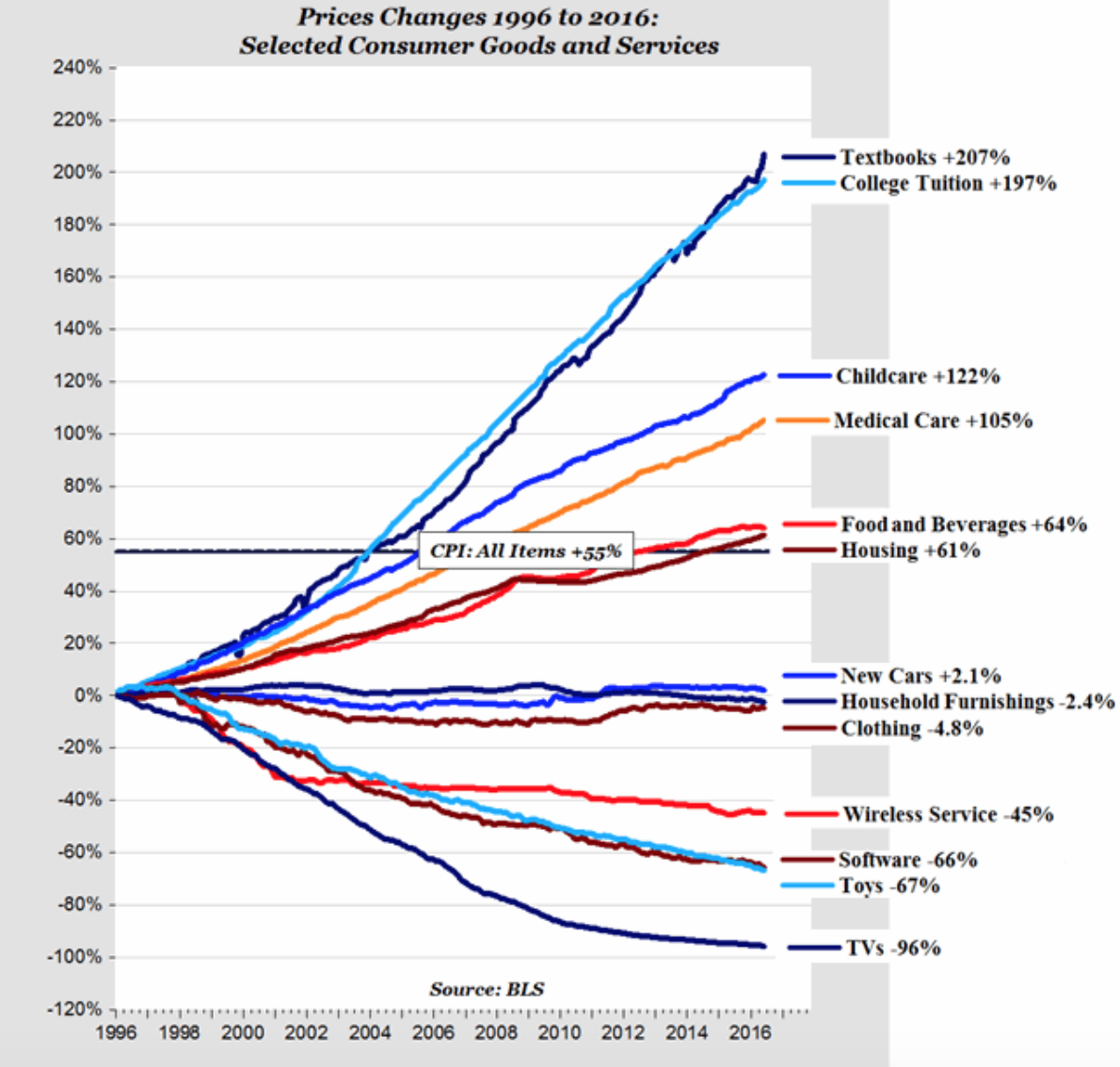 …college tuition has been growing far above the rate of inflation for some time now. I graduated in 2004 from a small liberal arts college. By my calculation, tuition has roughly doubled in that time while the overall inflation has risen a little over 32%.

According to College Board, tuition plus room and board has gone from roughly $9,800 a year for public universities in 1990 to more than $21,300 in 2018, and that’s including inflation so this looks at both figures in 2018 dollars.

That’s annual growth of almost 3% above the rate of inflation, which itself was around 3%.

(And don’t even get me started on what a racket college textbooks are. Why do we even have textbooks in the age of the Internet? Let’s make it all digital and put all the lectures in podcast format.)

If parents have to factor in 5-6% tuition inflation that’s going to be tough to save for.

These numbers aren’t as bad as they look at first glance. That’s because not everyone pays the full sticker price when going to college. There are grants and scholarships to consider. Typically, only the wealthiest of the wealthy pay full price.

Here are the published tuition, fees, room & board for public universities since 1990: 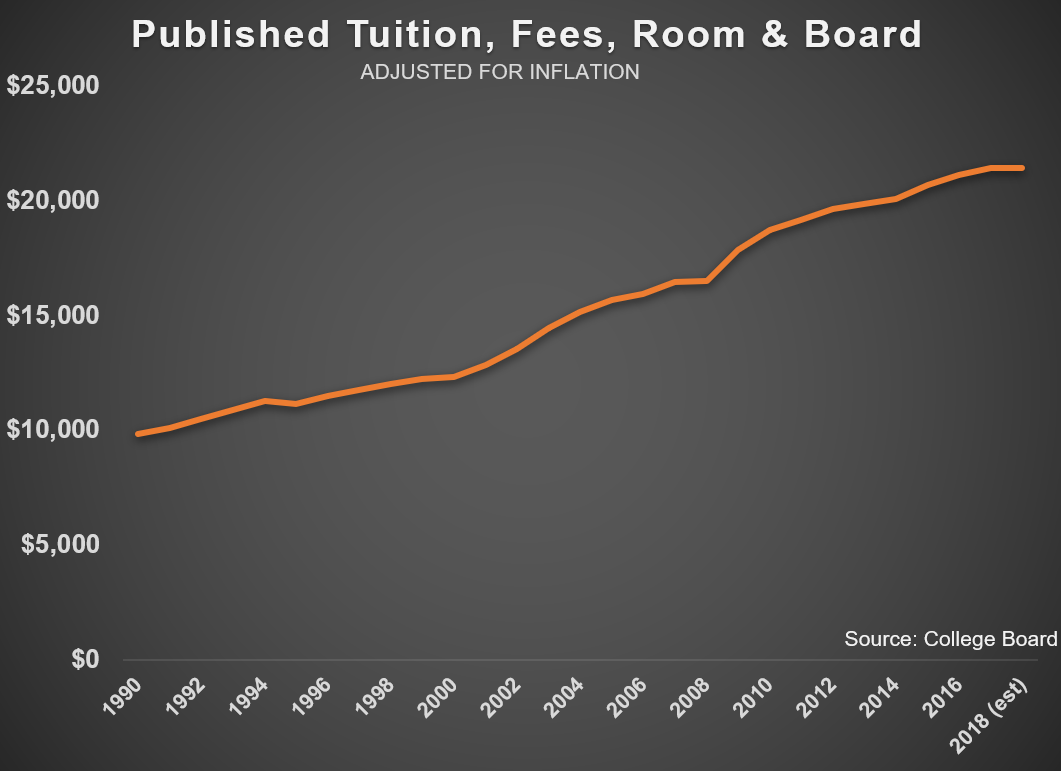 Now here are those same numbers compared with the price adjusted for grants, financial aid, and tax benefits: 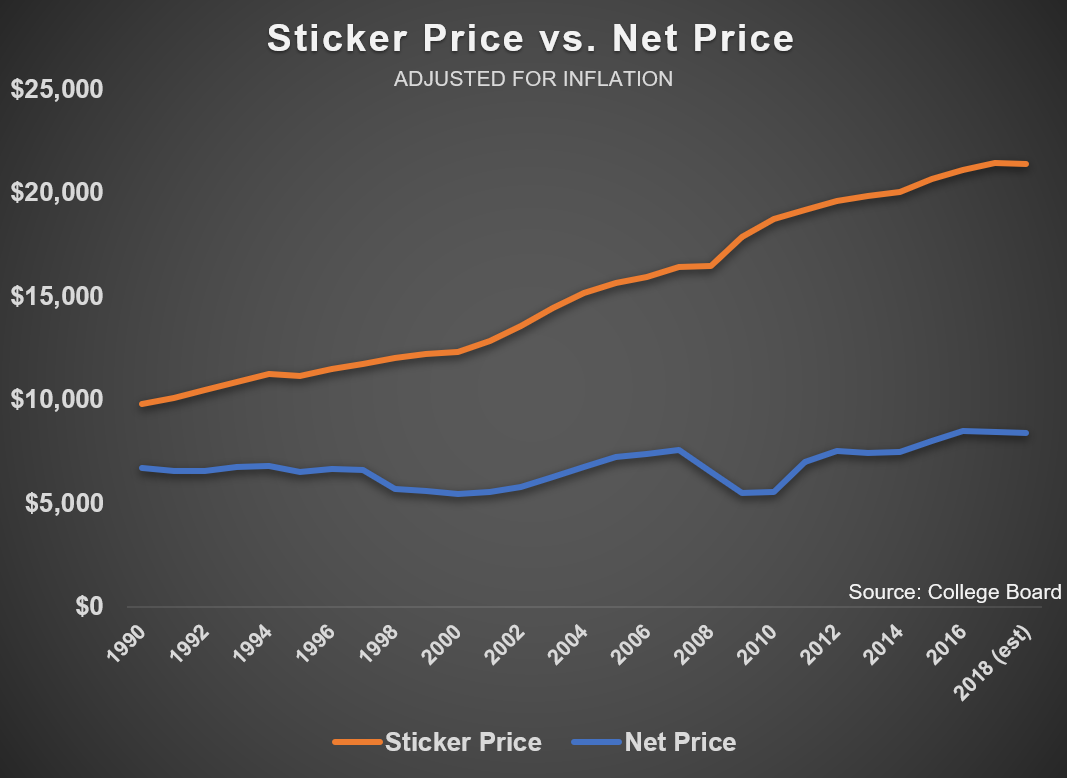 After accounting for all grants, financial aid, and tax benefits, the increase in net prices since 1990 goes from $6,680 to $8,390 per year. So now instead of the sticker price growth of almost 120% above inflation, the net price is just 26% above the normal inflation rate.

Obviously, these are averages. Not everyone will receive the same aid depending on where they go to school or what their family’s financial situation looks like.

And this is just public university data. Prices can, of course, vary widely depending on where you go to school and the type of institution.

Rich people may be able to pull more strings to get their children into the best schools but it’s likely they’ll also pay closer to sticker price for that privilege. The wealthy will have to save more but they should also have more means to do so.

And if you’re at the higher end of the wealth scale you can always supplement any savings shortfall with current income, which will hopefully be higher by the time your kids are ready to leave the nest.

Those who aren’t as well off will likely have a harder time saving but should also be in line to receive more financial aid, thus lowering the net price they pay to go to go college. The extreme example of this is Harvard where if your family earns less than $65k, your parents end up paying nothing for you to attend.

The current college system is far from perfect but it has a level of fairness you don’t see in many other industries.

Regardless of your situation, the sooner you begin saving the less you should have to save overall.

Let’s assume you start saving $200/month right when your baby is born. If you were to increase that amount by just 3% each year to account for inflation you would end up with more than $92k by your child’s 18th birthday.1

Even if college costs more than that in the future that would still likely cover a good chunk of the expenses.

If you were to wait to start saving until your kid is 5 years old, your money would grow to a little over $60k. Wait until they’re 8 and it drops to $41k.

The power of compounding when saving for college trumps even the world-beating investment returns.

Let’s assume you’re able to find the next Warren Buffett who can grow your investments at 12% per year instead of 6%. Even doubling up on the returns in the original example would only grow your money to $56k if you waited to begin saving until your child turned 8.

So you could earn half the return but nearly double the money by simply starting to save earlier.

It’s impossible to know what you’ll be paying for your children’s college. My twins are one and my daughter is four. There is so much time between now and when they go to college that it’s almost impossible for me to map out the nearly endless possibilities.

Every parent is flying blind when planning for college but I think the best thing I did to prepare financially was open a 529 for each of my three children right when they were born and began saving every month automatically.

Further Reading:
Is College Worth the Cost?

1I’m ignoring the sequence of return risk and the fact that your asset allocation would likely change over time but the point on compounding remains.