This is the exciting part. It’s more fun when stocks rise but part of me can’t help but be excited by a market correction. Maybe this is because I work in the industry but the psychology of market downturns fascinates me to no end. I also feel strongly that these are the types of markets where successful investors separate themselves from the pack.

Price always drives the narrative. Stocks were doing just fine and dandy a few weeks ago so the prevailing arguments surrounded a melt-up in prices to unsustainable levels. Now that we’ve seen a correction, that’s a distant memory. Investors are now trying to figure out how bad things can get on the way down. I’m just as guilty as anyone on this but it’s amazing how quickly the narrative shifts when the market moves like this.

RIP XIV. Take a look at the annual returns on the VelocityShares Daily Inverse VIX Short-Term ETN (XIV) leading up to this year:

Shorting volatility has been a pretty lucrative trade considering 3 out of the past 6 years saw triple-digit gains (in addition to an 80%+ gain for good measure). Then this week happened and basically, overnight this thing went down 95% or so and reached a “termination event.” It’s never a great sign when a fund has the ability to shut down because of a termination event but this was explicitly laid out by the fund company in the prospectus:

The details of what happened have been covered in-depth elsewhere (a good one here) but the craziest thing to me about the XIV ordeal is how it happened in such a seemingly normal correction. I would have assumed something like 2008 or even a typical bear market would wipe something like this fund off the map but the fact that it happened in a relatively minor market correction shows just how important it is to understand exactly how your funds or strategies are structured, especially if they are of the esoteric variety.

Shaking out the excesses is a good thing, right? People have been warning about excesses in the markets for years now. “Picking up pennies in front of a steamroller” is a phrase I’ve heard for some time now. That steamroller did some damage this week to those picking up the pennies. This correction hasn’t completely changed the fundamentals of the markets but a quick slap on the wrist for those investors and traders who have been taking too much risk is a healthy development for those worried about market excesses causing another bubble.

There are plenty of headlines you won’t see during a sell-off. It’s scary for many investors when markets fall and the backward way many people view stocks has a lot to do with this. The financial media isn’t always helpful with these views. Here are some headlines you won’t read as stocks fall:

DIVIDENDS YIELDS RISE ALONG WITH EXPECTED RETURNS AS STOCKS FALL

MARKETS FALL FOR REASONS NO ONE CAN BE SURE OF BECAUSE INVESTORS HAVE MUCH DIFFERENT GOALS, OPINIONS, STRATEGIES, TIME HORIZONS AND RISK PROFILES

I understand that fear sells and draws eyeballs to a screen but you can’t get caught up in the scary headlines when stocks fall. This cartoon is one of my favorites when thinking about this: 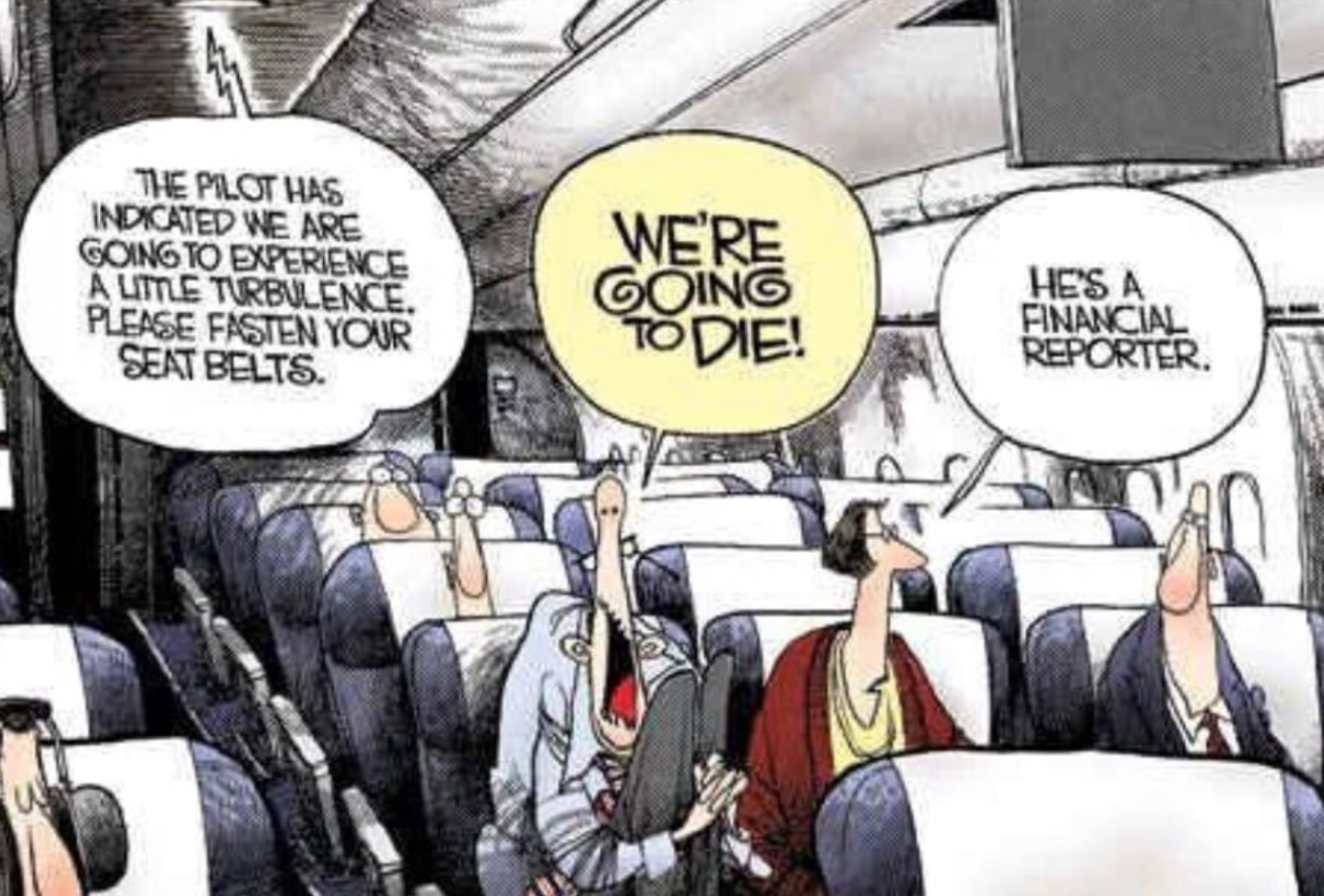 There’s rarely a good reason for a stock market downturn. I’ve been studying many of the historical bear markets and corrections that don’t get as much publicity as the usual suspects (looking beyond the Great Depression, 1973-74, Black Monday crash, the dot-com bust, Great Financial Crisis, etc.). The theme I’ve found in many of the other instances where markets fell is that very few have a catalyst for the downfall, even after the fact.

It always feels better to have an explanation for these things because then we can tell ourselves we’ll look for similar circumstances in the future to try and avoid a market fall. But most of the time the reason stocks fall is because they can’t simply rise forever. If they did that there’s no way they would provide a premium over other assets over the long haul. So even though most of the time they rise, sometimes they just have to fall.

This is still a blip in the grand scheme of things. The S&P 500 is down a measly 2% on the year. Sure, it was up close to 8% in the first few weeks of January but these losses are nothing compared to what we could see in a real correction. People freaking out need to tap the brakes until things really get out of hand. This may feel like a huge setback based on recent history but this is perfectly normal behavior when investing in stocks.

Everyone is waiting for the next 2008 but I’m guessing another 2015 or 2016 correction would be the point of maximum frustration for investors here. People may not remember at this point, but stocks fell more than 12% in the summer of 2015 and 13% in early-2016. These corrections are all but forgotten because stocks recovered relatively quickly. It seems to me that a 12-15% correction would cause consternation for many investors who are waiting for a crash that never comes.

Either way, it’s always tough using a historical playbook for these things because every new market move is unique in its own way. It’s rare for markets to fall so swiftly from all-time highs but that’s exactly what’s happened over the past two weeks or so.

The biggest thing to remember is that no one has a clue what’s going to happen next. Short-term market moves are controlled by human emotions, which are impossible to predict.

Further Reading;
Every Time Stocks Fall…
The Expectation of Losses