This year has also been eerily calm in the markets. Volatility has basically been non-existent while the largest drawdown on the S&P 500 is around -2.8%.

This is not normal. Anything is possible but if history is any guide you should prepare yourself for much larger losses than this, whether stocks finish the year in positive territory or not.

A loyal reader recently asked me to update a chart I created a few years ago that shows the worst peak-to-trough drawdown on the S&P 500 by the calendar year. Here’s that chart through year-end 2016: 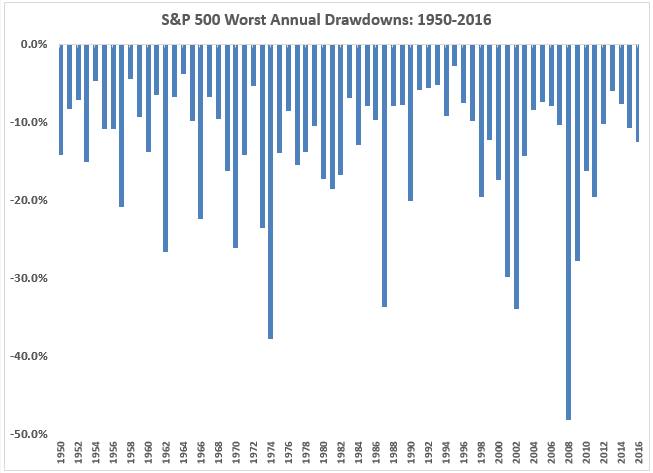 The average drawdown over this 67 year period was -13.5% while the median was an intra-year loss of -10.5%. There were double-digit drawdowns in more than half of all years while one out of every six saw a 20% or worse drawdown during the year.

The crazy thing is that although these drawdowns occur almost every year like clockwork stocks were still up over 11% per year since 1950. They were positive in 79% of all years. They were up double-digits roughly 60% of the time while they finished the calendar year up 15% or more in almost 50% of the time.

In effect, double digit losses were almost as prevalent as double digit gains even though the gains far outweighed the losses in the overall scorecard.

Stocks don’t have to crash every time they fall. In fact, the majority of the time when you’re invested in the stock market you’re going to be experiencing a drawdown for the simple fact that new all-time highs aren’t reached every single day and stocks are only up around 50% of all trading days.

Stocks will fall. The reason doesn’t really even matter. When you invest in stocks you should go into that investment with the expectation that they will go down with regularity even when they end up giving you gains over the long-term.

Further Reading:
To Win You Have to be Willing to Lose