I wrote the following piece for Bloomberg a couple weeks before the start of the stock market correction that saw stocks fall 10% or so. If you’ve been listening to the podcast, we went over some of the answers to these questions but this was still far too short of a time frame to make any definitive conclusions. I was paying attention to some of these topics during the sell-off but I’m more interested in how these factors play out over a real bear market, not just a flash correction that lasts a couple of weeks.

The stock market has been going gangbusters for a number of years, so it can be easy to forget that bear markets are still possible. These don’t come around on a set schedule, but over the past 70 years or so, they’ve occurred every four to five years, on average. Although investors can’t predict when the next bear will strike, they should work through potential scenarios to be prepared when the inevitable downturn begins.

Here are six questions to think about before the next bear market:

How bad will things get? We’ve witnessed two of the largest market crashes in history in this century alone, so you should forgive investors for assuming stocks will get cut in half every time they go into bear market territory. History tells us enormous market crashes are rare. Since World War II, there have been 15 separate bear markets.1 Only three of those produced losses exceeding 40 percent, and there were three separate downturns in the 30 percent to 40 percent range. That means stocks fell no more than 30 percent two-thirds of the time. In fact, the median drop was 26 percent. A crash is always possible, but your baseline for a bear market shouldn’t be a huge meltdown.

Let me add a point on the performance of EM equities in a major market break. Everyone expects that these assets would drop like a stone, worse than their U.S. counterparts. But historically that is not how it works. Yes, beta is very important in a bear market or any market when explaining relative performance, but so is value.

Grantham’s view is that the relatively undervalued emerging markets should hold up better in a downturn than the relatively overvalued U.S. shares. This is a development most investors likely aren’t positioned for if they’re basing allocations on historical risk-reward characteristics.

Will actively managed funds outperform index funds? The huge flows into index funds and ETFs has been in large part because of the futility of active fund managers’ efforts to outperform their benchmarks. One of the arguments from active money managers is that while they are falling behind in a raging bull market, they are sure to provide cover and outperform when it reverses course. According to data from Standard & Poor’s, that wasn’t the case during the last two bear markets. 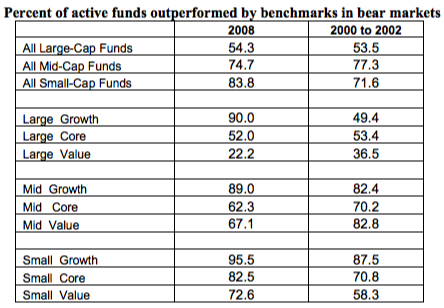 There was just one category (large-cap value) where the majority of funds outperformed during the past two bear markets. There’s already been a huge shift of flows from active to passive, but if actively managed funds get taken to the woodshed yet again during the next substantial sell-off, this trend will really heat up.

Will managed futures provide positive performance in a down market again? Managed futures were one of the few strategies that held up well in 2008 when everything else got hammered by providing positive returns during a market crisis. According to the BarclayHedge CTA Index, these funds were up more than 14 percent even as stocks around the globe fell 40 percent or worse for the year. This outperformance led many investors to add an allocation to this strategy, which seeks to follow trends in stocks, bonds, commodities and currencies, but it hasn’t worked out so well since then. From 2009 to 2017, this same index is up less than 6 percent and has had negative returns in six of nine years. This is supposed to be an uncorrelated strategy, so investors in the space hope to see crisis alpha make up for some of the underperformance throughout this cycle.