Biggest (non-crypto) Winners: Pretty Much Everything

Stocks were up around the globe as U.S., European, Japanese and emerging markets have all gained in excess of 20%. Bonds were up. Gold was up. REITs were up. Small caps, mid caps, individual countries, you name it.

Morningstar’s Jeffrey Ptak even ran the numbers for me on the entire mutual fund universe which showed that nearly 95% of all funds are positive on the year. 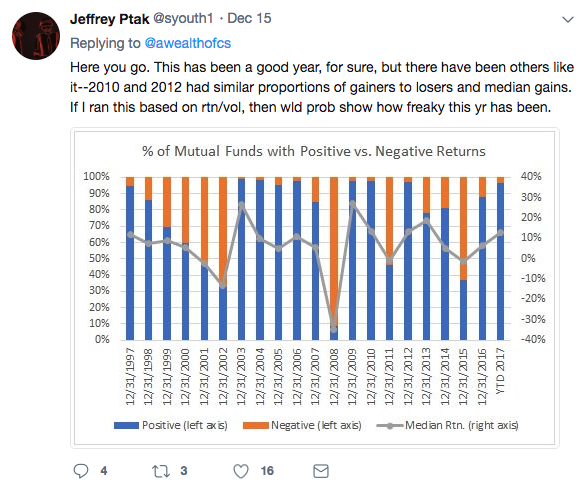 Also, betting against volatility continues to crush it. XIV (the inverse VIX fund) is uo almost 200% this year (following a gain of 80%+ last year). This trade will get killed at some point but those shorting volatility have made a fortune in the last couple of years.

MLPs also took a hit this year as AMLP is down nearly 9% (despite a dividend yield north of 8% — another good reminder that yield alone is not enough for an investment thesis). And energy stocks are the sole loser of the S&P 500 sectors as XLE is down close to 4%.

I know people keep getting sick but I can’t stay away from Chipotle. Apparently, that’s not the case with everyone. Chipotle stock (CMG) is down another 20% in 2017 and that’s after falling 30% and 21% in 2015 and 2016, respectively. I always figured Chipotle would be the new McDonald’s for millennial families but things are not looking so good on that prediction. 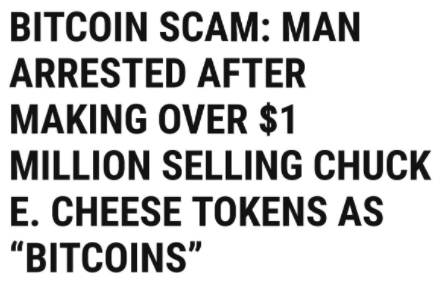 Okay, this was actually a fake. But I’ll bet you believed it when you first read it (I did at first) based on how crazy things have been in cryptocurrencies this year.

Worst Screenplay (market narrative): The Stock Market Will Crash With Trump as President 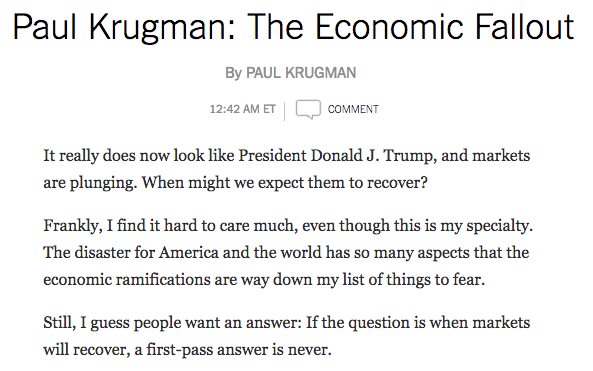 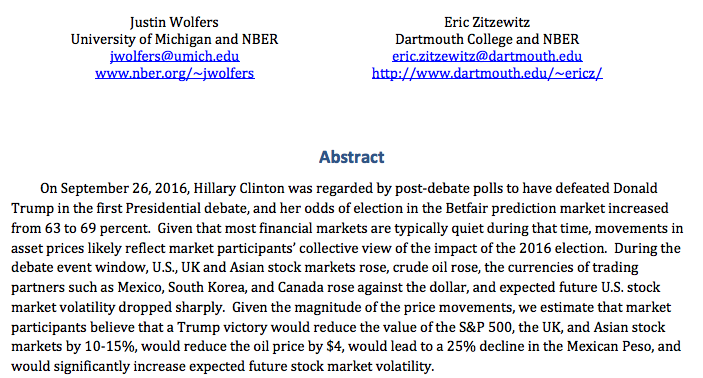 All called for a crash or dire results in the markets which obviously hasn’t happened (…yet, they would probably say). Not only did the stock market boom this year, but there hasn’t been a single down month since Trump was elected president.

Of course, he had nothing to do with these results because the stock market doesn’t care who the president is but this provides a nice reminder that politics and investing don’t mix.

From 2007 through the end of 2015, emerging markets stocks basically did nothing, with a total return of just 6% over that nine-year stretch. EM has very quietly put together a string of two consecutive years of double-digit gains and is now up almost 45% in the past two years.

The world stock market is now up 14 months in a row (including December). That beats the longest streak ever without a down month which occurred in the mid-1980s (12 in a row). International markets have lagged for years but finally kept pace or even outpaced the U.S. in many markets this year. 2017 was a global effort in the stock market.

Cliff Asness and Rob Arnott trading blows on quantitative factor investing through blog posts, research papers, footnotes, and presentations is the height of entertainment for investing nerds like myself. These two probably have more in common than they would care to admit but the constant war of words and subtweets in their research always makes me laugh. I never thought academic quantitative finance papers could be so much fun but this feud definitely helps the cause.