The Worst Start to a Year Ever: The S&P 500 through its first 28 days this year

Michael Batnick put this one together for our latest client call: 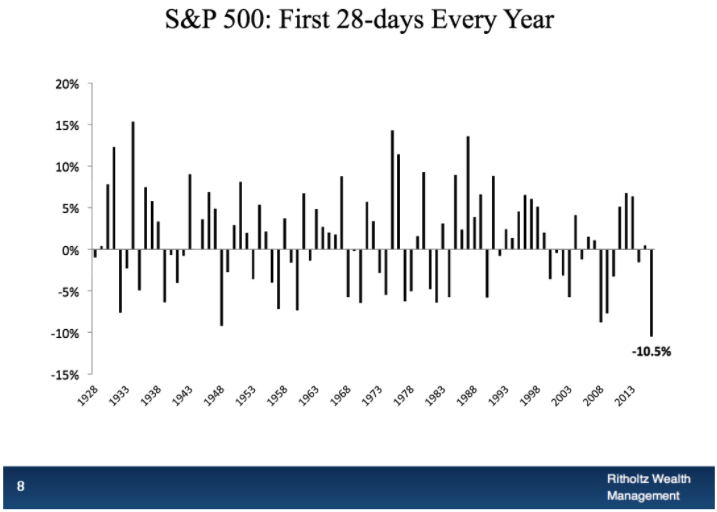 This one is a repeat winner. Here are the calendar year returns beginning in 2009:

One more year of positive gains and it would tie the all-time record of consecutive calendar year gains which occurred from 1991-1999. There are still a few more days left in 2016, but assuming we don’t see a mini-sell-off before the end of the year, not only will it be eight straight years of gains in large-cap U.S. stocks, but six of the last eight years will be up double digits. I’ve been hearing about lower future returns since 2010 and bubbles since 2012. It’s always the timing that gets you on these calls…

Gold itself has almost entirely round tripped this year as it’s gone from a 30% or so gain in July to up just 7% now. But gold mining equities have seen an even wilder ride, especially the leveraged Junior Gold Miners Index Bull 3x ETF (JNUG). This chart is amazing:

If Brazil and Russia were the value plays of 2016, then NVIDIA Corp. (NVDA) is definitely the darling momentum play. This stock is on an absolute tear. It’s up 234% in 2016. It’s up 70% since November 10th alone. And coming into the year it wasn’t exactly an unloved, underperforming stock. Here are the annual returns of the previous three years:

So not only did this stock gain more than 200% this year so far, but it was up over 180% in the three years leading up to 2016. It’s difficult to buy when there’s blood in the streets but I wonder how many investors had the fortitude to hang onto this stock while it was screaming higher year after year.

The fact that value and momentum investments such as these three examples can co-exist is what makes the markets so interesting, yet maddening at the same time.

For the past few years, I’ve been seeing stories all over the place about how the price of delivering solar power has fallen off a cliff. This may be true and solar may yet prove to be one of the future solutions to our energy problems but the Guggenheim Solar ETF (TAN) hasn’t exactly benefitted just yet. Here are the annual returns since inception of this fund in 2009:

From 2009-2016, the fund is now down over 75%. This is a healthy reminder that innovation and investing don’t always lead to the same end results.

Through June, financial stocks as a group were off to their worst start since 2011, down just about 10% after being down almost 20% earlier in the year. The Financials ETF (XLF) is now up almost 25% on the year, trailing only energy (XLE +30%) in terms of sector performance. But the individual names are even more impressive.

Maybe the craziest thing about the recent run-up in financials is that the sector is still showing a negative return over the past decade — XLF has an annual return of -0.2% in that time.

Technically, we are in a rising rate environment, as the 10-year treasury yield has risen from a low of 1.3% or so in July to almost 2.6% now, but on the year rates were only up 30 basis points from where they finished last year:

This is actually the second year in a row that rates have risen. They went from 2.2% to 2.3% in 2015. While the latest moves may seem extreme, we would have to see a much larger move to be in an actual “rising rate environment” in my opinion. It could happen but people need to put these things in perspective and have a longer lookback period before jumping to conclusions.

Remember when RBS said to sell everything? Or when Brexit was going to crush the markets? Or a Trump win was going to lead to a market collapse? Binary market predictions are difficult, to say the least.

Sanford Bernstein & Co. made some waves this summer by putting out a research piece entitled “The Silent Road to Serfdom: Why Passive Investing is Worse Than Marxism.” Active fund firms are on the heels at the moment. Just take a look at the fund flows so far this year:

The push into low-cost investment products is secular, not cyclical, but it’s been fascinating to watch the response from active investors and fund firms who continue to pretend this is just a fad. The backlash from the financial industry has been something to watch. Very few firms have responded the right way. Until they do, Vanguard is going to continue to eat their lunch.