Over the past few weeks there have been rumors floating around about potential changes to the 401k retirement contribution limits via the current debate around tax reform.

It’s fun for policy wonks to speculate on these things but most of the promises and ideas you hear from politicians never see the light of day. My two cents is that even politicians aren’t dumb enough to take away a major tax break for retirement, considering how many people are already struggling to save for their later years as it is.

The 401k defined contribution retirement plan isn’t a perfect option to get people to save more but it is an important one. As pension plans become a thing of the past for most new employees the 401k will only continue to grow in importance in the coming years as a workplace retirement vehicle.

A few weeks ago I was sent a presentation given by Peter Brady, an economist at the Investment Company Institute, about how prepared U.S. savers are for retirement. Brady gave this presentation in late-2014 but the numbers are still relevant to our discussion.

This chart shows the breakdown by retirement savings vehicle and gives a good sense of the growth of the 401k over time: 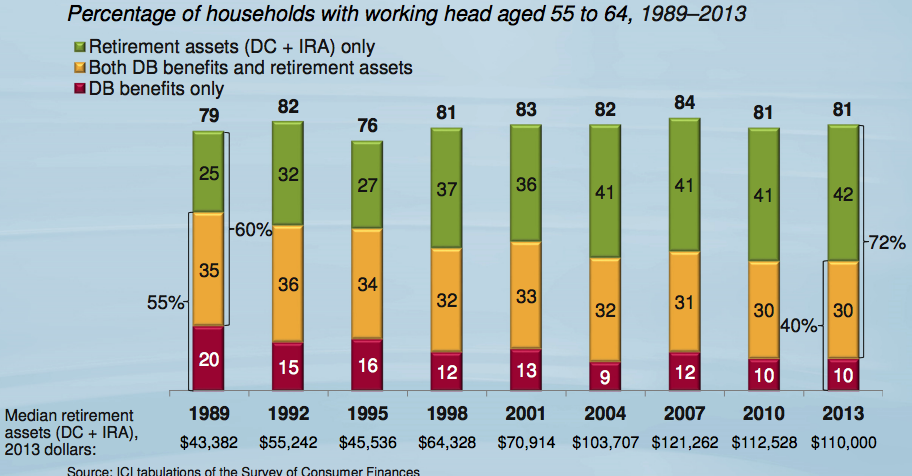 You can see a steady decline in the weighting of savers who have access to a pension (defined benefits) but 401ks and IRAs (defined contributions) have actually picked up the slack. What was somewhat shocking to me about these figures is that the retirees haven’t seen a dropoff in their savings over this time frame. Instead, they’ve increased their balances on a real basis.

While this looks like a positive for the savings habits of Americans, the problem with the defined contribution system is that pensions were much simpler. With 401ks people have to fend for themselves with investment recommendations and fund selections. Fund line-ups leave much to be desired in some 401ks (although targetdate funds are helping in this respect). Plus, pensions gave people a guaranteed income stream they could rely on. Now investors have to draw down their portfolios and navigate the ever-changing financial markets which is another duty many people are handling on their own.

One of the other downsides to the 401k retirement world is the fact that it’s unfair. Many people simply don’t have access to a 401k plan: 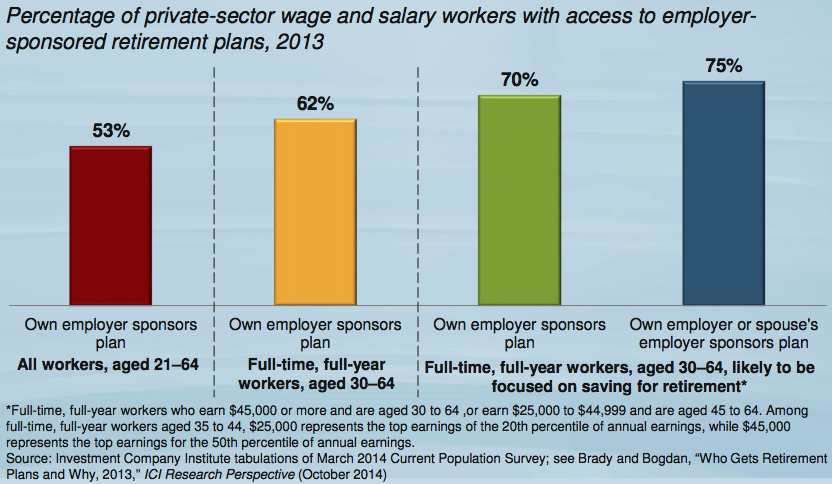 When broken down by the size of the firm you can see small businesses are at a huge disadvantage here: 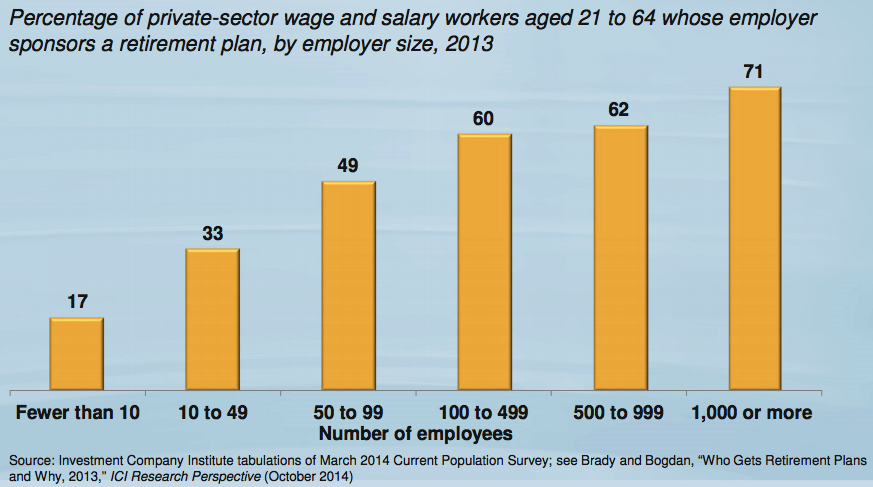 It’s a shame it’s so difficult for small companies to offer retirement plans to their workers. Not only is it cost prohibitive but the majority of the small businesses who do offer these plans have little-to-no experience on the investment side of the equation so they don’t have any business selecting a corporate retirement plan on behalf of their employees. These are typically the firms who get taken advantage of with outrageous fees and investment products (although the financial product industry doesn’t discriminate — large firms can get taken for a ride too).

This is where some sort of universal retirement savings scheme (ahem, my TSP for everyone idea) would come in handy. That would also make it more portable for those who work for multiple companies throughout their career (pretty much everyone).

Surprisingly, for all of the talk about a retirement crisis, the poverty rate for the elderly have been declining for years: 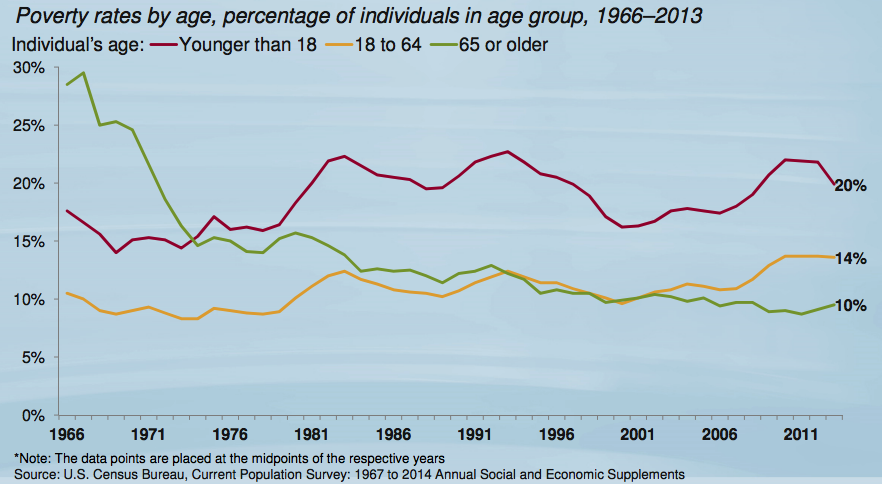 My guess is the fact that housing has done so well the past 2-3 decades is a huge reason for this because it provides people another way of accessing capital if need be by borrowing against it.

Finally, I loved this table showing how people’s financial priorities change over time as they age: 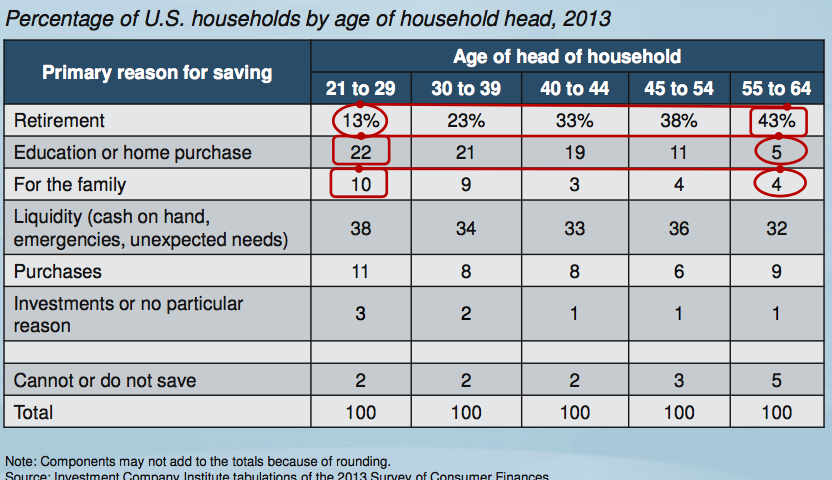 For most people, a focus on saving for retirement won’t begin until their 40s or 50s. On the one hand, this is a shame because they miss out on the magic of compounding. On the other hand, it’s a reality that other financial goals take precedent in your 20s and 30s.

Those people who are putting off retirement saving until their later years better have a high savings rate to make up for a lack of compounding. Luckily, at this stage in life you should be making more money, have your house mostly paid off, and the kids out of the house. People in their 50s should be able to save more but the degree of difficulty increases if other life obstacles get in the way.

As baby boomers continue to retire en masse in the years ahead and millennials begin to settle down and have families it will be interesting to see how these numbers evolve.

And hopefully cooler heads will prevail and the 401k limits are raised and not lowered if we ever see any tax reform.

Further Reading:
Some Lessons For Living From Older Generations