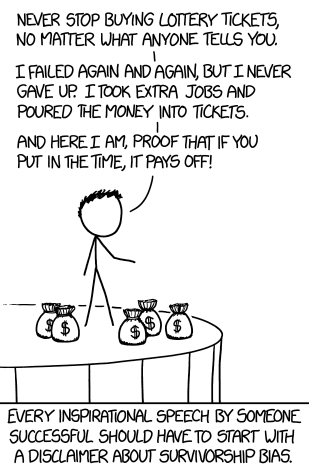 In a 2005 Powerball drawing a strange thing happened.

Having 110 people pick the same numbers across 29 different states was quite rare, considering at most there were 4-5 people who would split the prize in the average drawing.

Each winner was due to make six figures, making the total payout was $19 million higher than expected. This raised some eyebrows and caused people at the lottery association to look into how this could have happened. After ruling out fraud, they finally figured it out, as told by the New York Times:

Investigators visited dozens of Chinese restaurants, takeouts and buffets. Then they called fortune cookie distributors and learned that many different brands of fortune cookies come from the same Long Island City factory, which is owned by Wonton Food and churns out four million a day.

“That’s ours,” said Derrick Wong, of Wonton Food, when shown a picture of a winner’s cookie slip. “That’s very nice, 110 people won the lottery from the numbers.”

If any of these 110 people worked in the investment business they probably would have started their own newsletter — My Secret Formula for Winning the Lottery.

I was reminded of this story while reading a New York Times profile on angel investor Jason Calacanis. Calacanis is worried about how technology is going to impact the jobs of millions of Americans and wants to help this group invest in tech to make up for it. His new book is called Angel: How to Invest in Technology Startups — Timeless Advice From An Angel Investor Who Turned $100,000 into $100,000,000.

Here’s the backstory on how he earned his $100 million:

In 2009, the venture capital firm Sequoia enlisted Mr. Calacanis as one of its “scouts,” an informal network of entrepreneurs who look for promising companies on the firm’s behalf. As part of that program, Mr. Calacanis invested $25,000 on a friend’s crazy-sounding tech-enabled cab company. The friend was Travis Kalanick; the company was Uber. And despite that company’s recent turmoil, the deal has turned into Mr. Calacanis’s biggest win as an angel by far, worth about $100 million on paper.

For those who are unaware, Sequoia Capital is one of the most well-known venture capital firms in the world. So while Calacanis took a huge right risk in this situation and hit the jackpot, I’m not sure how much timeless advice 99.9% of investors can glean from someone who has contacts at one of the best VC firms in the world who made his fortune on a single home run investment.

Even the best investors in venture capital have a hard time picking and choosing the right deals and investments. Most are complete failures. I know from experience how ultra-competitive this space is and it’s only gotten more so in recent years. Even if you put in the time to educate yourself about angel investing it’s one of the harder areas of the markets to invest successfully in because the opportunity set is so limited and hard to access.

I have a theory about comedians that the more successful (read: wealthy) they become the less funny they become (Jerry Seinfeld and Larry David are probably the exceptions to this rule) because they lose touch with reality or begin to take themselves too seriously.

This seems to apply to most uber-wealthy people who try to give financial advice to the average person as well. I can appreciate successful people who would like to share with others what made them successful. But no amount of books, morning routines, meditation rituals or inspirational quotes are going to make you filthy rich. The circumstances are drastically different than people in the middle class are dealing with. And it’s impossible to replicate luck.

Obviously, this isn’t always the case. Not all wealthy people are out of touch lottery winners. But people have to temper their expectations when trying to emulate the top 1% of the top 1%. You can be inspired by these people but following their blueprint for becoming wealthy is a different story.

I’ll give Calacanis the benefit of the doubt and assume he doesn’t have ill intentions here. But most people are better off learning how to get their personal finances in order and investing in themselves than trying to find home run investments that will change their lives.

Sources:
Who Needs Giacomo: Bet on the Fortune Cookie (NYT)
Should the Middle Class Invest in Risky Tech Start-Ups? (NYT)