“Hey, why don’t I just go eat some hay, make things out of clay, lay by the bay? I just may! What’d ya say?” – Happy Gilmore

You know a comedy movie is going to be terrible if they can’t even string together enough funny parts for the trailer.  The new Adam Sandler-Drew Barrymore movie Blended is a case in point:

I don’t have to see this movie to tell you it’s not going to be funny because, unfortunately, Sandler’s movies just aren’t funny anymore.  Here are his last three movies, all bombs: Grown Ups 2, That’s My Boy and Jack and Jill.

It kills me to say this because his early movies are some of my all-time favorites.  His run in the mid-1990s of Billy Madison, Happy Gilmore, Bulletproof and The Wedding Singer was epic.  Each of these movies are full of one-liners people still use to this day.

To show you how far Sandler’s movies have fallen off, here are the Rotten Tomatoes scores by both audiences and movie critics from the early classics to the latest duds: 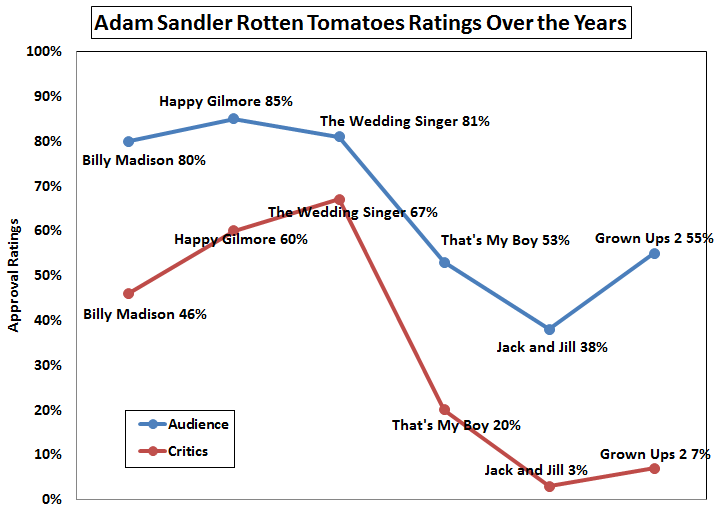 My theory is that complacency sets in for most comedians once they make it headline-movie star big. Sandler is not incentivized to make a Billy Madison or Happy Gilmore-type of movie anymore.  He can do an underwhleming family movie once a year, make his $20 million and call it a day without taking any risks.

He’s already made it big so what’s the point of making a movie that will potentially rock the boat?

Jim Rogers had a great interview in The Clash of the Financial Titans.  One of his responses about the longevity risk of trying to beat the market over the long-term brought to mind my theory on Sandler (emphasis mine):

I know of very few people who can beat the market over time. I mean, I’m not the only one who’s observed that. Academic studies have shown repeatedly that most people do no beat the market over any long period of time, for whatever reason. The may be like me, they get lazy, you know? Or just quit and turn their money over to someone else. But in fact, I don’t know any who have beaten the market consistently for any long periods of time. There may be some; I just don’t know about them.

To become a truly great investor and outperform the market on a consistent basis you must (1) develop a strategy that gives you a repeatable edge over the markets, (2) have an understanding of financial market history, (3) have a true passion for the craft to put in the time and effort required and (4) develop enough emotional intelligence to control and take advantage of the many behavioral biases of market participants.

Even then it takes a considerable amount of luck.

But to stay a great investor for a really long time brings in a whole new set of issues and biases.  If I develop a successful track record, will complacency set in?  Do I continue to take the same risks if the majority of my net worth is tied up in my fund? Will performance suffer if the fund gets too large?  Do I still have the same passion to put in the time?

Rogers makes a great point about the risks involved when you place your money with the greats in the investment world after they’ve made it big. He walked away at the top of his game, but many aren’t able to do this.  It’s not easy to turn down new investors that are basically throwing money at you.

Jerry Seinfeld was on the Howard Stern show last year and discussed ending Seinfeld even though he could have kept the successful series going.  Howard asked Jerry how much money NBC offered him to make just one more season of the show.  Seinfeld said is was in upwards of $150 million!

Jerry wanted to go out on top and didn’t want complacency to set in.  Any die-hard Seinfeld fan (myself included) will tell you that the show was starting to jump the shark in the final season (which didn’t include co-creator Larry David) culminating in that unbelievably bad final episode.  Seinfeld said he didn’t want to taint the legacy of the show by doing one more season just for the money.

Now, I’m all for people getting paid what their worth.  There is no such thing as a sellout, just what the market is willing to pay.  How can you blame Sandler for making paycheck movies or fund managers for taking in tons of new capital? Just don’t be surprised if the quality of the product decreases as success and wealth increase.

An old investing saying is that stocks help you make money while bonds help you keep money.  The point being take to your risks to build your wealth but there’s no reason to continue to take those same kinds of risks once you’ve made it.

The same thing that we’ve witnessed with Sandler’s latest movies can happen to even the best investors once they put together a history of outperformance.  There comes a point when the potential for asset gathering, living off of management fees and a reduced tolerance for risk-taking can become almost too easy.

Just one more reason why staying on top in the investment world is so difficult.

My Quick Book Review: Clash has gotten plenty of media attention since it’s release so I’ll keep my review short: Those Guys Have All the Fun: Inside the World of ESPN is one of my favorite books of the past five years or so because the entire book is filled with first-hand accounts through interviews with all of the relevant players involved with ESPN.

Clash takes a similar route with tons a great interviews, but it’s also much more than that. The honesty and insider knowledge you get from these interviews is unbelievable. Additionally this book contains financial market history, a sense of perspective on market pundits and the biases involved from both the forecasters and those that try to use them, easy to understand advice for novice investors and much more.  It’s one of the most original investing/financial market/advice books I’ve ever read.  Brown and Macke wrote a truly excellent book here.  Highly recommended.