A couple of years ago, Tadas Viskanta of Abnormal Returns asked myself and a handful of other bloggers the following question in his finance blogger wisdom series:

Uber just raised VC monies at a $17 billion valuation. Are the private markets the new public markets? Is the average investor missing out on his/her inability to meaningfully participate in the private/pre-public stages?

This was my response:

Average investors have a hard enough time dealing with periodic losses in the stock market. Venture capital investors are often looking for 1-2 home runs in a portfolio of 20 or so private investments. Roughly 75% of all start-up companies fail and seeing an investment go to zero would be far too difficult for the majority of individuals to handle for the slight possibility of finding one or two big winners. We really only hear about the private company success stories and forget about all of the failed ventures it took to get to that one big winner. Average investors are better off sticking to the public markets.

Many investors assume that the stock market is rigged (in some ways it is, but it’s always been rigged). In the private markets, especially the venture capital industry, the markets basically are rigged in favor of a small group of funds and investors. They have access to deals, entrepreneurs and investment opportunities that the majority of other investors do not. And because the VC industry is relatively small in comparison to other markets, there’s not always enough to go around in terms of the best deals and returns. This is why the same VC firms are almost always the best performers every cycle (and good luck getting into those funds).

As Tadas alluded to the success of certain VC-funded companies — and the fact that they have all been staying private for much longer than they once did — gave many retail investors the sense that they were missing out. Fear of missing out is never a great investment strategy, but watching someone else get rich under the assumption that it’s easy is a very seductive line of reasoning.

Thanks to a few mutual fund companies the retail investor has gotten a shot to partake in some of these VC deals. They tend to be small positions in the overall funds, but firms such as Fidelity and T. Rowe Price have added some venture deals to certain funds they manage. VC Mark Suster of Upfront Ventures recently detailed some of the latest performance numbers courtesy of Fidelity: 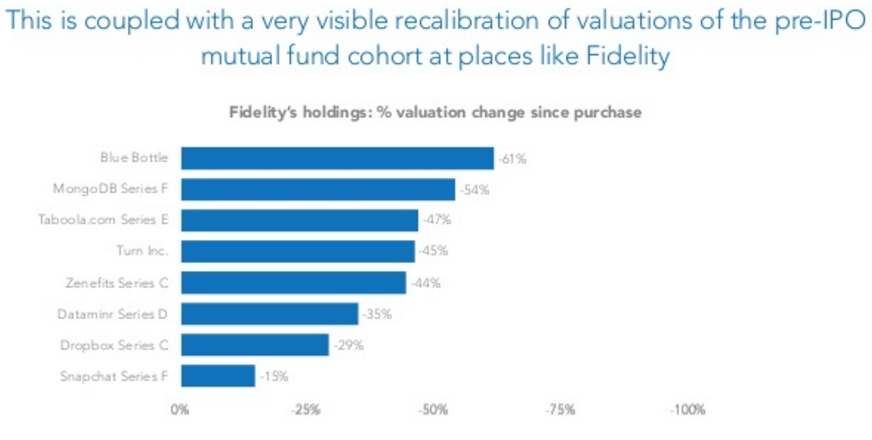 It hasn’t been pretty as many unicorns have come back down to earth.

But surely some of the venture-backed companies that eventually went public have done pretty well, right? Unless you invested in Facebook, most of the IPOs in venture land have also had a rough time. Here are the numbers from Charlie Bilello: 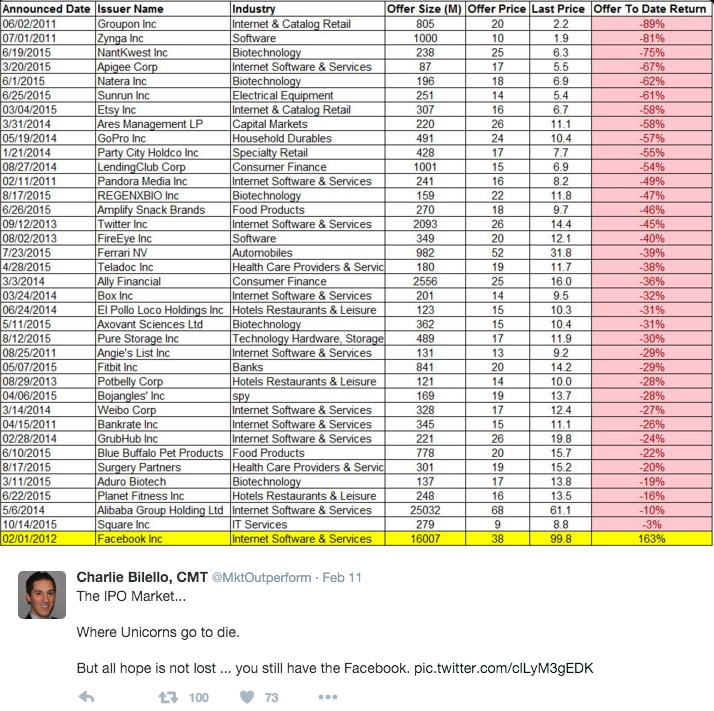 This isn’t an indictment of the VC world. Many of the early investors in these companies still did extremely well. But individuals have to remember that venture capital investing in predicated on the fact that the majority of the companies that they invest in will go bust, but the few that work will be home runs. Finding those companies as an individual and getting a seat at the table is nearly impossible.

Further Reading:
Chris Sacca on the Power of Incentives