People in finance often say things because they make for good sound bites but don’t actually back them up with solid reasoning. Sound bites make you sound intelligent but rules of thumb always require some context. In this piece I wrote for Bloomberg I provide some context around one of the most misused phrases in all of investing.

Sir John Templeton wrote “16 Rules for Investment Success” in 1993. The following is by far the most quoted passage:

The investor who says, ‘This time is different,’ when in fact it’s virtually a repeat of an earlier situation, has uttered among the four most costly words in the annals of investing.

“This time is different” is something of a sacrilegious phrase in the investment industry. Every time markets, corporate fundamentals or long-followed economic ratios enter above-average territory there are sure to be pundits or investors warning about complacency and imminent mean reversion. Anyone who claims it’s different this time is mocked with disdain for daring to question long-term financial relationships.

Although mean reversion plays a huge role in the financial markets — above-average performance tends to lead to below-average performance, and vice versa — investors must be flexible about the averages they’re using in their analysis.

For example, the CAPE ratio is far above its long-term averages, which date back to 1871. But look at the differences in the average from various starting points since then: 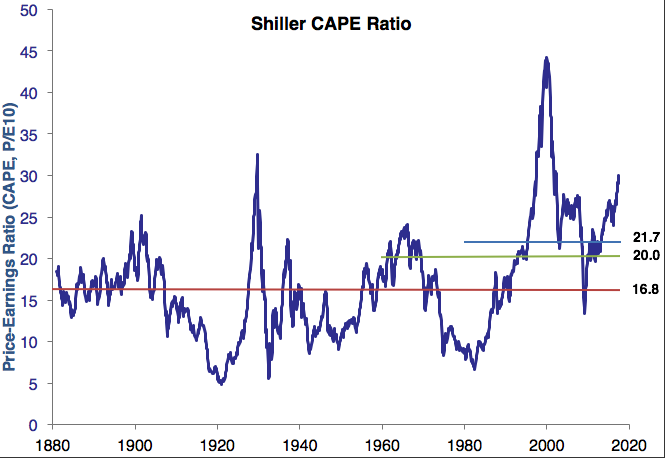 The average CAPE since 1871 is 16.7, but if we take the average from 1960 it jumps to 20, and from 1980 the average is 21.7. The current reading of 30 is elevated when looking at each of these averages, but the question for investors becomes: Which long-term average is the most representative of today’s markets?

The composition of the corporate world and financial market structure are also completely different today. Consider the following:

Not only is this time different, but it’s different every time. This is why so many investors are able to create market-beating strategies with the benefit of hindsight that go on to underperform in the real world. Markets are constantly evolving based on our updated knowledge of the past.

Outperformance can evaporate. Flows into certain products or strategies can change their fundamentals. Any asset can become a wonderful investment at one price and a terrible one at another.

Historical context is critical for understanding the financial markets. What else do investors have to go by? But you have to put things into perspective and realize that markets are a complex adaptive system. They’re not static and they don’t always follow preset rules.

Since we’re providing context, here is what Templeton was actually talking with his famous four words. This was the lead-in to that statement:

The only way to avoid mistakes is not to invest — which is the biggest mistake of all. So forgive yourself for your errors. Don’t become discouraged, and certainly don’t try to recoup your losses by taking bigger risks. Instead, turn each mistake into a learning experience. Determine exactly what went wrong and how you can avoid the same mistake in the future.

And here’s the follow-up:

Templeton wasn’t talking about financial ratios or models when he stated that the four most dangerous words are “This time is different.” He was talking about human nature. That’s the one constant that remains in the markets.

One definition of insanity is doing the same thing again and again and expecting a different result. This is what Templeton was referring to with the four most costly words in the annals of investing.