At some presentations I gave last week I included the following slide: 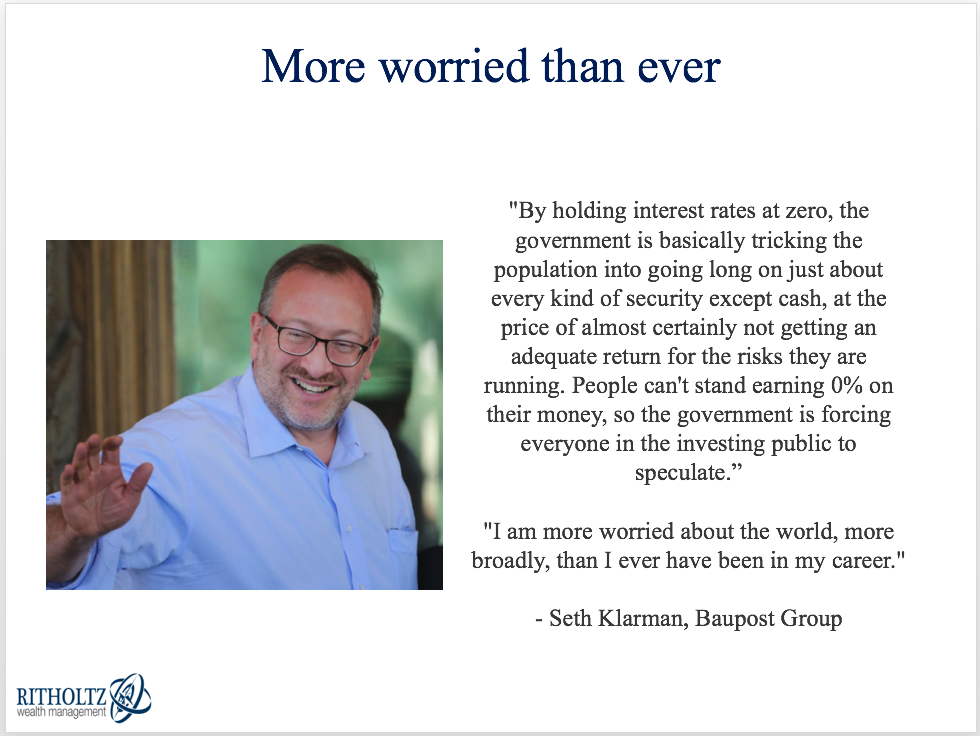 These quotes come from an interview legendary hedge fund investor Seth Klarman gave to the Wall Street Journal. Klarman isn’t as well known to the general investing public as some of his peers but his track record ranks right up there in terms of the greatest of all-time. When someone like Klarman makes these types of warnings it’s hard to ignore.

But here’s the kicker — Klarman made these comments in May of 2010. The S&P 500 is up almost 170% since then. The economy hasn’t gone off the rails. The European Union didn’t fall apart.

Seeing that he’s a hedge fund manager and all, he did hedge these comments somewhat by saying his ideas, “on bottom-up opportunities in undervalued securities are more likely to be accurate than my top-down views on what’s going to happen in the world at large.”

The point here is not to show a poor macro forecast by a well-known investor to make myself feel better. I am simply trying to point out the fact that markets are really, really hard. You can be at the top of the game for a long time and still have no clue what’s going to happen.

It may be hard to remember this now but at the time it wasn’t quite so clear markets would see such a strong recovery with the onset of the European debt crisis, double-dip recession worries, and the memory of the worst financial crisis since the Great Depression fresh in investor memories.

Per Bloomberg, Klarman is returning capital to investors:

Seth Klarman’s $30 billion Baupost Group plans to return some capital to investors by year end because the hedge fund doesn’t see enough opportunities in the market.

Investors were told in recent weeks that the firm expects to return capital for the third time in its history, according to a person with knowledge of the matter. Boston-based Baupost is holding 42 percent of its assets in cash and wants to balance the money it manages with potential opportunities, said the person, who declined to be named because the information is private. It is unclear how much will be given back.

Hedge funds have taken it on the chin in recent years but I think investors can learn a lot from these two stories about Seth Klarman:

Watch what they do, not what they say. Klarman doesn’t make many public statements but plenty of other high profile portfolio managers do. Most of the time what they say in public has little-to-no bearing on how they manage assets.

Macro tourism has really ramped up since the financial crisis so everyone feels the need to share their opinions on the state of the world. Client letters, TV appearances, interviews and speeches tell you a lot about a fund manager’s personal opinions but usually very little about actual investment insights.

The majority of investors will never be able to access the best hedge fund managers. I saw Klarman speak to a group of foundations and endowments in 2009. Everyone in the room, many with multi-billion dollar portfolios, wanted to invest with Baupost Group. Klarman rarely opens up his fund to new investors and when he does there’s a queue of institutional investors on a waiting list to get in.

The paradox of active management is that there are investors out there who can beat the market and have done so handily for years but they probably don’t want or need your money. And finding the next Seth Klarman might be even harder than finding your way into his fund.

Treating your investors right is more important than fee revenue. Some fund firms may not agree with me here but one of the reasons Klarman’s track record is so phenomenal is because he’s selective about who he lets into his fund and tries to keep assets at a manageable level. Sending money back to investors when there aren’t enough opportunities in the markets may seem like madness to some portfolio managers.

I think it’s a highly respectable practice. Klarman runs a unique style of investing. He’s giving his investors the chance to allocate their funds elsewhere while he has a dearth of options with his opportunistic style. I’m sure he’ll open things up again when assets are on sale yet again, whenever that may be.

If history is any guide, no one knows when that distress will hit.

Further Reading:
A Lesson in Judging Risk From Seth Klarman