Following up on my post about preparing for a bear market, a reader asks:

Do you really think bonds will not correlate with stocks in a bear market this time? Rates are historically low and likely to go up? Just seems like bonds will crater too. Of course, one will collect the meager interest.

This is a good question and one many investors are likely worried about with interest rates so low.

Before getting to my thoughts on how likely it is that both stocks and bonds crater together, let’s look at the historical track record of a 50/50 stock/bond portfolio using 5 year total returns (ensuing performance matches up with starting year): 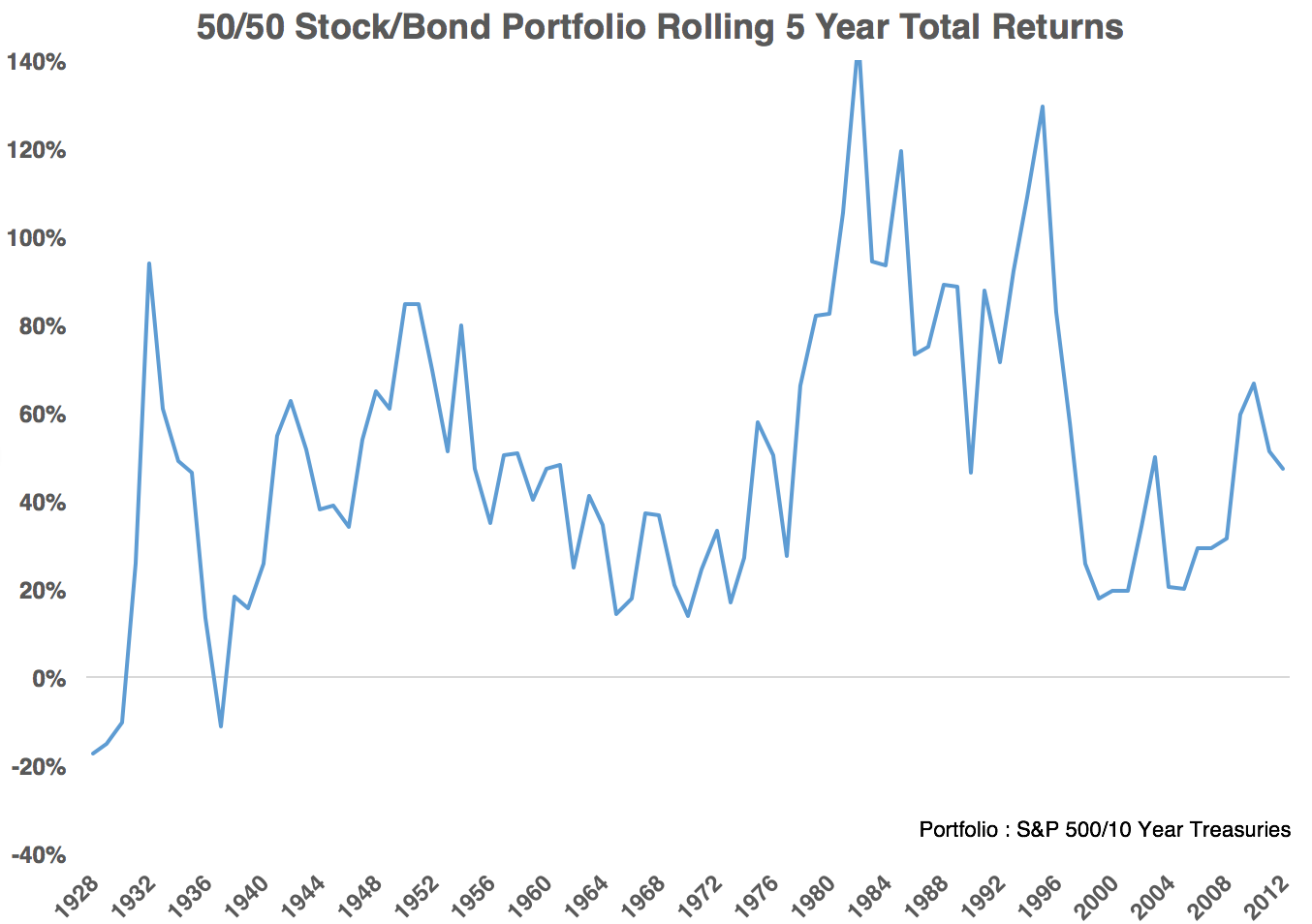 The only time this mix of stocks and bonds went negative over 5 years was in the aftermath of the Great Depression when stocks fell more than 80% (bonds held up surprisingly well during this period). Otherwise, this simple portfolio has fared pretty well over a number of different market environments. The results have been cyclical but a split of stocks and bonds has seen positive returns over every 5 year period of the past 80 years or so.

I’ve shown these stats before but it’s worth revisiting — here are the three times since 1928 that stocks and bonds (as defined by the S&P 500 and 10 year treasuries) both fell during the same year:

Of course, the past says nothing about the future. I’ll offer a few scenarios that could see both stocks and bonds getting hit at the same time and then follow-up with a few comments on why it’s a low probability event:

I’m sure you could come up with other scenarios but the most likely one to me is sky-high inflation or a huge spike in rates. Here’s the same graph from above on an after-inflation basis: 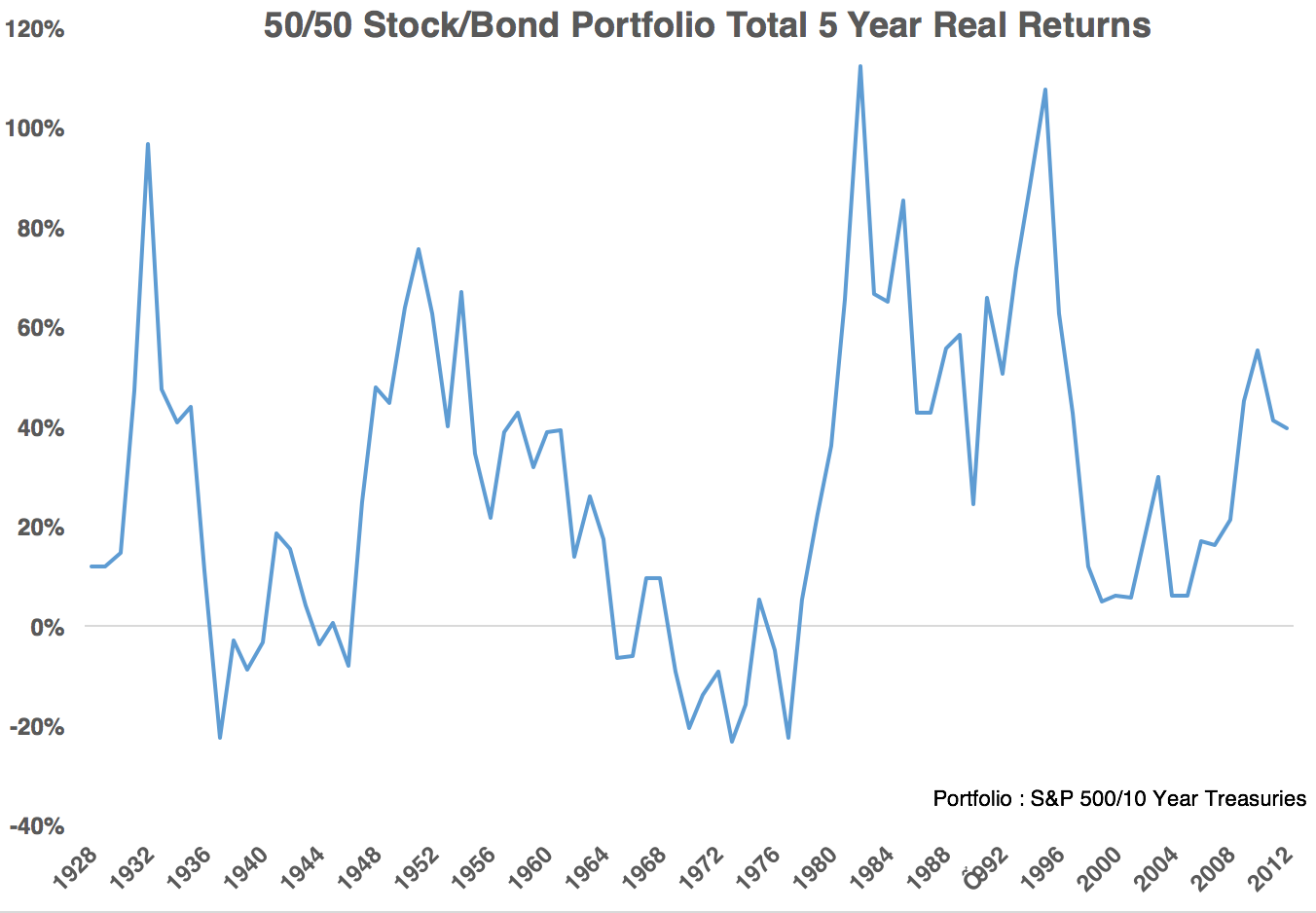 You can see how real returns went negative in the 1970s during a period of rising rates and high inflation. Because of the way bonds are structured (pre-set maturity dates and income schedules) their biggest threat, in the long run, is inflation.

Predicting that stocks and bonds will crater at the same time misses one simple fact of the markets — investors have to allocate their capital somewhere. In terms of asset allocation, that means stocks, bonds, cash, or something else (alternatives, real estate, real assets, coins, stamps, Beanie Babies, etc.).

It’s possible that investors lose faith in both stocks and bonds and want to move to cash but I just don’t see the trigger for something like that beyond an enormous rise in interest rates and/or inflation over a very short period of time that dings both bonds (rates up/bonds down) and stocks (inflation up/earnings down).

Typically when stocks experience a large drawdown, investors exhibit a flight to safety and turn to high-quality bonds. And even if rates were to rise cash yields are so low that they would have to come up substantially from current levels to get enough bond investors to turn to cash to have an impact.

You can never rule anything out in the markets because they are unpredictable. But it would seem to be a low probability event for stocks and bonds to both get crushed during the next crisis. Both could certainly fall together but it would be tough to see both go into a bear market at the same time.