It’s easy to put it in the back of your mind when it seems like all stocks do is rise but it’s a question of when, not if, the next bear market will hit. No one can predict when they will strike but periods of rising stock prices are eventually followed by periods of falling prices. That’s how these things work. The goal is to be prepared before it happens, not after. Here’s a piece I wrote for Bloomberg on how to think about risk during the inevitable bear market.

Every day since President Donald Trump took office seems to bring a new political shock, so you might be surprised to learn that the stock market is just shy of all-time highs.

The new president may be unpredictable, but that volatility has yet to spill over into the financial markets. But remember, regardless of the president, there’s a high probability that investors will see a bear market during a commander in chief’s time in office. Bear markets are a natural outcome of a complex system such as the stock market, which is driven by emotions that can often take things to the extremes.

It’s no fun worrying about bear markets when we are close to all-time highs, but we should prepare for a downturn before it occurs, not after it’s already underway. 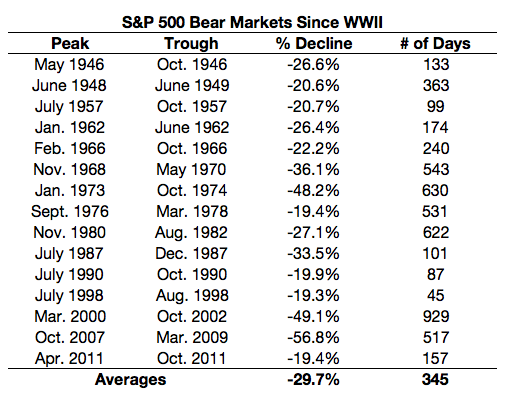 On average, these bear markets lasted almost one year, and stocks fell almost 30 percent. It can also take some time to break even in stocks after a bear market. The longest break-even period in this time frame was after the 2000-2002 bear market, when it took five years and eight months for an investor to recover from the previous peak. After the recession of 2007, it took four years and five months to make your money back.

An average bear market would take the S&P 500 down to about 1,600 from the current 2,300 level. That would surely be a tough pill to swallow, but it only takes us back to where we were in mid-2013, not exactly the end of the world.

Assuming you are a long-term investor, you need to have other asset classes to keep you afloat and sane during these severe market downturns. This is what high-quality bonds are made for. The following table shows how intermediate-term bonds performed over these same bear markets: 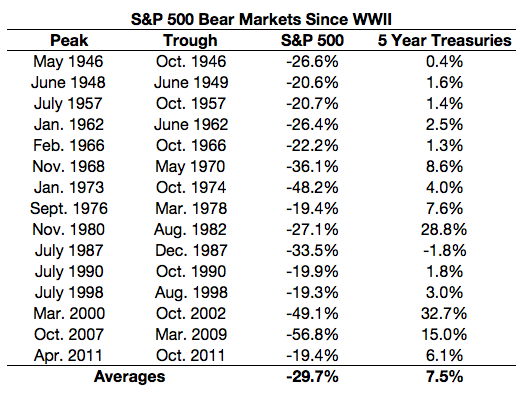 You can see that bonds have done their job by protecting investors during large stock-market meltdowns. Out of all 15 bear markets on this list, there was only one instance when bonds fell, and even then it was a minor -1.8 percent loss in the short but harsh 1987 crash in stocks. Intermediate-term bonds were up an average of more than 7 percent, earning a spread of more than 37 percent in outperformance over stocks during a bear market.

One of the few guarantees you have as an investor is that things are bound to go wrong in the future. Human nature all but ensures that this will be the case. But this also makes it very difficult to predict when the next bear will strike. All of the data in the world on valuations, fundamentals, technicals, geopolitical events and sentiment can’t help you predict the precise moment other investors will collectively decide it’s time to panic.

History can provide a blueprint for the way things usually play out, but it’s worth remembering that every cycle is different. The pendulum swing from euphoria to panic can play out over many years — as it did from 2000 to 2002 — or it can happen in an instant — as it did in 1987. All investors need to have a backup plan, because the markets rarely cooperate and unfold exactly as you wish. People are repeatedly shocked by what happens in the markets because they don’t plan ahead.

Most investors mistakenly assume that you make all of your money during bull markets. Successful investors understand that you make real money by surviving bear markets. The best way to prepare for severe market disruptions is to anticipate how you’ll react when they happen, and then faithfully follow that plan no matter what happens next.

*The technical definition of a bear market is a drawdown of 20 percent, but this is an arbitrary number, so I’ve included the four times that stocks have fallen 19 percent in this period.