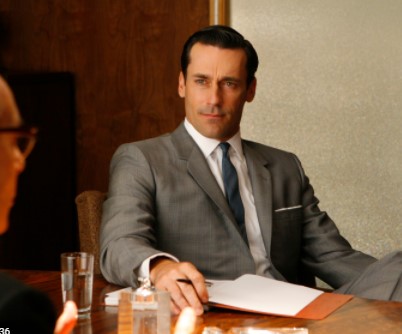 It’s basically impossible to discover new TV shows, music or movies before anyone else these days because everything is dissected immediately by some corner of the Internet, social media or podcast world.

But back when Mad Men came out in 2007 my wife and I were into the show before it became a huge success.1 I wore this as a badge of honor as people eventually played catch-up on Netflix. It remains one of my favorite shows of all time.

The star of the show, Jon Hamm, took some time to find his own success as well.

Hamm was 36 when he got cast to play the ever-mysterious Don Draper. Despite being a struggling actor for many years before finally hitting it big, Hamm credits finding success later in life with his ability to cope with his newfound fame:

I think if you find crazy success at a very young age, then it can be quite dangerous. The road to celebrity is littered with people who got too much too soon and weren’t equipped to handle it.

He also claims this helped him manage his spending and finances better:

I didn’t go crazy and buy some plane or anything nonsensical. Because I’m really not, that’s not my thing. I don’t love stuff. I have too much of it and it kind of just accumulates and gets in the way. So I’ve just kind of tried to definitely put some of it away for a rainy day and then try to make life more comfortable.

Bill Murray once said, “I always want to say to people who want to be rich and famous: Try being rich first.” In many ways, getting rich overnight is much like becoming famous overnight.

A newly minted tech millionaire wrote an anonymous piece for the New York Magazine called Confessions of an Overnight Millionaire. The article says since this past summer almost 750 companies have gone public raising more than $200 million. This has minted thousands of new millionaires. Throw in all of the early adopters of crypto and you have young people who have made more money in a short period of time than most people will make in a lifetime.

The woman who penned the piece came into more than $6 million when her tech company went public. She initially assumed her stock options would be worth a couple hundred thousand dollars. Again, a good problem to have but now she’s dealing with all sorts of new worries:

I’m not a private person, but this money feels offensive to talk about with other people. My roommate does much more noble work — he works in health care — and his job doesn’t have windfall potential. He’ll say, “I’m never going to be that rich.” He would never bring that up except when I talk about how I’m becoming rich.

One of the main problems with overnight riches is you don’t have time to acclimate with your newfound wealth and neither do your friends or family.

Most normal people slowly build wealth over the course of their lifetime by periodically saving over many years. This gives you time to adjust as income and wealth grow over time. People who come into fast money don’t have that same adjustment period so while it can be fun to dream about, not everyone can handle everything that comes with it.

I don’t have specific advice for overnight millionaires as much as some questions to guide your actions if you’re lucky enough to be dealing with a life-changing amount of money:

I have not heard of anyone going ham. This is a new, new generation of money. We all grew up in the recession, and people are freaked out by the pandemic — everyone knows someone who lost their job. We’re the first generation in a long time that will have an average net worth less than our parents’. So even if you’re doing really well, it’s much more in your face, the distance you can fall. I think about Yahoo constantly. Yahoo in the ’90s was the darling company, and now I don’t know if it exists. Netscape is another example. AOL. There are so many businesses that don’t exist or are worthless. It would be disastrous to frivolously spend this money; it would be assuming it’s going to keep coming.

You can’t possibly hope to offer someone financial advice without first understanding how they view things like risk, spending, saving and the emotions that come about from difficult money decisions.

Who do you want to surround yourself with? As someone who works in the financial services industry, this part of the story was fascinating:

I’ve been interviewing wealth managers, and honestly I couldn’t be less impressed. If I were a wealth manager, I’m exactly the client I would want. I’m young, and I could be a client for 50 years. So these people should be thirsty, but they’re not. The wealth-management firms are old school — I don’t think they’re designed for people like me. I was video-chatting with one guy, and he didn’t know how to do a screen-share properly, so he was showing his entire screen, including windows that I probably shouldn’t have seen. And I was like, I’m going to trust you to oversee my millions?

There are things that rich people do, and hiring someone to manage your money is one of them. I’m wondering, Is this something rich people do because other rich people are doing it? Is this industry a farce?

She is so right about the potential for being a client for decades. This is why many of the young and wealthy are seeking out advisors who are their peers. That’s not to say older advisors can’t understand younger clients but most young people aren’t impressed by the name on the door like previous generations.

How many times do I want to get rich? Elon Musk founded SpaceX and Tesla after making a ton of money on Paypal. Jeff Bezos founded Amazon after a stint at a hedge fund. These guys got rich once and then got insanely rich again using their initial riches as a springboard.

Most people aren’t Elon Musk or Jeff Bezos though. It’s worth understanding how much of your newfound wealth you’re willing to risk to chase your dreams or further riches.

Do I understand the difference between getting rich and staying rich? The old saying is you get rich by concentrating but you stay rich by diversifying.

Going from building wealth to preserving wealth is a complete change in mindset. Rule number one when dealing with vast amounts of money is this: don’t screw things up.

Josh and I talked about what we would tell overnight millionaires and more on this week’s What Are Your Thoughts:

Further Reading:
What Should I Do With My Inheritance?

1We even dressed up a Don and Betty Draper for a Halloween party. Basically, no one had a clue who we were supposed to be.