Higher than average U.S. stock market valuations and lower-than-average interest rates would lead any rational individual to assume that future market returns should be lower than average from current levels. This is a reasonable assumption when you consider a simple 60/40 U.S. stock/bond portfolio has just had one of the best five year runs in history.

According to the National Association of State Retirement Administrators (NASRA), pension plans are still feeling pretty good about their prospects for future returns: 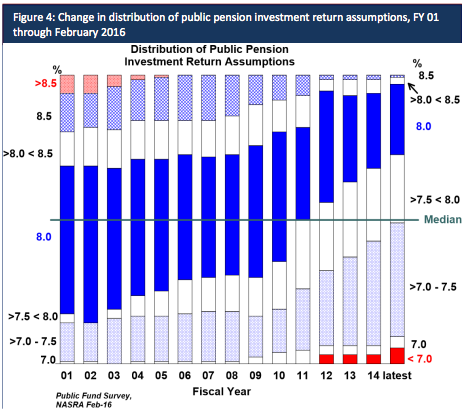 You can see that the numbers are slowly coming down, but the current average annual return assumption for public pension plans is still at about 7.6%. Based on the latest NASRA survey data, just 5% or so of these pensions assume returns will come in below 7% annually.

I’ll take the over on that one.

The reason pension return assumptions are so important is because pension plans have a defined liability — the payouts to their beneficiaries. Since they have a good understanding of what their future liabilities will be, the trick is to figure out a current mix of assets to help ensure those payments can be made in the future. Any shortfall would need to be made up for by current contributions or potentially reduced benefits in the worst case scenarios.

My friend Amit Sinha has been working with pension plans for a number of years in order to help them match their assets with their liabilities. In a recent post he discussed the high cost of high expected returns for pensions:

Pension plans are generally allowed to select what rate they would like to discount their future obligations in order to determine liabilities. Selecting the appropriate discount rate has real economic and political decisions tied to it, and choosing a discount rate that makes liabilities look smaller plays into our human behavioral biases.

The simple math behind this equation is that a higher discount rate — meaning higher expected returns — leads to lower current liabilities. Here’s a handy graph Amit produced to explain: 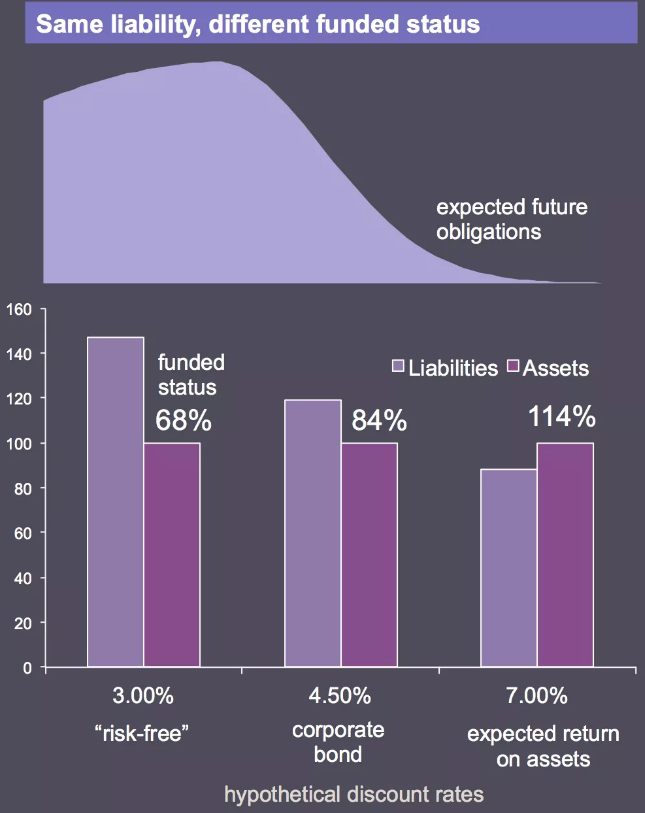 The easiest way to ensure that you don’t have to make additional pension contributions is to increase your return assumptions. There are political ramifications because states and municipalities are the ones who have to budget how much money to add to these plans each year. The problem is that higher expected returns don’t always lead to higher actual returns. Many of these pension plans are probably out of their minds if they think they’re all going to return 8% a year with a broadly diversified portfolio. Those future liabilities aren’t going away if and when expected returns don’t come to fruition.

Amit has a more nuanced way for pensions to look at their potential issues with their funded status:

A more stable exercise might be to stick to a standard method of valuing liabilities, lets say using a risk-free discount rate. Funded status becomes the result of Value of Assets / Value of Liabilities. The pension plan can calculate how much better / worse off that number they would be based on scenarios or expected return assumptions that they want to use for their assets. Effectively, you would separate your asset return assumptions from liability discounting.

In an interview with Sal Khan of Khan Academy, Eric Schmidt of Google spoke about how Google conducts meetings – they first put the facts on the table, and then they start the debate on what to do given the facts. If we obfuscate the facts that are presented, its hard to move forward and have a quality debate.

Therefore, lets put the numbers as they stand on the table, and then make our investment decisions following that.

Pension plans are relying far too heavily on their liability discount rates to make their decisions. Many pension plans are in denial and simply hoping to be bailed out by higher market returns. That’s certainly a possibility, but you never want to be completely beholden to the markets to reach your goals. You always have to plan for a wide range of outcomes and worst case scenarios.

Effectively, many of these pensions are making return assumptions based not on reasonable market return expectations, but based on their current or future spending needs and their willingness (or lack-thereof) to put in additional funds. The higher the assumed rate of return, the lower the value of the liabilities and thus the less money they have to put into the fund each year through contributions. Eventually this will catch up with those plans that are under-funded and have lofty return expectations.

When higher return assumptions lead to lower contributions this leads to a higher risk strategy and the end result is no margin of safety in their overall plan. Risk can only be pushed so far out into the future before you have to start addressing the underlying problems. It appears far too many pension plans have no margin of safety built into their assumptions. The simple math will catch up with them at some point and difficult decisions will have to be made.