If I had the power to go back in time and tell the past version of myself from ten or fifteen years ago about Twitter I don’t think I would be able to explain it to myself. It’s one of those things that really makes no sense until you get a feel for it and gain some experience utilizing it the right way.

In lieu of a perfect explanation, here are ten of my favorite things about Twitter:

1. Access to intelligent people. You can create your own research department with Twitter in basically any subject imaginable. There are experts on sports, investing, pop culture, politics, foreign policy, movies and the list could go on. Many of them are even more than happy to reply to a well thought out question or comment.

2. Random acts of wisdom. Sure, the majority of tweets are bad puns, dad jokes and comments on people’s fantasy football teams. But every once and a while you’ll be lucky enough to find yourself on the receiving end of a profoundly wise statement or two, like the following from Jason Zweig: 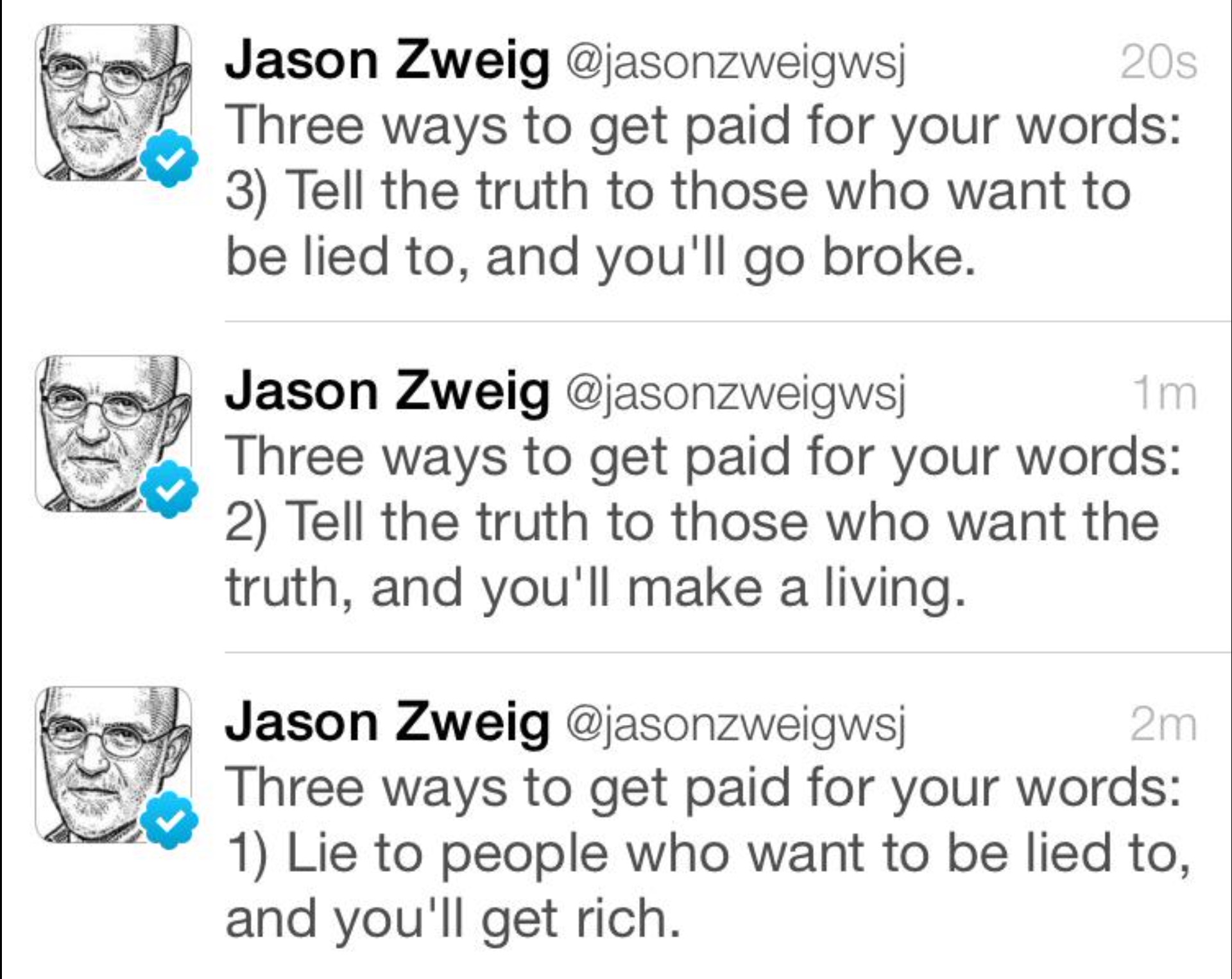 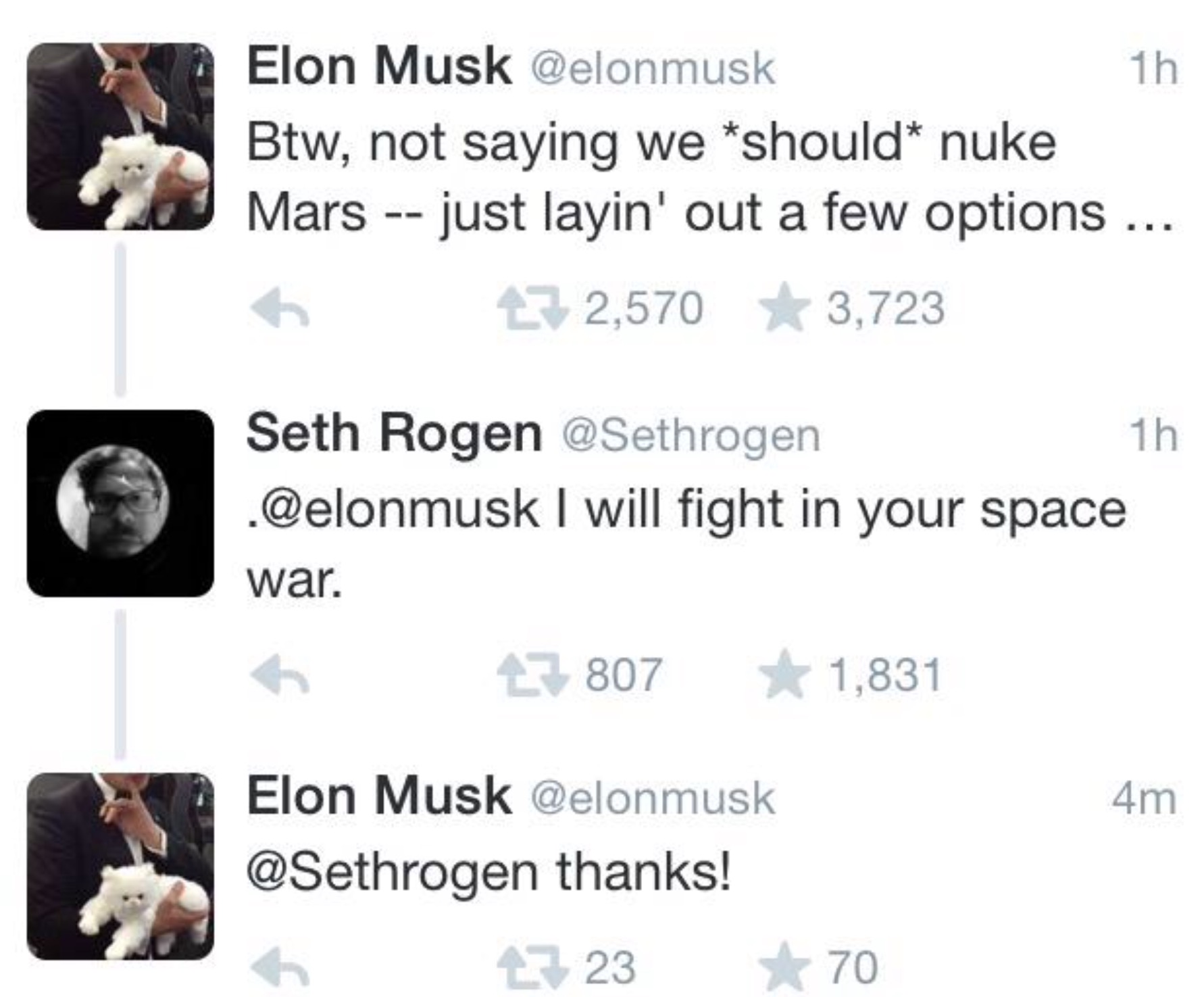 4. Social media friends. I’ve made a ton of social media friends through Twitter. Many I’ve talked with or even met in real life. ‘Hey, don’t we follow each other on Twitter?’ is a conversation I’ve had multiple times in the past couple of years, which is another thing that would have made absolutely no sense to past-me in my Back to the Future fantasy.

5. Being a fly on the wall of intelligent conversations. I was on Twitter for a few years before I started blogging. I never tweeted or interacted with anyone in that time, but I still found a ton of value in following intelligent or interesting people. Being able to follow along with conversations, healthy debates and witty banter can be very useful, whether you’re participating or not.

6. It’s my news feed. I used to have a bunch of go-to websites or TV stations for my news updates. Now my first stop is always Twitter. It’s not always reliable, but Twitter is the best source of breaking news available today and it’s not even close. By the time the news gets to a website or even a 24-hour news network it’s already been talked about for some time on Twitter.

It’s also great for sports highlights. When I was younger I would have to watch an entire hour-long SportsCenter to see a 30-second clip of a game or play I may have missed. Now it’s on Twitter 30 seconds after it happened.

7. @AwardsDarwin. This feed makes me laugh out loud at least once a day. Follow them and thank me later.

8. Access to thousands of devil’s advocates. To be truly informed you have to be willing to look at the other side at all times, even if you don’t agree. Finding intelligent people out there that you don’t necessarily agree with is a great way to keep yourself honest. Everyone should have at least a handful of hate-follows on Twitter.

9. Finance Twitter. This group mainly operates when the financial markets are open. The craziest thing about these market junkies (myself included) is that they all seem to understand each other when most outside observers would assume they’re speaking gibberish. For example, a breaking finance news story or market-moving event will occur, and without skipping a beat, Finance Twitter springs into action with an immediate onslaught of analysis, cheesy puns, and commentary even though no one really explains exactly what they’re referring to. It’s both impressive and kind of scary.

10. You’re in control. I have a social media confession to make — I’ve never been on Facebook in my life. Never created an account. Never even visited the website. It got big a couple years after I was out of college and I think it just missed me. I was never that interested in it. It’s an absolutely massive website, so maybe I’m nuts for staying away from it.

It wasn’t a conscious decision I made, but I guess the biggest reason I’ve chosen Twitter over Facebook is because it gives you the freedom to pick and choose who you follow or interact with. Facebook will always be more popular, but my sense is you don’t have that same type of control on Facebook. It remains to be seen if Twitter’s leaders will be able to turn it around as a publicly-traded company like Facebook has.

Regardless I still find it to be a useful service. Can it be a giant, outrage-filled waste of time? Of course. Just like everything else on the Internet (and in life), you can choose to make the most of it or you can choose to waste your time.

Further Reading:
The Cast of Characters on Finance Twitter