The index investing revolution has made it abundantly clear that many investors are now starting to understand the zero sum nature of active management and the huge hurdle that high fees can present in the fund world.

These stats that show the percentage of funds that underperform their benchmarks are commonly known and cited by many people in the asset management world as exhibit #1 in the case of active versus passive (via the SPIVA Scorecard): 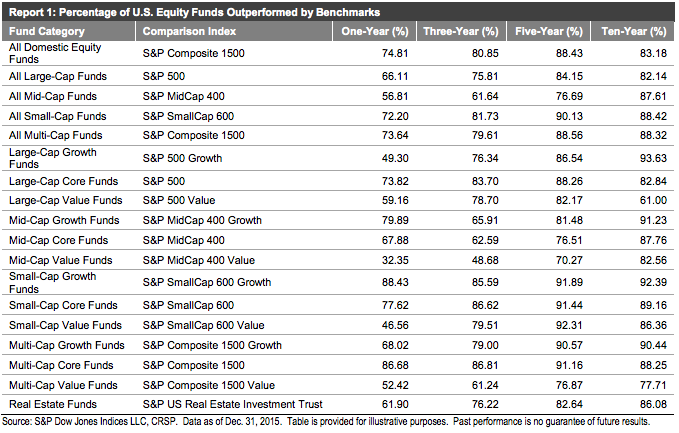 Exhibit #2 shows the average performance across a number of different fund categories: 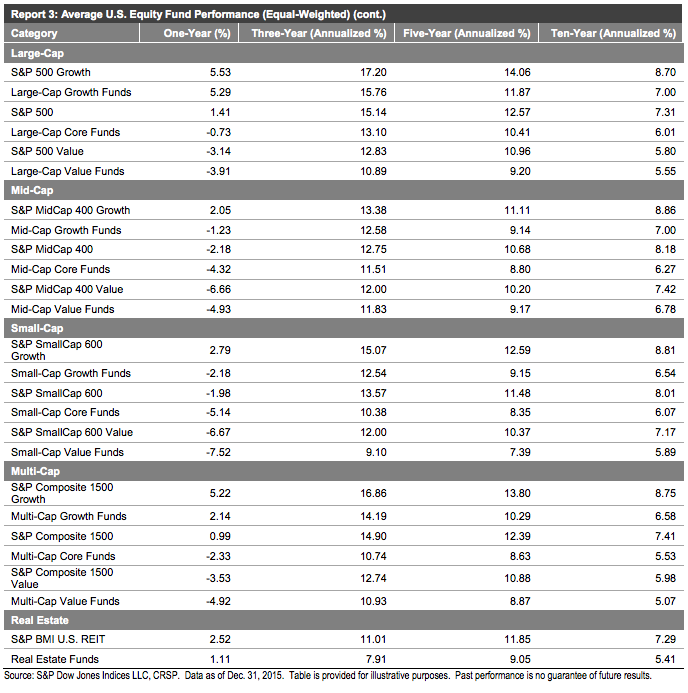 There are 13 fund categories in this table. I took the average of each benchmark and fund category to get an overall average return for the entire group:

Add a very low cost to each of these categories and you can see why indexing continues to gain in popularity. Beating the market is hard.

But here’s the point that many people are missing in this discussion — the returns for the active mutual fund category are still pretty decent from an absolute perspective over each of these time frames. Sure, overall they lose out on a relative basis to the market indexes, but if you were in the average active U.S. equity mutual fund over the past 5 years, you still earned close to 10% a year.

Even mediocre, underperforming actively managed funds would have grown the value of your portfolio. It’s obvious that costs matter, especially when they are compounded over a number of years, but there are many aspects of portfolio management that can trump costs.

The biggest issue for most investors has not been the active vs. passive debate or investment costs — it’s been those who have latched on to the pessimistic parade of charlatans who have kept people out of the markets with scare tactics and fear mongering. Being out of the market for the past 7-10 years has been far more damaging that any difference in mutual fund fees.

The drumbeat of negativity — persistent calls for double dip recessions, market crashes and the end of the financial system as we know it — has been nearly endless during this market recovery. And the pessimistic case will always sound more intelligent than optimism because we have such an aversion to losses. Many investors have fallen into the trap of believing conspiracy theories and assuming that any economic or market gains we’ve seen must be fake. I understand that lots of people were scared out of their minds by the financial crisis. It’s easy to look back in hindsight on the gains we’ve seen and forget how crazy things got in 2008.

The problem is that many people have never gotten out of the bunker mentality since then. There have been plenty of brilliant investors and pundits who have been dead wrong about the market for years to the detriment of those who have listened to them. And they assume that they’ll just wait for the next crash to get back into the market when the coast is clear. I’m skeptical that those who have missed this entire ramp up in the markets will have the courage to put their cash to work when the next bear market does rear its ugly head. There’s always a good reason to stay on the sidelines once you’ve been there for so long. The perma-crowd will always find more reasons to wait things out.

It’s possible that this could be one of the strongest bull markets some investors will see in their lifetimes. These types of gains don’t come around too often and are promised to no investor.

Even being invested in a mediocre fund would have given you pretty great annual returns over the past 3 and 5 years. It was far more destructive to sit in cash the entire time because you were still nervous about the financial crisis.

A poorly-timed asset allocation decision can be far more harmful to your returns than the decision between active and passive funds. Costs matter, but not nearly as much as discipline.

Further Reading:
The Lingering Effects of the Financial Crisis