The bond bull market in the U.S. is now closing in on 40 years. That’s 40 years of declining government bond yields. As of this writing, treasuries are yielding a high of less than 1.5% (30 year maturity) to a low of less than 0.2% (3-month t-bills).

The Fed has already promised they will keep short-term interest rates effectively at 0% until at least 2022.

Mortgage yields continue to hit new all-time lows because of this: 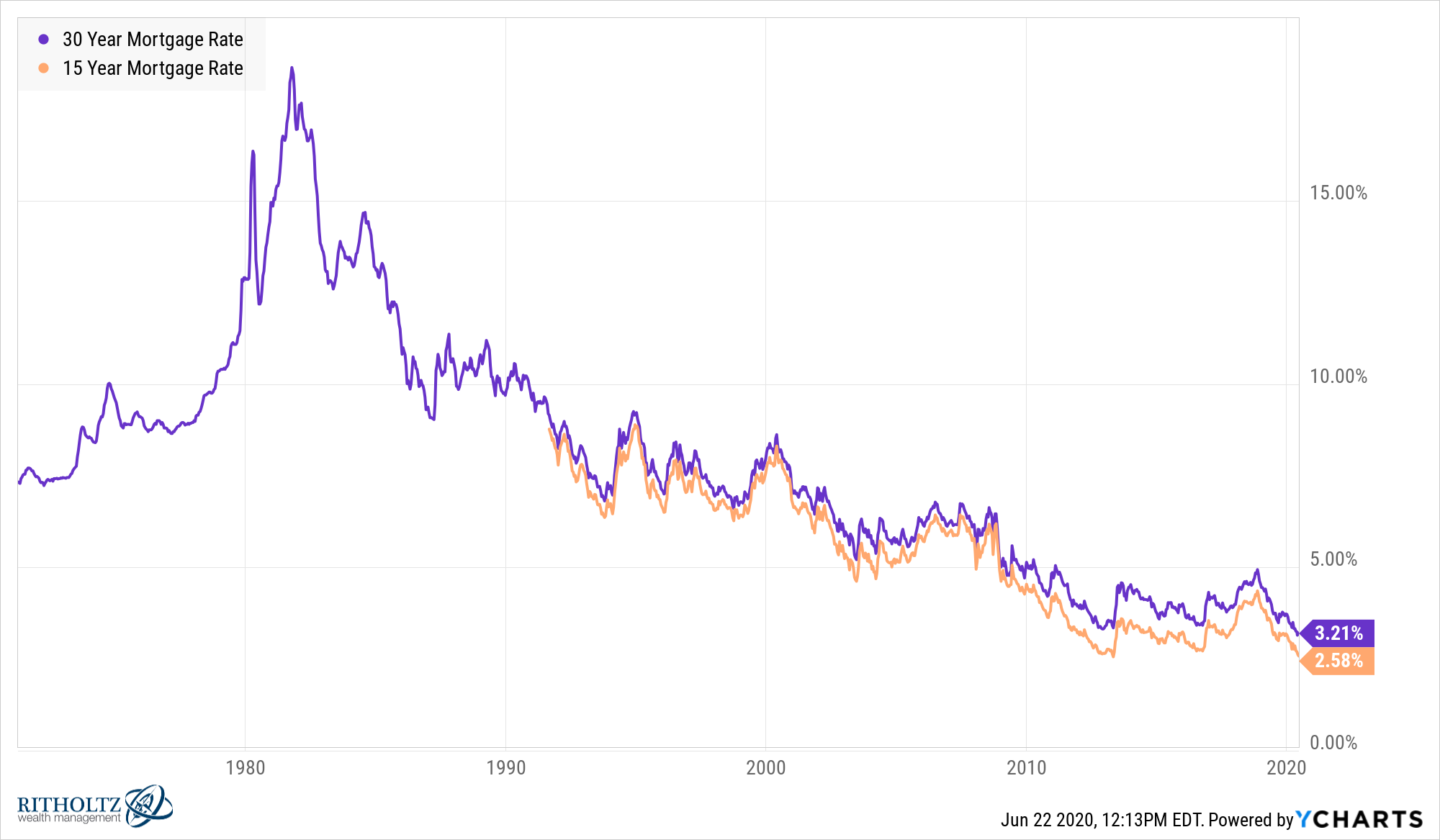 Auto loan rates are a tad higher but are much lower than they’ve been historically:

Basically every interest rate you can think of has fallen except for one — credit cards: 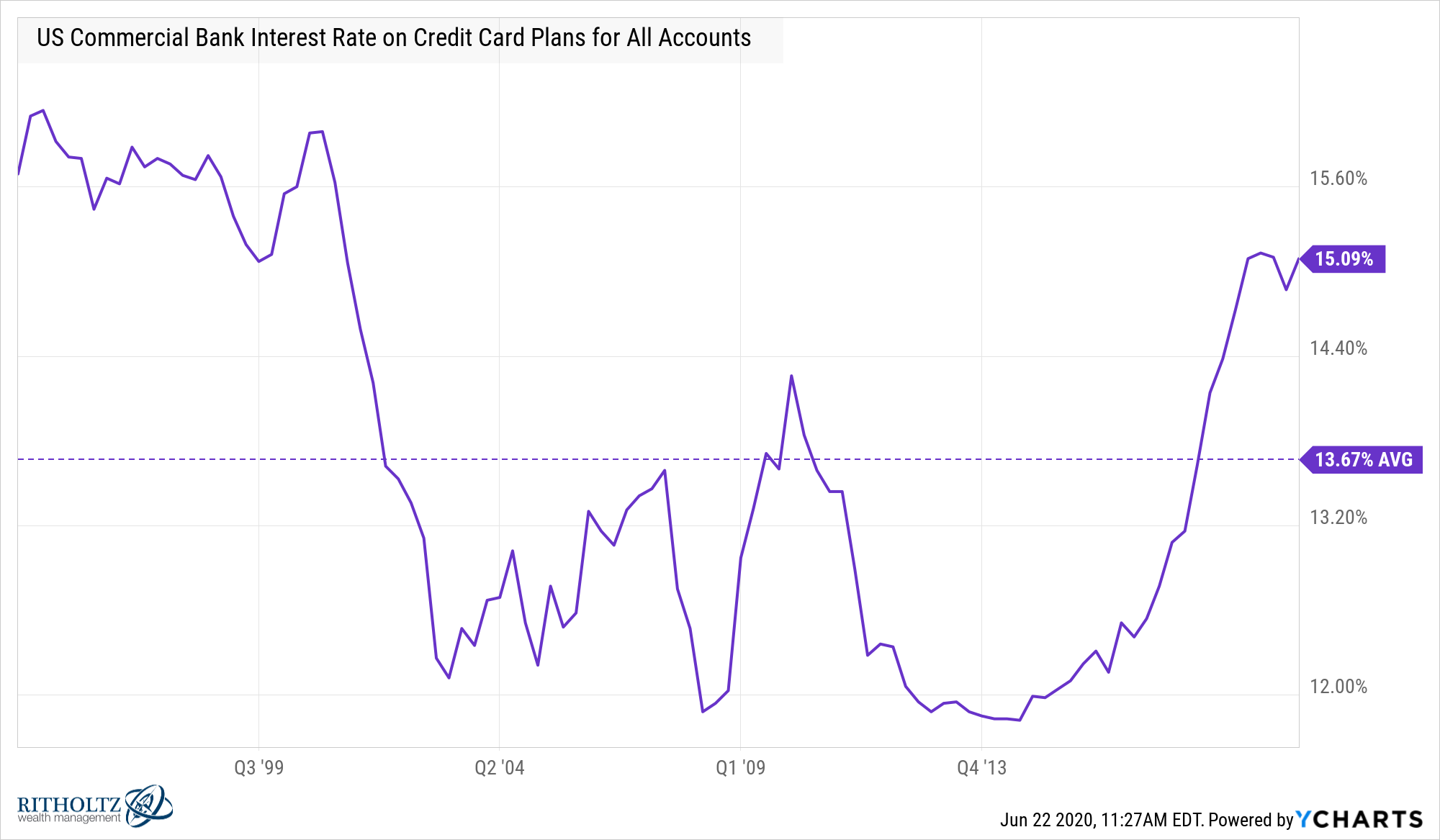 There are a number of reasons people point to for the stickiness of credit card rates:

I understand all of these reasons and the fact that its unsecured debt is the one that makes the most sense. But this doesn’t tell the whole story. For one thing, the delinquency rates of credit card loans have actually come down a lot in recent years as consumers fixed their balance sheets following the financial crisis:

The other reason credit card rates remain so high has to do with plain old inertia. The banks have always charged high rates on credit cards so that’s what they’ve continued to do. Because that’s the way we’ve always done this is about as good of a reason as any when you’re dealing with entrenched ideas.

Surprisingly, in the early days of banking, the banks were reluctant to offer much consumer credit because they knew it could be dangerous and wanted to protect people from financial peril.

The rise of the middle class in the 1950s did away with this notion fairly quickly when people decided they would spend money they didn’t have just yet. From 1958 through 1990, there wasn’t a single year when outstanding consumer debt wasn’t higher than it was the year before.

The growth in credit cards was a big reason for this.

Bank of America was the first large bank to understand this shift in spending patterns. After witnessing a 700% increase in installment loans following World War II, they began testing out the BankAmericard.

The BankAmericard initiative was implemented by a man named Joseph Williams, who came up with the idea for how to set credit card interest rates by looking at previous versions by individual companies. Joe Nocera explains how this worked in his book A Piece of the Action:

Williams had friends at Sears and Mobil Oil, and those friends secretly allowed his team to observe their credit operations. Out of this latter research, incidentally, came a number of the standard features of credit cards, features that have remained remarkably unchanged to this day. The idea of a one-month grace period, a time during which customers could pay off their balances without facing interest charges, emerged from that research, as did the idea of charging 18 percent a year on credit card loans—a figure that would be seemingly set in stone for the next thirty years, even as every other manner of interest rate fluctuated wildly. There was no black magic involved: The bank just assumed that if a one-month grace period and a monthly interest charge of one and a half percent (which amounts to 18 percent a year) was good enough for Sears, with its fifty years of credit experience, then it was good enough for the Bank of America.

This card was mailed out to people all across the country in what was basically the first mass-produced consumer credit card. And Bank of America set their rate based on credit terms Sears had applied in the past.

One of the reasons those high rates hung around is because Williams underestimated the consumer’s willingness or ability to pay off their balance each month. He initially assumed just 4% of card users would fall behind on their payments.

The actual delinquency rate in that first batch of cards was 22%. The bank didn’t bother setting up a collections department because they were convinced they wouldn’t have to worry about collecting on their loans. Nor did they create any contingencies for fraud, which immediately ran rampant.

Which meant Bank of America lost close to $20 million in the first year or so of large scale credit card operations, which was real money in the 1950s. Williams, the architect of the BankAmericard, resigned shortly after these losses materialized.

Total credit card debt outstanding in the U.S. is now just shy of $1 trillion. On the new season of Against the Rules, Michael Lewis estimates the credit card companies make roughly $100 billion a year on late fees and interest charges.

That’s a pretty good business. And business is so good from other fees paid by vendors that credit cards are able to offer incentives to those who don’t even pay interest charges in the form of rewards points for cash, travel, shopping, etc.

There are a lot of policymakers trying to figure out ways to make life easier on people’s finances as we navigate this crisis.

One way to alleviate financial strain on a number of consumers could be finding a way to lower credit card rates to more reasonable levels.

Does it make sense those rates are higher than other forms of borrowing?

Does it make sense that those rates haven’t budged at all even in the face of falling rates elsewhere?

I don’t think so.