“Fear has a greater grasp on human action than does the impressive weight of historical evidence.” – Jeremy Siegel

If I had to narrow down the list of reasons that so many investors have missed out on one of the greatest bull markets in history it would be these two factors:

Nearly the entire run-up stocks investors have been warned of double-dip recessions, a stagnating economy and high rates of unemployment.  This can take its toll on investors that are unaware of the fact that the stock market is not the economy.

In fact, just five days before the stock market bottomed in March of 2009, the Wall Street Journal ran an op-ed with the following headline:

It was a scary time.  The word depression was being thrown around quite a bit during those dark days.

Many investors simply can’t force themselves to grasp that these periods of unrest are the absolute best times to put your money to work in stocks (although you’ll never be able to perfectly nail the bottom).

The unemployment rate is a perfect example of the fact that the best times to invest are when things seem the worst.

Here’s the unemployment rate going back to 1960: 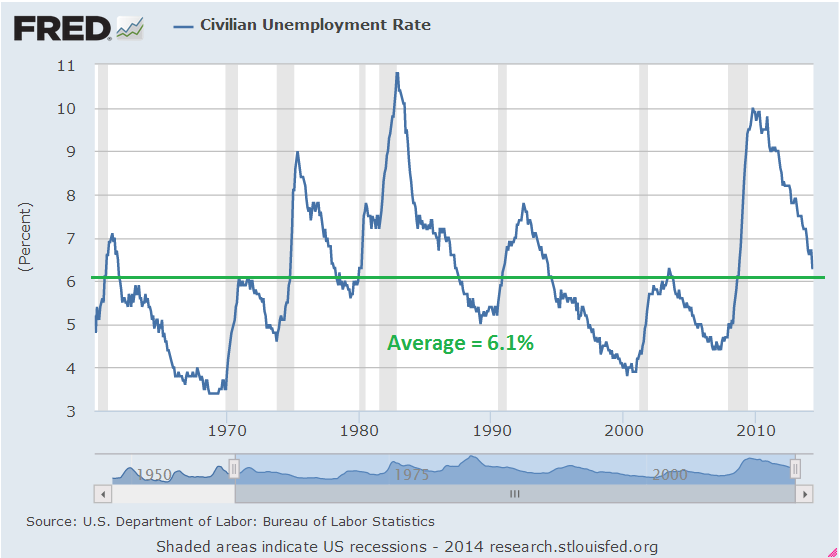 The rate is never really stable but you can see that we’re actually approaching the long-term average with the latest reading.

I looked at the performance of the S&P 500 during all of the periods that stocks were above the long-term average, roughly 40% of the time, and compared them to the below average periods.  Here are the results:

Next, I broke down these numbers even further so you can see the relationship between terrible economic data and stock market returns:

From a contrarian point of view these numbers make sense, but intuitively they’re hard to grasp.  It’s difficult to imagine a scenario that involves poor economic conditions along with a rising stock market, but it happens more often than you’d think.

Since 1960 we’ve had eight recessions lasting an average of just under twelve months a piece.  That means every six years or so economic activity contracted.

What most investors fail to realize is that the times that seem the bleakest are also when the expectations are the lowest.  It becomes a relative game.  Even if the data is still terrible on an absolute basis, when things start getting less worse it can actually lead to better performance.

The opposite can also be true that when things seem great on an absolute basis, but aren’t improving at the same pace, we can see the market deteriorate.

Also, there are structural issues that could cause the unemployment rate to stay elevated for a number of years.  It’s difficult to say if the same range will be seen going forward.

Yet it’s still true that expectations matter with forward-looking markets. This is why the best time to invest is when assets are beaten down in price with low future expectations as opposed to those times of sky-high expectations and large price increases.